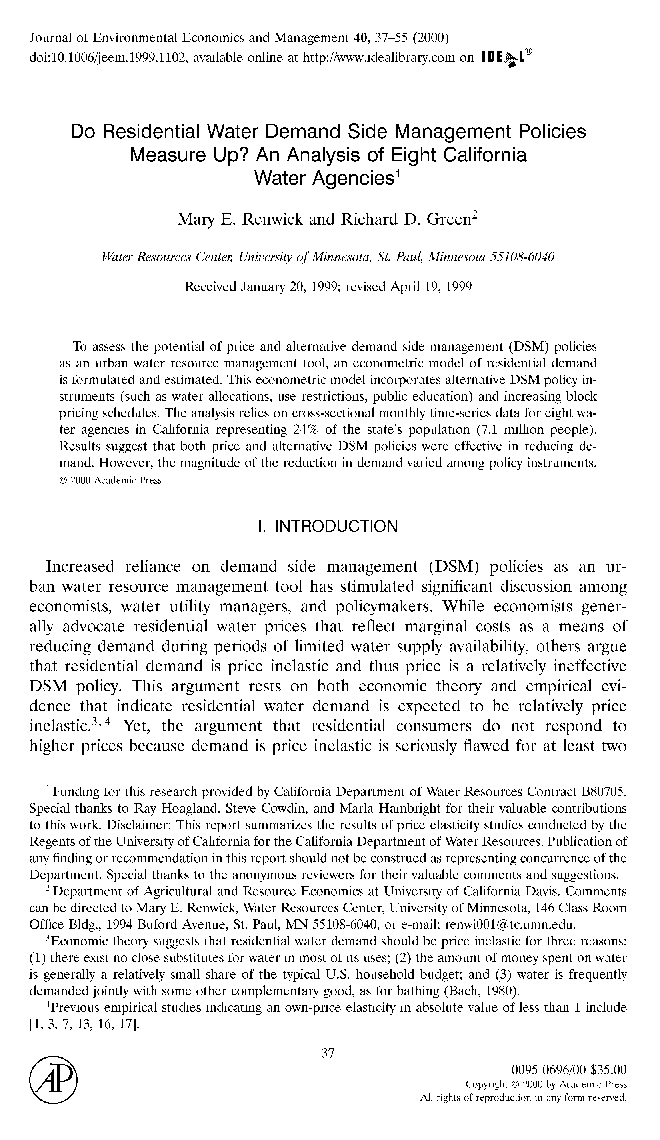 To assess the potential of price and alternative demand side management (DSM) policies as an urban water resource management tool, an econometric model of residential demand is formulated and estimated. This econometric model incorporates alternative DSM policy instruments (such as water allocations, use restrictions, public education) and increasing block pricing schedules. The analysis relies on cross-sectional monthly time-series data for eight water agencies in California representing 24% of the state's population (7.1 million people). Results suggest that both price and alternative DSM policies were effective in reducing demand. However, the magnitude of the reduction in demand varied among policy instruments.

Increased reliance on demand side management (DSM) policies as an urban water resource management tool has stimulated significant discussion among economists, water utility managers, and policymakers. While economists generally advocate residential water prices that reflect marginal costs as a means of reducing demand during periods of limited water supply availability, others argue that residential demand is price inelastic and thus price is a relatively ineffective DSM policy. This argument rests on both economic theory and empirical evidence that indicate residential water demand is expected to be relatively price inelastic.3, Yet, the argument that residential consumers do not respond to higher prices because demand is price inelastic is seriously flawed for at least two ' Funding for this research provided by California Department of Water Resources Contract B80705. Special thanks to Ray Hoagland, Steve Cowdin, and Marla Hambright for their valuable contributions this work. Disclaimer: This report summarizes the results of price elasticity studies conducted by the Regents of the University of California for the California Department of Water Resources. Publication of any finding or recommendation in this report should not be construed as representing concurrence of the Department. Special thanks to the anonymous reviewers for their valuable comments and suggestions. 'Department of Agricultural and Resource Economics at University of California Davis. Comments can be directed to Mary E. Renwick, Water Resources Center, University of Minnesota, 146 Class Room Office Bldg., 1994 Buford Avenue, St. Paul, MN 55108-6040, or e-mail: renwiOOl@tc.umn.edu. 'Economic theory suggests that residential water demand should be price inelastic for three reasons: (1) there exist no close substitutes for water in most of its uses; (2) the amount of money spent on water is generally a relatively small share of the typical U.S. household budget; and (3) water is frequently demanded jointly with some other complementary good, as for bathing (Bach, 1980). 4Previous empirical studies indicating an own-price elasticity in absolute value of less than 1 include [l, 3, 7, 13, 16, 171. reasonss In addition, some advocates of non-price policy have argued that “the use of price as an allocation mechanism is constrained by the fact that water is generally regarded as a basic necessity, even a right, not an economic good” [2]. The problem facing water utility managers and policy makers is a lack of adequate information to determine the potential performance of price and alternative nonprice DSM policies in their communities. While water utility managers frequently adopt a combination of price and alternative DSM policy instruments, particularly during periods of limited supply availability, most previous economic analyses of residential water demand have ignored the effect of alternative DSM policies.6 Alternative “non-price” DSM policy instruments-those that do not affect the price of water-include public education campaigns, rationing, water use restrictions, and subsidies for adoption of more water-efficient technologies. Failure to account for the influence of non-price DSM policies on demand when both price and non-price policies have been implemented may result in an overestimate of the price responsiveness of water demand. To assess the potential of price and alternative DSM policy instruments to reduce demand, an econometric model of residential demand for water is formulated and estimated using a two-step estimation framework. This econometric model explicitly incorporates alternative non-price DSM policies, endogenous block pricing schedules, and a harmonic model to separately capture the effects of seasonality and climatic variability on demand, improving upon earlier specifications [lo, 11, 131. The analysis relies on agency-level cross-sectional monthly time-series data over an 8-year period for eight urban communities in California, representing 7.1 million people.