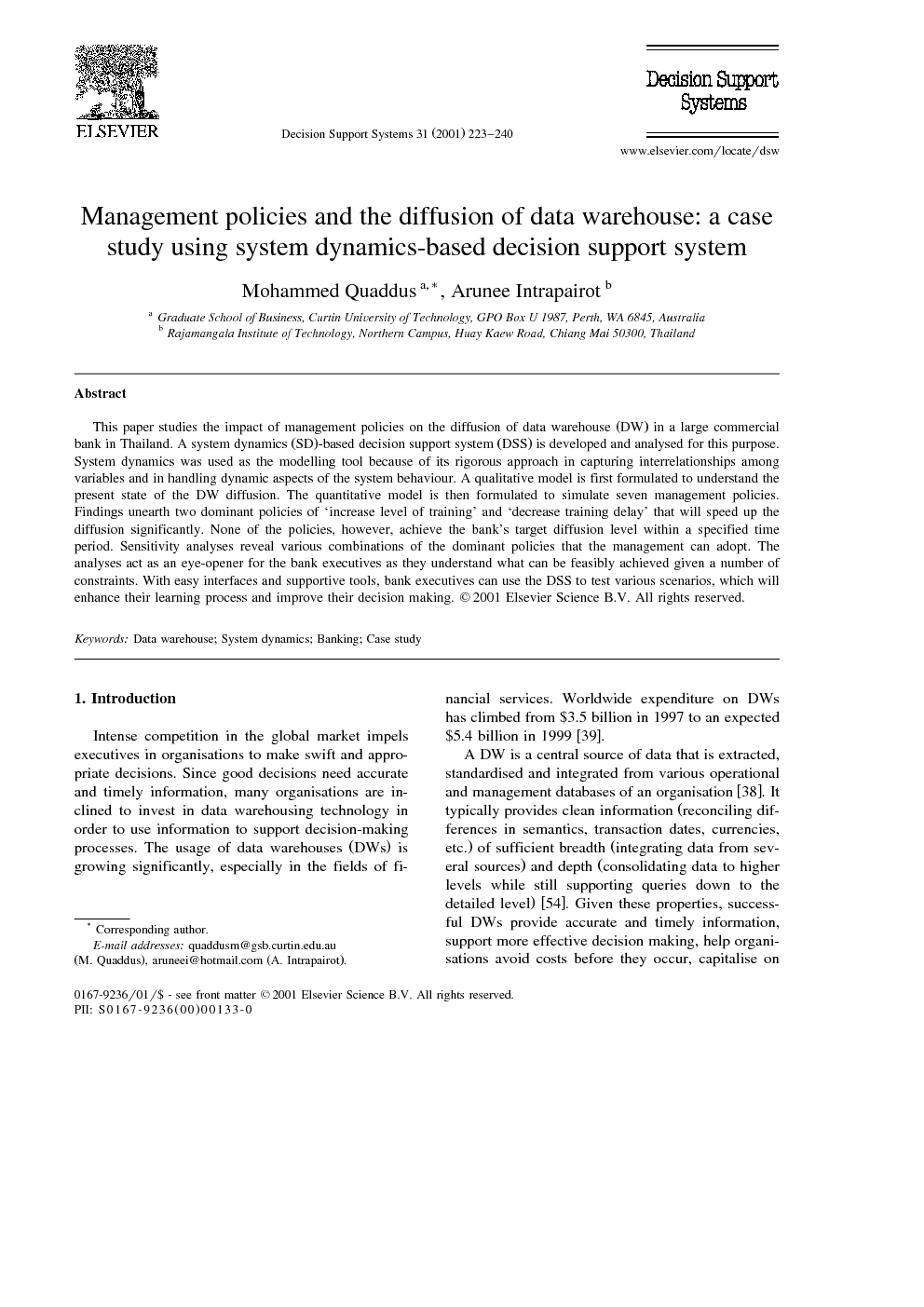 This paper studies the impact of management policies on the diffusion of data warehouse (DW) in a large commercial bank in Thailand. A system dynamics (SD)-based decision support system (DSS) is developed and analysed for this purpose. System dynamics was used as the modelling tool because of its rigorous approach in capturing interrelationships among variables and in handling dynamic aspects of the system behaviour. A qualitative model is first formulated to understand the present state of the DW diffusion. The quantitative model is then formulated to simulate seven management policies. Findings unearth two dominant policies of ‘increase level of training’ and ‘decrease training delay’ that will speed up the diffusion significantly. None of the policies, however, achieve the bank's target diffusion level within a specified time period. Sensitivity analyses reveal various combinations of the dominant policies that the management can adopt. The analyses act as an eye-opener for the bank executives as they understand what can be feasibly achieved given a number of constraints. With easy interfaces and supportive tools, bank executives can use the DSS to test various scenarios, which will enhance their learning process and improve their decision making.

Intense competition in the global market impels executives in organisations to make swift and appropriate decisions. Since good decisions need accurate and timely information, many organisations are inclined to invest in data warehousing technology in order to use information to support decision-making processes. The usage of data warehouses (DWs) is growing significantly, especially in the fields of financial services. Worldwide expenditure on DWs has climbed from $3.5 billion in 1997 to an expected $5.4 billion in 1999 [39]. A DW is a central source of data that is extracted, standardised and integrated from various operational and management databases of an organisation [38]. It typically provides clean information (reconciling differences in semantics, transaction dates, currencies, etc.) of sufficient breadth (integrating data from several sources) and depth (consolidating data to higher levels while still supporting queries down to the detailed level) [54]. Given these properties, successful DWs provide accurate and timely information, support more effective decision making, help organisations avoid costs before they occur, capitalise on previously unrecognised business opportunities, and provide mass customisation of products and services to fit customers' requirements [7], [8], [25] and [28]. Despite the above, the current potential benefits from DWs are still considered low, intangible and inconclusive, and projects take longer than expected. Consultants and vendors estimate optimistically that a DW can furnish the investment within 6 months to 3 years, with paybacks ranging from 100% to 700%. However, actual investors, particularly banks, rarely confirm benefits from investment [40]. Furthermore, quite a few DW projects end in failure even before full implementation owing to lack of immediate substantial economic returns on massive investment [24], [25] and [67]. A careful analysis of the above problems reveals that a DW, like any other technology, requires in-depth planning and ultimately large scale diffusion to all potential users. It must be emphasised that benefits from a DW come, in fact, from the intensity of its usage. That is, the benefits cannot be obtained from the mere provision of the actual physical technology. Therefore, once a DW is adopted, enterprise-wide diffusion is a must. Appropriate policies are therefore needed to achieve sustained enterprise-wide diffusion of a DW.

This paper presents a model of technology diffusion of DW using the SD-based DSS approach. The model demonstrates the ways to develop a requisite model of diffusion of DW using the SD approach incorporating user-friendly tools. Therefore, decision makers are able to test their decisions using their own insights. A qualitative SD approach was initially employed to identify the present state of this technology. The qualitative model provides holistic perspectives, but it is not capable of investigating the impacts of interaction among the feedback loops. A quantitative SD approach was therefore taken. The quantitative model was simulated which provided insights on how to diffuse the DW to the bank staff via training and other policies. The dominant policies for successful diffusion were: increasing the levels of training, and decreasing training delays. Other policies had moderate impact on the diffusion. Sensitivity analyses of the two dominant policies showed various combinations, which could be adopted by the bank executives. If the bank implements all policies effectively, it may dramatically decrease the time for technology diffusion and substantially increase the level of DW diffusion. However, such an undertaking is probably not feasible in reality. The bank should therefore concentrate on the dominant policies and then gradually move into other policies, which are politically, socially and technically feasible to achieve.