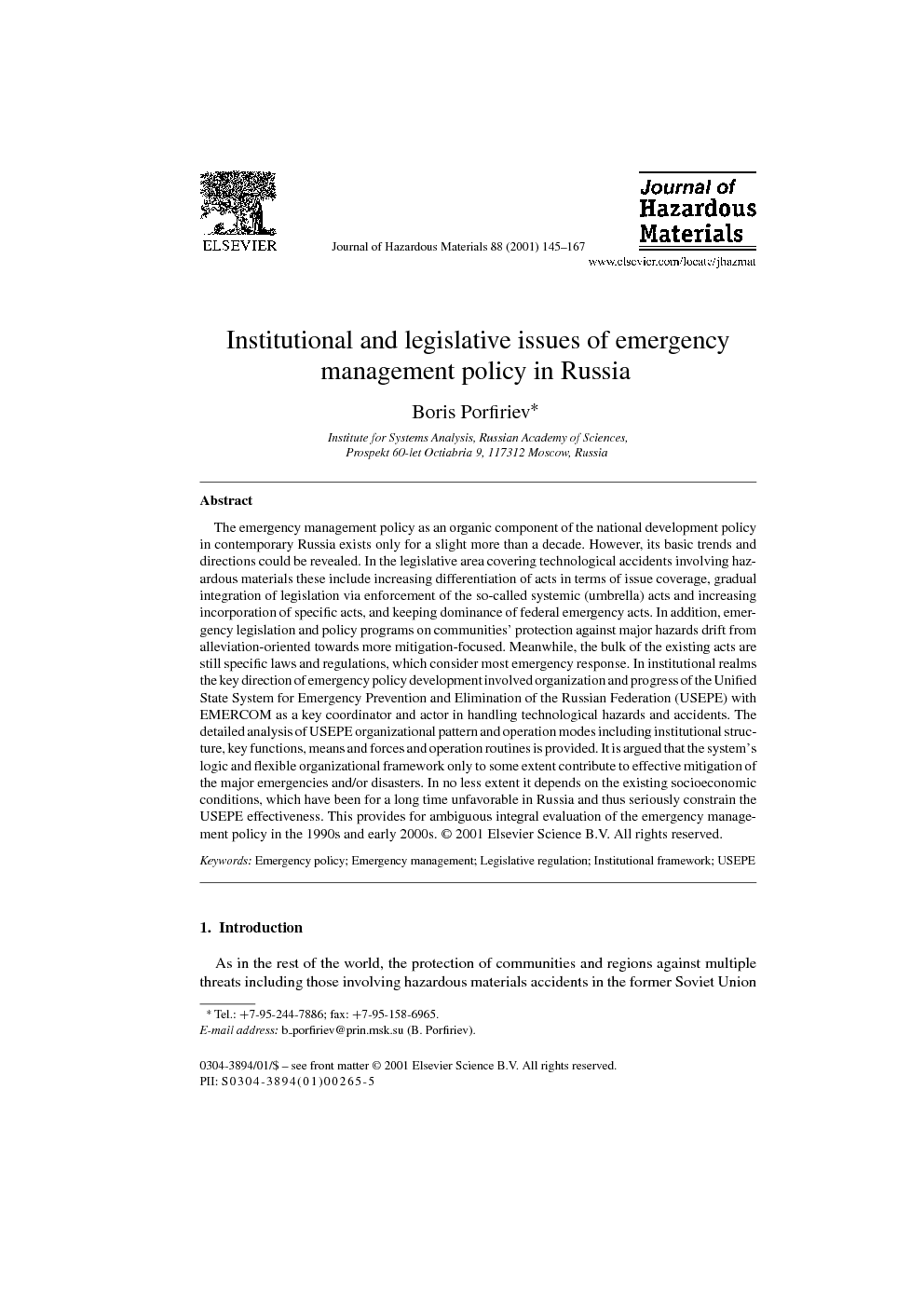 The emergency management policy as an organic component of the national development policy in contemporary Russia exists only for a slight more than a decade. However, its basic trends and directions could be revealed. In the legislative area covering technological accidents involving hazardous materials these include increasing differentiation of acts in terms of issue coverage, gradual integration of legislation via enforcement of the so-called systemic (umbrella) acts and increasing incorporation of specific acts, and keeping dominance of federal emergency acts. In addition, emergency legislation and policy programs on communities’ protection against major hazards drift from alleviation-oriented towards more mitigation-focused. Meanwhile, the bulk of the existing acts are still specific laws and regulations, which consider most emergency response. In institutional realms the key direction of emergency policy development involved organization and progress of the Unified State System for Emergency Prevention and Elimination of the Russian Federation (USEPE) with EMERCOM as a key coordinator and actor in handling technological hazards and accidents. The detailed analysis of USEPE organizational pattern and operation modes including institutional structure, key functions, means and forces and operation routines is provided. It is argued that the system’s logic and flexible organizational framework only to some extent contribute to effective mitigation of the major emergencies and/or disasters. In no less extent it depends on the existing socioeconomic conditions, which have been for a long time unfavorable in Russia and thus seriously constrain the USEPE effectiveness. This provides for ambiguous integral evaluation of the emergency management policy in the 1990s and early 2000s.

As in the rest of the world, the protection of communities and regions against multiple threats including those involving hazardous materials accidents in the former Soviet Union for decades was prerogative of the national civil defense. Also like other countries, emergency management policy evolved from this civil defense context to address the broader spectrum of natural and technological hazards, hazardous materials threats, and ultimately the danger of terrorism. This was an organic component of the national defense system and was responsible for protection of people against military threat, primarily hostile nuclear attack. In the tense years of Cold War in the 1950s and 1960s, such an approach had its obvious political grounds. However, even those should have been considered more comprehensively and embedded in broader connotation of national security. As early as in 1956, the Report of the Committee of Three on Non-Military Cooperation in NATO put it: Security is today far more than a military matter. The strengthening of political consultations and economic cooperation, the development of resources, progress in education and public understanding all can be important for the protection of the security of a nation or an alliance as the building of a battleship or the equipping of an army [1]. Despite this progressive understanding of both national and international security, this failed to be implemented in practical state policies of all nations including the former Soviet Union for many years. In the 1970s and 1980s the peacetime threats including social conflicts, terrorist attacks, natural and technological disasters increasingly turned into the key problems of national security and public safety that required respective change in policy priorities. Meanwhile, again for almost two decades this change did not happen thus increasing the risk of communities being adversely affected by emergencies and disasters’ impact. In addition to this, the former Soviet government officials kept to the existed cover up policy, in particular to natural and technological disasters with ‘no victims, no damage’ being stereotypic public comment coined each time the information about a major crisis occurrence leaked into media and became known to the public. At the same time, the scale and severity of such crises were increasing with the pace of accelerating but poorly managed industrialization and urbanization resulted from one-sided economic policy. The most significant was the human and environmental health impact produced, on the one hand, by hazardous industries because of the poor technological and safety management policies. On the other hand, this followed from technological accidents and disasters, especially those involving hazardous substances and with serious environmental implications, which accounted for the bulk of the total number of casualties and economic damage incurred by all kinds of crises in the former Soviet Union in those two decades. In the 1980s alone, this impact affected several million people with more than 150,000 of those injured or killed annually. This number includes more than 65,000 immediately killed because of the industrial accidents and those died prematurely. Economic damage was no less considerable with our assessments showing the total direct and indirect economic losses incurred by the aforementioned combined impact with that of natural disasters inclusive soaring to 12–15% GDP [2]. It was only the great political and economic changes in the former Soviet Union known as perestroika and the world worst radiation disaster of Chernobyl in the mid 1980s that marked the beginning of real drifting away from the old ‘military’ paradigm of national security policy to a more comprehensive one, which seriously considered a previously flip side of a coin, i.e. peacetime conflict and non-conflict crises. Since those times, these issues became an increasingly organic and important component of the national development and national security policies. This paper contemplates institutional and legislative issues of disaster policy and emergency management in contemporary Russia. Particular emphasis is made on the policy’s handling technological hazards including those involving hazardous materials. The development of an understanding of disaster policy in Russia is important and relevant for several reasons. First, because the context of emergency management is civil defense in many countries, the policy challenges confronted in Russia must also be met elsewhere. Second, hazardous materials management is a special case of public policy and one must understand the governmental and policy processes to assess the effectiveness of different approaches to this threat. Finally, emergency managers across many nations — particularly in the West — have expressed frustration that government legislation sometimes makes hazardous materials threats more acute instead of less dangerous. The case history of the Russian experience can inform those in other countries of the issues and the connections between legislation and achieving effective hazardous materials preparedness in local communities.

The 10-year experience of the Russian emergency management policy reveals ambiguity of its development trends. In legislative area, worth positive stressing is the increasing number of all-level authorities’ acts, which now cover a wide range of critical issues of emergency policy and juridical relationships between respective management actors. However, the scope and quality of the existing legislation are still far from meeting all basic needs of civil emergency management in Russia. This calls for a more thorough and critical analysis of the past efforts made on a national level in this area. In addition, worth more intensive and comprehensive study, is the international legislative experience of coping with major emergencies and disasters, particularly the accidents involving hazardous materials. As the historic example of Seveso I Directive followed then by Seveso II Directive shows, efficient legislation development and enforcement efforts can reduce the risk of such accidents by 7–10 times within less than a decade. In a broader perspective of legislative and institutional realms of emergency management policy and, more generic, the national security system, this implies a future development strategy qualitatively new for Russia. Whatever its label with that of internationally accepted ‘sustainable development’ applicable but at no end the unique one, this new strategy implies all-risk management at the core. It should provide for actual and perceived hazards’ loss and damage reduction presuming that the best available and efficient measures would mitigate these but would never bring risk down to zero. In addition, such policy measures should be oriented on achievable and socially acceptable value of risk, which vary within the vast territory of the Russian Federation. From its 89 entities 27 or 30.3% of their total number include the areas stuffed with chemical, radiation and other high-risk facilities. Within each of these areas more than 700,000 people or 0.5% of the total population of Russia live. EMERCOM considers these as Class I or the most hazardous regions. Respectively, 33 entities of the Russian Federation or 37.1% are Class II or hazardous regions with respective areas accommodating from 300,000 to 700,000 people or from 0.2 to 0.5% of the total country’s population each. In addition, 29 regions or 32.6% of the entities of the Russian Federation are Class III or less hazardous regions [15]. This means that more than half of the national population who live in two thirds of the Russian regions stay in extremely hazardous or hazardous conditions, which threaten to human health. In addition to unfavorable natural and social environment such conditions involve almost 45,000 hazardous facilities where most of these people work at or are living close to. Precisely, these regions and communities should be in the focus of the new emergency management policy at the regional level. At the same time, mitigation measures should be developed and implemented at the federal level, too. These should consider the whole Russian population given the average level of individual risk in two orders of magnitude exceeding that existing in the world most industrialized countries. If put into practical terms in the foreseeable future, the new emergency management policy would provide for more comprehensive national security policy of Russia and her sustainable development for a long-term perspective.