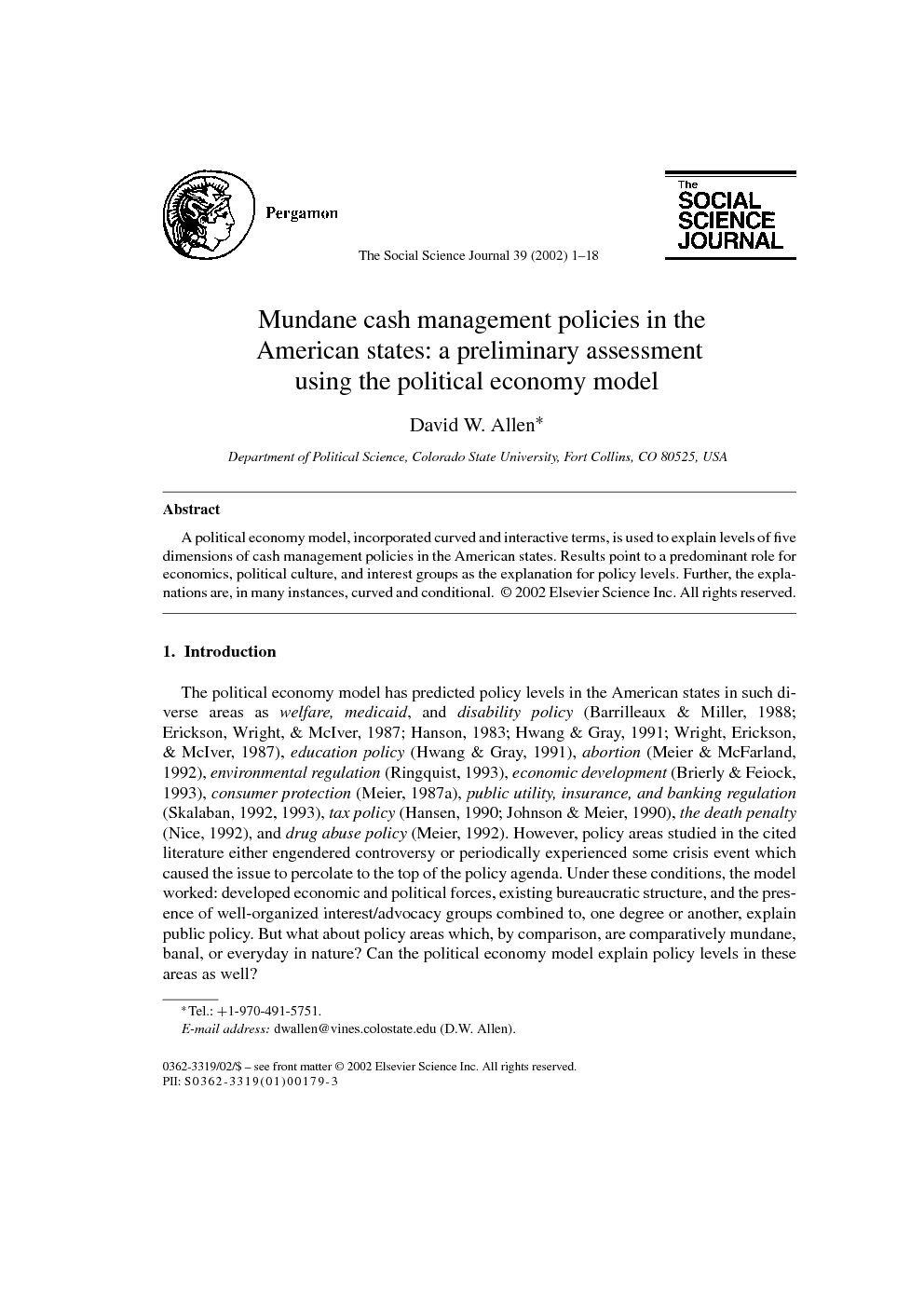 A political economy model, incorporated curved and interactive terms, is used to explain levels of five dimensions of cash management policies in the American states. Results point to a predominant role for economics, political culture, and interest groups as the explanation for policy levels. Further, the explanations are, in many instances, curved and conditional.

The political economy model has predicted policy levels in the American states in such diverse areas as welfare, medicaid, and disability policy ( Barrilleaux & Miller, 1988; Erickson, Wright, & McIver, 1987; Hanson, 1983; Hwang & Gray, 1991; Wright, Erickson, & McIver, 1987), education policy ( Hwang & Gray, 1991), abortion ( Meier & McFarland, 1992), environmental regulation ( Ringquist, 1993), economic development ( Brierly & Feiock, 1993), consumer protection ( Meier, 1987a), public utility, insurance, and banking regulation ( Skalaban, 1992 and Skalaban, 1993), tax policy ( Hansen, 1990; Johnson & Meier, 1990), the death penalty ( Nice, 1992), and drug abuse policy ( Meier, 1992). However, policy areas studied in the cited literature either engendered controversy or periodically experienced some crisis event which caused the issue to percolate to the top of the policy agenda. Under these conditions, the model worked: developed economic and political forces, existing bureaucratic structure, and the presence of well-organized interest/advocacy groups combined to, one degree or another, explain public policy. But what about policy areas which, by comparison, are comparatively mundane, banal, or everyday in nature? Can the political economy model explain policy levels in these areas as well? Mundane means, for purposes of this research, that the policy domain operates in an environment relatively free from crisis or controversy. A policy area is therefore classified as mundane only by comparison to other policy areas (Allen, 1999). Cash management policies are one such area. State governments have adopted a broad range of policies which govern such items as allowable state investments and banking relations/investment practices—to name but a few. Nestled with these dimensions are a host of individualized policies—such as policies governing investment of U.S. Treasury obligations, competitive bidding practices on deposits and compensatory balances, account reconciliations services and state authority to invest in Eurodollars. These items do not attract high levels of public scrutiny or agenda attention. Nor does it seem plausible to conceptualize the studied domain in terms of crisis events which periodically cause other policy debates to percolate to the top of the policy agenda. For example, a variety of forces periodically push welfare and education policy, environmental regulations, and taxes to the forefront of the American political consciousness (Hansen, 1990; Hwang & Gray, 1991; Lowery, 1987; Ringquist, 1993; Sigelman, Lowery, & Smith, 1983). By comparison, accounting for and processing funds between collection and expenditure appears to slide within the ground clutter of the public’s political radar scope.

Several conclusions derive from the analysis. First, the four component political economy model’s overall utility varied across policy dimensions. The best results were evident for the policy dimensions which subsumed protecting demand deposits and selecting depositories. In these instances 53 and 49% of the variance was explained, respectively. The worst results were evident for adoption rates of policies dealing with allowable state investments, where only 21% of the variance was explained. Between these extremes, the model explained between 37 and 42% of the variance in policies governing complexity of cash management services and banking relations/investment practices, respectively. The range of results for the five policy dimensions indicates that additional research is needed in order to adequately explain cash management policy levels. One possible approach might be to question whether the adoption of “mundane” policies is simply a function of internal state characteristics—as studied here—or whether, as some suggest (Berry & Berry, 1990; Berry, 1994, Hayes, 1996 and Mintrom, 1997; Mintrom and Vergari, 1996 and Mintrom and Vergari, 1998), policies diffuse through states, with more states taking action as they observe the experience of other states. A second major conclusion focuses on the economic component of the model. As anticipated, economic measures played a major role in explaining all five dimensions of cash management policy. This result was anticipated because the policy dimensions deal with cash management and economically complex states with high tax pressure and wealthier, more educated polities were expected to generate large amounts of cash that would require special handling between time of collection and expenditure. However, what was not expected was the complexity of the relationships between economic considerations and policy levels. For example, while the relationship between social class and all policy dimensions does conform to a straightforward linear relationship, the tax pressure measures reflect either curved or conditional relationships and the economic complexity measure combines with various aspects of political culture. These terms were included in ad hoc fashion with post hoc explanations created to explain the relationships. Thus, these economic findings need to be replicated in other policy areas in order to determine whether the results are idiosyncratic only to mundane policies or whether they are applicable to a broad range of policies. A similar statement can be made about the political culture dimension of the model. A moralistic culture directly influenced policies affecting banking/investment practices and protection of demand deposits and moderates the effect of economic considerations on two other policy dimensions: complexity of cash management services; and, methods of selecting depositories. A similar conditional relationship was evident for the individualistic ethos in regards to allowable state investments. Once again, the nexus between economics and culture needs to be replicated for other policy areas in order to determine whether this set of findings is idiosyncratic to the special policies studied herein or whether such relationships are present in other areas, as well. While the overall results indicate that economics and political culture do constitute a consistent—albeit complex—set of explanations for adoption of cash management policies, some aspects of politics are present: partisanship played a role in explaining allowable state investment policies and policies governing protection of demand deposits; and, ideology has a direct and conditional role to play in explaining adoption rates for three policy dimensions: complexity of cash management services, methods of selecting depositories, and protection of demand deposits. The partisanship, ideology, and political culture measures indicate that politics plays a role in explaining the level of mundane policy adoption. However, a separate measure of politics—legislative professionalism—exerted no effect on any of the policy dimensions. Three alternate explanations may be tied to this outcome. First, the “mundaneness” of the policy area may not require a highly technical response on the part of state legislatures—that is, they may simply be responding to bureaucratic recommendations. As such, legislative response to policy needs may be similar regardless of the nature of legislative professionalism. Second, most professionalism measures tend to combine weighted scores for length of tenure, staff size, session length, and the budget process. The current research scores state legislatures as approximating the structure of the U.S. Congress. Thus, the current findings could be attributed to employment of a different measure. However, there is also a third reason for the consistently null finding: quite possibly what is required is a measure of state legislative capacity to process information. A state legislature with a high capacity to process technical information would be better able to profit from the experience of other states. Another interesting null finding centers on the rather poor performance of the Treasurer Office measure. This concept was only useful in the area of allowable state investments—and the construction of the Treasurer Office measure (which focused mainly on this office’s investment control responsibilities) would indicate that this relationship should be anticipated. However, possibly the bureaucracy measure employed in this research needs improvement. For example, an institutionally strong Treasurers Office (as measured here) with a minuscule staff might be incapable of exerting an effect on many of these policy domains—providing a broad field of play for organized interests to restructure policy to meet their own needs; as, indeed, results indicate for the banking interest measure. The banking interest measure played a role with regard to three policy dimensions: banking and investment practices, methods of selecting depositories, and protection of demand deposits. All three dimensions are intimately related to how banking interest carry out daily tasks. The banking interest relationships might indicate that these organized interests pick and choose among various policy dimensions—concentrating only on dimensions which impact their day-to-day internal operations. This point is deserving of closer scrutiny because it leads to the conclusion—insofar as mundane policies are concerned—that interest groups pay attention to policies that affect their day-to-day operations because that is where increased costs of operation may become most prevalent.