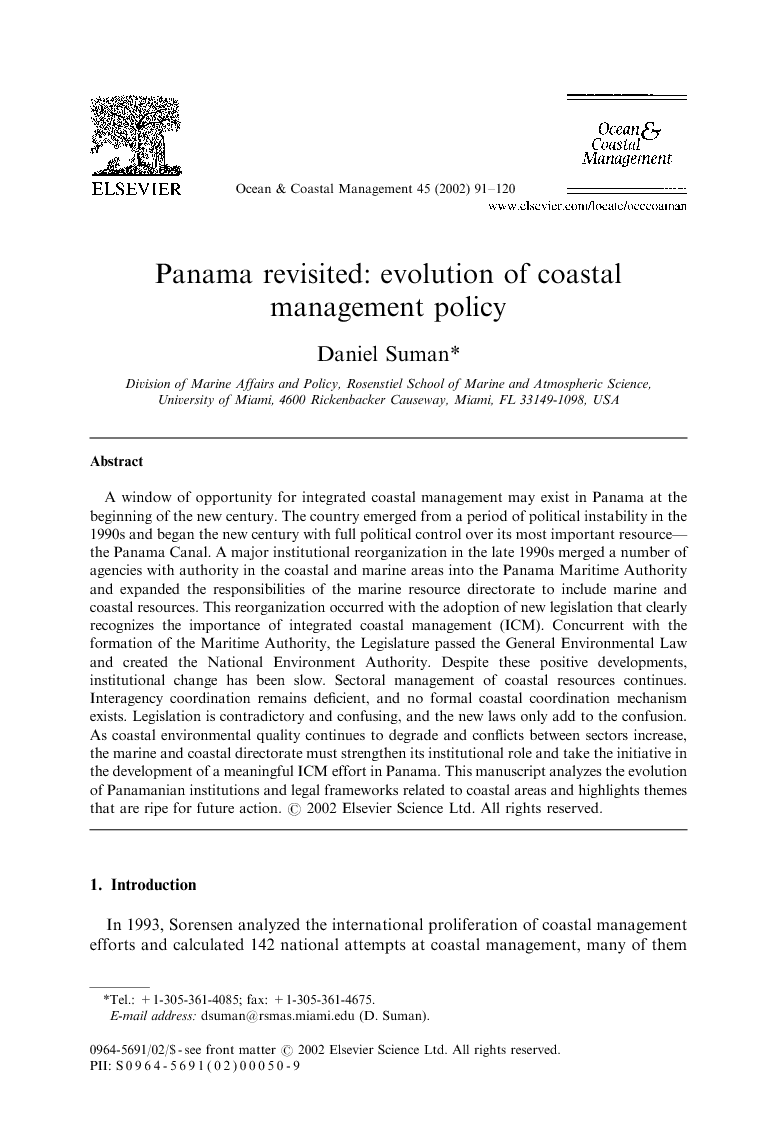 A window of opportunity for integrated coastal management may exist in Panama at the beginning of the new century. The country emerged from a period of political instability in the 1990s and began the new century with full political control over its most important resource—the Panama Canal. A major institutional reorganization in the late 1990s merged a number of agencies with authority in the coastal and marine areas into the Panama Maritime Authority and expanded the responsibilities of the marine resource directorate to include marine and coastal resources. This reorganization occurred with the adoption of new legislation that clearly recognizes the importance of integrated coastal management (ICM). Concurrent with the formation of the Maritime Authority, the Legislature passed the General Environmental Law and created the National Environment Authority. Despite these positive developments, institutional change has been slow. Sectoral management of coastal resources continues. Interagency coordination remains deficient, and no formal coastal coordination mechanism exists. Legislation is contradictory and confusing, and the new laws only add to the confusion. As coastal environmental quality continues to degrade and conflicts between sectors increase, the marine and coastal directorate must strengthen its institutional role and take the initiative in the development of a meaningful ICM effort in Panama. This manuscript analyzes the evolution of Panamanian institutions and legal frameworks related to coastal areas and highlights themes that are ripe for future action.

Given the long history of sectoral management in coastal areas in Panama and the entrenched economic and national priority interests (Panama Canal) of some sectors, plus the political instability and rapid institutional development (especially in the environmental arena), the lack of an ICM program is not surprising. Progress has occurred in the past decade, however. Inventories of marine and coastal resources and uses have begun [5]. Conflicts over use of coastal space have increased in the past decade (sand mining vs. tourism; urban sewage vs. fisheries and marine recreation; port development vs. mangrove conservation; tourist development vs. conservation of marine national parks), increasing the awareness of the need to adopt new coastal management strategies. A strong new environmental agency has come into existence and is consolidating the role of the EIA. Partial unification of maritime agencies with expansion of the role of the fisheries directorate to include marine and coastal resources has created a new space for ICM. Many pieces in the ICM foundation exist at the present time. Nevertheless, great efforts still are necessary to create an effective institutional arrangement for ICM in Panama at the highest levels of government and begin to develop an ICM program. AMP needs to conduct a legal analysis of Panamanian laws and regulations concerning coastal areas and recommend revisions that will eliminate the confusion and contradiction that currently exist. AMP's Directorate of Marine and Coastal Resources must exert its influence and authority and elevate ICM in importance within the AMP that is currently dominated by the economically important merchant marine and port interests. An appropriate and important avenue for the General Directorate of Marine and Coastal Resources will be to carefully conduct a pilot ICM program in a zone with critical habitats, but absence of important vested economic investments. The results and experience of such a program could indicate the positive benefits of ICM, stimulate institutional coordination, and generate further interest in application of ICM to other areas. In early 2002, such an ICM pilot project was about to begin in Darién Province adjacent to the Panama–Colombia border. The General Directorate of Marine and Coastal Resources will oversee this project which is part of a larger package of projects under the Program for the Sustainable Development of the Darién. Through Decree Law No. 7, AMP has established the general goals for its coastal authority. However, the agency has yet to establish priorities and most importantly, lacks the means to reach these goals. AMP needs to effectively coordinate with the many other agencies that have some responsibility over coastal activities. The key link lies with AMP and ANAM. These two authorities urgently need to reach an agreement on coordination of coastal zone activities.