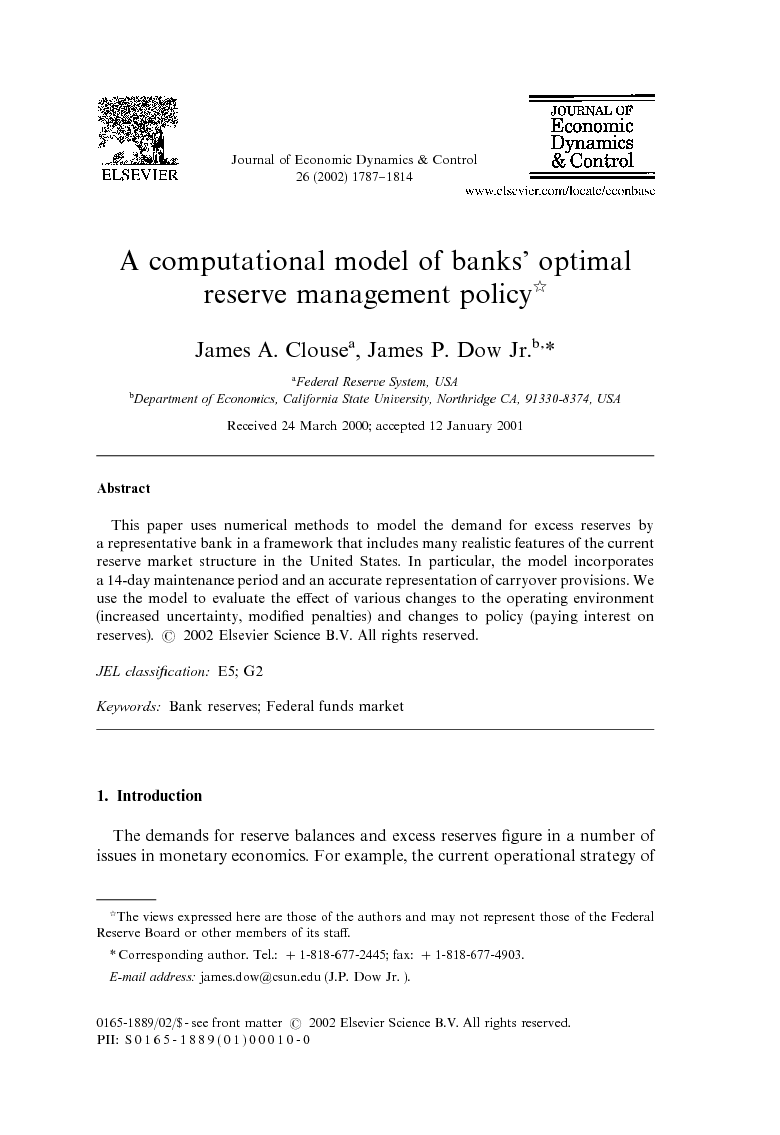 This paper uses numerical methods to model the demand for excess reserves by a representative bank in a framework that includes many realistic features of the current reserve market structure in the United States. In particular, the model incorporates a 14-day maintenance period and an accurate representation of carryover provisions. We use the model to evaluate the effect of various changes to the operating environment (increased uncertainty, modified penalties) and changes to policy (paying interest on reserves).

This paper has examined the daily demand for reserves in an optimizing model of bank reserve management that takes into account the full 14-day character of maintenance periods, weekend effects, and carryover provisions. The previous literature has developed a model of the precautionary demand for reserves that has emphasized the tradeoff between the risk of overdrafts and reserve deficiencies and the opportunity cost of holding reserves. But in order to solve for the predictions of the model, the literature has been forced to abandon much of the institutional detail of reserve requirements; or alternatively, abandon the assumption of optimization or the incorporation of future costs into that decision. Our use of numerical methods to solve the optimization problem and to simulate the dynamic demand for reserves allows us to address a wide variety of issues. We have shown the effect of uncertainty, the level of reserve requirements, and overdraft penalties on the pattern of reserve holding over the maintenance period. We have extended the analysis of carryover behavior by taking into account the effect of uncertainty on targeted carry-out, and by showing how reserves carried into the maintenance period affect reserve demand. We have also used our model to examine the effect of proposed institutional changes to reserve requirements, such as paying interest on excess reserves. We are optimistic that this model can be used to address other issues of interest in the operation of monetary policy. A practical concern for the open market desk are ‘work-off rates’: how fast banks will reduce their reserve holdings in response to an unexpected increase in reserves. More generally, we want to know how an unexpected change in a bank's reserve position on one day will affect its demand for reserves on subsequent days. Several papers have provided approximate answers: Spindt and Hoffmeister (1988) assume that banks will work off the entire amount of extra reserves evenly over the maintenance period, while Longworth (1989) argues that a bank will generally want to offset some, but not all, of the effect of the shock because of the increased risk of overdrafts on subsequent days of the maintenance period. Our model is able to provide a detailed analysis of the optimal response, including showing how it will depend on the day of the maintenance period and the amount of carry-in. Further topics of research may include studying the shape of the demand schedule, particularly its responsiveness to change in interest rates, and the effect of interest rate uncertainty on bank demand. This would require including a stochastic interest rate variable in the model, which would add an additional level of computational complexity, but no change in the method of analysis. Perhaps most importantly, our model is quite flexible in addressing the effect of potential changes in reserve policy. What form these policy initiatives will take remains to be seen; they will depend on future innovations in bank reserve management (such as sweep programs) and the response by the Federal Reserve.