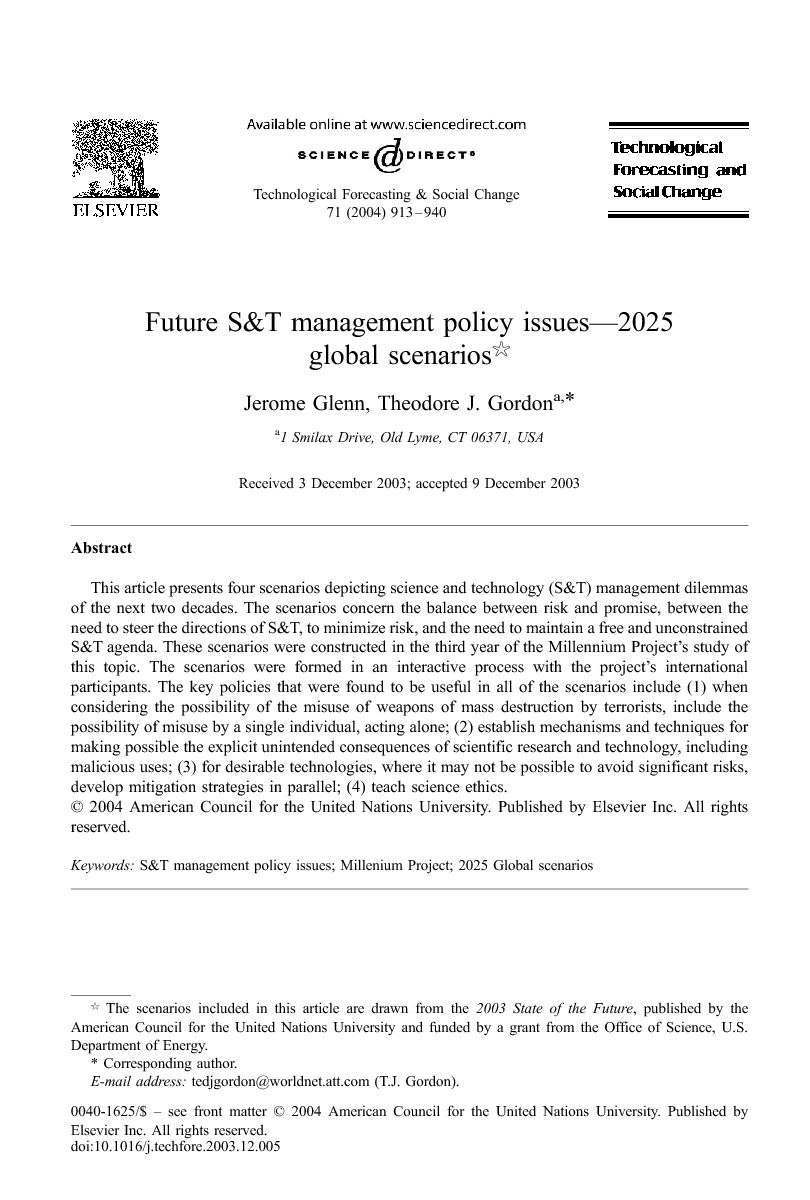 This article presents four scenarios depicting science and technology (S&T) management dilemmas of the next two decades. The scenarios concern the balance between risk and promise, between the need to steer the directions of S&T, to minimize risk, and the need to maintain a free and unconstrained S&T agenda. These scenarios were constructed in the third year of the Millennium Project's study of this topic. The scenarios were formed in an interactive process with the project's international participants. The key policies that were found to be useful in all of the scenarios include (1) when considering the possibility of the misuse of weapons of mass destruction by terrorists, include the possibility of misuse by a single individual, acting alone; (2) establish mechanisms and techniques for making possible the explicit unintended consequences of scientific research and technology, including malicious uses; (3) for desirable technologies, where it may not be possible to avoid significant risks, develop mitigation strategies in parallel; (4) teach science ethics

Over the past three years, the Millennium Project has conducted a study of future issues in science and technology (S&T) management, involving a well-informed and internationally diverse panel of futurists, scientists, and policy advisors. The first year's work explored key questions about the future of S&T and sought initial answers or actions for each issue. This was accomplished through a two-round questionnaire and a series of workshops with Science Attachés in Washington, DC1 The second year's work collected a range of judgments about managing S&T risks, improving relationships between S&T and policymaking, fostering interdisciplinary S&T, and dealing with the implications of globalization for S&T management. With that background in hand, the third year's research reported in this article was designed to create a set of alternative scenarios that made S&T management policy issues explicit against a variety of plausible backdrops. A two-round questionnaire (to which 122 participants responded) was used to collect judgments about the content of the scenarios.2 The results were used to write the four scenarios included here. Some conclusions about the needed and effective S&T policy were drawn from these scenarios, and the conclusions are presented in this paper after the scenarios.