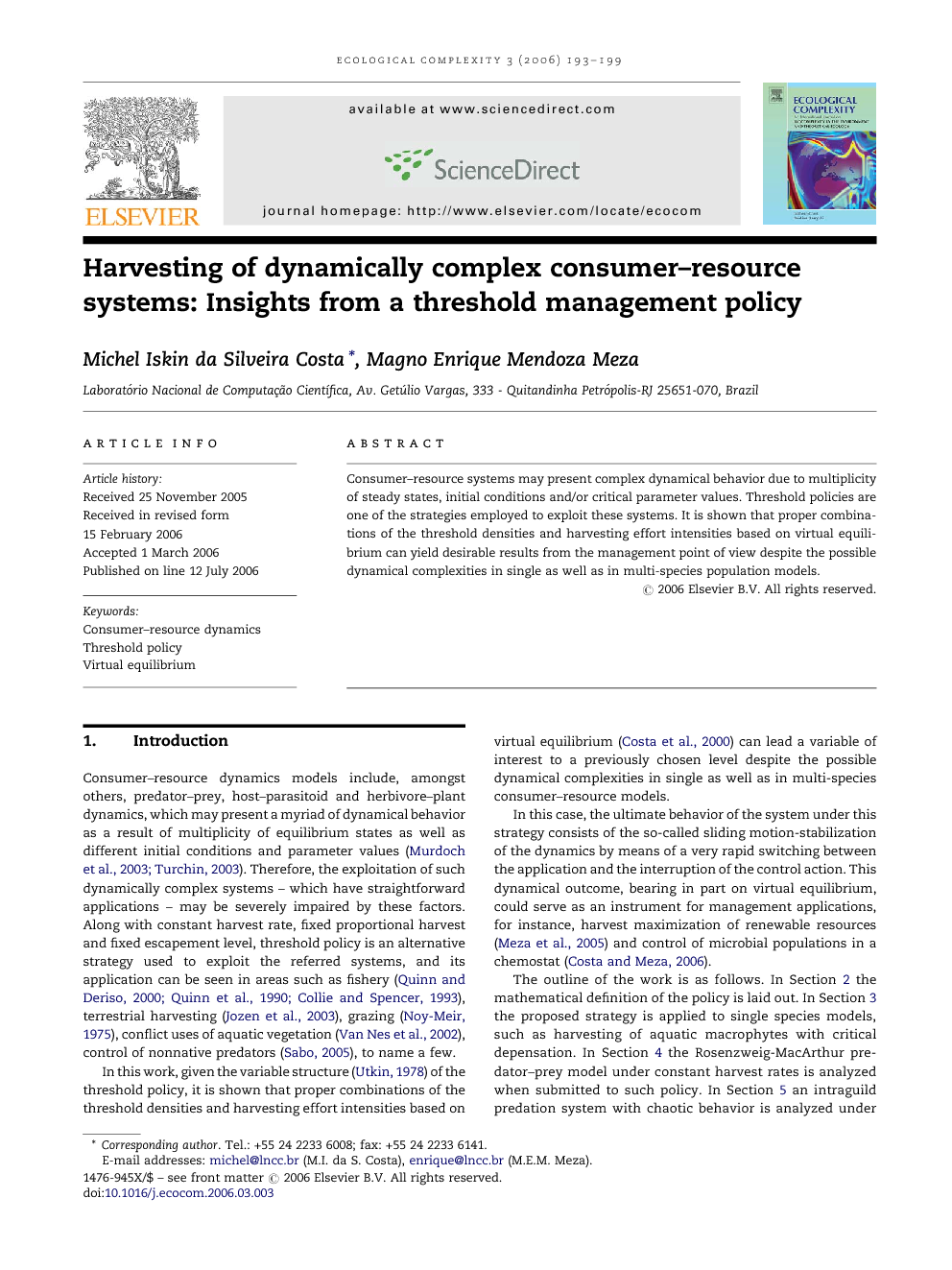 Consumer–resource systems may present complex dynamical behavior due to multiplicity of steady states, initial conditions and/or critical parameter values. Threshold policies are one of the strategies employed to exploit these systems. It is shown that proper combinations of the threshold densities and harvesting effort intensities based on virtual equilibrium can yield desirable results from the management point of view despite the possible dynamical complexities in single as well as in multi-species population models.

Consumer–resource dynamics models include, amongst others, predator–prey, host–parasitoid and herbivore–plant dynamics, which may present a myriad of dynamical behavior as a result of multiplicity of equilibrium states as well as different initial conditions and parameter values (Murdoch et al., 2003 and Turchin, 2003). Therefore, the exploitation of such dynamically complex systems – which have straightforward applications – may be severely impaired by these factors. Along with constant harvest rate, fixed proportional harvest and fixed escapement level, threshold policy is an alternative strategy used to exploit the referred systems, and its application can be seen in areas such as fishery (Quinn and Deriso, 2000, Quinn et al., 1990 and Collie and Spencer, 1993), terrestrial harvesting (Jozen et al., 2003), grazing (Noy-Meir, 1975), conflict uses of aquatic vegetation (Van Nes et al., 2002), control of nonnative predators (Sabo, 2005), to name a few. In this work, given the variable structure (Utkin, 1978) of the threshold policy, it is shown that proper combinations of the threshold densities and harvesting effort intensities based on virtual equilibrium (Costa et al., 2000) can lead a variable of interest to a previously chosen level despite the possible dynamical complexities in single as well as in multi-species consumer–resource models. In this case, the ultimate behavior of the system under this strategy consists of the so-called sliding motion-stabilization of the dynamics by means of a very rapid switching between the application and the interruption of the control action. This dynamical outcome, bearing in part on virtual equilibrium, could serve as an instrument for management applications, for instance, harvest maximization of renewable resources (Meza et al., 2005) and control of microbial populations in a chemostat (Costa and Meza, 2006). The outline of the work is as follows. In Section 2 the mathematical definition of the policy is laid out. In Section 3 the proposed strategy is applied to single species models, such as harvesting of aquatic macrophytes with critical depensation. In Section 4 the Rosenzweig-MacArthur predator–prey model under constant harvest rates is analyzed when submitted to such policy. In Section 5 an intraguild predation system with chaotic behavior is analyzed under the proposed TP. Finally, a discussion of the results is presented.