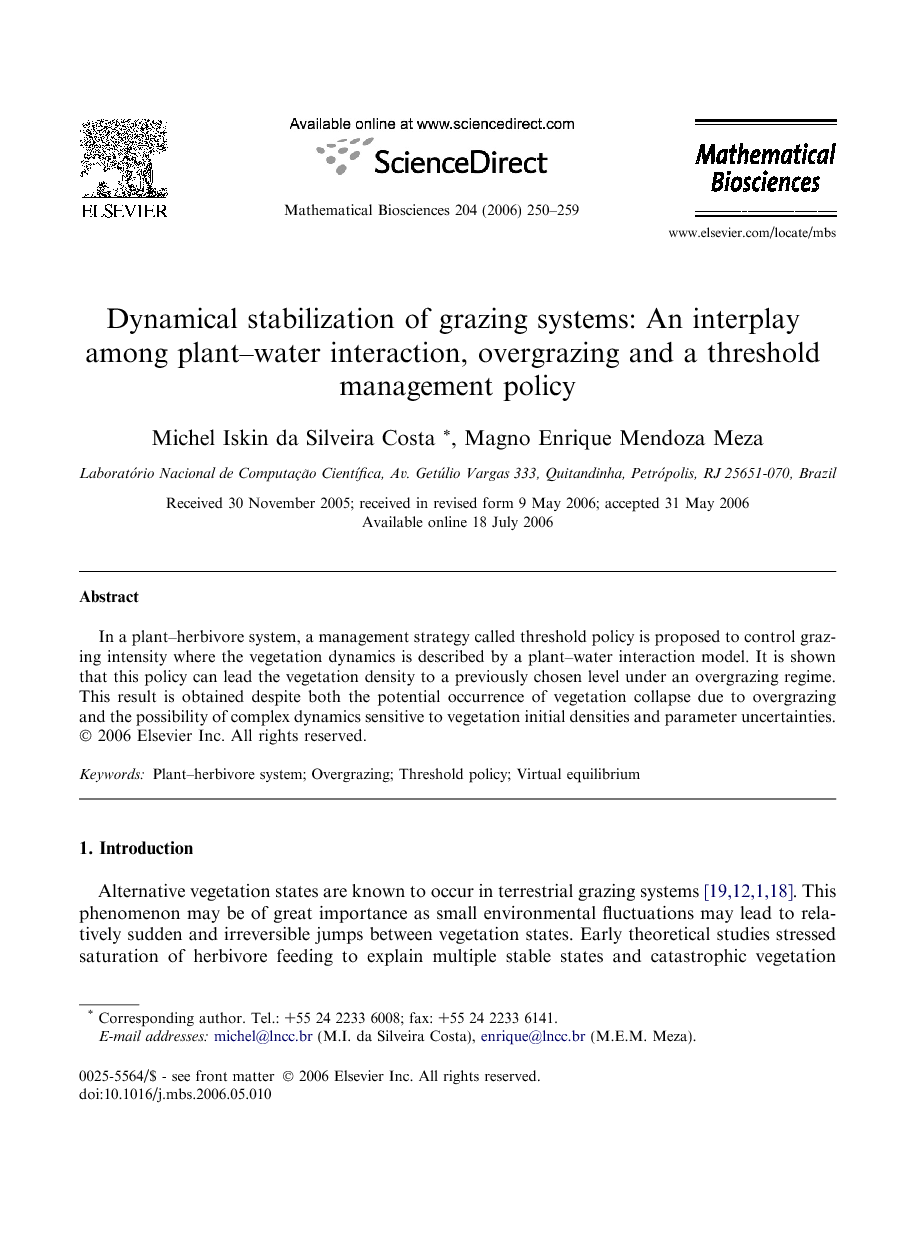 In a plant–herbivore system, a management strategy called threshold policy is proposed to control grazing intensity where the vegetation dynamics is described by a plant–water interaction model. It is shown that this policy can lead the vegetation density to a previously chosen level under an overgrazing regime. This result is obtained despite both the potential occurrence of vegetation collapse due to overgrazing and the possibility of complex dynamics sensitive to vegetation initial densities and parameter uncertainties

Alternative vegetation states are known to occur in terrestrial grazing systems [19], [12], [1] and [18]. This phenomenon may be of great importance as small environmental fluctuations may lead to relatively sudden and irreversible jumps between vegetation states. Early theoretical studies stressed saturation of herbivore feeding to explain multiple stable states and catastrophic vegetation behavior. Recent studies, however, relate vegetation collapses in these systems to plant–nutrient and plant–water interactions. Models of water–plant and nutrient–plant interaction may display a multiplicity of equilibrium states under herbivore grazing, enabling collapses or catastrophic shifts between vegetation levels. These changes may prove difficult to be reversed under external actions, impairing the efficiency of management strategies in plant–herbivore systems. Along with constant harvest rate, fixed proportional harvest and fixed escapement level, threshold policy is an alternative strategy used to exploit consumer–resource systems, and its application can be seen in areas such as fishery [10], [11] and [2], terrestrial harvesting [6], conflict uses of aquatic vegetation [20], control of non-native predators [14], to name a few. In grazing systems, this strategy corresponds to a stock removal policy whenever the vegetation density reaches a specified minimum grazing [9, p. 470]. In the context of renewable resource management, a threshold policy can be defined in broad terms as follows: control (grazing, harvesting, etc.) is suppressed when species abundance is below a previously chosen threshold density; above the threshold, control is applied. In this work, resorting to the variable structure [16] of the threshold policy, it is shown that proper combinations of the vegetation threshold densities and grazing effort intensities based in part on virtual equilibrium [3] can lead the plant state to a previously chosen level despite the possible dynamical complexities of a specific terrestrial grazing model. In this case, the ultimate behavior of the system under this strategy consists of the so called sliding motion – stabilization of the dynamics by means of a very rapid switching between the application and the interruption of the control action. This dynamical outcome could serve as an instrument for management applications, for instance, control of microbial populations in a chemostat [4] and harvest maximization of renewable resources [8]. The outline of the work is as follows. In Section 2, the mathematical structure of the policy is laid out. In Section 3, the dynamical water–plant model proposed in Rietkerk et al. [13] is introduced. In Section 4, the referred model under the proposed threshold policy is presented together with its dynamical results. Then, it is shown that this strategy can stabilize grazing models in the vicinity of a previously chosen vegetation level by means of the creation of virtual equilibrium points. This controlled dynamical behavior can be generated despite both the potential occurrence of vegetation collapse due to overgrazing and the possibility of complex dynamics sensitive to plant initial densities and parameter uncertainties.