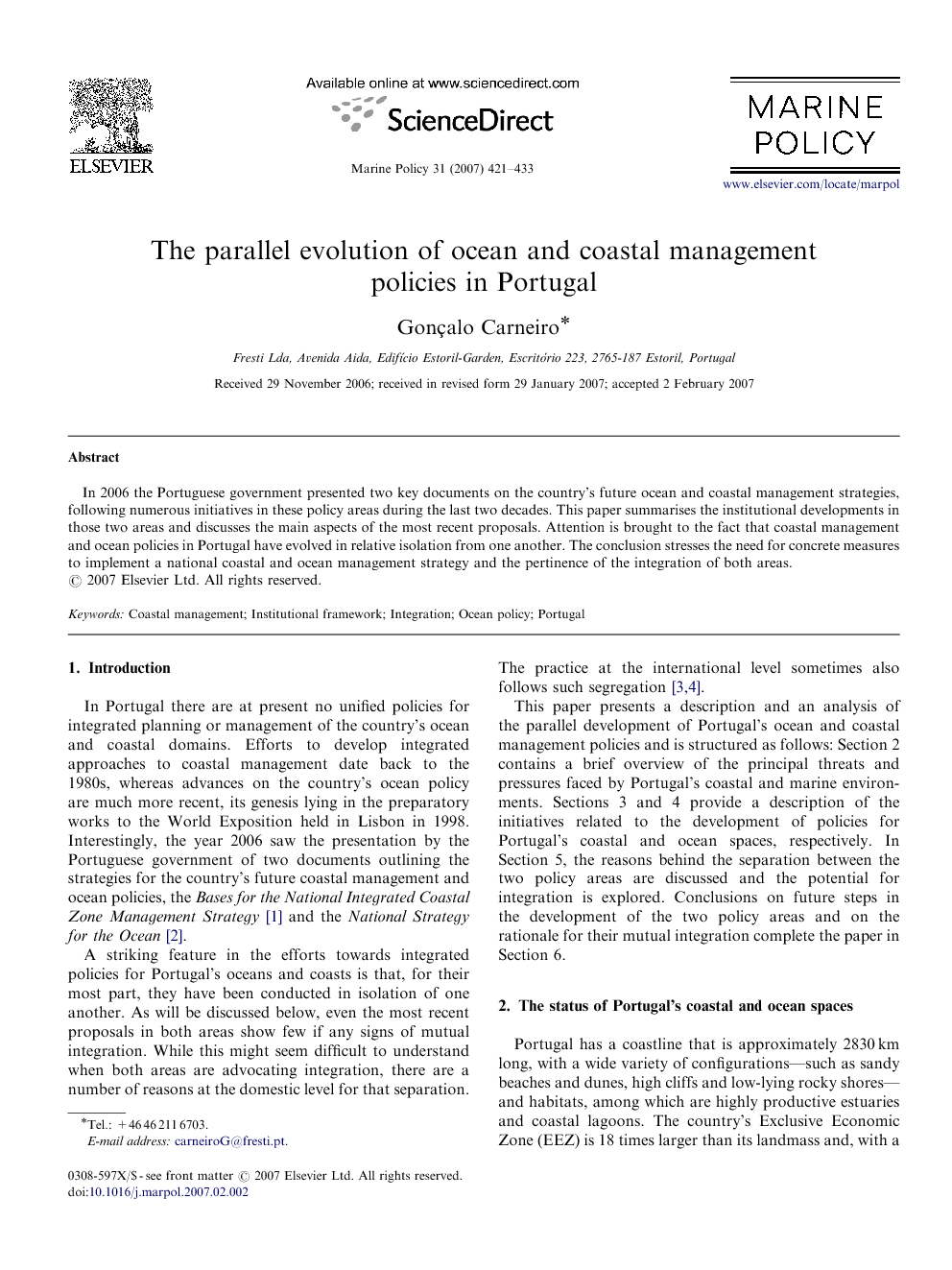 In 2006 the Portuguese government presented two key documents on the country's future ocean and coastal management strategies, following numerous initiatives in these policy areas during the last two decades. This paper summarises the institutional developments in those two areas and discusses the main aspects of the most recent proposals. Attention is brought to the fact that coastal management and ocean policies in Portugal have evolved in relative isolation from one another. The conclusion stresses the need for concrete measures to implement a national coastal and ocean management strategy and the pertinence of the integration of both areas.

In Portugal there are at present no unified policies for integrated planning or management of the country's ocean and coastal domains. Efforts to develop integrated approaches to coastal management date back to the 1980s, whereas advances on the country's ocean policy are much more recent, its genesis lying in the preparatory works to the World Exposition held in Lisbon in 1998. Interestingly, the year 2006 saw the presentation by the Portuguese government of two documents outlining the strategies for the country's future coastal management and ocean policies, the Bases for the National Integrated Coastal Zone Management Strategy [1] and the National Strategy for the Ocean [2]. A striking feature in the efforts towards integrated policies for Portugal's oceans and coasts is that, for their most part, they have been conducted in isolation of one another. As will be discussed below, even the most recent proposals in both areas show few if any signs of mutual integration. While this might seem difficult to understand when both areas are advocating integration, there are a number of reasons at the domestic level for that separation. The practice at the international level sometimes also follows such segregation [3] and [4]. This paper presents a description and an analysis of the parallel development of Portugal's ocean and coastal management policies and is structured as follows: Section 2 contains a brief overview of the principal threats and pressures faced by Portugal's coastal and marine environments. 3 and 4 provide a description of the initiatives related to the development of policies for Portugal's coastal and ocean spaces, respectively. In Section 5, the reasons behind the separation between the two policy areas are discussed and the potential for integration is explored. Conclusions on future steps in the development of the two policy areas and on the rationale for their mutual integration complete the paper in Section 6.

In the last two decades, Portugal has been witness to a succession of programmes, plans and policy proposals related to the planning and management of its coastal zone and, since the late 1990s, its ocean spaces. Regrettably, despite the good intentions and the commitment of many professionals in those two areas, the majority of those initiatives were undermined by the lack of continuing political support. All too often, the enthusiastic launch of a new programme was followed by limited implementation of its measures and ultimately by disappearance into oblivion. Such seesaw-like evolution has had two very deleterious consequences. First, the absence of a coherent, consistent and predictable line of policy and investment in coastal and ocean matters has left a number of policy sectors lingering and, for the good and for the bad, subject to voluntarism or simply abandonment. Examples include the lack of satisfactory shipping and port policies; an unclear regime for coastal planning, which, coupled with varying enforcement capabilities, still allows dubious occupations of coastal areas; or in relation to the serious issue of coastal erosion, the absence of a regime that commits all relevant actors to a common line of action. The second consequence is the disappointment, and even mistrust, felt by many in relation to any new initiative put forward by the government. On the one hand, there is a tiredness of proposals containing a wealth of principles and intentions that do not translate into executable measures. On the other, there is frustration for the lack of effective implementation of many of the prescribed measures. As a consequence of the above, one might look at the 2006 developments proposed by the Portuguese government in the fields of coastal and ocean policies in two ways. Either disregard those as additional efforts doomed to fading out over time; or give them credit as initiatives that will finally result in the development of national policies for those two areas. In relation to the proposal for an ICM strategy [1], there are few, if any, signs justifying much enthusiasm; almost one year after the publication of the proposal there is considerable uncertainty about its present standing and possible future, even among staff at the Ministry of Environment. As for the National Strategy for the Ocean [2], it might be considered a valuable advancement and looked upon with some more confidence, at least for the time being. If for no other reason, because it is in line with the government's programme [28] and because there appeared to be a certain degree of urgency in its approval. Nevertheless, a word of caution is due; the success of the whole strategy depends on two key actions: first, the creation of the CIAM, the high-level coordinating body that will promote and oversee the implementation of the ENM. Second, the elaboration of specific action plans by the various ministries in relation to the eight strategic actions of the ENM. When and how these two processes are to occur is yet unclear, and specially the latter one is expected to be met by serious difficulties in terms of coordination between the different entities and in the availability of resources. In a somewhat veiled manner, the ENM appears to attempt to establish a bridge between the ocean policy and the ICM strategy. Note is made not only of the need to harmonise the ENM with the policies directed at the coastal zone, but also in several points in the document is joint reference made to “the ocean and coastal zones” ([2], e.g. pp. 18, 20, 22, 34), suggesting that at least some of the measures proposed in the ENM are meant for those two realms. Moreover, the CIAM, albeit proposed by the ENM, will arguably suit the role of the national coordinating unit suggested in the Bases for the National Integrated Coastal Zone Management Strategy. The recognition of this latter fact would greatly contribute to overcome the relative isolation of those two policy areas and to promote the concept of integration that both advocate. It must also be borne in mind that any future policy developments in Portugal will take place amidst governmental actions to reduce public spending and limit the size of the State's apparatus. As a consequence, little support is expected for any proposals involving the creation of two separate pieces of governance framework for two policy areas that are so closely interconnected. The way forward will probably involve the establishment of ICM as one sub-area of the wider national ocean policy. There are institutional similarities justifying an integrated treatment, but there are enough specificities of ICM in relation to ocean policy to sustain the integrity of the first within the latter. As Stella Maris Vallejo noted back in 1993 ([29], p. 175): […] the coastal policy should be integrated with the national ocean policy. In this respect, the coastal policy should be considered as a sub-set of a broader ocean policy that defines the role of the oceans and coastal areas as an integrated whole, that defines long-term perspectives, values and aspirations of the country vis-à-vis the coastal areas taking into consideration all aspects of the development process that impinge upon them.