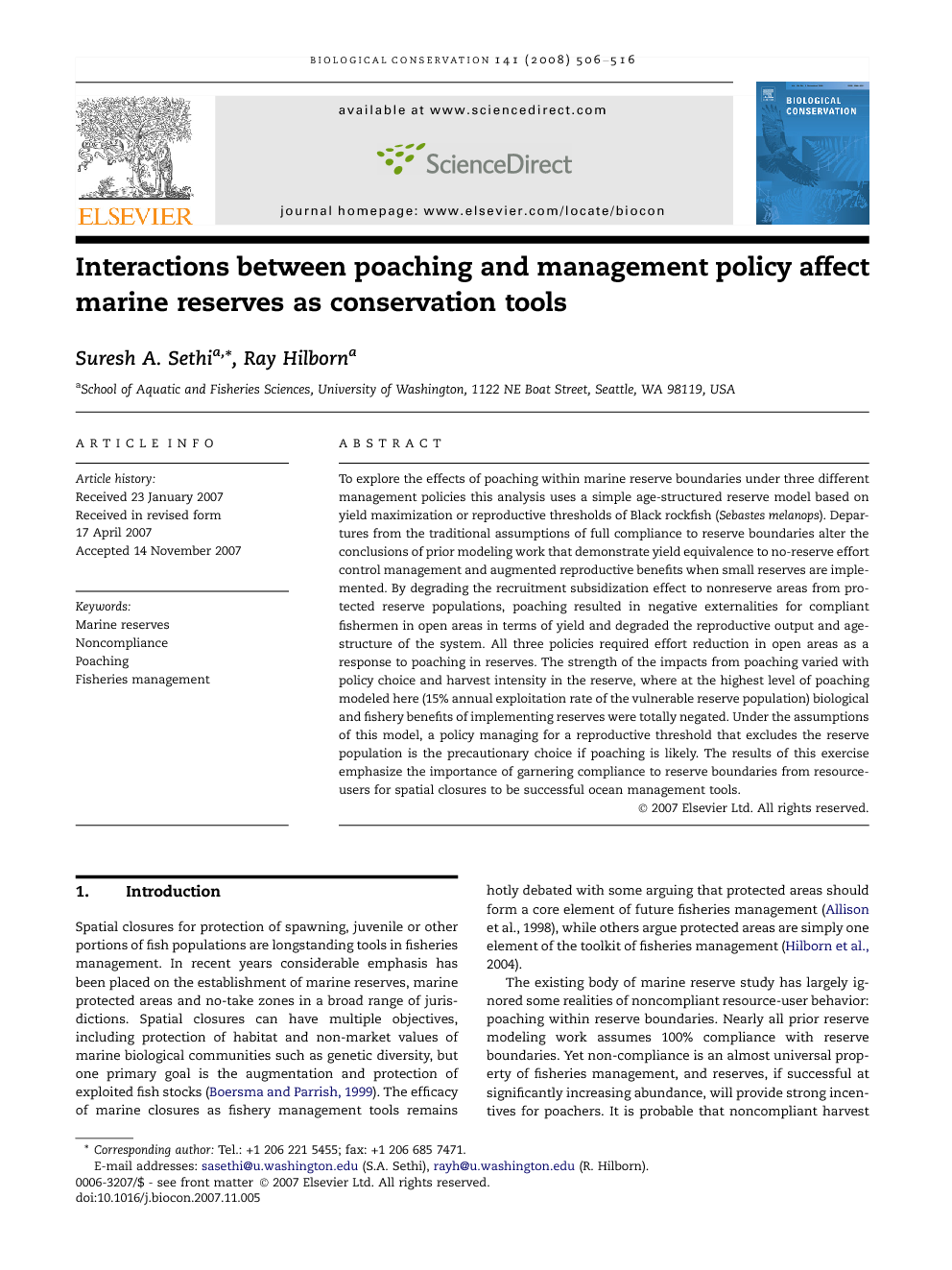 To explore the effects of poaching within marine reserve boundaries under three different management policies this analysis uses a simple age-structured reserve model based on yield maximization or reproductive thresholds of Black rockfish (Sebastes melanops). Departures from the traditional assumptions of full compliance to reserve boundaries alter the conclusions of prior modeling work that demonstrate yield equivalence to no-reserve effort control management and augmented reproductive benefits when small reserves are implemented. By degrading the recruitment subsidization effect to nonreserve areas from protected reserve populations, poaching resulted in negative externalities for compliant fishermen in open areas in terms of yield and degraded the reproductive output and age-structure of the system. All three policies required effort reduction in open areas as a response to poaching in reserves. The strength of the impacts from poaching varied with policy choice and harvest intensity in the reserve, where at the highest level of poaching modeled here (15% annual exploitation rate of the vulnerable reserve population) biological and fishery benefits of implementing reserves were totally negated. Under the assumptions of this model, a policy managing for a reproductive threshold that excludes the reserve population is the precautionary choice if poaching is likely. The results of this exercise emphasize the importance of garnering compliance to reserve boundaries from resource-users for spatial closures to be successful ocean management tools.

Spatial closures for protection of spawning, juvenile or other portions of fish populations are longstanding tools in fisheries management. In recent years considerable emphasis has been placed on the establishment of marine reserves, marine protected areas and no-take zones in a broad range of jurisdictions. Spatial closures can have multiple objectives, including protection of habitat and non-market values of marine biological communities such as genetic diversity, but one primary goal is the augmentation and protection of exploited fish stocks (Boersma and Parrish, 1999). The efficacy of marine closures as fishery management tools remains hotly debated with some arguing that protected areas should form a core element of future fisheries management (Allison et al., 1998), while others argue protected areas are simply one element of the toolkit of fisheries management (Hilborn et al., 2004). The existing body of marine reserve study has largely ignored some realities of noncompliant resource-user behavior: poaching within reserve boundaries. Nearly all prior reserve modeling work assumes 100% compliance with reserve boundaries. Yet non-compliance is an almost universal property of fisheries management, and reserves, if successful at significantly increasing abundance, will provide strong incentives for poachers. It is probable that noncompliant harvest within reserve boundaries may have a significant effect on the success of marine reserves as fishery management tools (Kritzer, 2004, Little et al., 2005 and Samoilys et al., 2007). Whenever restrictions on behavior imposed by a society misalign some individuals’ interests with that of the greater good, as in natural resource use regulation, noncompliance is inevitable (e.g. Becker, 1968). In fisheries, noncompliance is due in part to the common property nature of the resources and the expense of monitoring and enforcing regulations (Anderson, 1989). Sutinen et al. (1990) found that there have been high levels of noncompliance in New England trawl fisheries, involving overfishing as well as violations of spatial closures. Kuperan and Sutinen (1998) found empirical evidence of a separate poaching fleet of “chronic and flagrant violators” within a Malaysian fishery. While empirical studies on the extent and effects of noncompliant harvest within marine reserves are rare, anecdotal evidence suggests poaching in spatially managed systems is not uncommon (NMFS, 2003; pers. comm. with a representative of the Nature Conservancy in Seattle, WA, on Nov. 20, 2006; pers. comm. with a representative of the NZ Rock Lobster Industry Council on May 26, 2006). Davis et al. (2004) found poaching incidents within spatial closures on the Great Barrier Reef occurred at low frequencies. In cases where protected species are commercially valuable such as abalone, evidence of poaching within reserve boundaries is prevalent and in some cases highly organized (Gosling, 2003 and Hauck and Sweijd, 1999). The motivations behind poaching within reserves need not be inherently criminal. Unlike terrestrial reserves where boundaries can be marked through fences, roads, or signage, marine reserves are more difficult to delineate. Some harvest within reserves may occur as a result of fishermen not knowing the location of a reserve or whether a reserve exists (McClanahan, 1999). Marine reserves can also provide important sources of baseline data for population dynamics research. Studies on the effects of marine closures can call for sampling within closed areas, in essence a form of fishing mortality in reserves similar to poaching. The effect of scientific sampling within reserves has been noted in the design of the Great Barrier Reef Marine Park where pink zones exclude even research activity without special permission (DEH, 2006). The conservation consequences of any reserve design (location, size, pattern, etc.) are closely tied to the management situation outside of the reserve (Hilborn et al., 2006). Traditional fisheries management seeks to hold populations at some theoretically defined level that either satisfies a biomass or reproductive threshold or maximizes fishery catch, or yield. The US West coast groundfish stocks under jurisdiction of the Pacific Fisheries Management Council are based on a reference point titled the F40% rule where fish populations are reduced until the remaining spawning stock biomass reproductive output is 40% of what would be under unfished conditions (PFMC, 2006). This policy is a precautionary one that seeks to guard stocks from recruitment overfishing and ensuing collapse. Alternatively, the concept of maximum sustainable yield (MSY) still persists in US fisheries management. The Magnuson-Stevens Fishery Conservation and Management Act defines the fishing mortality rate that results in MSY, Fmsy, as an upper limit to fishing effort where it is generally accepted that fishing at Fmsy is a risky proposition due to observation and process error in stock assessment ( Mace, 2001). A large body of modeling work exists examining the biological and structural specifics of marine reserve implementation, and to a lesser extent fishery management policy implications in the context of reserves (Grafton et al., 2005 and Upton and Sutinen, 2005). To our knowledge, however, no studies have yet examined how policies managing for yield versus reproductive potential play out in a reserve system when faced with the realities of imperfect compliance. Here we present a simple age-structure model that explores the effects of poaching within reserve boundaries under three different fisheries management policy choices: (1) maximization of average yield in the area outside the reserve (2) managing the total stock, reserve and nonreserve populations combined, at the F40% reproductive output and (3) holding only the stock outside the reserve at the F40% reproductive output. For each of these policies we consider the case of exact management in open areas and the case of overfishing (with respect to the management goals) in open areas where the nonreserve fishing mortality ends up being 50% higher than prescribed by the management plan. For each of these combinations we explore the impacts of different levels of poaching within reserves on the fishery and biological performance of the system. While there are little to no data available on intensity of poaching within closed areas, modeling can provide some initial insight into the effects of noncompliance in the marine reserve-fishery context. It is hoped that this exercise will help inform marine reserve managers and designers as to how management policies in open areas perform in terms of yield or reproduction goals in the face of noncompliance.