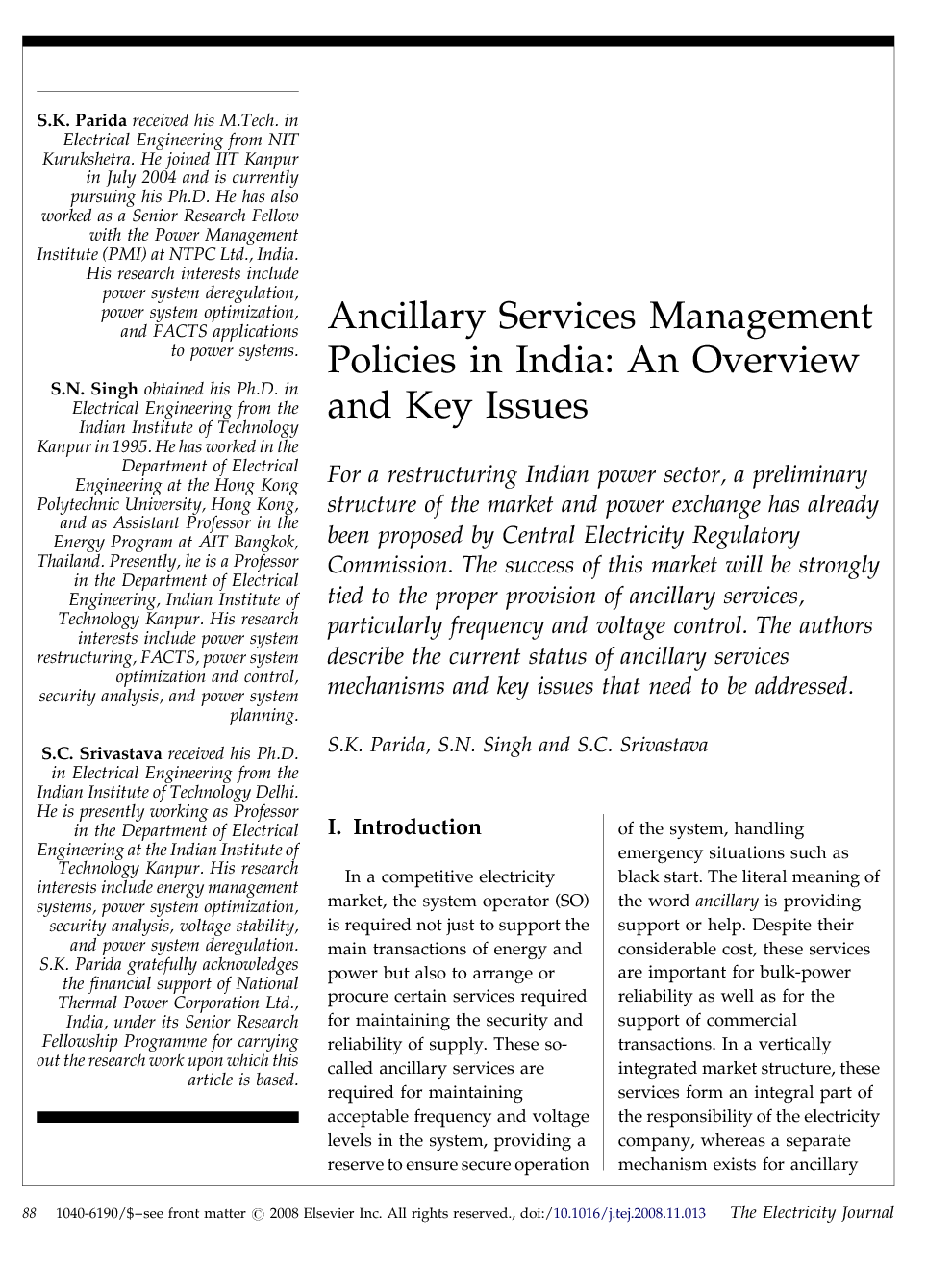 For a restructuring Indian power sector, a preliminary structure of the market and power exchange has already been proposed by Central Electricity Regulatory Commission. The success of this market will be strongly tied to the proper provision of ancillary services, particularly frequency and voltage control. The authors describe the current status of ancillary services mechanisms and key issues that need to be addressed.

In a competitive electricity market, the system operator (SO) is required not just to support the main transactions of energy and power but also to arrange or procure certain services required for maintaining the security and reliability of supply. These so-called ancillary services are required for maintaining acceptable frequency and voltage levels in the system, providing a reserve to ensure secure operation of the system, handling emergency situations such as black start. The literal meaning of the word ancillary is providing support or help. Despite their considerable cost, these services are important for bulk-power reliability as well as for the support of commercial transactions. In a vertically integrated market structure, these services form an integral part of the responsibility of the electricity company, whereas a separate mechanism exists for ancillary services in a deregulated electricity market. Different countries or regions adopt different methods for ancillary services management. In some countries, ancillary services are procured through a competitive market mechanism1 alongside the energy market. The markets for energy and ancillary services clear simultaneously with clearing volumes and prices for energy and ancillary services, respectively. Some countries or regions adopt a regulatory approach towards ancillary services procurement and remuneration.2,3 With enactment of the Electricity Act 2003, the Indian power sector is undergoing a restructuring process. Unbundling of generation, transmission, and distribution services have already been carried out in different states. A central regulatory organization, known as the Central Electricity Regulatory Commission (CERC), has been formed to take care of the regulatory aspects of the ongoing restructuring process. Regional load dispatch centers (RLDCs) which function like a system operator have already been set up. They prepare dispatch and drawal schedules for generators and beneficiaries, respectively, on a day-ahead basis with respect to the availability of generation and forecasted demand considering system security and reliability. RLDCs are also responsible for maintaining a balance between generation and demand in real-time operation, and for providing reactive power support. Though the term ancillary service has not been used in the present structure of the Indian power sector, the frequency control and voltage control services are best provided through certain regulatory mechanisms. In this article, a generic and detailed classification of ancillary services is offered in Section II. Different approaches for procurement and remuneration of ancillary services are discussed in Section III. The status quo of the Indian power industry is discussed in Section IV, followed by a discussion about the provision of ancillary services in Section V. The key issues and challenges in providing ancillary services are discussed in Section VI. Some conclusions are drawn in Section VII.