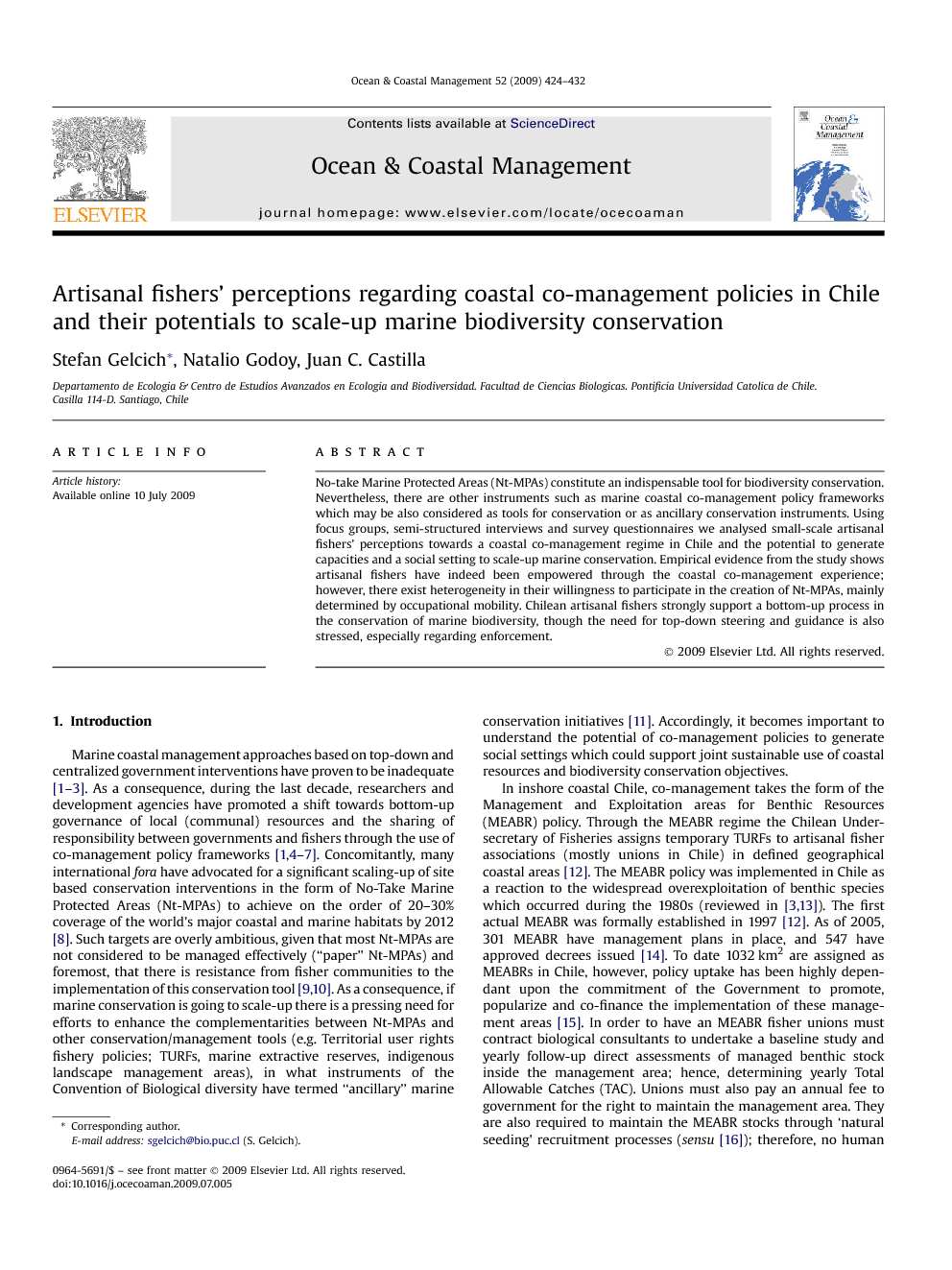 No-take Marine Protected Areas (Nt-MPAs) constitute an indispensable tool for biodiversity conservation. Nevertheless, there are other instruments such as marine coastal co-management policy frameworks which may be also considered as tools for conservation or as ancillary conservation instruments. Using focus groups, semi-structured interviews and survey questionnaires we analysed small-scale artisanal fishers' perceptions towards a coastal co-management regime in Chile and the potential to generate capacities and a social setting to scale-up marine conservation. Empirical evidence from the study shows artisanal fishers have indeed been empowered through the coastal co-management experience; however, there exist heterogeneity in their willingness to participate in the creation of Nt-MPAs, mainly determined by occupational mobility. Chilean artisanal fishers strongly support a bottom-up process in the conservation of marine biodiversity, though the need for top-down steering and guidance is also stressed, especially regarding enforcement.

Marine coastal management approaches based on top-down and centralized government interventions have proven to be inadequate [1], [2] and [3]. As a consequence, during the last decade, researchers and development agencies have promoted a shift towards bottom-up governance of local (communal) resources and the sharing of responsibility between governments and fishers through the use of co-management policy frameworks [1], [4], [5], [6] and [7]. Concomitantly, many international fora have advocated for a significant scaling-up of site based conservation interventions in the form of No-Take Marine Protected Areas (Nt-MPAs) to achieve on the order of 20–30% coverage of the world's major coastal and marine habitats by 2012 [8]. Such targets are overly ambitious, given that most Nt-MPAs are not considered to be managed effectively (“paper” Nt-MPAs) and foremost, that there is resistance from fisher communities to the implementation of this conservation tool [9] and [10]. As a consequence, if marine conservation is going to scale-up there is a pressing need for efforts to enhance the complementarities between Nt-MPAs and other conservation/management tools (e.g. Territorial user rights fishery policies; TURFs, marine extractive reserves, indigenous landscape management areas), in what instruments of the Convention of Biological diversity have termed “ancillary” marine conservation initiatives [11]. Accordingly, it becomes important to understand the potential of co-management policies to generate social settings which could support joint sustainable use of coastal resources and biodiversity conservation objectives. In inshore coastal Chile, co-management takes the form of the Management and Exploitation areas for Benthic Resources (MEABR) policy. Through the MEABR regime the Chilean Undersecretary of Fisheries assigns temporary TURFs to artisanal fisher associations (mostly unions in Chile) in defined geographical coastal areas [12]. The MEABR policy was implemented in Chile as a reaction to the widespread overexploitation of benthic species which occurred during the 1980s (reviewed in [3] and [13]). The first actual MEABR was formally established in 1997 [12]. As of 2005, 301 MEABR have management plans in place, and 547 have approved decrees issued [14]. To date 1032 km2 are assigned as MEABRs in Chile, however, policy uptake has been highly dependant upon the commitment of the Government to promote, popularize and co-finance the implementation of these management areas [15]. In order to have an MEABR fisher unions must contract biological consultants to undertake a baseline study and yearly follow-up direct assessments of managed benthic stock inside the management area; hence, determining yearly Total Allowable Catches (TAC). Unions must also pay an annual fee to government for the right to maintain the management area. They are also required to maintain the MEABR stocks through ‘natural seeding’ recruitment processes (sensu [16]); therefore, no human induced restocking is allowed. 1 Additionally, only resources included in management plans can be extracted from the MEABR. The biological-fishery success of the MEABR policy has been publicised through scientific and government documents which showed a significant increase in abundance and individual size of targeted resources within MEABR in comparison with open-access sites [16], [17] and [18]. Recently, Gelcich et al. [19] also showed how MEABRs, showing efficient enforcement programmes, sustained greater marine biodiversity than open-access areas. In addition the Fisheries Undersecretary sees MEABR implementation as a positive change in which fisher communities have self-organised, creating partnership with the government, universities and consultants [20]. In this way, artisanal fishing coves are being consolidated responding to government incentives. Studies have identified that livelihood characteristics could influence fishers' attitudes towards the policy [21] and [7]. In the same vein, research has shown positive shifts in some environmental perceptions of fishers who have engaged with the policy [20] and [22]. Despite the effort which has been devoted to the generation and implementation of this policy model in Chile, to date there are few empirical studies assessing fishers' perceptions of the policy process and about the possible generation of the social settings (social support), in the artisanal fisher communities, for marine biodiversity conservation. The plans to scale-up marine conservation in Chile were institutionalized by the government in 2003 via the approval of a National Strategy for Biodiversity (Estrategia Nacional de Biodiversidad). In the process (2001–2003) the National Commission on the Environment (CONAMA) identified 305 key sites in Chile for the conservation of ecosystems (biodiversity conservation). Of these only 28 corresponded to marine sites. The targets of this national plan are set for 2006, 2010 and 2015. For 2006 the marine conservation target consisted on the implementation of three Marine Protected Areas for Multiple Uses (MU-MPA) which should include a core Nt-MPA zone. To date these areas have been implemented, nevertheless, the NT-MPA zones have still not been defined [23]. For 2015 the target is that all MU-MPA should be fully implemented and institutionalised as a network. However a understanding of fishers' perceptions of this process has been largely absent. The broad thrust of our research aims to analyse Chilean artisanal fishers' perceptions regarding a well established fishery co-management regime (i.e., TURFs and MEABRs) and its potential to generate a social setting which may help to support the scaling-up of marine conservation practices. In doing this our objectives are: (1) to understand fishers' perceptions of the TURFs/MEABR policy processes with respect to (a) compliance, (b) enforcement, (c) empowerment, (d) main problems/conflicts and future challenges. (2) To evaluate fishers' perceptions regarding biodiversity conservation associated to MEABRs and fishers view of the MU-MPA plan, specifically the Nt-MPA component, to be implemented in Chile. (3) To assess fishers' determinants of their willingness to participate in the administration and management of an MU-MPA network in Chile. Hopefully these analyses will inform related policy developments aimed at integrating the sustainable use of coastal resources and biodiversity conservation.

Networks of MEABRs in combination with MU-MPAs which include Nt-MPAs as those suggested by [3] and [9] can be viewed as a conservation-management tool which could contribute to policy coherence and establish a collaborative framework that would help legitimise marine conservation practices through public participation. The lessons from this empirical study are that in Chile co-management practices have provided a learning platform for artisanal fisher communities. This helps to establish a social setting in which local fisher communities may become important actors for supporting marine conservation, so long as it involves meaningful local involvement. Thus, in Chile there is a strong potential for bottom-up processes in marine conservation, though the need for top-down steering and guidance is also stressed, especially regarding support for enforcement.