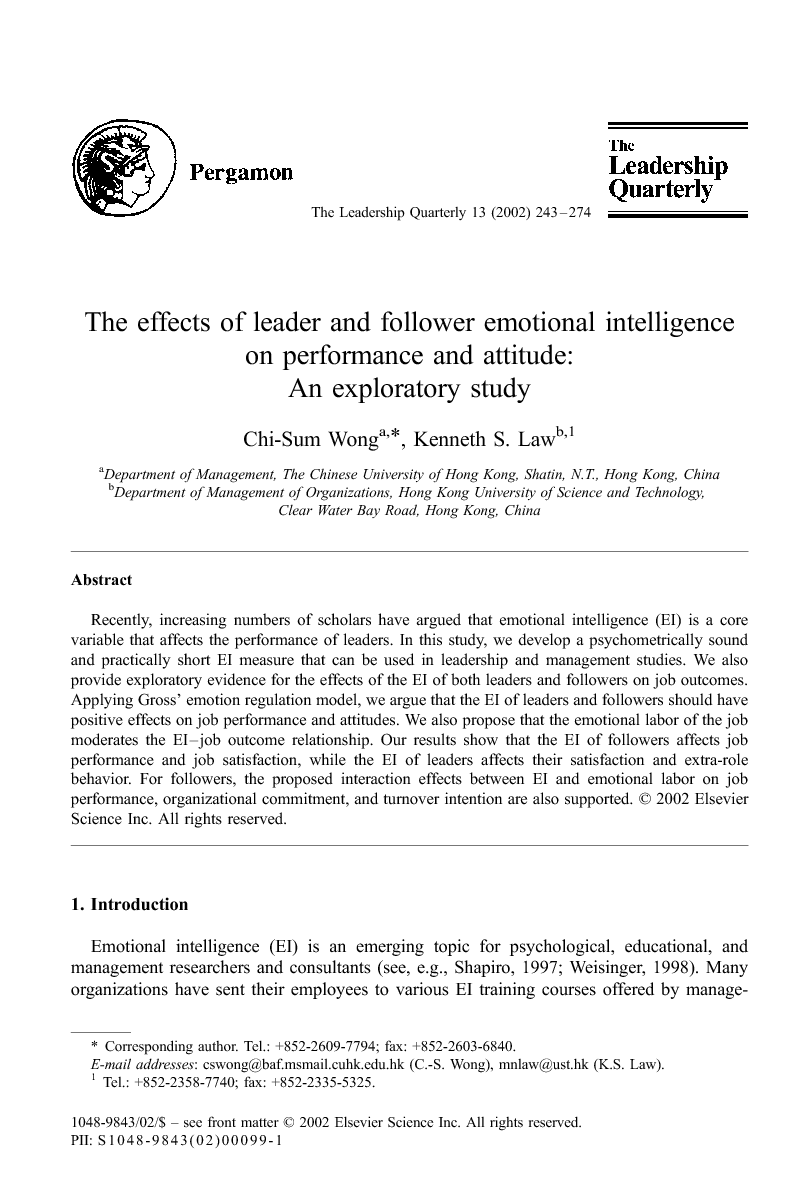 Recently, increasing numbers of scholars have argued that emotional intelligence (EI) is a core variable that affects the performance of leaders. In this study, we develop a psychometrically sound and practically short EI measure that can be used in leadership and management studies. We also provide exploratory evidence for the effects of the EI of both leaders and followers on job outcomes. Applying Gross' emotion regulation model, we argue that the EI of leaders and followers should have positive effects on job performance and attitudes. We also propose that the emotional labor of the job moderates the EI–job outcome relationship. Our results show that the EI of followers affects job performance and job satisfaction, while the EI of leaders affects their satisfaction and extra-role behavior. For followers, the proposed interaction effects between EI and emotional labor on job performance, organizational commitment, and turnover intention are also supported.

Emotional intelligence (EI) is an emerging topic for psychological, educational, and management researchers and consultants (see, e.g., Shapiro, 1997 and Weisinger, 1998). Many organizations have sent their employees to various EI training courses offered by management consultants. Proponents of the EI concept argue that EI affects one's physical and mental health as well as one's career achievements (e.g., Goleman, 1995). Some emerging leadership theories also imply that emotional and social intelligence are even more important for leaders and managers because cognitive and behavioral complexity and flexibility are important characteristics of competent leaders (Boal & Whitehead, 1992). However, there is little empirical evidence in the literature about the relationship between the EI of both leaders and followers and their job outcomes. One of the reasons for this gap may be the lack of a psychologically sound yet practically short measure of EI that can be used in leadership and management studies. The project reported in this paper was designed to develop such a measure and provide exploratory evidence concerning the effect of the EI of both leaders and followers on job outcomes. The purpose of this multisample, multistudy project is threefold. Firstly, the core concepts of EI and emotional labor are discussed and hypotheses are developed concerning their role in leadership and management research. EI is referred to as a set of interrelated abilities possessed by individuals to deal with emotions, while emotional labor is referred to as emotion-related job requirements imposed by organizations. Thus, EI is a particular set of an individual's abilities, while emotional labor represents a particular type of job demand. Secondly, we develop a short but psychologically sound measure of EI for research on leadership and management in our first empirical study. Finally, in the second and third studies, we test the relationships between the EI of followers and leaders and their job outcomes, and the proposed moderating effects of emotional labor on the EI–job outcome relationship of followers. This article is organized as follows. We first discuss the importance of EI for leaders as suggested in the leadership literature, and review the constructs of EI and emotional labor. Then, the potential moderating effect of emotional labor on the EI–job outcome relationship is discussed within the framework of the emotion regulation model. After proposing our hypotheses, we report Study 1 in which a 16-item EI scale is developed. In Study 2, this EI scale is applied to 149 supervisor–subordinate dyads and the follower EI–job outcome relationship and the moderating effects of emotional labor are tested. In Study 3, the EI scale is applied to another supervisor–subordinate dyad to examine the effect of leader EI on follower job outcomes. The article concludes with a discussion of the general contribution of this study to the management and leadership literature on EI.