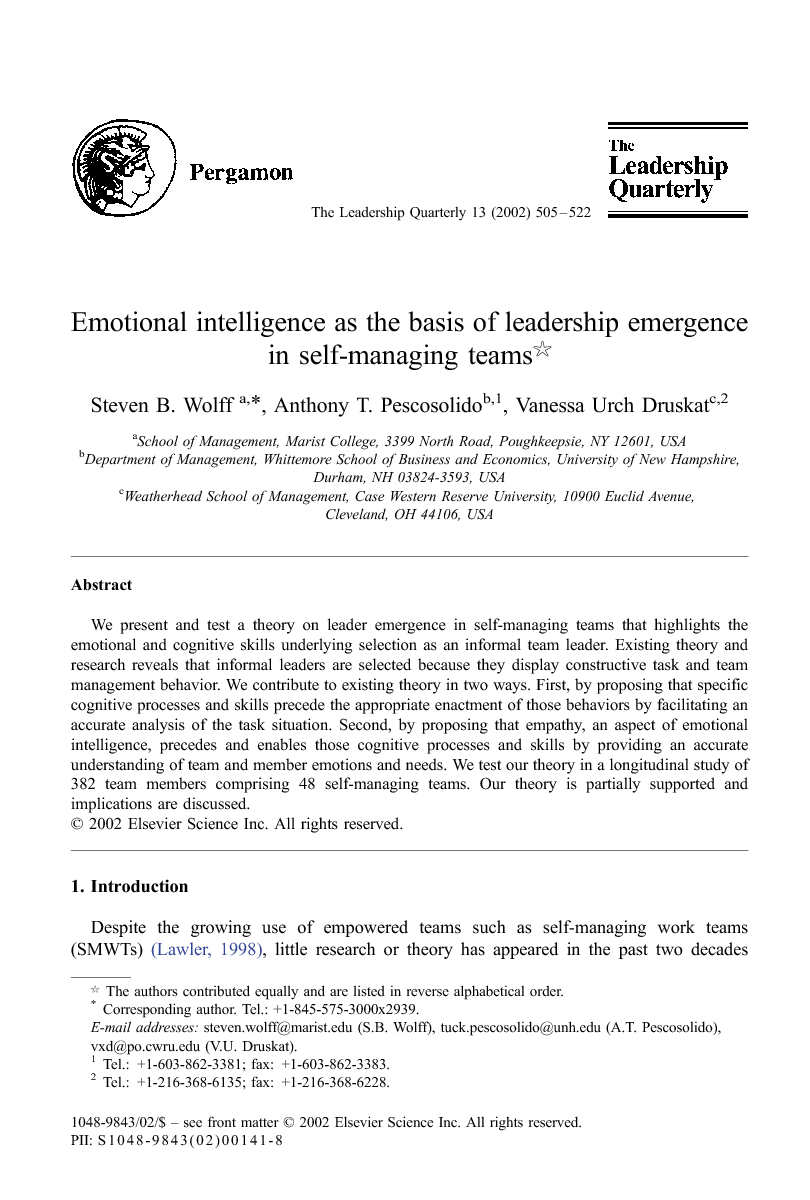 We present and test a theory on leader emergence in self-managing teams that highlights the emotional and cognitive skills underlying selection as an informal team leader. Existing theory and research reveals that informal leaders are selected because they display constructive task and team management behavior. We contribute to existing theory in two ways. First, by proposing that specific cognitive processes and skills precede the appropriate enactment of those behaviors by facilitating an accurate analysis of the task situation. Second, by proposing that empathy, an aspect of emotional intelligence, precedes and enables those cognitive processes and skills by providing an accurate understanding of team and member emotions and needs. We test our theory in a longitudinal study of 382 team members comprising 48 self-managing teams. Our theory is partially supported and implications are discussed.

Despite the growing use of empowered teams such as self-managing work teams (SMWTs) (Lawler, 1998), little research or theory has appeared in the past two decades to help answer persistent questions about their leadership needs Cohen et al., 1997 and Druskat & Wheeler, in press. One subject that has received some research attention is leadership emergence in SMWTs, and in particular, assessment of the behaviors that predict one's emergence as an informal team leader Smith & Foti, 1998 and Taggar et al., 1999. Emergent team leaders hold no formal authority and team willingness to follow their lead can end at any time. Thus, theory and research attempting to isolate why certain individuals are selected for the role lends insight into perceived leadership needs in SMWTs. Existing research reveals that the behaviors predicting one's emergence as an informal leader can be organized into two categories—task- and member-focused behavior—and that task-focused behaviors (e.g., task coordination) are the strongest predictors (see Bales, 1950, Lord, 1977 and Taggar et al., 1999). To date, however, little research or theory has sought to identify the knowledge, skills, and abilities (KSAs) that underlie and enable the behaviors that predict emergence. In this article, we introduce and test a model of the KSAs that predict leadership emergence in SMWTs. Our model underscores the relevance of emotional and cognitive skills to the exhibition of the behaviors that predict leader emergence. It combines three propositions drawn from previous leadership theory that serve as the basis of the model: (1) that emergent leaders are socially perceptive and skilled at recognizing and understanding the feelings and emotions in their team (see Chowdhry & Newcomb, 1952 and Steiner, 1972), (2) that this understanding augments a leader's cognitive analysis and prioritization of issues facing the team (see Salovey et al., 2000 and Zajonc, 1998), and (3) that the high quality cognitive analysis underlies and leads to the skilled behavior (see Bandura, 1982) that predicts leader emergence. We combine these propositions to introduce and test a model suggesting the specific KSAs necessary for attaining informal leadership status in a self-managing team. For the purposes of our study, informal leadership status was assessed by the percentage of teammate votes each member received for “informal leader.” We begin with our literature review and the presentation of our study hypotheses, which are presented from back to front. That is, we start by describing the skilled behaviors we propose to be most directly related to emergence as an informal team leader. We then present the cognitive skills that support those behaviors. Lastly, we present the emotional skill that we propose to be the basis of leadership emergence.