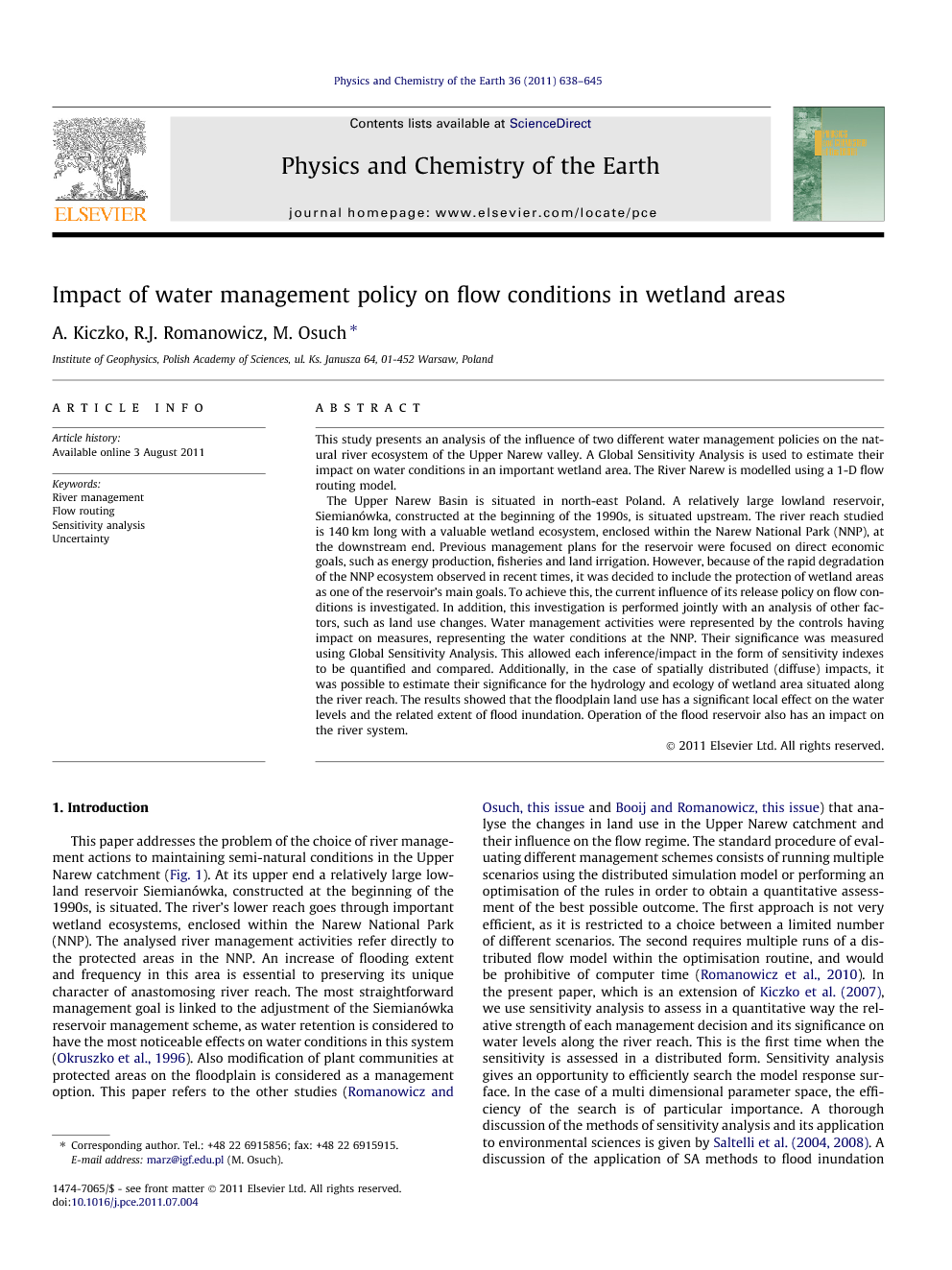 This study presents an analysis of the influence of two different water management policies on the natural river ecosystem of the Upper Narew valley. A Global Sensitivity Analysis is used to estimate their impact on water conditions in an important wetland area. The River Narew is modelled using a 1-D flow routing model. The Upper Narew Basin is situated in north-east Poland. A relatively large lowland reservoir, Siemianówka, constructed at the beginning of the 1990s, is situated upstream. The river reach studied is 140 km long with a valuable wetland ecosystem, enclosed within the Narew National Park (NNP), at the downstream end. Previous management plans for the reservoir were focused on direct economic goals, such as energy production, fisheries and land irrigation. However, because of the rapid degradation of the NNP ecosystem observed in recent times, it was decided to include the protection of wetland areas as one of the reservoir’s main goals. To achieve this, the current influence of its release policy on flow conditions is investigated. In addition, this investigation is performed jointly with an analysis of other factors, such as land use changes. Water management activities were represented by the controls having impact on measures, representing the water conditions at the NNP. Their significance was measured using Global Sensitivity Analysis. This allowed each inference/impact in the form of sensitivity indexes to be quantified and compared. Additionally, in the case of spatially distributed (diffuse) impacts, it was possible to estimate their significance for the hydrology and ecology of wetland area situated along the river reach. The results showed that the floodplain land use has a significant local effect on the water levels and the related extent of flood inundation. Operation of the flood reservoir also has an impact on the river system.

This paper addresses the problem of the choice of river management actions to maintaining semi-natural conditions in the Upper Narew catchment (Fig. 1). At its upper end a relatively large lowland reservoir Siemianówka, constructed at the beginning of the 1990s, is situated. The river’s lower reach goes through important wetland ecosystems, enclosed within the Narew National Park (NNP). The analysed river management activities refer directly to the protected areas in the NNP. An increase of flooding extent and frequency in this area is essential to preserving its unique character of anastomosing river reach. The most straightforward management goal is linked to the adjustment of the Siemianówka reservoir management scheme, as water retention is considered to have the most noticeable effects on water conditions in this system (Okruszko et al., 1996). Also modification of plant communities at protected areas on the floodplain is considered as a management option. This paper refers to the other studies (Romanowicz and Osuch, this issue and Booij and Romanowicz, this issue) that analyse the changes in land use in the Upper Narew catchment and their influence on the flow regime. The standard procedure of evaluating different management schemes consists of running multiple scenarios using the distributed simulation model or performing an optimisation of the rules in order to obtain a quantitative assessment of the best possible outcome. The first approach is not very efficient, as it is restricted to a choice between a limited number of different scenarios. The second requires multiple runs of a distributed flow model within the optimisation routine, and would be prohibitive of computer time (Romanowicz et al., 2010). In the present paper, which is an extension of Kiczko et al. (2007), we use sensitivity analysis to assess in a quantitative way the relative strength of each management decision and its significance on water levels along the river reach. This is the first time when the sensitivity is assessed in a distributed form. Sensitivity analysis gives an opportunity to efficiently search the model response surface. In the case of a multi dimensional parameter space, the efficiency of the search is of particular importance. A thorough discussion of the methods of sensitivity analysis and its application to environmental sciences is given by Saltelli et al., 2004 and Saltelli et al., 2008. A discussion of the application of SA methods to flood inundation modelling is given by Pappenberger et al. (2008). In particular, the authors discuss local and global aspects of sensitivity analysis. Local sensitivity analysis concentrates on the local impact of factors on the model output around a specific point of a parameter space, whilst Global Sensitivity Analysis (GSA) (Sobol, 1993) gives a wider image of the model response surface in a multidimensional parameter space taking into account parameter interactions. The sensitivity analysis based on Regional Splitting (SARS-RT) was used by Pappenberger et al. (2006) to estimate the influence of upstream boundary conditions, described by the rating curve uncertainty, and bridge structure on water level predictions. Hall et al. (2005) applied sensitivity analysis to flood inundation models to find the areas in which channel roughness has the largest influence on model predictions. In those applications, sensitivity analysis was used as a tool for the improvement of model predictions and their uncertainties. In the present paper we apply sensitivity analysis to investigate the impact of different model parameters including floodplain roughness coefficients and capacity of the reservoir, representing different management options, on the model output in the form of distributed water levels along the river reach of particular interest. The 8 km long river reach, named the study reach (Fig. 1), in the NNP is used for a comparison of the effects of management policies. One-Dimensional Unsteady Flow Through a Full Network of Open Channels model (HEC-UNET), developed by the US Army Corps of Engineers Hydrologic Engineering Centers (Barkau, 1993) is used for flow routing for a 140 km long river reach stretching from the reservoir Siemianówka down to the end of NNP and enclosing the study reach at its lower end (Fig. 1). An initial identification of model parameters is performed using deterministic optimization, followed by the statistical informal Bayesian approach (Romanowicz and Beven, 2006 and Smith et al., 2008). During the sensitivity studies we use the information about first and second moments of the relevant parameter distribution to build the GSA sample. In order to obtain distributed sensitivity indices, the study reach was sampled with irregular distances between cross-sections from 5 m up to 200 m. 400 cross-sections were introduced along the study reach that provided outputs for the sensitivity analysis in the form of mean, minimum and maximum water levels. Therefore, our approach is opposite that usually taken, as the GSA described here follows uncertainty analysis and not vice versa. In the following sections we present the study area and describe the water management policies in the catchment. The approach is formulated in Section 3, together with a description of the methods applied in the paper. The results of the analysis are discussed in Sections 4 and 5 gives the conclusions.

In conclusion, the GSA techniques applied to the analysis of different water management strategies has enabled a quantitative assessment of their impact for one hydrological year (01.11.1982–31.10.1983). A 1-D flow routing model was used for a simulation of the influence of different management policies on water conditions in the NNP. In order to assess the impact of the reservoir, the model was applied to the whole 140 km long River Narew reach from the Siemianówka reservoir down to the middle of the NNP. The GSA was applied to the minimum, average and maximum water levels from the 8 km long sub-reach shown in Fig. 1, represented by 400 cross-sections The novelty of the approach lies in the derivation of spatially distributed sensitivity indices for a study reach and their application to a comparison of different management policies. These included the influence of the storage reservoir capacity and land use changes on the floodplains within the whole studied NNP reach. The results show that the Siemianówka reservoir has a significant impact on average water conditions in the chosen reach of the NNP. The extreme (minimum and maximum) discharges in the analysed period are not influenced by the reservoir. The analysis of historical discharges for Suraż (Romanowicz and Osuch, this issue) gives similar results. Nevertheless, the reservoir can be used to shape average water conditions at protected areas. The changes in land use on the left and right floodplains were modelled along the whole NNP reach and their influence is well represented. The GSA shows that the floodplain roughness has the largest impact on water conditions in the study reach and this result should be considered in future water management plans. The study has also shown that local river geometry is a very important factor determining the sensitivity of model output to model parameters.