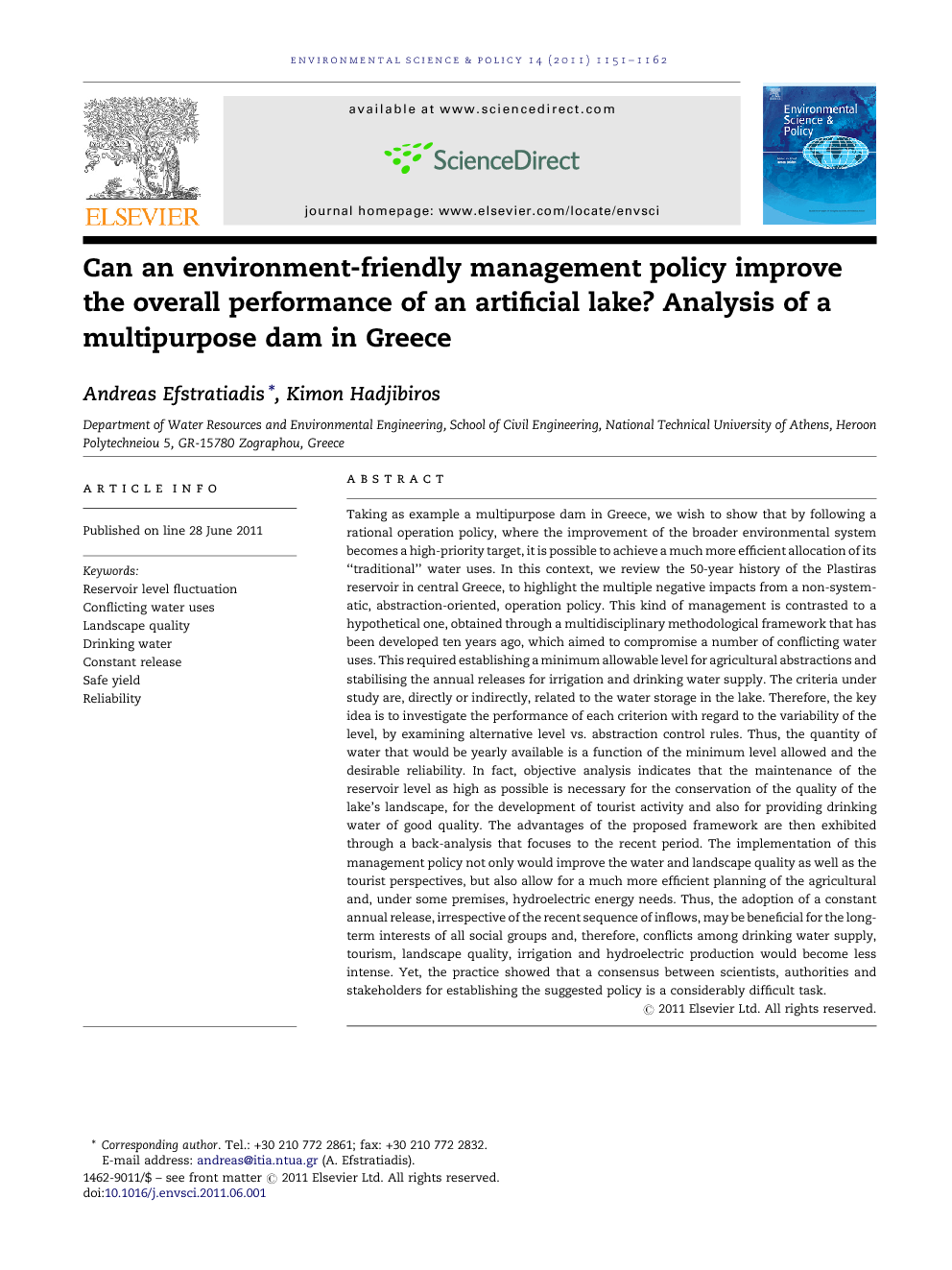 Taking as example a multipurpose dam in Greece, we wish to show that by following a rational operation policy, where the improvement of the broader environmental system becomes a high-priority target, it is possible to achieve a much more efficient allocation of its “traditional” water uses. In this context, we review the 50-year history of the Plastiras reservoir in central Greece, to highlight the multiple negative impacts from a non-systematic, abstraction-oriented, operation policy. This kind of management is contrasted to a hypothetical one, obtained through a multidisciplinary methodological framework that has been developed ten years ago, which aimed to compromise a number of conflicting water uses. This required establishing a minimum allowable level for agricultural abstractions and stabilising the annual releases for irrigation and drinking water supply. The criteria under study are, directly or indirectly, related to the water storage in the lake. Therefore, the key idea is to investigate the performance of each criterion with regard to the variability of the level, by examining alternative level vs. abstraction control rules. Thus, the quantity of water that would be yearly available is a function of the minimum level allowed and the desirable reliability. In fact, objective analysis indicates that the maintenance of the reservoir level as high as possible is necessary for the conservation of the quality of the lake's landscape, for the development of tourist activity and also for providing drinking water of good quality. The advantages of the proposed framework are then exhibited through a back-analysis that focuses to the recent period. The implementation of this management policy not only would improve the water and landscape quality as well as the tourist perspectives, but also allow for a much more efficient planning of the agricultural and, under some premises, hydroelectric energy needs. Thus, the adoption of a constant annual release, irrespective of the recent sequence of inflows, may be beneficial for the long-term interests of all social groups and, therefore, conflicts among drinking water supply, tourism, landscape quality, irrigation and hydroelectric production would become less intense. Yet, the practice showed that a consensus between scientists, authorities and stakeholders for establishing the suggested policy is a considerably difficult task.

Dams and artificial lakes are major human interventions to the landscape, having both positive and negative impacts on the broader environment (Brismar, 2004). The typical conflict between ecologists and engineers on the actual role of reservoirs arises from the inflexible assumptions that such projects cause, from the one aspect, violent environmental changes, or, from the other viewpoint, they are essential infrastructures, whose optimal performance depends on the maximisation of abstractions. More integrated approaches emphasise on taking advantage of the multipurpose character of such projects, following a rational management policy under a system-based framework that compromises the conflicting objectives related to their operation (Grigg, 1996 and Collins et al., 2007). Yet, for most stakeholders, an evident objection is that, by accounting for more and more environmental issues within the management of reservoirs, their hydrological performance will be substantially decreased. This objection is based on the assumption that an optimal operation policy is established, by imposing a constant target-release through the reservoir to fulfil “traditional” water uses, such as water supply, irrigation and hydroelectric production. This amount, usually referred as annual safe yield, should be less than the mean annual inflow, in order to ensure an acceptable reliability level, regarding the satisfaction of demands or, equivalently, a low failure probability (annual frequency of deficits; Koutsoyiannis, 2005). Obviously, the incorporation of ecological, environmental or water quality objectives within reservoir management either results to a safe yield less than the maximum feasible or decreases the reliability of a specific target-release. In fact, since these objectives are typically addressed as constraints on the reservoir outflows and elevations (Jager and Smith, 2008) they restrict the regulating capacity of the reservoir, which in turn reduces the abstractions ensured with a specific reliability level. Recent advances in a number of scientific and technological fields (hydrology, ecology, social and economic sciences, decision support systems, etc.) allowed for providing integrated, rational and balancing solutions to a wide range of multicriteria optimisation problems in water resources, including the management of single or multiple reservoir schemes (Labadie, 2004). In this respect, a number of successful examples are reported in the recent literature, dealing with the incorporation of ecological criteria in reservoir operation (e.g., Suen and Eheart, 2006, Chaves and Kojiri, 2007, Kerachian and Karamouz, 2007, Jager and Smith, 2008, Parisopoulos et al., 2009, Yin et al., 2010, Cui et al., 2010 and Sulis et al., 2011). The targets of this paper are, to some extent, different. Examining the case of an old hydroelectric dam in Greece, whose operation has diachronically been far from optimal, we contrast the actual, abstraction-oriented, practice, in which, however, reliability issues are not accounted for, to the hypothetical implementation of a both rational and environment-friendly management policy, founded on a multidisciplinary methodological framework. In the second case, a restriction on the agricultural abstractions is imposed, by means of a minimum level constraint, in order to allocate part of the reservoir storage for other water uses (e.g., water supply) and related economic activities (e.g., tourism), as well as for environmental purposes. Theoretical investigations, using synthetic hydrological data, as well as back-analysis of the reservoir operation, based on simulations with historical inflows, clearly show that this policy not only protects (and improves) the water and landscape quality and tourist perspectives, but also allows for a much more efficient planning of its consumptive water uses (water supply, irrigation). In addition, the stabilisation of abstractions, on an annual basis, ensures better sharing of the available water resources between hydrologically rich and poor periods. Yet, despite the advantages of the proposed strategy, it proved rather impossible for both authorities and stakeholders to abandon the established management practices. Possible reasons of this failure, which are out of the frontiers of a technical study, are also discussed in the paper. Apart form the introduction (Section 1), the paper is organised as follows: in Section 2, after a short description of the system under study, we explain its conflicting objectives through a critical review of the historical management practices. In Section 3 we present the methodological framework for providing rational management practices; its grounds are based on previous analyses (NTUA Research Group, 2002), while parts of the methodology, as well as the hydrological data, have been enhanced and updated for the scope of this study. Next, for each one of the water uses or criteria, the theoretical operation policy is contrasted to the actual one, in order to further reveal the advantages of a rational management, on a practical basis. Section 6 discusses the difficulties in the implementation of the proposed management plan, after a decade from its formal submission, while the last section codifies the main conclusions.

The above analysis of the multipurpose Plastiras reservoir indicates that the conflict between environmental protection and exploitation of its water resources, which is translated to economic performance, may be a problem having efficient technical solutions but facing social constraints. It has been shown that water abstractions and ecological quality are not necessarily conflicting objectives; moreover, environment-friendly management can optimise the overall reservoir performance and promote new economic activities, such as tourism. Modelling of the reservoir operation according to the proposed policy indicates that all economic activities, even the agricultural needs for irrigation, as well as the landscape and water quality, would benefit from a rational management; in the long term, the annual amount provided for irrigation would often exceed the annual historical abstractions. Therefore, a win-win situation would be possible, where conflicts among drinking water supply, tourism, landscape quality, irrigation, and energy production would become less intense.