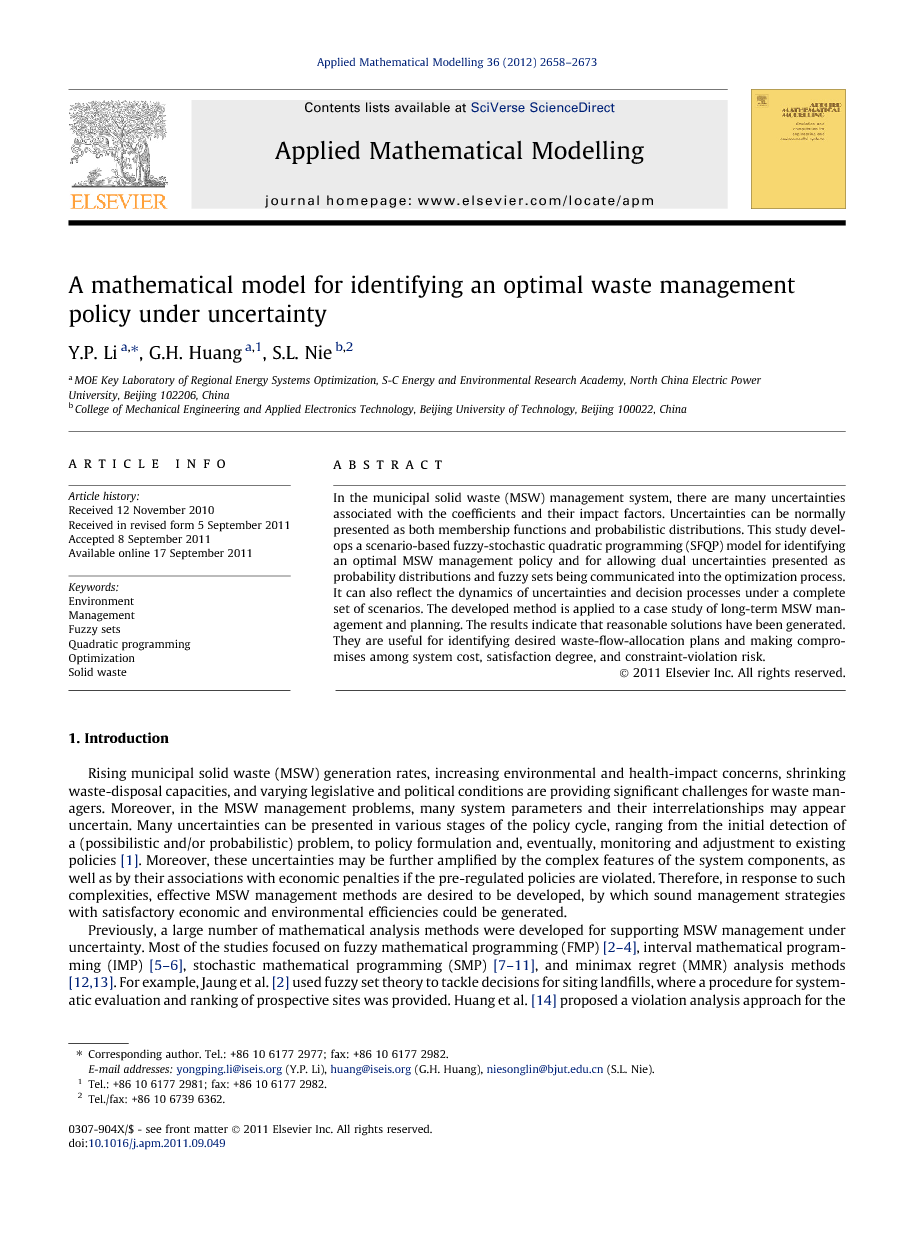 In the municipal solid waste (MSW) management system, there are many uncertainties associated with the coefficients and their impact factors. Uncertainties can be normally presented as both membership functions and probabilistic distributions. This study develops a scenario-based fuzzy-stochastic quadratic programming (SFQP) model for identifying an optimal MSW management policy and for allowing dual uncertainties presented as probability distributions and fuzzy sets being communicated into the optimization process. It can also reflect the dynamics of uncertainties and decision processes under a complete set of scenarios. The developed method is applied to a case study of long-term MSW management and planning. The results indicate that reasonable solutions have been generated. They are useful for identifying desired waste-flow-allocation plans and making compromises among system cost, satisfaction degree, and constraint-violation risk.

Rising municipal solid waste (MSW) generation rates, increasing environmental and health-impact concerns, shrinking waste-disposal capacities, and varying legislative and political conditions are providing significant challenges for waste managers. Moreover, in the MSW management problems, many system parameters and their interrelationships may appear uncertain. Many uncertainties can be presented in various stages of the policy cycle, ranging from the initial detection of a (possibilistic and/or probabilistic) problem, to policy formulation and, eventually, monitoring and adjustment to existing policies [1]. Moreover, these uncertainties may be further amplified by the complex features of the system components, as well as by their associations with economic penalties if the pre-regulated policies are violated. Therefore, in response to such complexities, effective MSW management methods are desired to be developed, by which sound management strategies with satisfactory economic and environmental efficiencies could be generated. Previously, a large number of mathematical analysis methods were developed for supporting MSW management under uncertainty. Most of the studies focused on fuzzy mathematical programming (FMP) [2], [3] and [4], interval mathematical programming (IMP) [5] and [6], stochastic mathematical programming (SMP) [7], [8], [9], [10] and [11], and minimax regret (MMR) analysis methods [12] and [13]. For example, Jaung et al. [2] used fuzzy set theory to tackle decisions for siting landfills, where a procedure for systematic evaluation and ranking of prospective sites was provided. Huang et al. [14] proposed a violation analysis approach for the planning of solid waste management systems under uncertainty, based on methods of interval-parameter fuzzy linear programming and regret analysis. Nie et al. [3] proposed an interval-parameter robust programming method for the planning of the solid waste management, where fuzzy robust linear programming and interval-parameter programming approaches were incorporated within an optimization framework to deal with interval numbers and fuzzy membership functions. Chang et al. [15] presented a fuzzy multicriteria decision analysis combined with a geospatial analysis for identifying landfill sites in a fast growing urban region. Generally, fuzzy linear programming (FLP) was useful when a model’s stipulations (i.e. right-hand-side values) were highly uncertain but with known membership functions. However, this approach was based on an assumption that the uncertain features of the model’s constraints were dependent upon each other, such that one control variable (λ) was used for all constraints. This, however, might make some constraints not well satisfied while the others over-satisfied. Fuzzy quadratic programming (FQP) could be effective for addressing the above deficiencies of FLP, which handled uncertainties for fuzzy constraints through using n control variables (λn) corresponding to n respective constraints. For example, Tanaka and Guo [16] dealt with portfolio selection problems based on lower and upper possibility distributions and formulated them as quadratic programming models. Chen and Huang [17] developed an inexact fuzzy quadratic programming approach, through incorporating IMP and FQP within a general optimization framework to reflect uncertainties expressed as fuzzy sets and discrete intervals. Liu and Li [18] addressed a fuzzy quadratic assignment problem with penalty to minimize the total system cost through optimizing the job-allocation scheme. Li and Huang [10] advanced a fuzzy two-stage quadratic programming method to deal with dual uncertainties of fuzziness and randomness, which integrated FQP into two-stage stochastic programming (TSP) framework. However, this method could not adequately reflect the dynamic variations of system conditions (e.g., waste generation and allocation) for sequential structure of large-scale problems within a multistage context. For a MSW management system, the economic penalty subjected to uncertain waste-generation levels against pre-regulated allowable waste loads often needs to be quantified within a multistage context. Scenario-based multistage stochastic programming (MSP) is effective for responding such issues, where uncertain and dynamic information can be reflected by a multilayer scenario tree; this allows revised decisions in each time stage based on the information of sequentially realized uncertain events [19], [20] and [21]. However, in many real-world decision-making problems, uncertainties may be normally presented as both membership functions and probability distributions (e.g., vagueness in the outcomes of a random event). The conventional MSP has difficulties in reflecting such complexities. Therefore, the objective of this study is to develop a scenario-based fuzzy-stochastic quadratic programming (SFQP) method for identifying an optimal MSW management policy associated with uncertain information, where fuzzy quadratic programming (FQP) will be coupled with scenario-based multistage stochastic programming (MSP) technique. The developed SFQP can deal with hybrid uncertainties expressed as probability distributions and fuzzy sets, and can reflect the dynamics of uncertainties and decision processes under a complete set of scenarios. It can also be used for analyzing various scenarios that are associated with different levels of economic penalties when the pre-regulated policy targets are violated.

In this study, a scenario-based fuzzy-stochastic quadratic programming (SFQP) method has been developed for planning municipal solid waste (MSW) management systems under uncertainty. The developed SFQP incorporates fuzzy quadratic programming (FQP) and scenario-based multistage stochastic programming (MSP) within a general framework; this allows dual uncertainties presented as probability distributions and fuzzy sets being communicated into the optimization process. The developed SFQP method has been applied to a case study of long-term MSW management and planning. Dynamics and uncertainties of waste generation and allocation could be taken into account through a multilayer scenario tree. Moreover, various scenarios that are associated with different levels of economic penalties when the pre-regulated policy targets are violated have been analyzed. Sensitivity analysis has also been conducted to reflect the effects of varied waste-management capacities on the system cost and the satisfaction degree under SFQP and SFQP-N. The solutions obtained can be used to generate multiple decision alternatives, such that desired policies under various environmental, economic, and system-reliability conditions can eventually be identified. Comparisons of the developed SFQP with BCM, WCM and FSLP models have also been conducted. SFQP has advantages in reflecting the complexities of uncertainties presented as fuzzy sets and probabilistic distributions as well as their combinations. The results obtained from SFQP can help to identify desired waste-flow-allocation plans to make a compromise among system cost, satisfaction degree, and constraint-violation risk. Multiple membership grades (multiple λiλi levels) as adopted in SFQP can tackle the uncertainties in the model’s right-hand sides independently, such that can effectively optimize the general satisfaction of the objective and constraints. Although this study is the first attempt for identifying optimal waste management policies through the SFQP approach, the results suggest that the developed method is applicable for other environmental and resources planning problems (e.g., air quality management and water resources planning) that are associated with dynamic complexities within multistage contexts as well as uncertainties in multiple formats.