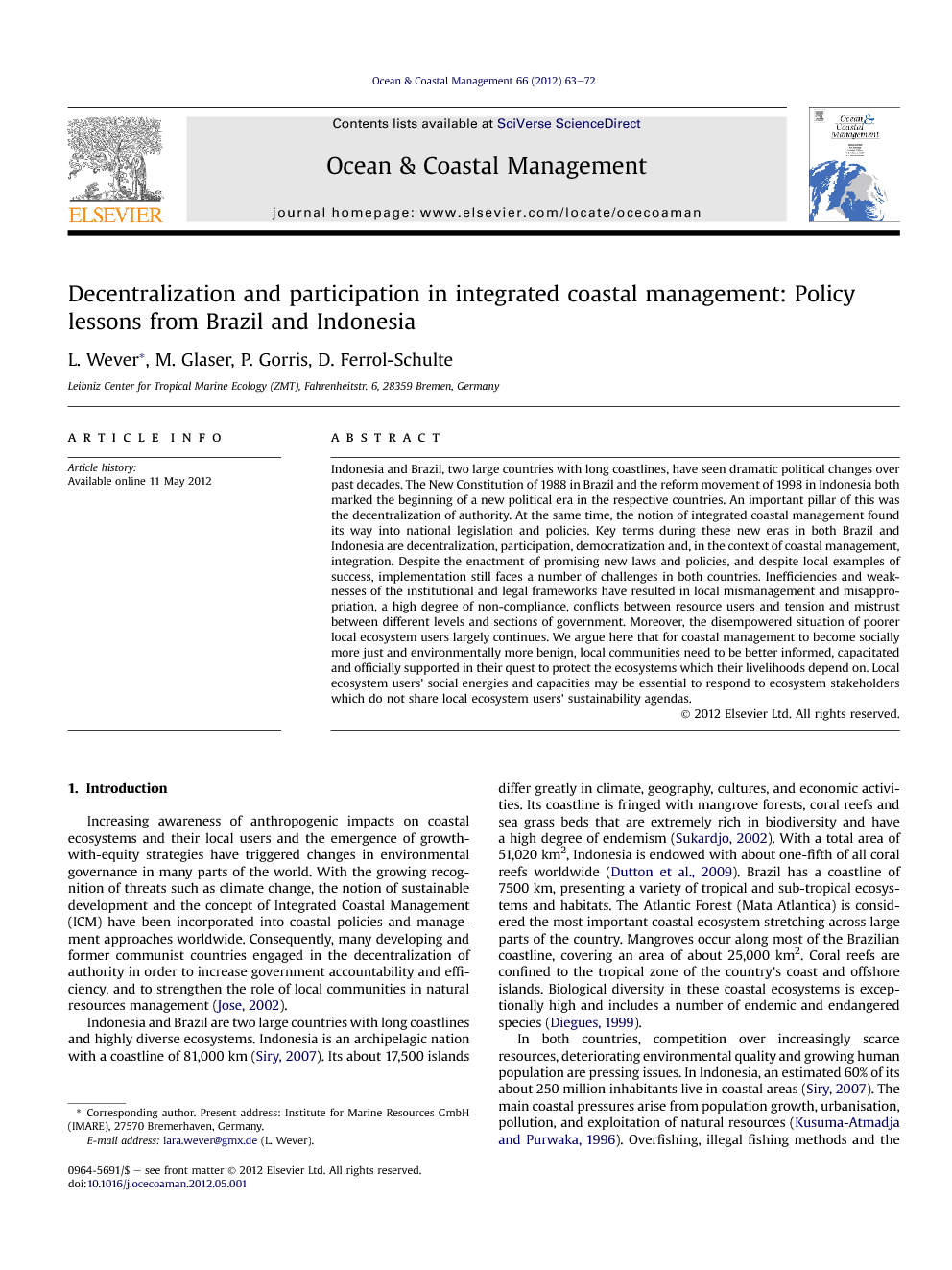 Indonesia and Brazil, two large countries with long coastlines, have seen dramatic political changes over past decades. The New Constitution of 1988 in Brazil and the reform movement of 1998 in Indonesia both marked the beginning of a new political era in the respective countries. An important pillar of this was the decentralization of authority. At the same time, the notion of integrated coastal management found its way into national legislation and policies. Key terms during these new eras in both Brazil and Indonesia are decentralization, participation, democratization and, in the context of coastal management, integration. Despite the enactment of promising new laws and policies, and despite local examples of success, implementation still faces a number of challenges in both countries. Inefficiencies and weaknesses of the institutional and legal frameworks have resulted in local mismanagement and misappropriation, a high degree of non-compliance, conflicts between resource users and tension and mistrust between different levels and sections of government. Moreover, the disempowered situation of poorer local ecosystem users largely continues. We argue here that for coastal management to become socially more just and environmentally more benign, local communities need to be better informed, capacitated and officially supported in their quest to protect the ecosystems which their livelihoods depend on. Local ecosystem users' social energies and capacities may be essential to respond to ecosystem stakeholders which do not share local ecosystem users' sustainability agendas.

Increasing awareness of anthropogenic impacts on coastal ecosystems and their local users and the emergence of growth-with-equity strategies have triggered changes in environmental governance in many parts of the world. With the growing recognition of threats such as climate change, the notion of sustainable development and the concept of Integrated Coastal Management (ICM) have been incorporated into coastal policies and management approaches worldwide. Consequently, many developing and former communist countries engaged in the decentralization of authority in order to increase government accountability and efficiency, and to strengthen the role of local communities in natural resources management (Jose, 2002). Indonesia and Brazil are two large countries with long coastlines and highly diverse ecosystems. Indonesia is an archipelagic nation with a coastline of 81,000 km (Siry, 2007). Its about 17,500 islands differ greatly in climate, geography, cultures, and economic activities. Its coastline is fringed with mangrove forests, coral reefs and sea grass beds that are extremely rich in biodiversity and have a high degree of endemism (Sukardjo, 2002). With a total area of 51,020 km2, Indonesia is endowed with about one-fifth of all coral reefs worldwide (Dutton et al., 2009). Brazil has a coastline of 7500 km, presenting a variety of tropical and sub-tropical ecosystems and habitats. The Atlantic Forest (Mata Atlantica) is considered the most important coastal ecosystem stretching across large parts of the country. Mangroves occur along most of the Brazilian coastline, covering an area of about 25,000 km2. Coral reefs are confined to the tropical zone of the country's coast and offshore islands. Biological diversity in these coastal ecosystems is exceptionally high and includes a number of endemic and endangered species (Diegues, 1999). In both countries, competition over increasingly scarce resources, deteriorating environmental quality and growing human population are pressing issues. In Indonesia, an estimated 60% of its about 250 million inhabitants live in coastal areas (Siry, 2007). The main coastal pressures arise from population growth, urbanisation, pollution, and exploitation of natural resources (Kusuma-Atmadja and Purwaka, 1996). Overfishing, illegal fishing methods and the destruction of coral reefs and mangroves are major threats to the viability of coastal ecosystems (Siry, 2007). In Brazil, around 36.5 million people, a fifth of the population, live in coastal areas (World Bank, 2006). Brazil's coastal ecosystems have suffered from severe degradation since the beginning of intensive industrial production in the 1950s. Particularly areas of high urban and industrial concentration are highly polluted and degraded (Diegues, 1999). Traditional and other marginalized populations that inhabit coastal areas in Indonesia and Brazil are particularly affected by the degradation of coastal forests or reefs since their livelihoods most critically depend on these ecosystems. These coastal communities associate a range of economic, social and cultural values with the ecosystems that surround them. Ecosystem degradation has often impoverished them and disrupted their culture (Diegues, 2002 and Diegues, 2005). Although coastal areas also receive high rates of immigration and can thus be characterised by ‘ecological illiteracy’ among migrant populations whose knowledge relates other natural environments (Krause and Glaser, 2003a and Krause and Glaser, 2003b), such non-traditional coastal ecosystem users can possess or develop relevant system knowledge and develop customary governance systems of their coastal resources (Diegues, 1999; Siry, 2006; Glaser et al., 2010a). In large and diverse countries, centralized management is associated with high levels of bureaucratisation and costs, delays in decision-making and communication problems (Siry, 2007). As a result, decentralization became a key component of the move toward democratization in Brazil and Indonesia. With a high degree of parallelity, both the New Brazilian Constitution of 1988 and the Indonesian reform movement of 1998 marked the beginnings of a new political era. The legal changes undertaken were widely associated with a transformation from autocratic rule to more democratic principles and heavily affected coastal zone management policy (see Table 1). Key terms among the official guiding principles for the policy shift in both countries were democratization, decentralization, participation, sustainability and Integrated Coastal Management (ICM).

Both countries share a number of challenges in the implementation of their legal and institutional frameworks. Despite the dominant political rhetoric of empowerment and participation of local communities in Indonesia and Brazil, a much more prominent outcome of recent coastal management policy has been the decentralization of power to local authorities. The participatory inclusion and empowerment of local ecosystem users have been impeded by a number of problems including financial restrictions, lack of capacity on a local level to handle responsibilities and conflicting priorities between stakeholders. Pre-existing hierarchical systems are thus easily reinforced, which can leave local resource users marginalised from the decision-making processes that affect them. On the other hand, decentralization has also created the scope for local participation to achieve management success in both countries. Despite their very different political and cultural contexts, promising examples of community-based and customary coastal management exist in both Indonesia and Brazil where empowered local communities have actively taken part in shaping, and implementing successful management systems which reflect local realities and priorities. Local leaders have played key roles for the success of decentralized coastal management schemes. Their values and capacities were central for the development of institutional arrangements that balance the coordination and networking requirements with the empowerment of local institutions. While this paper has reviewed some of the ‘success stories’ and implementation challenges from both countries as studied by colleagues from around the world, more research is needed to analyse in more depth success factors and identify common ground. Visser (1999) criticises that coastal management policy tools commonly focus more on formal structures such as government while neglecting informal institutions such as perceptions, values, cultural patterns of behaviour and social rules of action. Along similar lines, we argue in our analysis of Brazilian and Indonesian developments in an era of major political reform that an improved understanding of stakeholder perceptions and interests as well as of the institutional conditions and dynamics that render them incompatible is needed to improve the prospects of democratic decentralization in coastal management. User communities are motivated to protect local ecosystems against those who do not share their local sustainability agendas. For coastal management to become socially more just and environmentally more benign, local communities need to be better informed, capacitated and officially supported so that their clear quest to protect the ecosystems on which their livelihoods depend can become part of wider national and international policy agendas. This requires collaborations between authorities and local users which rely on effective information exchange, the active participation of both government and non-government stakeholders within clear democratic structures and up- and downward accountable leaders. Decision-makers involved in designing decentralization of coastal management cannot afford to overlook this. As the consequences of unfettered globalisation are becoming increasingly obvious in many regions today, these conclusions gain increased saliency.