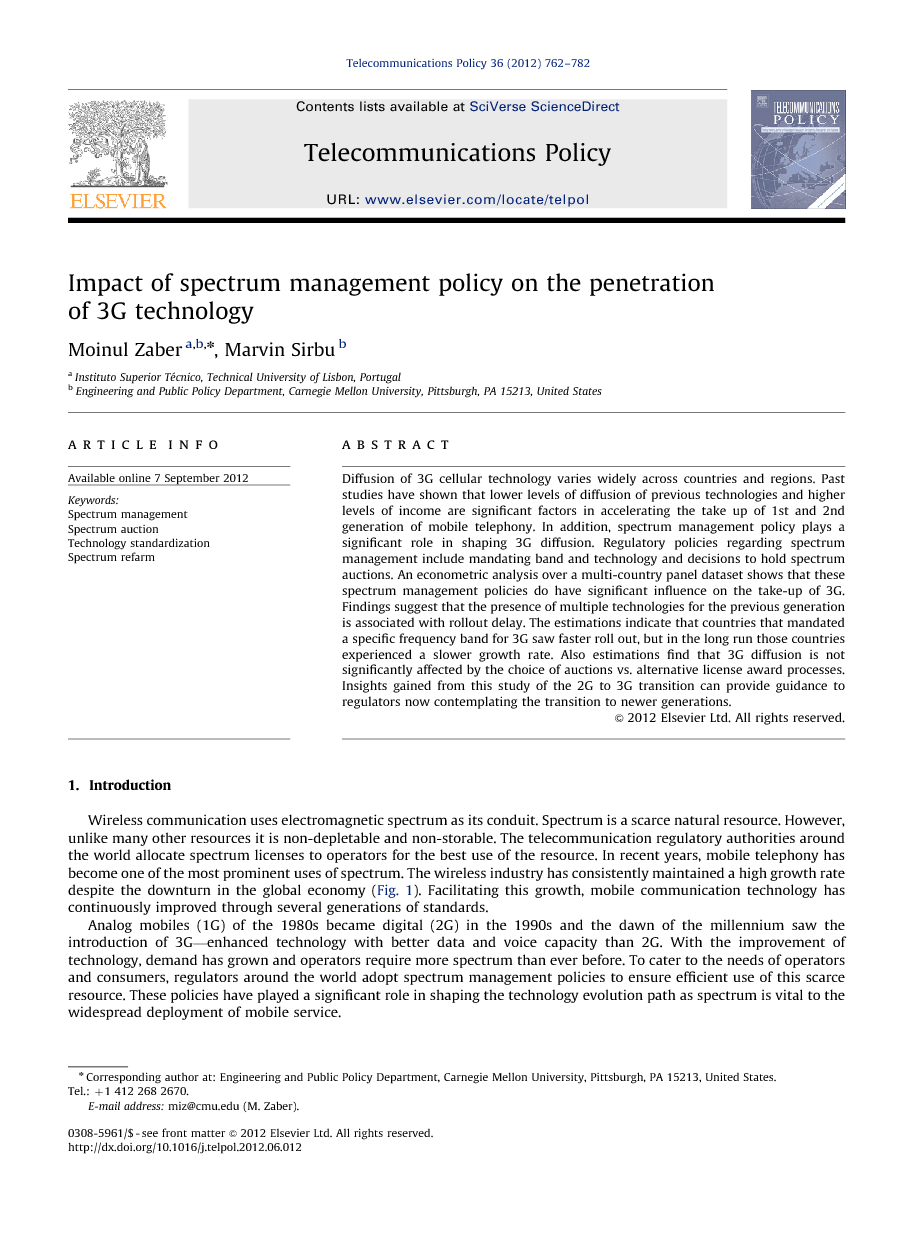 Diffusion of 3G cellular technology varies widely across countries and regions. Past studies have shown that lower levels of diffusion of previous technologies and higher levels of income are significant factors in accelerating the take up of 1st and 2nd generation of mobile telephony. In addition, spectrum management policy plays a significant role in shaping 3G diffusion. Regulatory policies regarding spectrum management include mandating band and technology and decisions to hold spectrum auctions. An econometric analysis over a multi-country panel dataset shows that these spectrum management policies do have significant influence on the take-up of 3G. Findings suggest that the presence of multiple technologies for the previous generation is associated with rollout delay. The estimations indicate that countries that mandated a specific frequency band for 3G saw faster roll out, but in the long run those countries experienced a slower growth rate. Also estimations find that 3G diffusion is not significantly affected by the choice of auctions vs. alternative license award processes. Insights gained from this study of the 2G to 3G transition can provide guidance to regulators now contemplating the transition to newer generations.

Wireless communication uses electromagnetic spectrum as its conduit. Spectrum is a scarce natural resource. However, unlike many other resources it is non-depletable and non-storable. The telecommunication regulatory authorities around the world allocate spectrum licenses to operators for the best use of the resource. In recent years, mobile telephony has become one of the most prominent uses of spectrum. The wireless industry has consistently maintained a high growth rate despite the downturn in the global economy (Fig. 1). Facilitating this growth, mobile communication technology has continuously improved through several generations of standards.Analog mobiles (1G) of the 1980s became digital (2G) in the 1990s and the dawn of the millennium saw the introduction of 3G—enhanced technology with better data and voice capacity than 2G. With the improvement of technology, demand has grown and operators require more spectrum than ever before. To cater to the needs of operators and consumers, regulators around the world adopt spectrum management policies to ensure efficient use of this scarce resource. These policies have played a significant role in shaping the technology evolution path as spectrum is vital to the widespread deployment of mobile service. This paper endeavors to examine the role of spectrum management policies on the diffusion of 3G technology. Since its inception, 3G has not been homogeneous in deployment. Some countries embraced the system earlier than others. Various authors argue that this diversity is influenced by the prior existence of a robust mobile market, and the economic characteristics of the countries (Lee et al., 2009 and Finn et al., 2010). But little has been reported about the role of spectrum management policies. A spectrum management scheme is a set of policies and procedures that enables national regulatory authorities to select which band of spectrum is to be assigned to which operator for what use. Among various regulatory decisions, the most crucial are: the choice of spectrum band, the decision regarding technology standards and the method of awarding licenses. In most cases, the regulators make available a new specific band of spectrum for the introduction of newer technology or to respond to spectrum need. This decision depends on various technical and policy oriented issues such as channel interference,1 competition, and social needs. Based on these criteria the regulators may award operators a new spectrum band or allow them to reuse their existing licensed spectrum for a new generation. The regulators mandate a specific spectrum band for a specific generation of technology to ensure global roaming, economies of scale and to avoid the problems of non-compatibility (Bohlin, Madden, & Morey, 2010). However, this decision can hinder operators from repurposing an already acquired band and may also create path dependence that can lead to an inferior technology standard that is costly to change (Cramton, 2002). The regulators allocate new spectrum using auctions or hearings, or let the operators repurpose their previously owned spectrum whenever a new generation of technology is introduced. In auctions the operators bid for spectrum lots and the highest bidder gets the license for that specific lot. In hearings, operators propose their spectrum usage plans to the regulator. After hearing the proposals the regulators award spectrum to the most attractive bid (Cramton, 2002) Repurposing does not require the operators to pay for new spectrum. Auctions, while applauded by cash-strapped governments, are criticized by operators because the resulting high prices raise operators’ costs. However, capital debt due to auctions might also act as an incentive for fast rollout.Regulatory policies directly affect the course of certain technologies in specific countries (Peha, 1998). Hence using only demographic and economic factors to explain differences in the diffusion of telecommunication technology seems incomplete. One measure of the success of regulatory policies lies in the rate of diffusion of the affected technology. Correct polices can increase the speed of diffusion whereas flawed policies can hinder growth. Therefore, this research examines the effect of regulatory policies regarding spectrum band, technology, and the award process on the diffusion of 3G around the world. This paper is structured as follows. Section 2 introduces the technology, spectrum management schemes and the hypotheses. Section 3 presents the model for analysis. Section 4 gives empirical analysis of the data and presents the main results, which is followed by the conclusions in Section 5.

This paper conducts an empirical analysis of the impact of spectrum management policies on the diffusion of 3G mobile services. The results obtained in this study bolster the idea that along side the economic and information technology characteristics of a country, the policy decisions regarding spectrum band, technology standards but not spectrum award procedure play significant roles in 3G take up. A unique time-series panel data set of the evolution of 3G from 2000–2009 across 126 countries was used to conduct the analysis. Using a logistic function for modeling the diffusion of 3G, the research show that the presence of multiple technology standards can delay the rollout of 3G. However, multiple standards are not shown to have a significant effect on the growth rate of the technology. Mandating a specific spectrum band for 3G was found to help countries enjoy rapid rollout but in the long run reduces the diffusion growth rate. An OLS specification allows us to reject the null hypothesis that the choice to use auctions has no effect on diffusion; auctions are associated with reaching the inflection point more quickly. By contrast, under RE estimation, the null hypothesis cannot be rejected. The RE estimates are consistent with viewing auctions as sunk-cost. In no case, did we find support for the notion that auctions inhibit diffusion. The study finds that country income level plays a relatively small but positive role on diffusion of 3G. Presence of 2G and fixed Internet user base leads to earlier 3G inflection. However, 3G is becoming a substitute of both of these technologies. The results also show that countries which introduce 3G later, when the technology is more mature, reach the inflection point more quickly, but have a lower peak sales rate. The insights gained from this study of the 2G to 3G transition can provide guidance to regulators now contemplating the transition from 3G to 4G. ITU accredited two technologies for 4G mobile technology, namely LTE-Advanced and WirelessMAN-Advanced (ITU-R, 2010). However, global trends show operators converging towards a single standard, LTE (LteWorld, 2012 and Maisto, 2011). Therefore the issue of regulators mandating a single technology standard is moot. ITU designated spectrum in the 700 MHz, 800 MHz, 900 MHz, 1700 MHz, 1800 MHz, 1900 MHz, 2100 MHz and 2600 MHz bands for 4G (ITU-D, 2010). In countries where 700 MHz spectrum could be freed as a result of the digital television transition, the regulators have taken steps to make this band a nationwide interoperable wireless band (FCC, 2012). In other countries, digital dividend spectrum will be in the 800 MHz band (Defraigne, 2011). Some countries have begun to license 800 MHz and 2600 MHz spectrum for LTE in line with the EU directive (Ofcom, 2011). One goal of 4G is high bit rate service, which requires wideband channels of 2×20 MHz or more (Shamasn, Faisal, & Rahman, 2008). In a single 100 MHz band there is not room for more than 2 operators each with 2×20 MHz of spectrum. Finding sufficient spectrum for multiple operators has led to fragmentation of LTE spectrum with operators worldwide rolling out service or with plans to use 700 MHz, 800 MHz, 1700 MHz, 1800 MHz, 1900 MHz, 2100 MHz, and 2600 MHz (ITU-D, 2010). Consequently, band mandates are expected to be a less common feature of 4G roll-out than for 3G. Fortunately, the cost of supporting multiple bands is dropping; the latest chip from Qualcomm (MSM-8960) supports as many as 7 different bands (Cooper, 2012). Consistent with the finding of the regression estimation, that auctions have no negative effect on rollout, it is expected that any new spectrum for 4G to be allocated primarily by auctions. 3G networks are still relatively new in many countries. Hence, only a limited number of observations per country are available, limiting the robustness of the regression estimates. With the passage of time it should be possible to verify the results over a longer observation interval. Our results also omit any impact of individual operator strategies, or regulatory measures beyond the few examined in this paper. Future research should consider the impact of a wider range of regulatory behaviors.