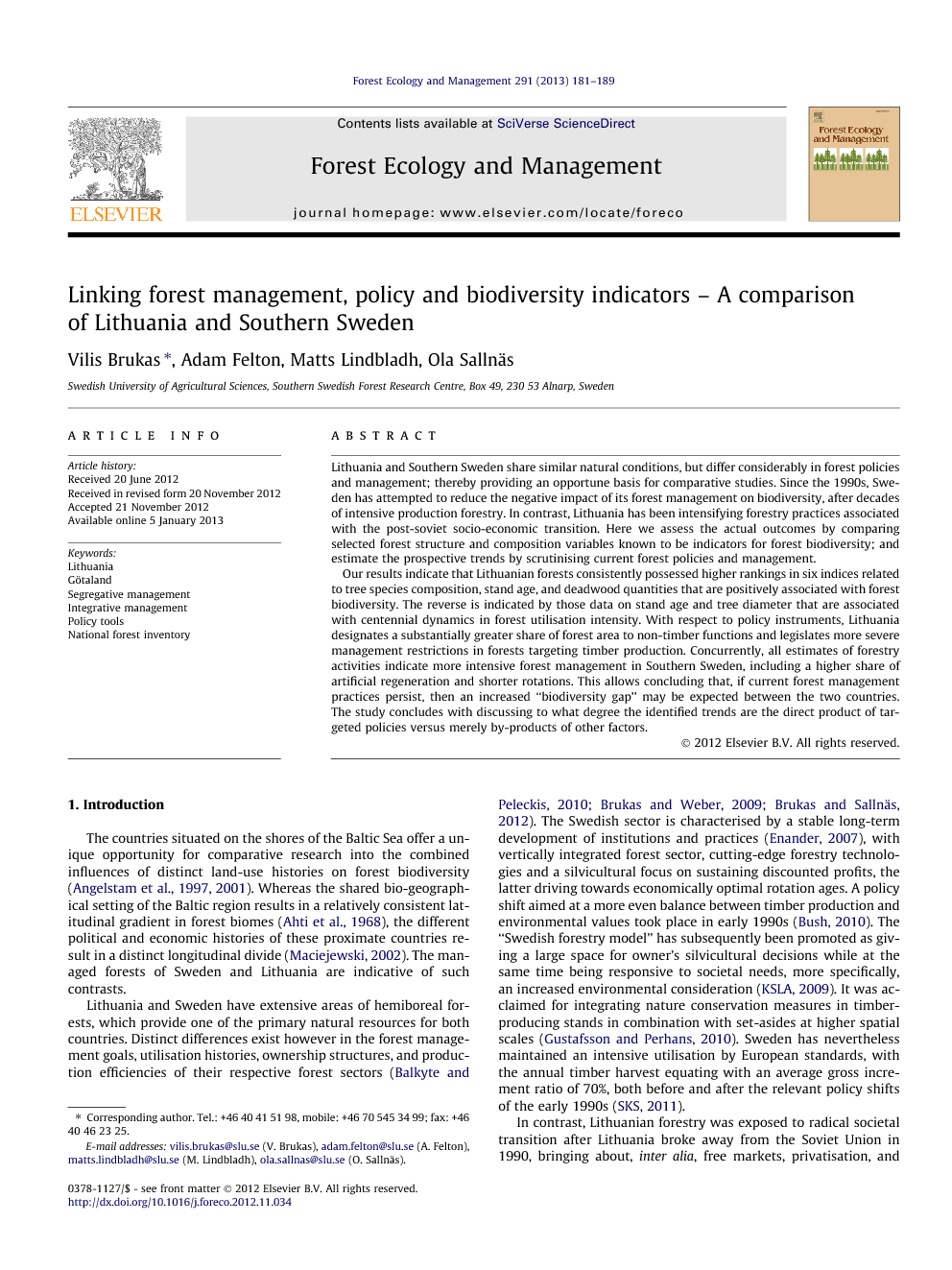 Lithuania and Southern Sweden share similar natural conditions, but differ considerably in forest policies and management; thereby providing an opportune basis for comparative studies. Since the 1990s, Sweden has attempted to reduce the negative impact of its forest management on biodiversity, after decades of intensive production forestry. In contrast, Lithuania has been intensifying forestry practices associated with the post-soviet socio-economic transition. Here we assess the actual outcomes by comparing selected forest structure and composition variables known to be indicators for forest biodiversity; and estimate the prospective trends by scrutinising current forest policies and management. Our results indicate that Lithuanian forests consistently possessed higher rankings in six indices related to tree species composition, stand age, and deadwood quantities that are positively associated with forest biodiversity. The reverse is indicated by those data on stand age and tree diameter that are associated with centennial dynamics in forest utilisation intensity. With respect to policy instruments, Lithuania designates a substantially greater share of forest area to non-timber functions and legislates more severe management restrictions in forests targeting timber production. Concurrently, all estimates of forestry activities indicate more intensive forest management in Southern Sweden, including a higher share of artificial regeneration and shorter rotations. This allows concluding that, if current forest management practices persist, then an increased “biodiversity gap” may be expected between the two countries. The study concludes with discussing to what degree the identified trends are the direct product of targeted policies versus merely by-products of other factors.

The countries situated on the shores of the Baltic Sea offer a unique opportunity for comparative research into the combined influences of distinct land-use histories on forest biodiversity (Angelstam et al., 1997 and Angelstam et al., 2001). Whereas the shared bio-geographical setting of the Baltic region results in a relatively consistent latitudinal gradient in forest biomes (Ahti et al., 1968), the different political and economic histories of these proximate countries result in a distinct longitudinal divide (Maciejewski, 2002). The managed forests of Sweden and Lithuania are indicative of such contrasts. Lithuania and Sweden have extensive areas of hemiboreal forests, which provide one of the primary natural resources for both countries. Distinct differences exist however in the forest management goals, utilisation histories, ownership structures, and production efficiencies of their respective forest sectors (Balkyte and Peleckis, 2010, Brukas and Weber, 2009 and Brukas and Sallnäs, 2012). The Swedish sector is characterised by a stable long-term development of institutions and practices (Enander, 2007), with vertically integrated forest sector, cutting-edge forestry technologies and a silvicultural focus on sustaining discounted profits, the latter driving towards economically optimal rotation ages. A policy shift aimed at a more even balance between timber production and environmental values took place in early 1990s (Bush, 2010). The “Swedish forestry model” has subsequently been promoted as giving a large space for owner’s silvicultural decisions while at the same time being responsive to societal needs, more specifically, an increased environmental consideration (KSLA, 2009). It was acclaimed for integrating nature conservation measures in timber-producing stands in combination with set-asides at higher spatial scales (Gustafsson and Perhans, 2010). Sweden has nevertheless maintained an intensive utilisation by European standards, with the annual timber harvest equating with an average gross increment ratio of 70%, both before and after the relevant policy shifts of the early 1990s (SKS, 2011). In contrast, Lithuanian forestry was exposed to radical societal transition after Lithuania broke away from the Soviet Union in 1990, bringing about, inter alia, free markets, privatisation, and institutional reforms ( Lazdinis et al., 2009). Lithuanian forests are still to a large extent managed without consideration of interest rates, instead maximising volume production of valuable timber assortments ( Brukas and Weber, 2009). However, the introduction of free markets, along with other factors, led to a doubling in utilisation intensity ( Brukas and Kairiūkštis, 2003 and Brukas et al., 2009). Disregarding forests reserved for the restitution of the private property, the annual harvesting/increment ratio has over the last decade approached Swedish levels, and averaged approximately 65% in 1997–2007 ( Brukas et al., 2011). It has long been recognized that the lower management intensity found in many of the countries previously under the centralized control of the Soviet Union, helped to contribute to the retention of higher forest biodiversity values relative to their West European counterparts (Angelstam et al., 1997). For example, there is a clear positive geographical gradient from the west to east in Europe in amount of pristine forest remaining (Angelstam et al., 2001). With the fall of the Soviet Union in 1990, several authors have raised concerns that the shift to a market–economy criteria of maximising their forest’s net present value could dramatically alter Lithuania’s forest landscape, with associated negative impacts on forest dependent taxa (Angelstam et al., 1997, Hjortso and Straede, 2001 and Kurlavicius et al., 2004). This concern has been revitalized in Lithuania in recent years, because of calls for privatisation of Lithuania’s state forests, and a general push for increased competitiveness and efficiency of the forest sector (Balkyte and Peleckis, 2010). Has the Swedish forest policy shift towards “greening” led to more environmentally sensitive forestry practices and better environmental outcomes compared to Lithuania that has intensified its forestry during the socio-economic transition? The study aims to answer this question by comparing the current forest state, policy instruments and actual forest management practices. Most research to date either examines forest biodiversity per se (occasionally linking it to forest management practices); or conducts policy analyses detached from the actual forest management. In this multidisciplinary study we attempt to overlay these different facets to enable a comprehensive comparison. The paper concludes by discussing to what degree forest management impacts on biodiversity are a consequence of targeted policies for environmental conservation.