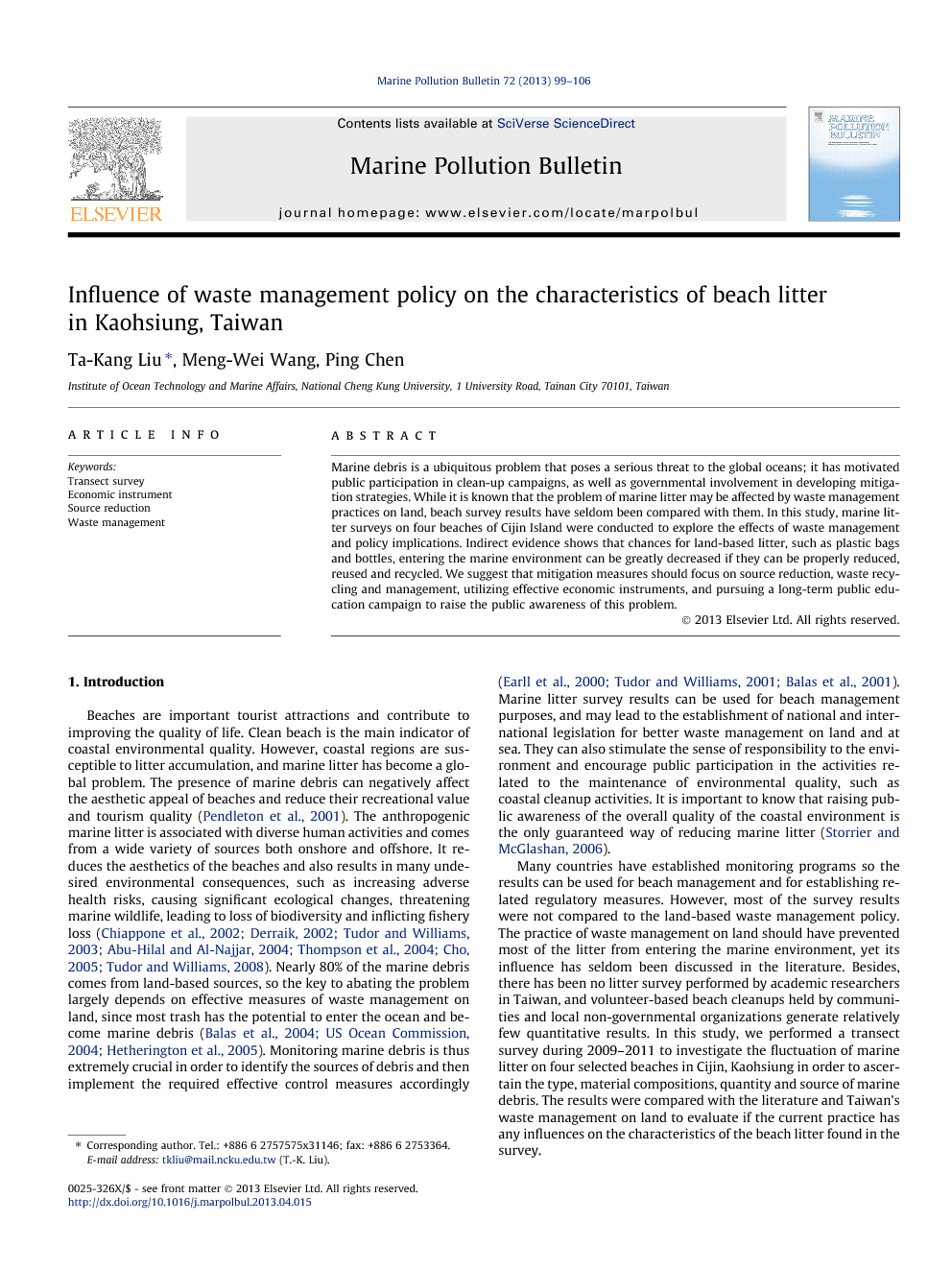 Marine debris is a ubiquitous problem that poses a serious threat to the global oceans; it has motivated public participation in clean-up campaigns, as well as governmental involvement in developing mitigation strategies. While it is known that the problem of marine litter may be affected by waste management practices on land, beach survey results have seldom been compared with them. In this study, marine litter surveys on four beaches of Cijin Island were conducted to explore the effects of waste management and policy implications. Indirect evidence shows that chances for land-based litter, such as plastic bags and bottles, entering the marine environment can be greatly decreased if they can be properly reduced, reused and recycled. We suggest that mitigation measures should focus on source reduction, waste recycling and management, utilizing effective economic instruments, and pursuing a long-term public education campaign to raise the public awareness of this problem.

Beaches are important tourist attractions and contribute to improving the quality of life. Clean beach is the main indicator of coastal environmental quality. However, coastal regions are susceptible to litter accumulation, and marine litter has become a global problem. The presence of marine debris can negatively affect the aesthetic appeal of beaches and reduce their recreational value and tourism quality (Pendleton et al., 2001). The anthropogenic marine litter is associated with diverse human activities and comes from a wide variety of sources both onshore and offshore. It reduces the aesthetics of the beaches and also results in many undesired environmental consequences, such as increasing adverse health risks, causing significant ecological changes, threatening marine wildlife, leading to loss of biodiversity and inflicting fishery loss (Chiappone et al., 2002, Derraik, 2002, Tudor and Williams, 2003, Abu-Hilal and Al-Najjar, 2004, Thompson et al., 2004, Cho, 2005 and Tudor and Williams, 2008). Nearly 80% of the marine debris comes from land-based sources, so the key to abating the problem largely depends on effective measures of waste management on land, since most trash has the potential to enter the ocean and become marine debris (Balas et al., 2004, US Ocean Commission, 2004 and Hetherington et al., 2005). Monitoring marine debris is thus extremely crucial in order to identify the sources of debris and then implement the required effective control measures accordingly (Earll et al., 2000, Tudor and Williams, 2001 and Balas et al., 2001). Marine litter survey results can be used for beach management purposes, and may lead to the establishment of national and international legislation for better waste management on land and at sea. They can also stimulate the sense of responsibility to the environment and encourage public participation in the activities related to the maintenance of environmental quality, such as coastal cleanup activities. It is important to know that raising public awareness of the overall quality of the coastal environment is the only guaranteed way of reducing marine litter (Storrier and McGlashan, 2006). Many countries have established monitoring programs so the results can be used for beach management and for establishing related regulatory measures. However, most of the survey results were not compared to the land-based waste management policy. The practice of waste management on land should have prevented most of the litter from entering the marine environment, yet its influence has seldom been discussed in the literature. Besides, there has been no litter survey performed by academic researchers in Taiwan, and volunteer-based beach cleanups held by communities and local non-governmental organizations generate relatively few quantitative results. In this study, we performed a transect survey during 2009–2011 to investigate the fluctuation of marine litter on four selected beaches in Cijin, Kaohsiung in order to ascertain the type, material compositions, quantity and source of marine debris. The results were compared with the literature and Taiwan’s waste management on land to evaluate if the current practice has any influences on the characteristics of the beach litter found in the survey

In this study, it can be seen that the marine debris survey in Cijin Island is significantly different from NMDMP in terms of the collected items and its distribution pattern, which can be attributed to differences in coastal activities, cultural style, habits in waste handing, and policy of waste management on land. By comparing foreign management experiences and litter characteristics, we conclude with some management implication and strategy for alleviating the marine litter problem. Although marine debris is a global issue, its adverse effects typically cause impacts at the local level and require local involvement. Greater involvement with local governments and partnerships with communities and industry will also help to reduce marine debris. It should be noted that the cleanup activities cannot eliminate marine litter. Mitigation measures should focus on source reduction, wastes recycling and management, and the pursuit of a long-term commitment to public education and outreach to raise the public awareness of this problem. Finally, the adverse impacts associated with marine debris warrant the time, monitoring, research and resources it may take to alleviate this form of marine pollution.