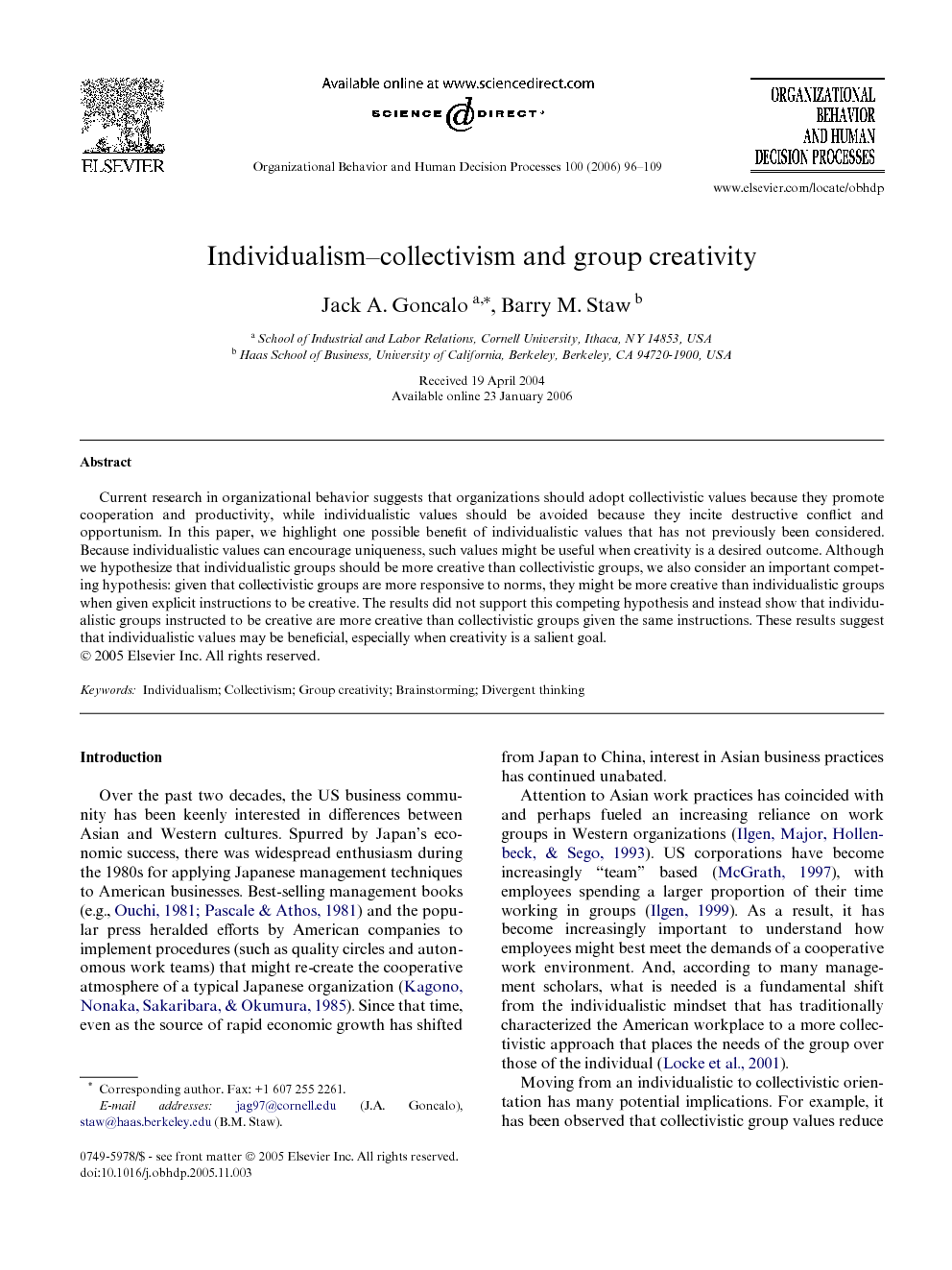 Over the past two decades, the US business community has been keenly interested in differences between Asian and Western cultures. Spurred by Japan’s economic success, there was widespread enthusiasm during the 1980s for applying Japanese management techniques to American businesses. Best-selling management books (e.g., Ouchi, 1981 and Pascale and Athos, 1981) and the popular press heralded efforts by American companies to implement procedures (such as quality circles and autonomous work teams) that might re-create the cooperative atmosphere of a typical Japanese organization (Kagono, Nonaka, Sakaribara, & Okumura, 1985). Since that time, even as the source of rapid economic growth has shifted from Japan to China, interest in Asian business practices has continued unabated. Attention to Asian work practices has coincided with and perhaps fueled an increasing reliance on work groups in Western organizations (Ilgen, Major, Hollenbeck, & Sego, 1993). US corporations have become increasingly “team” based (McGrath, 1997), with employees spending a larger proportion of their time working in groups (Ilgen, 1999). As a result, it has become increasingly important to understand how employees might best meet the demands of a cooperative work environment. And, according to many management scholars, what is needed is a fundamental shift from the individualistic mindset that has traditionally characterized the American workplace to a more collectivistic approach that places the needs of the group over those of the individual (Locke et al., 2001). Moving from an individualistic to collectivistic orientation has many potential implications. For example, it has been observed that collectivistic group values reduce social loafing and increase cooperation (Wagner, 1995), and that people in collectivistic organizational cultures will identify more strongly with their work groups (Chatman, Polzer, Barsade, & Neale, 1998). However, there may also be some downside risks associated with a shift toward collectivism. Although collectivistic values may promote feelings of harmony and cooperation, they may also extinguish the creative spark necessary for innovation. Given the widely recognized importance of creativity for sustaining competitive advantage, such a byproduct of collectivism might have considerable negative consequences (Kanter, 1988). To explore this possibility, we present an experiment designed to show how an individualistic vs. collectivistic orientation can influence the creativity of people working on a group task. This paper proceeds as follows. First, we describe the basic elements of individualism and collectivism by describing how people in these contrasting cultures view themselves in relation to others. Second, we link individualism and collectivism to creativity and argue that individualism is preferable when creativity is the desired outcome. Third, we consider an important counter-argument to our basic position. We explore whether people in collectivistic cultures may also be creative if they are instructed to arrive at creative solutions (Flynn & Chatman, 2001). Finally, we test these alternative hypotheses in a laboratory experiment on group creativity.

We began by noting an apparent shift away from individualistic values in work organizations to those reflecting a more collectivistic culture. Although many scholars have argued for the utility of such a shift, there has been relatively little study of its unintended or possible negative consequences. Our results suggest that collectivistic values may extinguish the spark necessary for creativity in groups. We also found that barriers to creativity in collectivistic groups cannot easily be surmounted by simple demands for creativity. Therefore, while individualistic groups may at times appear to be divisive and even unruly, such a cultural orientation may actually help groups meet the requirements of innovation in the workplace.