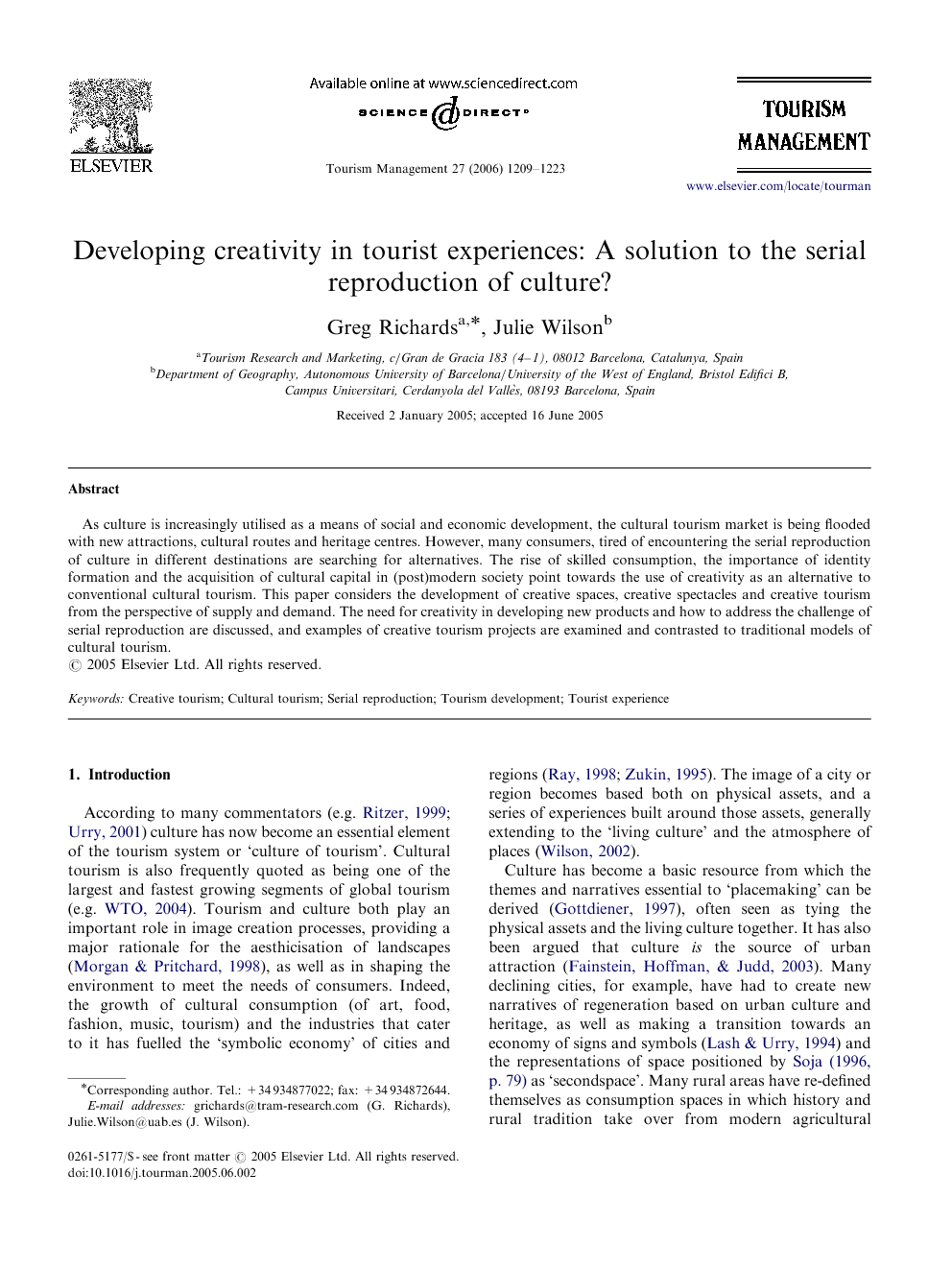 As culture is increasingly utilised as a means of social and economic development, the cultural tourism market is being flooded with new attractions, cultural routes and heritage centres. However, many consumers, tired of encountering the serial reproduction of culture in different destinations are searching for alternatives. The rise of skilled consumption, the importance of identity formation and the acquisition of cultural capital in (post)modern society point towards the use of creativity as an alternative to conventional cultural tourism. This paper considers the development of creative spaces, creative spectacles and creative tourism from the perspective of supply and demand. The need for creativity in developing new products and how to address the challenge of serial reproduction are discussed, and examples of creative tourism projects are examined and contrasted to traditional models of cultural tourism.

According to many commentators (e.g. Ritzer, 1999; Urry, 2001) culture has now become an essential element of the tourism system or ‘culture of tourism’. Cultural tourism is also frequently quoted as being one of the largest and fastest growing segments of global tourism (e.g. WTO, 2004). Tourism and culture both play an important role in image creation processes, providing a major rationale for the aesthicisation of landscapes (Morgan & Pritchard, 1998), as well as in shaping the environment to meet the needs of consumers. Indeed, the growth of cultural consumption (of art, food, fashion, music, tourism) and the industries that cater to it has fuelled the ‘symbolic economy’ of cities and regions (Ray, 1998; Zukin, 1995). The image of a city or region becomes based both on physical assets, and a series of experiences built around those assets, generally extending to the ‘living culture’ and the atmosphere of places (Wilson, 2002). Culture has become a basic resource from which the themes and narratives essential to ‘placemaking’ can be derived (Gottdiener, 1997), often seen as tying the physical assets and the living culture together. It has also been argued that culture is the source of urban attraction (Fainstein, Hoffman, & Judd, 2003). Many declining cities, for example, have had to create new narratives of regeneration based on urban culture and heritage, as well as making a transition towards an economy of signs and symbols (Lash & Urry, 1994) and the representations of space positioned by Soja (1996, p. 79) as ‘secondspace’. Many rural areas have re-defined themselves as consumption spaces in which history and rural tradition take over from modern agricultural production as the key elements of identification (Cloke, 1993). However, as more cities and regions compete in (re)producing and promoting themselves for tourism and culture employing the same formulaic mechanisms, their ability to create ‘uniqueness’ arguably diminishes, often assumed to lead towards the ‘serial reproduction’ of culture (Harvey, 1989), ‘placelessness’ (Relph, 1976), non-places (Augé, 1995) or McDonaldisation (Ritzer & Liska, 1997). Similarly, Rojek, (1995) observes the growth of ‘universal cultural space’ that ‘provides the same aesthetic and spatial references wherever one is in the world’ (1995, p. 146). Ironically, the strategies adopted by cities to avoid such serial reproduction and create a ‘distinctive’ image are also converging. In a study of the use of culture in the image-creation of Dutch local Authorities, Cachet, Kroes Willems, and Richards (2003) found that a large number of cities fell back on stereotypical pictorial images, and that many had even adopted the same promotional slogans. Zukin argues that ‘so-called “cultural cities” each claim distinctiveness but reproduce the same facilities in any number of places, echoing industrial globalisation with its geographically widespread production but concentrated consumption’ (2004, p. 8). This is especially evident in the case of the Guggenheim Museum, where the attempt by Bilbao to establish cultural distinction by ‘buying’ a Guggenheim museum has already been undermined by the recent proliferation of Guggenheims across the world. New Guggenheims have opened in Las Vegas and Berlin, with others under discussion in Salzburg, Rio de Janeiro, Tokyo and Edinburgh. The waiting list of cities for a Guggenheim ‘kit’ has now reached 60 (Richards, 2000), so perhaps ‘McGuggenheim’ (Honigsbaum, 2001; Ibelings, 2001) is now a more appropriate label for this ‘museum chain’? This paper examines some of the consequences of increasing serial reproduction of culture for tourism, and suggests that the reorientation of current models of ‘cultural tourism’ towards new modes of creativity-led tourism may represent one response to this problem.

Processes of globalisation and symbolic competition seem to be leading to increasing serial reproduction of cultural attractions and ‘commodification’ of the cultural tourism product. Cities and regions are seeking solutions to this problem in a variety of strategies which seek to add value, diversify and animate the tourist and cultural product. The dilemma for cultural tourism development, however, is that such diversification strategies themselves tend to converge and become subject to serial reproduction. The process by which cultural innovation is overtaken and subverted by borrowing and copying reflects the process of ‘commodification’ described by Pine and Gilmore (1999) in the service economy. Tourism services provide good examples of the commodification process, where the availability of similar offerings leads to customers buying only on price. This has been the experience of many ‘sun and sand’ destinations in recent decades. We have argued that one way of avoiding commodification and serial reproduction is through the application of creativity. As creativity essentially involves adding something new to existing cultural products, it is an essential source of innovation. In the tourism sector, however, much innovation is based on product innovation, which is either accepted or rejected by the consumer. Very rarely is the consumer actually involved in the creative process itself. In the concept of creative tourism, therefore, the most important implication for managers is that creativity should be an attribute of the production process as well as the consumption process. By dint of being developed endogenously, creative tourism does more than add a creative element to the destination product. It has to involve the creative use of destination assets (inherited, created and creative assets) to provide creative experiences for tourists. This implies that there should be a specific reason why tourists should engage in specific creative activities in your particular destination. This requires more creativity from destination managers than simply staging yoga courses or opening generic cookery schools. Tourists also need to be seen as more than simple consumers of experiences. Creative tourists are engaging in a process of self-development which should lead onto the next stage of value creation—that of ‘transformations’ (Pine & Gilmore, 1999). Creative tourism also arguably has the potential to tackle other issues of tourism management. For example, the development of creative experiences can imply a more direct interaction between tourists and the local population. Creative tourism can also transform this relationship, turning the local into the essential source of expertise that the tourist is seeking, reversing the usual power relationships of the host–guest encounter. Creative tourism also has the potential to address problems of managing authenticity in cultural tourism. In creative experiences, ‘authenticity’ is not dependent on external referents or the direct context of the experience, but on the transformational potential of the experiences themselves and the imagination and skill of the tourists. In order to harness the benefits of creative tourism, managers will need to engage more actively with the creative process, not just in terms of product innovation, but also in recognising the creative potential of tourists. The development of creative tourism should also be underpinned by a closer relationship between the tourism and cultural sectors, which until now have often been at odds with one another. Cultural managers often have essential creative skills which can be used to innovate the tourism experience, while tourism managers can bring the economic and marketing skills that are essential to make the product viable. Finally, we emphasise that this paper serves to contribute to the debate on the role of creativity in tourism practice and process. It is not the intention to present creative tourism as a panacea or a diametrically opposed alternative to traditional cultural tourism. Instead, the notions of creativity in tourism and (by extension) creative tourism should be viewed as one potential option among many others for destinations seeking to avoid problems of serial reproduction of culture.