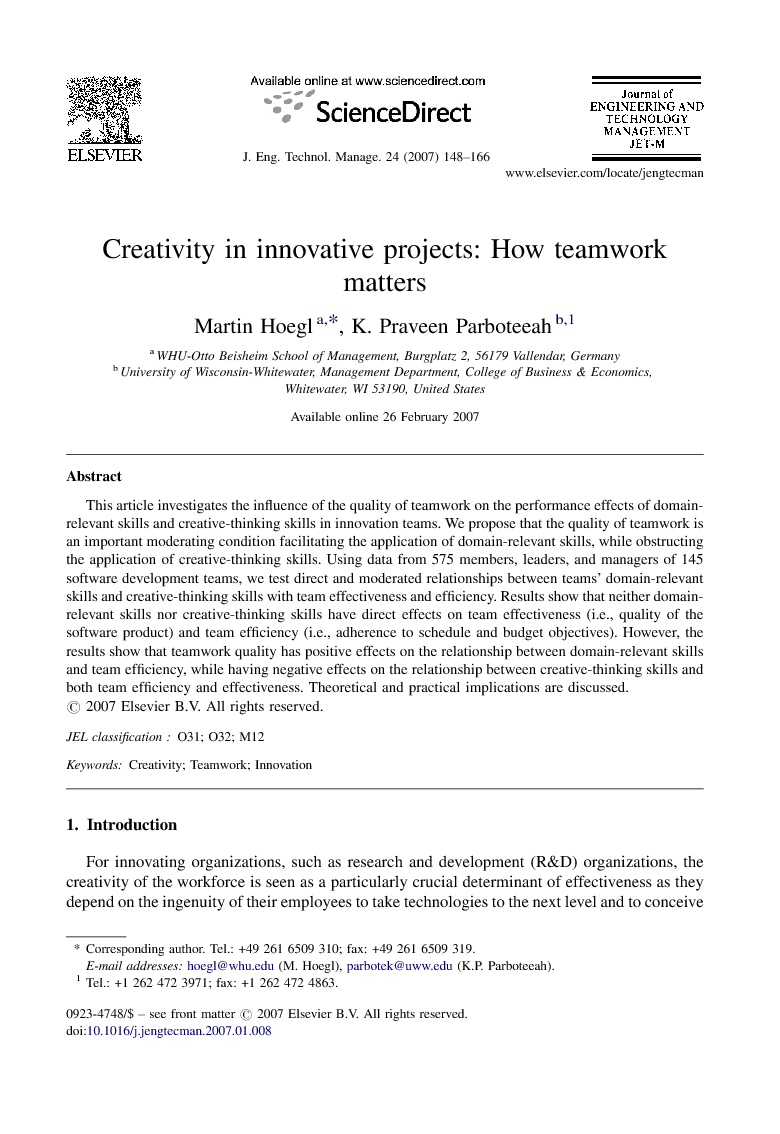 For innovating organizations, such as research and development (R&D) organizations, the creativity of the workforce is seen as a particularly crucial determinant of effectiveness as they depend on the ingenuity of their employees to take technologies to the next level and to conceive products that are radically different and valuable to create competitive advantage (Van de Ven, 1986, Hurley, 1995, Amabile, 1996, Oldham and Cummings, 1996, Madhavan and Grover, 1998 and Lovelace et al., 2001). One way in which organizations are combining the creativity of their employees while ensuring operational efficiency is through teams (Cohen, 1994, Kichuk and Wiesner, 1997 and Hoegl and Gemuenden, 2001). In such teams, individuals interact directly to integrate their diverse knowledge and skills (Mohrman et al., 1995, Taggar, 2002 and Tesluk et al., 1997). However, despite the importance of teams to innovative tasks and the increased attention devoted to understanding creativity (Woodman et al., 1993, Amabile, 1996, Ford, 1996 and Taggar, 2002), there is still a relative dearth of studies investigating team-level factors influencing the application of the creative potential in teams and its effects on performance dimensions of innovative projects such as product quality as well as development budget and time (Leenders et al., 2003). Past research shows that there has been strong interest in individual-level creativity (MacKinnon, 1965 and Madjar et al., 2002). However, a number of scholars have expanded the scope of theorizing beyond the individual to comprise multiple levels (e.g., Amabile, 1996, Ford, 1996 and Drazin et al., 1999), including team-level creativity (Taggar, 2002) and organization-level creativity (Woodman et al., 1993). Furthermore, most of the research on group creativity has primarily involved comparisons between groups and ‘nongroups’ (Paulus, 2000) investigated in laboratory studies. While such prior contributions recognize the potential influence of team processes, there is a lack of studies that provide conceptual explanations and empirical validation of how team processes affect the application of individuals’ creative potential on projects that generally require creativity (e.g., innovative projects such as software development). Focusing on the team level of analysis, we investigate how team collaborative processes influence the relationship of creativity-relevant skills with team performance. Following Amabile's (1996) conceptualization, we distinguish between domain-relevant skills – abilities regarding a specific content domain, and creative-thinking skills – divergent thinking and association abilities. We propose that team collaboration, i.e., the interactive work mode of teams also referred to as teamwork (Hoegl and Gemuenden, 2001), has different effects in that high levels of team collaboration facilitate the application of domain-relevant skills while impeding the application of creative-thinking skills. The main thrust of our argument regarding domain-relevant skills is that teams need to have high levels of collaboration to synergistically combine their diverse skills on the common team task (Okhuysen and Eisenhardt, 2002 and Thompson, 2003) in order to successfully cope with the complex, novel, uncertain, and dynamic nature of innovative projects (Gladstein, 1984 and Stewart and Barrick, 2000). In contrast, we propose that collaborative processes reduce the performance effect of teams’ creative-thinking skills. This argument is based chiefly on the grounds that creativity as a process (Drazin et al., 1999) involves divergent thinking (Amabile, 1996, Paulus, 2000 and Thompson, 2003), or the generation of a wide variety of ideas or responses to a particular problem. The collaboration within teams, however, is likely to result in strong convergent forces, limiting the application of creative-thinking skills and their influence on team performance in innovative projects. Given the above-described state of the literature, this study addresses a significant gap. Past research has generated understanding of the processes behind how multiple levels can contribute to ‘creativity’. In such studies, creativity has been typically conceptualized as an outcome, such as the novelty or inventiveness of a problem solution achieved, often referred to as the ‘creative product’ (Woodman et al., 1993, Ford, 1996, Drazin et al., 1999 and Taggar, 2002). However, little is known about how the creative potential of teams (as an “input” in terms of input-process-output models of team effectiveness; Gladstein, 1984 and Hackman, 1987) affects different aspects of the task performance of teams with innovative projects, such as the quality of the product developed as well as adherence to schedule and budget objectives. As such, we investigate how two different types of creativity-relevant skills, namely domain-relevant skills and creative-thinking skills (Amabile, 1996), are linked to different dimensions of team performance in light of the team collaborative process (Hoegl and Gemuenden, 2001). We thus go beyond prior conceptual contributions or laboratory studies investigating individual creative action (Ford, 1996) or group creativity (Taggar, 2002). We detail our arguments regarding creativity-relevant skills by considering the broad conceptualization of team collaboration offered by Hoegl and Gemuenden (2001), who specify six team process variables, i.e., communication, coordination, balance of member contributions, mutual support, effort, and cohesion, as facets of the quality of teamwork. As such, we argue that teamwork quality moderates the relationships of domain-relevant skills and creative-thinking skills with team performance. Fig. 1 depicts the conceptual framework. This research thus extends previous analyses (Hoegl and Gemuenden, 2001 and Hoegl et al., 2003) relating teamwork quality directly to team performance. Drawing on data from the same study, we investigate teamwork quality as a moderator variable, influencing the relationship between teams’ creativity relevant skills and team performance.