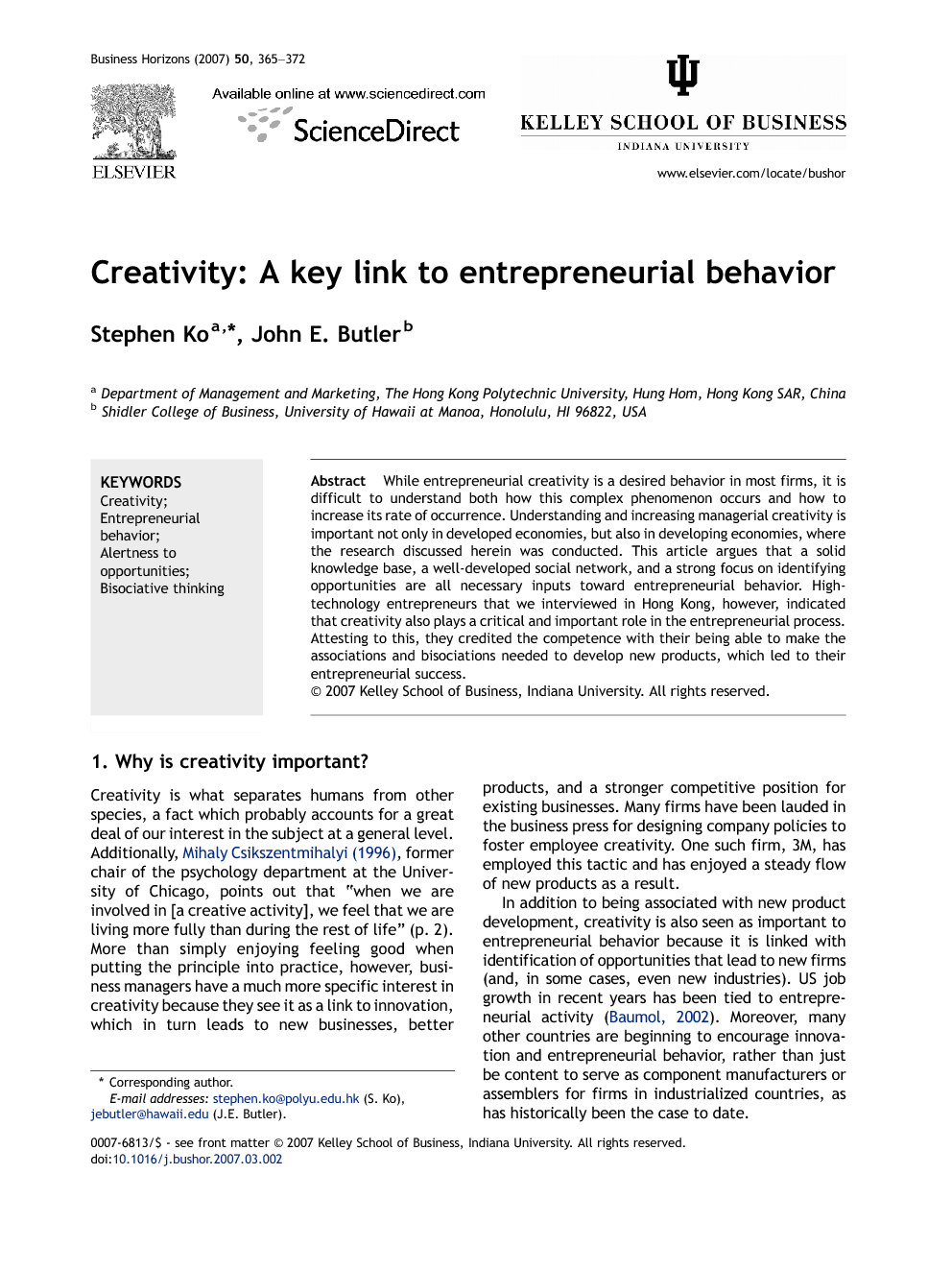 While entrepreneurial creativity is a desired behavior in most firms, it is difficult to understand both how this complex phenomenon occurs and how to increase its rate of occurrence. Understanding and increasing managerial creativity is important not only in developed economies, but also in developing economies, where the research discussed herein was conducted. This article argues that a solid knowledge base, a well-developed social network, and a strong focus on identifying opportunities are all necessary inputs toward entrepreneurial behavior. High-technology entrepreneurs that we interviewed in Hong Kong, however, indicated that creativity also plays a critical and important role in the entrepreneurial process. Attesting to this, they credited the competence with their being able to make the associations and bisociations needed to develop new products, which led to their entrepreneurial success.

Creativity is what separates humans from other species, a fact which probably accounts for a great deal of our interest in the subject at a general level. Additionally, Mihaly Csikszentmihalyi (1996), former chair of the psychology department at the University of Chicago, points out that “when we are involved in [a creative activity], we feel that we are living more fully than during the rest of life” (p. 2). More than simply enjoying feeling good when putting the principle into practice, however, business managers have a much more specific interest in creativity because they see it as a link to innovation, which in turn leads to new businesses, better products, and a stronger competitive position for existing businesses. Many firms have been lauded in the business press for designing company policies to foster employee creativity. One such firm, 3M, has employed this tactic and has enjoyed a steady flow of new products as a result. In addition to being associated with new product development, creativity is also seen as important to entrepreneurial behavior because it is linked with identification of opportunities that lead to new firms (and, in some cases, even new industries). US job growth in recent years has been tied to entrepreneurial activity (Baumol, 2002). Moreover, many other countries are beginning to encourage innovation and entrepreneurial behavior, rather than just be content to serve as component manufacturers or assemblers for firms in industrialized countries, as has historically been the case to date. While many scholars (e.g., Ward, 2004) acknowledge that creativity is an essential aspect of entrepreneurship and most managers encourage creativity, very little is known about how the process works, especially with respect to recognizing entrepreneurial opportunities. As firms in less developed and newly developing economies attempt to move from product imitation toward product development and innovation, creativity is likely to become an increasingly important maintenance key to those who already hold a competitive advantage. Such developmental momentum is being displayed by China and Hong Kong, both of which are investing increasingly in invention and product development, and from where we draw many of our conclusions about the role of creativity. Tony Yu (2004) characterized Hong Kong's managers as “guerilla entrepreneurs” because they “are largely involved in ordinary discoveries, attempting to fill the gaps brought about by the extraordinary discoveries from industrialized economies” (p. 171). Our research in the region indicates that this is changing, in part because both managers and entrepreneurs are being more creative regarding the products they develop and the businesses they start. As entrepreneurs in developing economies transition from being engaged exclusively in “ordinary discoveries” to higher involvement in “extraordinary discoveries,” firms in countries with developed economies will have to become more creative if they want to maintain their competitive edge. There are also side benefits associated with countries developing their high-technology sectors because these types of firms have spillover effects which often increase the productivity of other companies that purchase their products, technologies, or services. Because governments see high-technology firms as a buffer to economic downturns, as well as critical to future economic growth, they have uniformly been very supportive of this sector. High-technology firms are faced with the difficult task of continuously identifying entrepreneurial opportunities, and must do so to remain competitive (Zaheer & Zaheer, 1997). To complicate matters, they must perform this feat in a highly uncertain environment, in which they are never likely to have all the information they desire (West & Meyer, 1997). Sternberg (2004) suggests the amount of relevant knowledge individuals have at their disposal is one of the most important links to creativity. Interestingly, our research revealed that the way in which managers link apparently unrelated bits of information is also extremely important to creativity. Specifically, we found that Chinese managers obtained information from individuals in their social networks, built on knowledge gained through past work experiences, read published information sources, and were creative to the degree that they could link disconnected pieces of information from these different sources in ways that led to new products or businesses (Ko & Butler, 2006). If, indeed, part of the creative process involves linking formally unassociated bits of information into new combinations, this knowledge can serve as a potentially useful avenue for training entrepreneurs and students to be more creative in ways that make entrepreneurial behavior more likely.