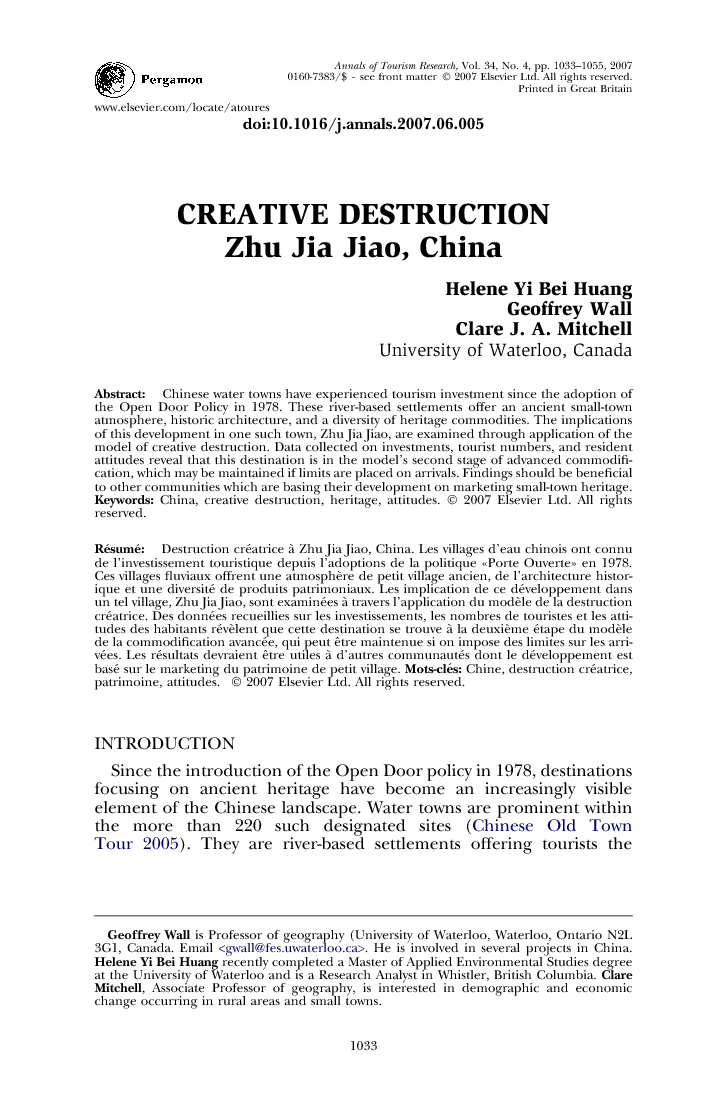 Chinese water towns have experienced tourism investment since the adoption of the Open Door Policy in 1978. These river-based settlements offer an ancient small-town atmosphere, historic architecture, and a diversity of heritage commodities. The implications of this development in one such town, Zhu Jia Jiao, are examined through application of the model of creative destruction. Data collected on investments, tourist numbers, and resident attitudes reveal that this destination is in the model’s second stage of advanced commodification, which may be maintained if limits are placed on arrivals. Findings should be beneficial to other communities which are basing their development on marketing small-town heritage.

Since the introduction of the Open Door policy in 1978, destinations focusing on ancient heritage have become an increasingly visible element of the Chinese landscape. Water towns are prominent within the more than 220 such designated sites (Chinese Old Town Tour 2005). They are river-based settlements offering tourists the opportunity to become immersed in a heritage setting, replete with historic architecture and small-town ambience. Their emergence as destinations for both domestic and foreign tourists has been driven by a surge in both public and, to a lesser extent, private investment. Like all destinations, however, it is becoming increasingly evident that the financial gains spawned by such investments have not come without costs. These externalities are the primary focus of this paper. The fundamental purpose of this study is to examine the relationship between tourism investment and the quality of life of residents living within the Chinese water town, Zhu Jia Jiao. This settlement has been the recipient of large sums of capital, projected to enhance its heritage base and ensure its development as a viable destination. To guide understanding of the implications of these investments for local residents, a variety of models developed in the literature was consulted. Butler’s (1980) model, based on the idea of a cycle of tourism evolution, is the most prominent one, and its strengths and weaknesses have been widely discussed (Butler, 2006). While such instruments are of great value and have been applied to a wide variety of types of destination and at a diversity of scales, a new model, originally introduced to the field of rural geography (Mitchell 1998), is presented here. Like Butler’s, the new one of “creative destruction” uses stages but differs in two respects. First, Butler’s (1980) was developed initially with coastal resorts in mind, whereas the new model specifically addresses small towns with heritage resources. Second, the former is one-dimensional in that it considers the evolutionary process on the basis of a single variable, number of tourists, whereas the latter incorporates a greater number of variables. This paper introduces the creative destruction model and also applies it in a novel Chinese context.

This paper has examined the implications of tourism investment in in the Chinese water town, Zhu Jia Jiao, through application of the model of creative destruction. It has been revealed that over a relatively short period of time, the town has been transformed into an acclaimed destination. Compared to the situation in many Western settlements (Mitchell, 1998 and Mitchell et al., 2001), its progress through the first two stages of the model has been remarkably rapid. This rate of change may be attributed to the proximity of an extremely large, and relatively affluent, population; to the strength of both its built and cultural heritage; and, most importantly, to the level of investment that has been forthcoming. It is this latter characteristic that sets Zhu Jia Jiao apart from its Western equivalents, a characteristic that stems directly from the active role played by the public sector. As revealed in this study, governments of various levels have invested huge sums of money in the preservation, promotion, and production of this landscape of commodified heritage. These investments have yielded financial gains for those involved and have given Zhu Jia Jiao a place on the international destination map. The creation of this landscape, however, has not come without certain costs. Results of the resident survey suggest that for at least some, tourism has reduced (although not yet “destroyed”) their quality of life as increased crowds, higher prices, and inconvenience compromise the small-town environment to which they have been accustomed. Although the model predicts that this situation will worsen as investments and tourist numbers escalate, the ability of government to exert control over the development process may, in fact, enable the town to remain in its current state. If government does indeed limit arrivals, then Zhu Jia Jiao’s state of advanced commodification may be maintained. If market forces prevail, it is inevitable that the drive to accumulate capital will lead to the “creative destruction” of yet another heritage landscape. The creative destruction model has proven to be a useful template to guide the collection of data, to assist in the organization of information, and to suggest a direction that Zhu Jia Jiao and, by extension, other water towns that engage in tourism may follow. It is not a predictive model in the sense that it projects an inevitable future. Rather, in drawing upon the experiences of other places, it allows those responsible for the planning and management of small heritage towns to learn from what has happened elsewhere and to take actions to forestall some of the undesired consequences of tourism development that otherwise might be expected. In transposing a model developed in the West to China, it is perhaps surprising that the fit appears to be fairly good. However, it is not perfect, and local circumstances will likely influence the power held by particular stakeholders, their willingness and ability to guide or control the process, and the speed of transition through the stages. The rapid rate of economic development in the surrounding region, plus the substantial injections of capital by government, both directly and through government-owned companies, may mean that the early stages of the creative destruction process can proceed especially rapidly in China. In particular, the power of governments as both decisionmakers and investors require that they be incorporated as key players driving the creative-destruction process. This also suggests the merit of revisiting model applications in Western settings to consider more explicitly the possible influences of the policy context. This paper has introduced the model of creative destruction to the tourism literature and has applied it outside of the North American context for the first time. While the results of the Chinese case study are of intrinsic interest and are probably applicable to other such water towns in the hinterland of Shanghai, they are all the more significant in that they have been derived for a part of the world that is experiencing rapid growth in tourism but where assessments of the implications of this for heritage resources have seldom been undertaken.