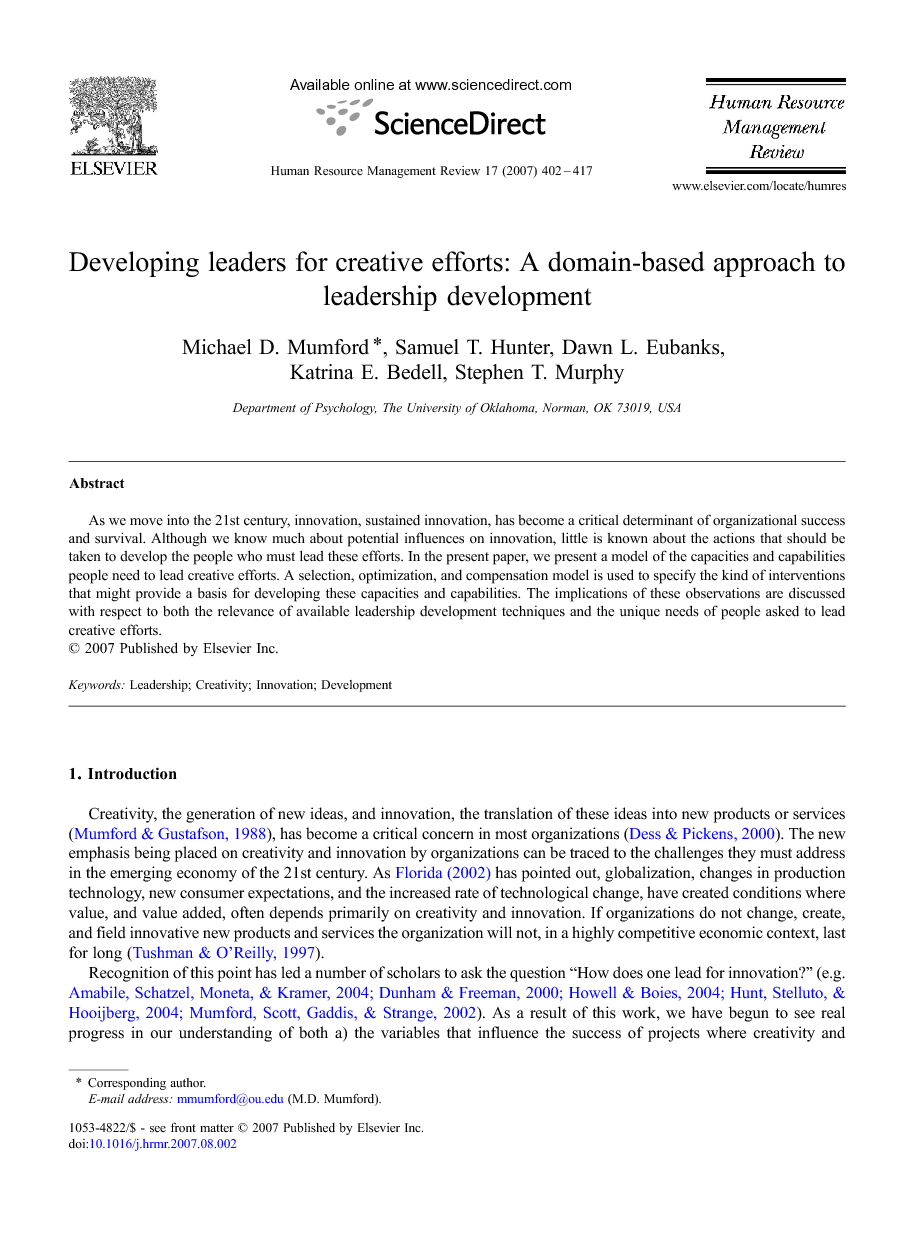 As we move into the 21st century, innovation, sustained innovation, has become a critical determinant of organizational success and survival. Although we know much about potential influences on innovation, little is known about the actions that should be taken to develop the people who must lead these efforts. In the present paper, we present a model of the capacities and capabilities people need to lead creative efforts. A selection, optimization, and compensation model is used to specify the kind of interventions that might provide a basis for developing these capacities and capabilities. The implications of these observations are discussed with respect to both the relevance of available leadership development techniques and the unique needs of people asked to lead creative efforts.

Creativity, the generation of new ideas, and innovation, the translation of these ideas into new products or services (Mumford & Gustafson, 1988), has become a critical concern in most organizations (Dess & Pickens, 2000). The new emphasis being placed on creativity and innovation by organizations can be traced to the challenges they must address in the emerging economy of the 21st century. As Florida (2002) has pointed out, globalization, changes in production technology, new consumer expectations, and the increased rate of technological change, have created conditions where value, and value added, often depends primarily on creativity and innovation. If organizations do not change, create, and field innovative new products and services the organization will not, in a highly competitive economic context, last for long (Tushman & O'Reilly, 1997). Recognition of this point has led a number of scholars to ask the question “How does one lead for innovation?” (e.g. Amabile et al., 2004, Dunham and Freeman, 2000, Howell and Boies, 2004, Hunt et al., 2004 and Mumford et al., 2002). As a result of this work, we have begun to see real progress in our understanding of both a) the variables that influence the success of projects where creativity and innovation take place (e.g. Keegan and Turner, 2002 and McGourty et al., 1996), and b) the actions that must be taken by leaders to insure the success of these projects (e.g. Dougherty and Hardy, 1996 and Mouly and Sankaran, 1999). For example, we know that climate, specifically a supportive intellectually challenging climate (Amabile et al., 1996, Bain et al., 2001, Hunter et al., in press-a and Hunter et al., in press-b), influences project success. This climate, however, appears to emerge in part as a function of leader role modeling (Jaussi & Dionne, 2003) and the standards leaders apply in idea evaluation (Mumford, Connelly, & Gaddis, 2003). We now know that due to their uncertainty organizations are often loath to pursue creative efforts (Simon, 1993). Leaders, as a result, must champion, or “sell”, projects (Markham & Aiman-Smith, 2001). Creative efforts by virtue of their uncertainty, moreover, are crisis prone. Leaders, accordingly, must manage these crises in such a way that sensemaking, and thus an adaptive response to crisis demands, becomes possible (Drazin, Glynn, & Kazanjian, 1999). The foregoing examples suffice to make our basic point. Leadership makes a difference in the ultimate success of creative and innovative projects. In fact, leadership not only makes a difference, it appears to make a big difference (Kidder, 1981). This point is nicely illustrated in a recent study by West et al. (2003). They obtained measures of leader creativity within healthcare teams developing a series of process innovations, and found that leader creativity was positively related, strongly positively related, to the success of the process innovations under consideration. In another study along these lines, Tierney, Farmer, and Graen (1999) obtained measures of the quality of leader–member exchange among 191 chemists working in research and development. They found that the quality of leader–member exchange produced correlations in the .30 range not only with indices of follower creativity and innovation, but also with indices of intrinsic motivation and use of requisite creative problem-solving strategies. The apparent impact of effective leadership on creativity and innovation brings to fore a new question. What can organizations do to insure effective leadership of these projects? One way organizations might seek to improve the performance of the people asked to lead creative projects is to try to develop the capabilities individuals need to guide these effects. The need for systematic developmental interventions becomes more pronounced when it is recognized that the many complex, and often seemingly contradictory, demands placed on the leaders of these projects make effective leadership an unusually daunting task (Mumford, Scott et al., 2002). The problem that arises in this regard, however, is that we simply do not know a great deal about how we should go about developing people to lead creative efforts. The reason we do not know much about leader development for innovation is that organizations have not, at least traditionally, seen anything unique about the requirements imposed on the leaders of creative efforts. With this point in mind, we will begin this article by examining the demands placed on the leaders of projects calling for creativity and innovation to identify requisite capacities and capabilities. We will then consider how organizations might facilitate the development of requisite capacities and capabilities using a selection, optimization, and compensation model. Based on this model, we will then propose some strategies that might be used to develop the kind of leadership cadre organizations now need if they wish to encourage sustained innovation.