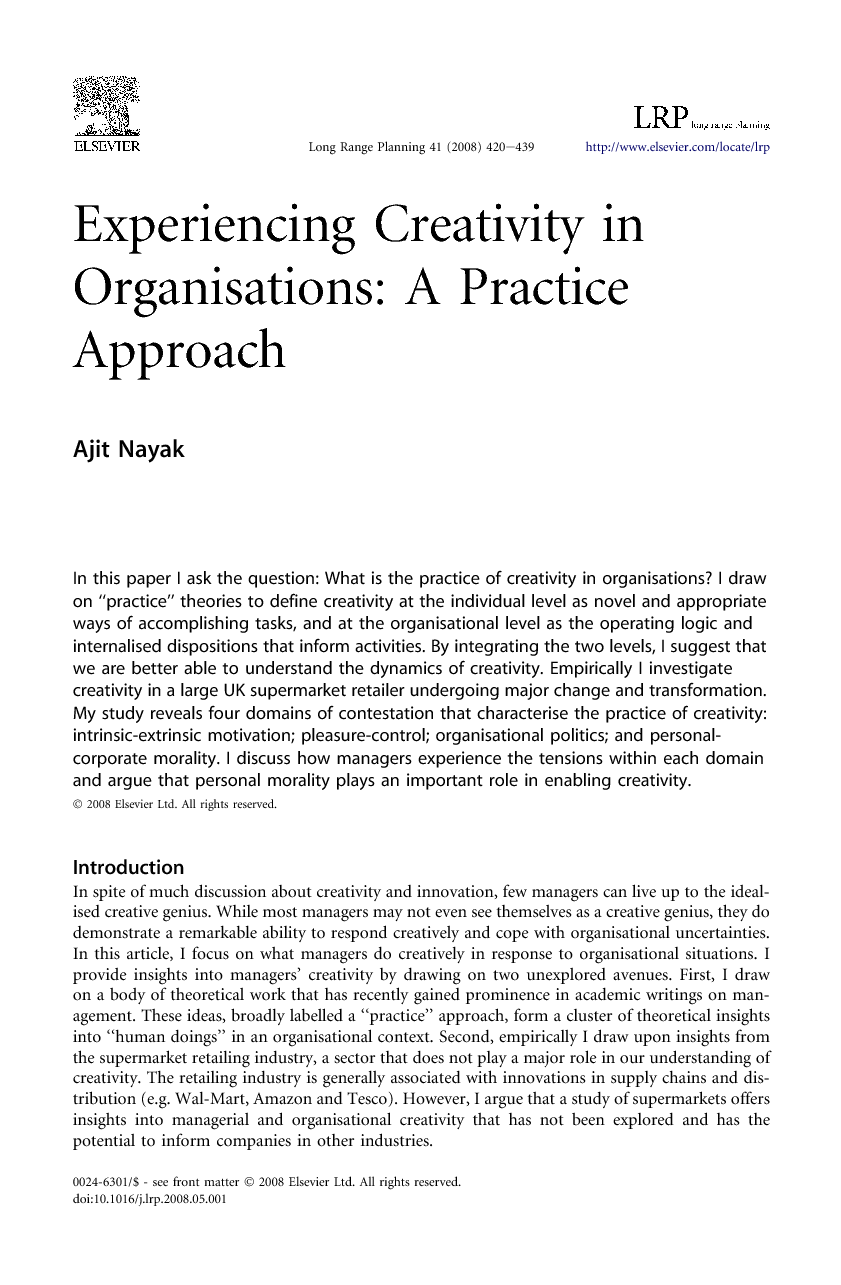 In this paper I ask the question: What is the practice of creativity in organisations? I draw on “practice” theories to define creativity at the individual level as novel and appropriate ways of accomplishing tasks, and at the organisational level as the operating logic and internalised dispositions that inform activities. By integrating the two levels, I suggest that we are better able to understand the dynamics of creativity. Empirically I investigate creativity in a large UK supermarket retailer undergoing major change and transformation. My study reveals four domains of contestation that characterise the practice of creativity: intrinsic-extrinsic motivation; pleasure-control; organisational politics; and personal-corporate morality. I discuss how managers experience the tensions within each domain and argue that personal morality plays an important role in enabling creativity.

The primary aim of this study was to examine the practice of creativity by integrating individual and organisational levels of analysis. From a practice approach, creativity is defined as the general dispositions and operational logic that guides managerial actions. One of the main criticisms of traditional creativity research is that it is overly biased by psychological studies that define and research creativity in non-organisational settings. By moving to a practice approach, I provide a definition of creativity that is more relevant to managers as managers. My empirical study, based on a large UK supermarket retailer, also departs from traditional settings such as R&D labs, technological companies and creative industries. By analysing managers' experience at Unico, this study has revealed how managers' experience four distinct but interrelated tensions and contestations. My findings suggest that the tensions between intrinsic-extrinsic motivation, organisational politics and pleasure play an important role in organisational creativity. Importantly, however, my findings reveal that these three contestations do not completely capture how managers experience creativity. In particular, my findings show that managers experience a contestation of personal morality which acts as an important contextual influence on how managers experience creativity. By shifting the focus from identifying characteristics of individual and organisational creativity which takes an objective approach to creativity, to a practice approach which emphasises internalised dispositions, practical logic and “making do” in accomplishing tasks, my study provides new insights into creativity. In the following sections, I examine the contribution of my study in terms of motivation, organisational politics, pleasure and morality. The importance of motivation for creativity cannot be overstated. Motivation can be informational, enabling or controlling.27 Furthermore, once we move the emphasis away from the motivation of the creative person in general to managerial practice we can see that there is a contestation between intrinsic and extrinsic motivation. In an organisational context, managers do not demonstrate unwavering identification with the love of their work as creative individuals such as artists, poets and scientists, but are constantly working to resolve the complex issue of their intrinsic and extrinsic motivation in response to accomplishing tasks. Creativity is often associated with fun and pleasure. Reframing work-life as fun, creative and pleasurable creates positive effects in terms of job satisfaction and enables managers to pursue ideas they find interesting and passionate.28 However, along with the positive effects, managers see the attempts to make work-life pleasurable with suspicion and cynicism. By viewing the changes in terms of new forms of management control managers find it difficult to resolve the tension between pleasure and control. My study demonstrates the importance of political affinities and issues of legitimacy for new ideas, but importantly it reveals that in a creative organisation, managers find it difficult to engage with intra-organisational politics. Political affinities are associated with temporary individual groupings with the distinct possibility of betraying these grouping in the near future. The constant restructuring and flexible working makes it difficult for individuals to develop consistent political affinities. Political negotiation in a creative organisation becomes personalised and makes it difficult for managers to subscribe to one set of values and norms. The issue of morality is largely ignored in creativity research. Although there was a moral imperative to early research in creativity, subsequent studies have overlooked the role of morality.29 In particular, creativity research within organisational settings has not examined the connection between morality and creativity. My study reveals that personal morality rises to the forefront of managers' experience of creativity during times of transformation and change. Freedom associated with creativity makes managers acutely aware of their responsibilities. Whereas bureaucratic work may cause managers to bracket the moralities they hold outside the workplace and adhere to the prevailing organisational ethics, in a creative organisation personal morality becomes central to work.30 Managers face the difficult task of justifying the “rightness” of their actions to themselves and to their colleagues. My findings show that in a creative organisation, the role of organisational ethics diminishes and managers rely on their own values and beliefs in engaging with their task motivation, organisational politics and pleasure at work. Personal morality enables managers to make a judgment and decide on what to do. It acts as the overriding operating logic that managers rely on in times of uncertainty. This is not to say that personal morality provides answers, but to recognise that personal morality affords the courage to act.31 It is instructive to pause and reflect on the notion of “judgment” in order to understand the full implications of personal morality for creativity. Managerial judgment that I refer to here ranges from weak to strong. In a weak sense, judgment implies expressing an opinion authoritatively. A relatively stronger sense is to assess, whereby the reasons and values behind the opinion is also authoritatively affirmed. An even stronger sense refers to associating rights and wrongs to actions and subscribing to a moral plane for deciding. Finally, in its strongest sense, exercising judgment implies taking a firm stand on the rights and wrongs of a situation. Personal morality lies in the background of exercising judgment in all its senses, from opine, assess, take as true or false and take a stand.32 In other words, personal morality acts as the binding force that holds together the tensions between intrinsic-extrinsic motivation, pleasure-control and organisational politics by providing managers with an operating logic to decide on a course of action (see Figure 2).