عنوان انگلیسی
The image of the creative city: Some reflections on urban branding in Turin
دانلود فوری مقاله + سفارش ترجمه 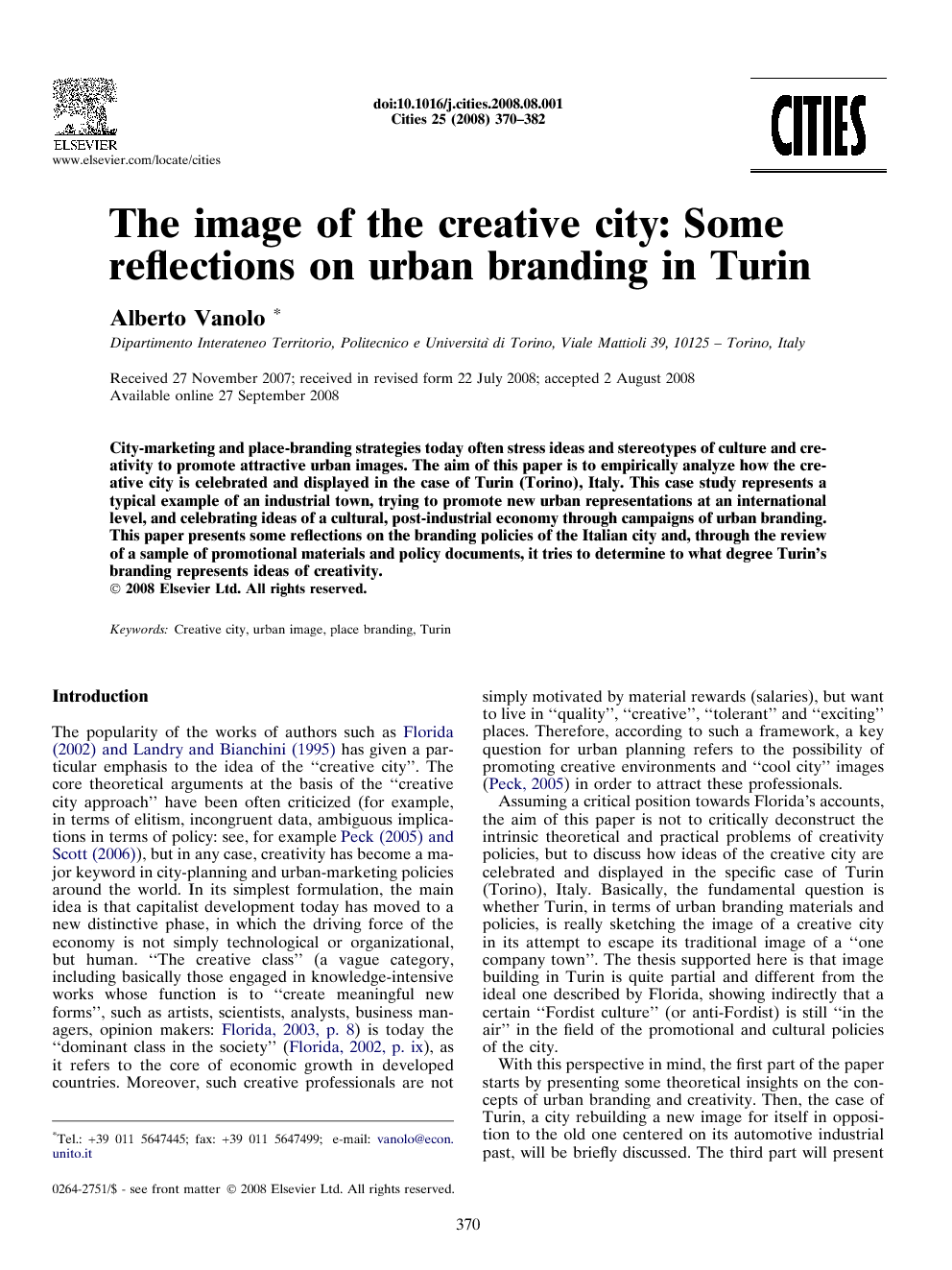 City-marketing and place-branding strategies today often stress ideas and stereotypes of culture and creativity to promote attractive urban images. The aim of this paper is to empirically analyze how the creative city is celebrated and displayed in the case of Turin (Torino), Italy. This case study represents a typical example of an industrial town, trying to promote new urban representations at an international level, and celebrating ideas of a cultural, post-industrial economy through campaigns of urban branding. This paper presents some reflections on the branding policies of the Italian city and, through the review of a sample of promotional materials and policy documents, it tries to determine to what degree Turin’s branding represents ideas of creativity.

The popularity of the works of authors such as Florida, 2002 and Landry and Bianchini, 1995 has given a particular emphasis to the idea of the “creative city”. The core theoretical arguments at the basis of the “creative city approach” have been often criticized (for example, in terms of elitism, incongruent data, ambiguous implications in terms of policy: see, for example Peck, 2005 and Scott, 2006), but in any case, creativity has become a major keyword in city-planning and urban-marketing policies around the world. In its simplest formulation, the main idea is that capitalist development today has moved to a new distinctive phase, in which the driving force of the economy is not simply technological or organizational, but human. “The creative class” (a vague category, including basically those engaged in knowledge-intensive works whose function is to “create meaningful new forms”, such as artists, scientists, analysts, business managers, opinion makers: Florida, 2003, p. 8) is today the “dominant class in the society” (Florida, 2002, p. ix), as it refers to the core of economic growth in developed countries. Moreover, such creative professionals are not simply motivated by material rewards (salaries), but want to live in “quality”, “creative”, “tolerant” and “exciting” places. Therefore, according to such a framework, a key question for urban planning refers to the possibility of promoting creative environments and “cool city” images (Peck, 2005) in order to attract these professionals. Assuming a critical position towards Florida’s accounts, the aim of this paper is not to critically deconstruct the intrinsic theoretical and practical problems of creativity policies, but to discuss how ideas of the creative city are celebrated and displayed in the specific case of Turin (Torino), Italy. Basically, the fundamental question is whether Turin, in terms of urban branding materials and policies, is really sketching the image of a creative city in its attempt to escape its traditional image of a “one company town”. The thesis supported here is that image building in Turin is quite partial and different from the ideal one described by Florida, showing indirectly that a certain “Fordist culture” (or anti-Fordist) is still “in the air” in the field of the promotional and cultural policies of the city. With this perspective in mind, the first part of the paper starts by presenting some theoretical insights on the concepts of urban branding and creativity. Then, the case of Turin, a city rebuilding a new image for itself in opposition to the old one centered on its automotive industrial past, will be briefly discussed. The third part will present some results from an empirical analysis carried out on promotional materials. Finally, some reflections will emphasize the partial nature of image building in the framework of creativity in Turin.

In the perspective of this analysis, it seems that the creativity debate has gained some ground among urban promoters in Turin. Certainly, urban creativity is not at all a revolutionary approach towards urban policies; rather, it often involves a “cheap” group of heterogeneous actions (from supporting the local art scene to the organization of public events) that can easily create a public consensus (being basically risk-zero), even in the face of possible negative feedback and outcomes that are difficult to quantify (Peck, 2005). In the realm of urban branding, such a critical position is also plausible. Urban images of creativity may appear to be nothing new, but just a new slogan picking up old stereotyped images concerning the urban milieu. In fact, images celebrating the buzz, the serendipity, the street life, and the cultural milieu of cities were widely prevalent in urban-marketing materials years ago, before the current creative fashion, because these elements refer, in fact, to the core of urban life (Short and Kim, 1999 and Landry, 2006). Anyhow, it can be argued that probably new and increased attention is being given to creativity as an urban asset. The high-tech focus discussed earlier has lost some ground with respect to social images of creativity, together with an explosion of urban events linked to these topics. Many cities are now investing heavily in cultural industries and cultural images, with creativity as an important umbrella concept, even if the urban images and stereotypes are the same as yesterday’s. The urban milieu, and particularly images of public spaces, crowded squares, and cultural events still remains the basis of the attractiveness of cities, both in the eyes of the creative class and for the rest of us. Anyway, not every city displays ideas of creativity using exactly the same set of stereotypes, as testified by the case of Turin, where certain dimensions in the celebration of creativity are missing. What is certainly new in Turin (and in the planning landscape in general) is this growing interest in the analysis and marketing of many dimensions of urban attractiveness which were until recently often neglected, and a certain broadening of the promotional messages provided by the city. Cultural image building, in the case of the former “capital of the automotive industry”, seems to be particularly dynamic, but in the framework of creativity, still incomplete, because the emphasis seems to be placed, on the one hand, on “high culture” and events, and on the other hand, on the promotion of ready-to-consume culture, as in the case of gourmet foods. Moreover, little attention has been given in the realm of urban images to the importance of diversity, tolerance, multiculturalism, and education—the “human capital” dimension of creativity discussed as central in the current economic scenario by Florida (2003). Moreover, this orientation seems to reproduce a certain elitist vision of the creative class: on the one hand, there are images targeting the high-culture audience (classical art lovers, for example), and on the other hand, a popular commoditization of culture. To put it briefly, the creative class is implicitly considered as something to attract because of its potential to consume, i.e., because of its capability to increase the demand for consumer goods, and not for its intrinsic innovative potential and its capability to improve the quality of a location, as stressed by the sociologist Florida and others like him.11 A suggestive interpretation of such a consideration may refer to old Fordist based visions of the economy—an economy where the city produces and tries to sell “goods” to different audiences, including now the creative audience. In other word, it seems to persist in Turin a Fordist heritage which is still challenging to deal with: despite a progressive, formal emancipation from Fordist industrial visions and from Fiat, it seems to persist a deeply Fordist culture in the promotion of a cultural face for the city.