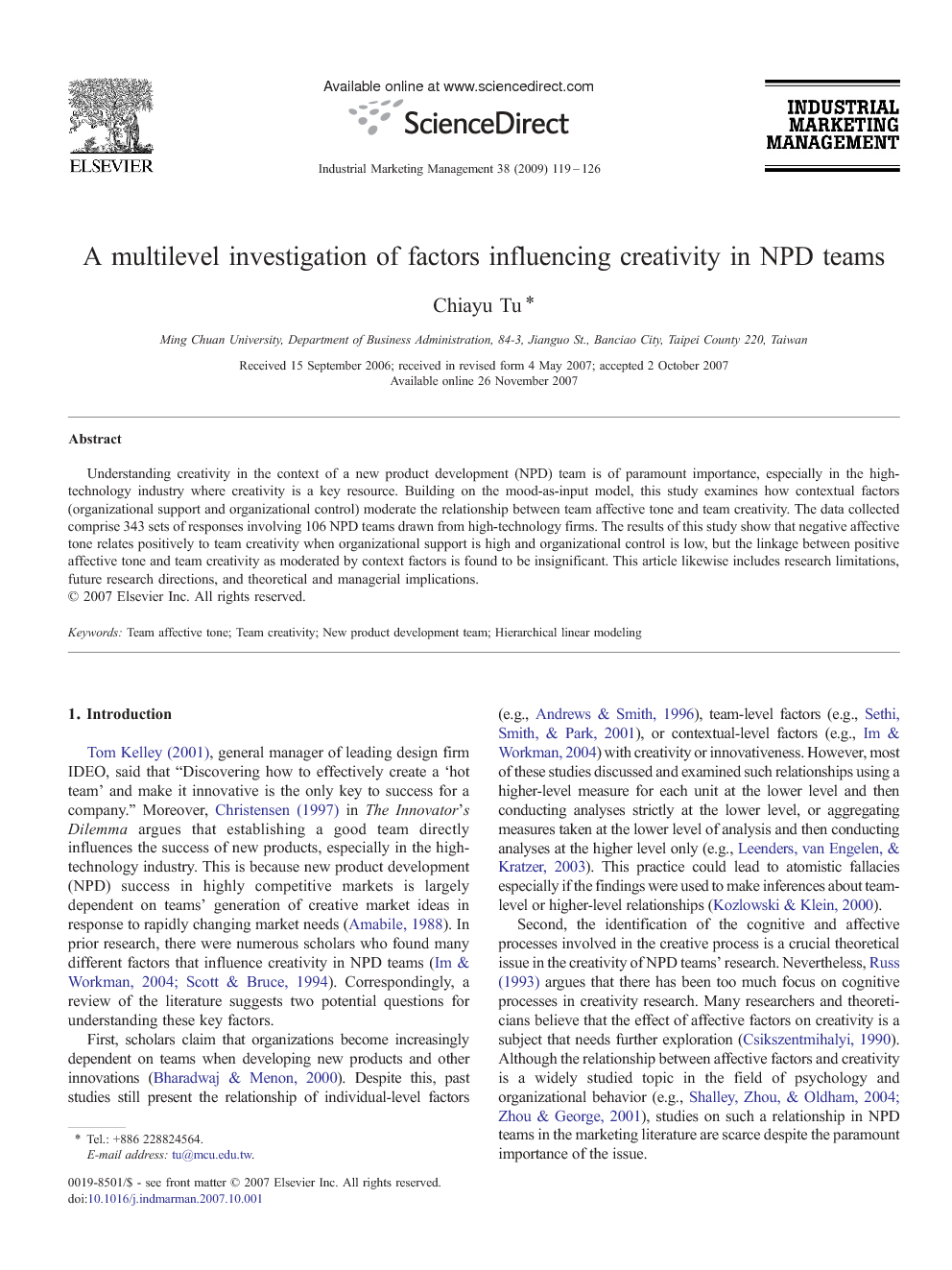 Understanding creativity in the context of a new product development (NPD) team is of paramount importance, especially in the high-technology industry where creativity is a key resource. Building on the mood-as-input model, this study examines how contextual factors (organizational support and organizational control) moderate the relationship between team affective tone and team creativity. The data collected comprise 343 sets of responses involving 106 NPD teams drawn from high-technology firms. The results of this study show that negative affective tone relates positively to team creativity when organizational support is high and organizational control is low, but the linkage between positive affective tone and team creativity as moderated by context factors is found to be insignificant. This article likewise includes research limitations, future research directions, and theoretical and managerial implications.

Tom Kelley (2001), general manager of leading design firm IDEO, said that “Discovering how to effectively create a ‘hot team’ and make it innovative is the only key to success for a company.” Moreover, Christensen (1997) in The Innovator's Dilemma argues that establishing a good team directly influences the success of new products, especially in the high-technology industry. This is because new product development (NPD) success in highly competitive markets is largely dependent on teams' generation of creative market ideas in response to rapidly changing market needs (Amabile, 1988). In prior research, there were numerous scholars who found many different factors that influence creativity in NPD teams ( Im and Workman, 2004 and Scott and Bruce, 1994). Correspondingly, a review of the literature suggests two potential questions for understanding these key factors. First, scholars claim that organizations become increasingly dependent on teams when developing new products and other innovations (Bharadwaj & Menon, 2000). Despite this, past studies still present the relationship of individual-level factors (e.g., Andrews & Smith, 1996), team-level factors (e.g., Sethi, Smith, & Park, 2001), or contextual-level factors (e.g., Im & Workman, 2004) with creativity or innovativeness. However, most of these studies discussed and examined such relationships using a higher-level measure for each unit at the lower level and then conducting analyses strictly at the lower level, or aggregating measures taken at the lower level of analysis and then conducting analyses at the higher level only (e.g., Leenders, van Engelen, & Kratzer, 2003). This practice could lead to atomistic fallacies especially if the findings were used to make inferences about team-level or higher-level relationships (Kozlowski & Klein, 2000). Second, the identification of the cognitive and affective processes involved in the creative process is a crucial theoretical issue in the creativity of NPD teams' research. Nevertheless, Russ (1993) argues that there has been too much focus on cognitive processes in creativity research. Many researchers and theoreticians believe that the effect of affective factors on creativity is a subject that needs further exploration (Csikszentmihalyi, 1990). Although the relationship between affective factors and creativity is a widely studied topic in the field of psychology and organizational behavior (e.g., Shalley et al., 2004 and Zhou and George, 2001), studies on such a relationship in NPD teams in the marketing literature are scarce despite the paramount importance of the issue. Against these backdrops, a cross-level model should be employed into which team- and contextual-level factors are integrated; likewise, it is necessary to explore the importance of the relationship between contextual factors (organizational support and organizational control) and NPD team affective tone and team creativity. This study adopts Martin and Stoner's (1996) mood-as-input model, which is particularly relevant for understanding the relationship between negative and positive affect and the creativity model (e.g., Martin et al., 1997 and Martin and Stoner, 1996). This model states that people use their current affect as an informational cue and reflect its context-dependent nature in their behavior. On the basis of the mood-as-input model, this study contributes to the literature by identifying the contextual-level factors which affect the relationship between team affective tone and team creativity in an NPD team. This study has three objectives. First, this study explores relevant literature by focusing on key variables and then deriving the hypotheses from these. Second, it uses a cross-level model to examine how contextual-level factors moderate the relationship between team affective tone and team creativity within the NPD team context. Finally, it discusses the research limitations, future research directions, and theoretical and managerial implications of the study in light of the findings.

Table 1 shows the means, standard deviations, and correlations among all the variables. As these relationships were largely consistent with theories and empirical evidence on team creativity, the results provided criterion-related validity evidence for team affective tone, team creativity, organizational support, and organizational control.This article hypothesizes that both team and context variables relate to team creativity. Thus, using HLM, it first estimates a null model in which no predictors are specified for either level 1 or level 2 functions to test the significant level of the level 2 residual variances of the intercept (τ = 4.42, p < .001). The ICC (1) was .14, indicating that 14% of the variance in team creativity resided between organizations, and that 86% of the variance resided within organizations. This provides evidence that disparity exists among organizations, and the sample is worth for a multilevel analysis. Next, the core of the conceptual model pertains to the cross-level interactions between team- and contextual-level variables. This study tests the cross-level interactions via using the slopes-as-outcomes models. The slopes-as-outcomes model equations are: equation(1) View the MathML sourceLevel-1:TeamCreativityij=β0j+β1j(Positiveaffectivetone)+β2j(Negativeaffectivetone)+rij Turn MathJax on equation(2) View the MathML sourceLevel-2:β0j=γ00+γ01(OrganizationalSupport)+γ02(OrganizationalControl)+U0j Turn MathJax on equation(3) View the MathML sourceβ1j=γ10+γ11(OrganizationalSupport)+γ12(OrganizationalControl)+U1j Turn MathJax on equation(4) View the MathML sourceβ2j=γ20+γ21(OrganizationalSupport)+γ22(OrganizationalControl)+U2 Hypothesis 1 and Hypothesis 2 propose that context variables moderate the relationship between team affective tone and team creativity. The results for this model indicate that both positive and negative team affect had significant random variances (τ = .27, p < .01 and τ = .37, p < .001, respectively). This finding suggests that significant variability occurs in the level 1 team affective tone–team creativity relationship across organizations. Do context factors explain? Organizational support (γ21 = .27, se = .32, t = 2.43, p < .01) and organizational control (γ22 = − .25, se = .31, t = 2.71, p < .01) significantly predict the negative affective tone–team creativity slopes only (see Table 2). Therefore, the findings support H1 but not H2.