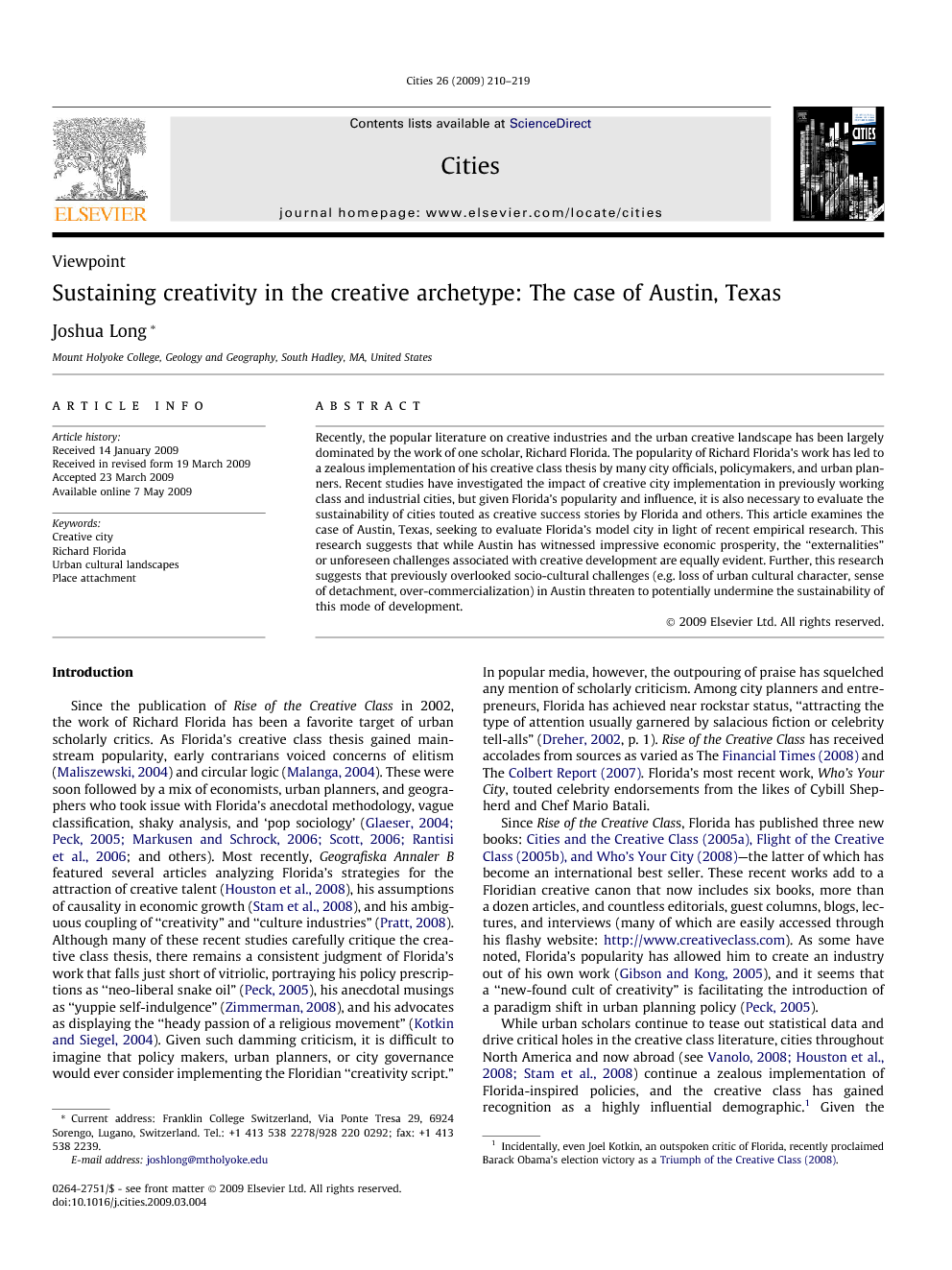 Recently, the popular literature on creative industries and the urban creative landscape has been largely dominated by the work of one scholar, Richard Florida. The popularity of Richard Florida’s work has led to a zealous implementation of his creative class thesis by many city officials, policymakers, and urban planners. Recent studies have investigated the impact of creative city implementation in previously working class and industrial cities, but given Florida’s popularity and influence, it is also necessary to evaluate the sustainability of cities touted as creative success stories by Florida and others. This article examines the case of Austin, Texas, seeking to evaluate Florida’s model city in light of recent empirical research. This research suggests that while Austin has witnessed impressive economic prosperity, the “externalities” or unforeseen challenges associated with creative development are equally evident. Further, this research suggests that previously overlooked socio-cultural challenges (e.g. loss of urban cultural character, sense of detachment, over-commercialization) in Austin threaten to potentially undermine the sustainability of this mode of development.

Since the publication of Rise of the Creative Class in 2002, the work of Richard Florida has been a favorite target of urban scholarly critics. As Florida’s creative class thesis gained mainstream popularity, early contrarians voiced concerns of elitism (Maliszewski, 2004) and circular logic (Malanga, 2004). These were soon followed by a mix of economists, urban planners, and geographers who took issue with Florida’s anecdotal methodology, vague classification, shaky analysis, and ‘pop sociology’ ( Glaeser, 2004, Peck, 2005, Markusen and Schrock, 2006, Scott, 2006 and Rantisi et al., 2006; and others). Most recently, Geografiska Annaler B featured several articles analyzing Florida’s strategies for the attraction of creative talent (Houston et al., 2008), his assumptions of causality in economic growth (Stam et al., 2008), and his ambiguous coupling of “creativity” and “culture industries” (Pratt, 2008). Although many of these recent studies carefully critique the creative class thesis, there remains a consistent judgment of Florida’s work that falls just short of vitriolic, portraying his policy prescriptions as “neo-liberal snake oil” (Peck, 2005), his anecdotal musings as “yuppie self-indulgence” (Zimmerman, 2008), and his advocates as displaying the “heady passion of a religious movement” (Kotkin and Siegel, 2004). Given such damming criticism, it is difficult to imagine that policy makers, urban planners, or city governance would ever consider implementing the Floridian “creativity script.” In popular media, however, the outpouring of praise has squelched any mention of scholarly criticism. Among city planners and entrepreneurs, Florida has achieved near rockstar status, “attracting the type of attention usually garnered by salacious fiction or celebrity tell-alls” (Dreher, 2002, p. 1). Rise of the Creative Class has received accolades from sources as varied as The Financial Times (2008) and The Colbert Report (2007). Florida’s most recent work, Who’s Your City, touted celebrity endorsements from the likes of Cybill Shepherd and Chef Mario Batali. Since Rise of the Creative Class, Florida has published three new books: Florida, 2005a, Florida, 2005b and Florida, 2008—the latter of which has become an international best seller. These recent works add to a Floridian creative canon that now includes six books, more than a dozen articles, and countless editorials, guest columns, blogs, lectures, and interviews (many of which are easily accessed through his flashy website: http://www.creativeclass.com). As some have noted, Florida’s popularity has allowed him to create an industry out of his own work (Gibson and Kong, 2005), and it seems that a “new-found cult of creativity” is facilitating the introduction of a paradigm shift in urban planning policy (Peck, 2005). While urban scholars continue to tease out statistical data and drive critical holes in the creative class literature, cities throughout North America and now abroad (see Vanolo, 2008, Houston et al., 2008 and Stam et al., 2008) continue a zealous implementation of Florida-inspired policies, and the creative class has gained recognition as a highly influential demographic.1 Given the apparent disconnect between academic opinion and popular support, it is evident that extensive empirical scholarship is needed to better comprehend the effects of the “creative city” phenomenon. This essay is not the first to appeal for further investigation. Most notably, Rantisi et al., 2006) pointed to several possible areas for future exploration, including “a clear understanding of the term ‘creativity,”’ the “opportunities and challenges” confronting a range of workers in creative cities, and “prospects for smaller cities or rural settings and for contexts in the Global South” (1795-6). Adding to these suggestions, other avenues have been explored empirically, most notably the investigation of the “politics of city regionalism and livability” in the creative city (McCann, 2007, p. 188), and the possible consequences of “downtown-based property-led development” in blue collar-turned-creative cities (Zimmerman, 2008, p. 230). Following the example of Vanolo, 2008 and Zimmerman, 2008, this paper seeks to illuminate the far-reaching effects of creative city development through empirical analysis. But where these scholars chose to investigate the active promotion of creative strategies in industrial cities (Turin in the case of Vanolo; Milwaukee in the case of Zimmerman), this study critically examines Florida’s model for creative success: Austin, Texas. In doing so, this article considers the recent work of creative class critics, but largely seeks to analyze the situation of Austin in light of Florida’s own scholarship. While Austin has experienced many of the recognized “externalities”2 (i.e. negative side-effects) of creative development, research suggests that there are further socio-cultural challenges present. A vocal portion of Austin’s population has expressed serious concerns over the loss of cultural character, sense of detachment, and social polarization associated with rapid growth and landscape transformation. This paper suggests that, despite their assumingly intangible nature, these cultural expressions may lead to very real consequences for creative cities. Ironically, these problems seem most evident in the city that is considered the greatest creative success story, Austin. Based upon the case of Austin, this research questions whether Floridian strategies for creative development are as sustainable as their popularity implies.

The goal of this research is to evaluate the effect of creative city strategies in Austin, Texas, in light of Richard Florida’s creative class thesis. Research suggested that Florida’s general observations of Austin’s economic success were accurate. Further, Florida’s arguments regarding the importance of a diverse, tolerant context and authentic urban vibrancy for the stimulation of creativity are worthwhile. However, Florida’s cursory treatment of “externalities” in the creative city masks the serious challenges that accompany creative strategies for growth. The softening of these issues, as well as the whitewashing of further socio-cultural challenges (e.g. commercialization, sense of detachment, loss of urban cultural character), is a serious threat to sustainable urban development. As policymakers and city planners attempt to mimic the successes of Florida’s creative success stories, they must be made aware of the potential challenges. Instead, Florida’s call to action palliates the problems with creative cities and suggests a zealous implementation of creative strategies. In cities newly attempting the Floridian creative makeover, this may prove a risky experiment. As the case of Milwaukee demonstrates, the attempt to cultivate creativity in a traditionally Fordist, working class city can greatly exacerbate the existing socio-economic divide. Even in the model creative city, Austin, the challenges of creative development are evident. Inequality, housing costs, gentrification, uneven regional development, sprawl and ecological decay, mounting stress and anxiety, and political polarization are all present and potentially threaten the sustainability of creativity. Even if these “externalities” represent merely the growing pains of a burgeoning creative Mecca, there remains the question of creativity itself. Throughout his work, Richard Florida reiterates the importance of an authentic cultural context for the cultivation of creativity. The creative class requires stimuli, social production, interaction, and the vibrancy that certain cities possess. This paper suggests that Austin’s rapid growth and continued implementation of creative development strategies has resulted in a decline of the original, authentic creative context. Development oriented toward a specific class of workers (Florida’s creative class) has resulted in the displacement of Austin’s organic, authentic cultural landscapes in favor of manufactured landscapes of cultural and experiential consumption. If the concerns of interviewees are correct, then Austin is at an important creative crossroads. Whether or not Austin will maintain its celebrated vibe of non-conformity and tolerance will rely heavily on the degree of civic participation and public action. As many interviewees noted, it is the people that make Austin weird, and Austin’s well-involved citizenry hold the potential to resist further changes to Austin’s urban character and maintain the city’s creative cultural landscape. This research revealed that even in the model creative city, sustaining creativity is a weighty exercise that brings a mixed bag of economic benefits and socio-cultural challenges.