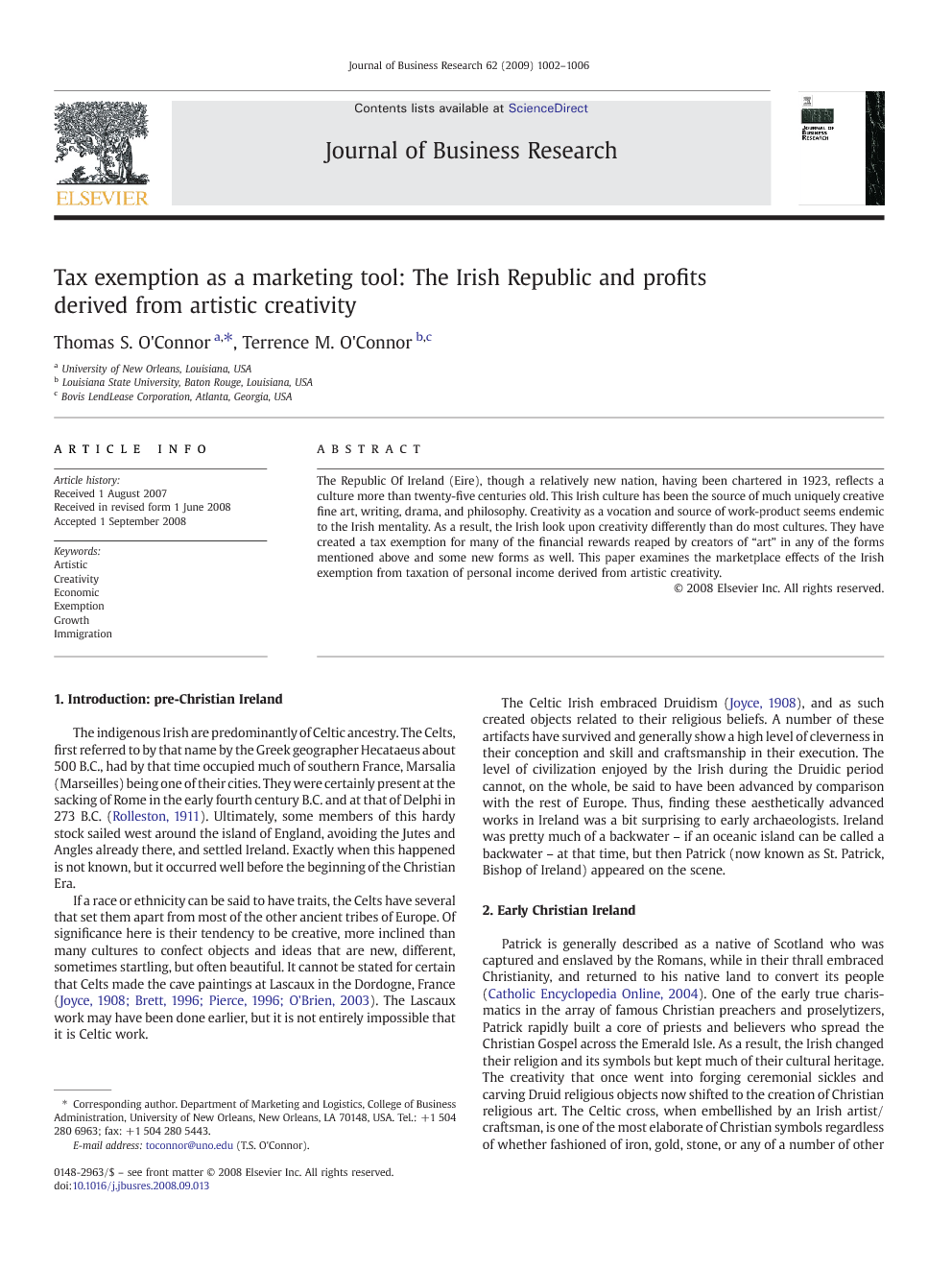 The Republic Of Ireland (Eire), though a relatively new nation, having been chartered in 1923, reflects a culture more than twenty-five centuries old. This Irish culture has been the source of much uniquely creative fine art, writing, drama, and philosophy. Creativity as a vocation and source of work-product seems endemic to the Irish mentality. As a result, the Irish look upon creativity differently than do most cultures. They have created a tax exemption for many of the financial rewards reaped by creators of “art” in any of the forms mentioned above and some new forms as well. This paper examines the marketplace effects of the Irish exemption from taxation of personal income derived from artistic creativity.

The indigenous Irish are predominantly of Celtic ancestry. The Celts, first referred to by that name by the Greek geographer Hecataeus about 500 B.C., had by that time occupied much of southern France, Marsalia (Marseilles) being one of their cities. They were certainly present at the sacking of Rome in the early fourth century B.C. and at that of Delphi in 273 B.C. (Rolleston, 1911). Ultimately, some members of this hardy stock sailed west around the island of England, avoiding the Jutes and Angles already there, and settled Ireland. Exactly when this happened is not known, but it occurred well before the beginning of the Christian Era. If a race or ethnicity can be said to have traits, the Celts have several that set them apart from most of the other ancient tribes of Europe. Of significance here is their tendency to be creative, more inclined than many cultures to confect objects and ideas that are new, different, sometimes startling, but often beautiful. It cannot be stated for certain that Celts made the cave paintings at Lascaux in the Dordogne, France (Joyce, 1908, Brett, 1996, Pierce, 1996 and O, 2003). The Lascaux work may have been done earlier, but it is not entirely impossible that it is Celtic work. The Celtic Irish embraced Druidism (Joyce, 1908), and as such created objects related to their religious beliefs. A number of these artifacts have survived and generally show a high level of cleverness in their conception and skill and craftsmanship in their execution. The level of civilization enjoyed by the Irish during the Druidic period cannot, on the whole, be said to have been advanced by comparison with the rest of Europe. Thus, finding these aesthetically advanced works in Ireland was a bit surprising to early archaeologists. Ireland was pretty much of a backwater – if an oceanic island can be called a backwater – at that time, but then Patrick (now known as St. Patrick, Bishop of Ireland) appeared on the scene.

The effect of what, on its face, would appear to be a rather modest tax exemption created by what some would look on as a country of small population and modest means has, in terms of the national wealth, been significant, drawing to the country productive and creative citizens from other nations and retaining in that country similarly creative and productive natives. It has, in addition, fostered the development of a new industry – production of software – in a nation whose primary asset has historically been its people and their capacity for creativity. The exemption has, in every respect, created much more wealth to the nation of Eire than had the exemption not been granted.