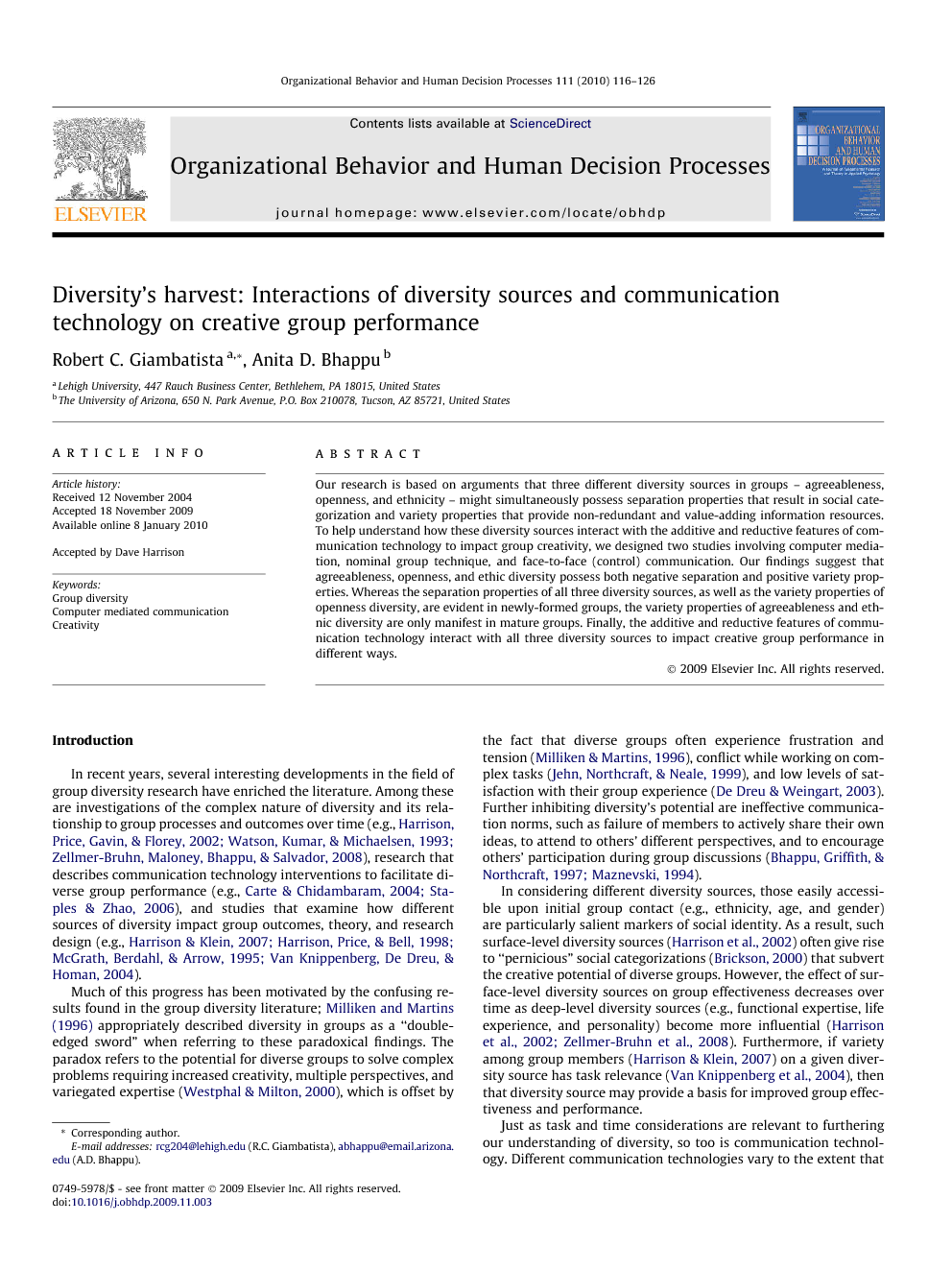 In recent years, several interesting developments in the field of group diversity research have enriched the literature. Among these are investigations of the complex nature of diversity and its relationship to group processes and outcomes over time (e.g., Harrison et al., 2002, Watson et al., 1993 and Zellmer-Bruhn et al., 2008), research that describes communication technology interventions to facilitate diverse group performance (e.g., Carte and Chidambaram, 2004 and Staples and Zhao, 2006), and studies that examine how different sources of diversity impact group outcomes, theory, and research design (e.g., Harrison and Klein, 2007, Harrison et al., 1998, McGrath et al., 1995 and Van Knippenberg et al., 2004). Much of this progress has been motivated by the confusing results found in the group diversity literature; Milliken and Martins (1996) appropriately described diversity in groups as a “double-edged sword” when referring to these paradoxical findings. The paradox refers to the potential for diverse groups to solve complex problems requiring increased creativity, multiple perspectives, and variegated expertise (Westphal & Milton, 2000), which is offset by the fact that diverse groups often experience frustration and tension (Milliken & Martins, 1996), conflict while working on complex tasks (Jehn, Northcraft, & Neale, 1999), and low levels of satisfaction with their group experience (De Dreu & Weingart, 2003). Further inhibiting diversity’s potential are ineffective communication norms, such as failure of members to actively share their own ideas, to attend to others’ different perspectives, and to encourage others’ participation during group discussions (Bhappu et al., 1997 and Maznevski, 1994). In considering different diversity sources, those easily accessible upon initial group contact (e.g., ethnicity, age, and gender) are particularly salient markers of social identity. As a result, such surface-level diversity sources (Harrison et al., 2002) often give rise to “pernicious” social categorizations (Brickson, 2000) that subvert the creative potential of diverse groups. However, the effect of surface-level diversity sources on group effectiveness decreases over time as deep-level diversity sources (e.g., functional expertise, life experience, and personality) become more influential (Harrison et al., 2002 and Zellmer-Bruhn et al., 2008). Furthermore, if variety among group members (Harrison & Klein, 2007) on a given diversity source has task relevance (Van Knippenberg et al., 2004), then that diversity source may provide a basis for improved group effectiveness and performance. Just as task and time considerations are relevant to furthering our understanding of diversity, so too is communication technology. Different communication technologies vary to the extent that they possess reductive or additive capabilities (Carte & Chidambaram, 2004). Reductive features essentially strip out elements of the communication environment (e.g., visual and vocal cues about ethnicity, age, and gender) that often give rise to social categorizations whereas additive features (e.g., the ability for individuals to share ideas in parallel) enhance group performance. Given that diversity in groups is a double-edged sword, the potential of communication technologies to reduce social categorization while enhancing group decision-making is of particular interest to some diversity scholars (DeSanctis & Monge, 1999). This study was motivated by consideration of these and related findings in the literature on diversity in groups. We were particularly intrigued by the possibility that the additive and reductive features of communication technology might positively impact the effect of different diversity sources on group outcomes depending on the propensity of a given diversity source to elicit social categorizations and its relevance to the task at hand. Therefore, we conducted two studies to further explore this possibility. In Study 1, we ran a field experiment among student groups who had been working together for a semester. They performed a creative decision-making task using their choice of either computer-mediated (CMC) or face-to-face (FTF) communication. In Study 2, we further explored these findings using a larger sample, random assignment of individuals to newly-formed groups based on personality diversity, random assignment to communication-technology conditions, a third experimental condition of the nominal group technique (NGT) (Van de Ven & Delbecq, 1971), and a more complex creative, decision-making task.