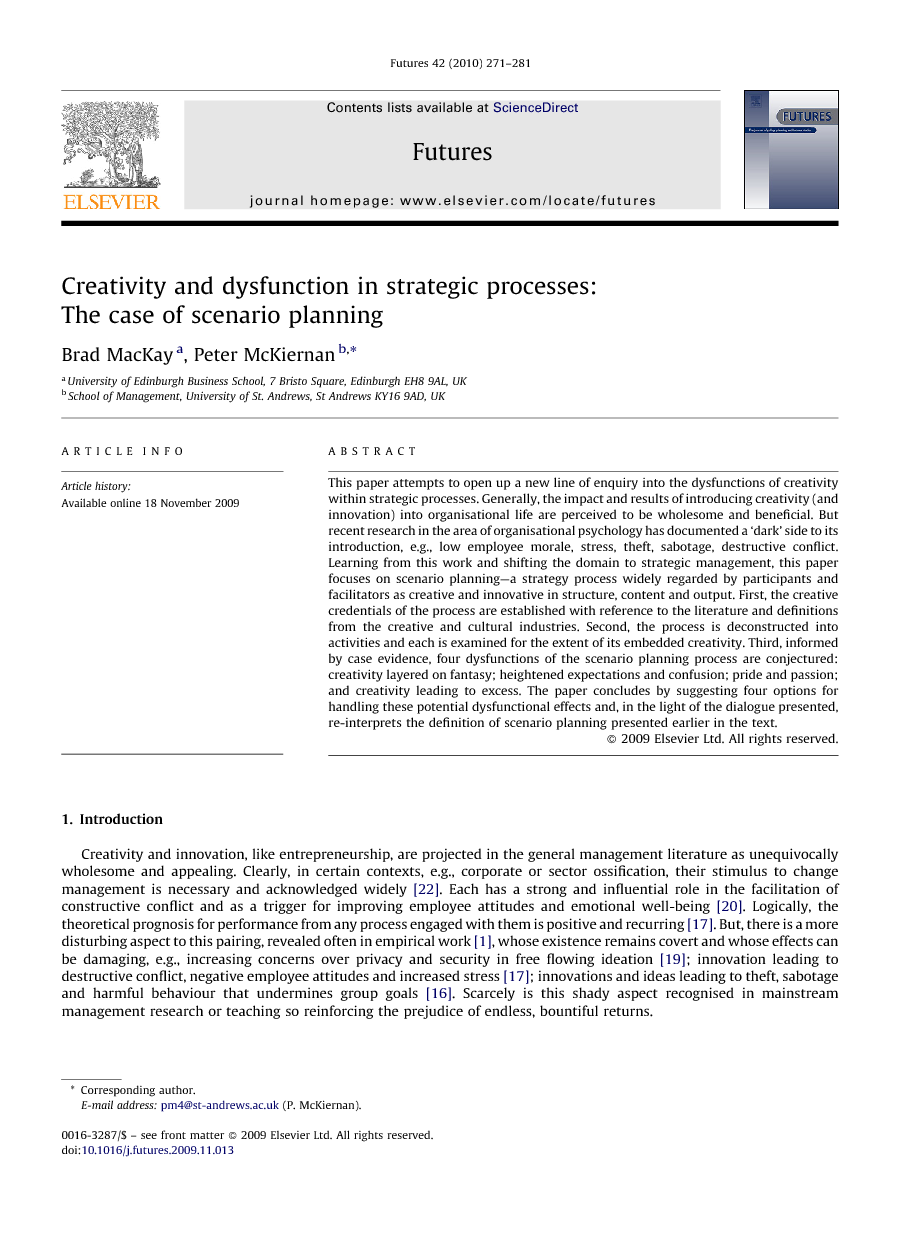 This paper attempts to open up a new line of enquiry into the dysfunctions of creativity within strategic processes. Generally, the impact and results of introducing creativity (and innovation) into organisational life are perceived to be wholesome and beneficial. But recent research in the area of organisational psychology has documented a ‘dark’ side to its introduction, e.g., low employee morale, stress, theft, sabotage, destructive conflict. Learning from this work and shifting the domain to strategic management, this paper focuses on scenario planning—a strategy process widely regarded by participants and facilitators as creative and innovative in structure, content and output. First, the creative credentials of the process are established with reference to the literature and definitions from the creative and cultural industries. Second, the process is deconstructed into activities and each is examined for the extent of its embedded creativity. Third, informed by case evidence, four dysfunctions of the scenario planning process are conjectured: creativity layered on fantasy; heightened expectations and confusion; pride and passion; and creativity leading to excess. The paper concludes by suggesting four options for handling these potential dysfunctional effects and, in the light of the dialogue presented, re-interprets the definition of scenario planning presented earlier in the text.

Creativity and innovation, like entrepreneurship, are projected in the general management literature as unequivocally wholesome and appealing. Clearly, in certain contexts, e.g., corporate or sector ossification, their stimulus to change management is necessary and acknowledged widely [22]. Each has a strong and influential role in the facilitation of constructive conflict and as a trigger for improving employee attitudes and emotional well-being [20]. Logically, the theoretical prognosis for performance from any process engaged with them is positive and recurring [17]. But, there is a more disturbing aspect to this pairing, revealed often in empirical work [1], whose existence remains covert and whose effects can be damaging, e.g., increasing concerns over privacy and security in free flowing ideation [19]; innovation leading to destructive conflict, negative employee attitudes and increased stress [17]; innovations and ideas leading to theft, sabotage and harmful behaviour that undermines group goals [16]. Scarcely is this shady aspect recognised in mainstream management research or teaching so reinforcing the prejudice of endless, bountiful returns. The purpose of this paper is to begin the exploration for such dysfunctional effects in a foresight process renowned for its creative and innovative ingredients and experiences, and one that has been adopted widely in recent years by nations, organisations and individuals—scenario planning. Although ‘pitfalls’ of the scenario planning process have been identified previously [34], these tend to be generic obstacles to getting a ‘good job done’ rather than a deep, investigative focus on the potential dysfunctions of the ‘creative’ aspects of the process. To achieve this objective, the paper is structured into four sections. The first section of the paper examines the creative and innovative process as depicted, in the main, by social psychologists concerned with managerial productivity and human performance and spirit. Definitional issues are discussed and the psychologist's emphases are informed by literature from the creative (or cultural) industries on the nature of the creative process and its constituent elements. The second section recognises the rich arsenal of scenario planning processes and focuses upon those with a deep heuristic platform underpinned by ‘disciplined intuition’ or ‘intuitive logics’ [2], [3], [4] and [5]. Here, the creative credentials of the process are assessed by comparison with the creativity definition and nature of the creative process illustrated in section one. The third section examines the scenario process stages in detail and explores the potential dysfunctions of the creative aspects of the individual stages and of the process as a whole. The concluding section reflects on the impact of this ‘darkness’ and offers suggestions for process improvement.

This paper has sought to investigate the dysfunctional effects of creativity in a heuristic SPP. After identifying definitions of creativity and the creative process from the areas of social psychology and the cultural industries, we asked whether the SPP was a creative process. Using comparative analysis, it was argued that the SPP passed the criteria and content for a creative process. Further, using the SPP as a vehicle, the paper identified areas where its creativity could have dysfunctional effects, in particular in the areas of creativity versus fantasy, expectations and confusion, pride and passion and excess. Trade-offs for creativity with greater numbers of scenarios and effective strategy translations and for creativity and surprise and logical consistency were revealed. Clearly creativity does not live in isolation from the context or content of a strategy process and the SPP is no exception. These factors imbue each process with a unique mix of perceptions, belief systems, urgencies and power battles. So the extent of the dysfunctional aspects of creativity will be contingent upon these ‘shaping’ factors. For many, the presence of creativity will be both necessary and virtuous, shedding new light on ways of seeing and doing things. For others, its dysfunctional effects may be great enough to render it neutral at best and harmful at worst. For a heuristic based SPP, our analysis points to four options: (a) Accept the creativity of this type of SPP as it informs the strategy or policy process and the dysfunctional effects that can accompany it, managing their implications as described in Table 3. This approach requires ‘innovation within’ the existing SPP (as illustrated in Fig. 3 and Table 3) with the expectation that such correcting factors may limit the degree of dysfunction through amelioration and produce a creative, yet robust, outcome. Accept that the majority of SPPs are derived from a common family and that there will always be a potential for creativity-driven dysfunction to damage the process and outcome. This approach reflects a ‘status quo’ option and assumes that any correcting factors will fail to ameliorate the potential excesses of creativity and so the extra effort and design required incorporating them into the SPP is unjustified. (c) Conduct a major re-engineering of the heuristic SPP from first principles (e.g., by addressing the complexities of the modern world with a focus on the design of efficient, short run scenarios capable of fast metamorphosis for the next brief time period) or fortify the existing SPP with other approaches to building scenarios (e.g., with the methodologies of the French La Prospective School [25] and [44] and footnote, p. 13 above) to produce a new variety of foresight tool. These approaches would require conclusive proof that the dysfunctional elements were so great as to be incapable of amelioration and would negate any practical utility for the outcomes of the existing SPP. At present, that conclusive proof is itself ‘prospective’. (d) Accept the need to reject a heuristic based SPP as a foresight tool and attempt to deal with increasing complexity by falling back on more traditional forecasting based options, e.g., quantitative based systems models. This stark approach accepts fully the need to reject the role that ‘intuitive logics’ or ‘disciplined imagination’ can play in the foresight projects. The internal messiness of these processes may not be capable of making sense of the external messiness for which they were designed. From its increasing popularity among organisations and agencies, it appears that the use of a heuristic SPP has delivered greater benefits than disruptions. Moreover, these are early days in the investigation of the potential dysfunctional aspects of creativity in the heuristic SPP. Hence, leaving the current SPP (Fig. 3) in tact (b) or innovating within it (Table 3) (c) would seem to be better choices than either an immediate rejection (d) or a major re-engineering or fortification project (c) as far as productivity in foresight studies goes. Embracing creativity at the heart of the heuristic SPP accepts that all creative acts have the potential for dysfunctional consequences and these may have to be managed better in a refined SPP than they have been in the past. The definition of scenario planning in this study (op cit) emphasised its use as an intervention in the field of strategic management, the provider of plausible future states and the practical means of providing for them. Its power as an intervention tool is strengthened by awareness of potential dysfunctions embedded within its design and the danger signals that should indicate whether corrective treatment might be required. As the provider of maps of how the future terrain might look, counterbalancing innovations within its existing process should ameliorate any excesses of embedded creativity and allow the preservation of the essential plausibility of those maps. As a foresight tool that informs strategy and policy in a practical way its capability is improved through innovations in the process that keep grounded rather than airborne.