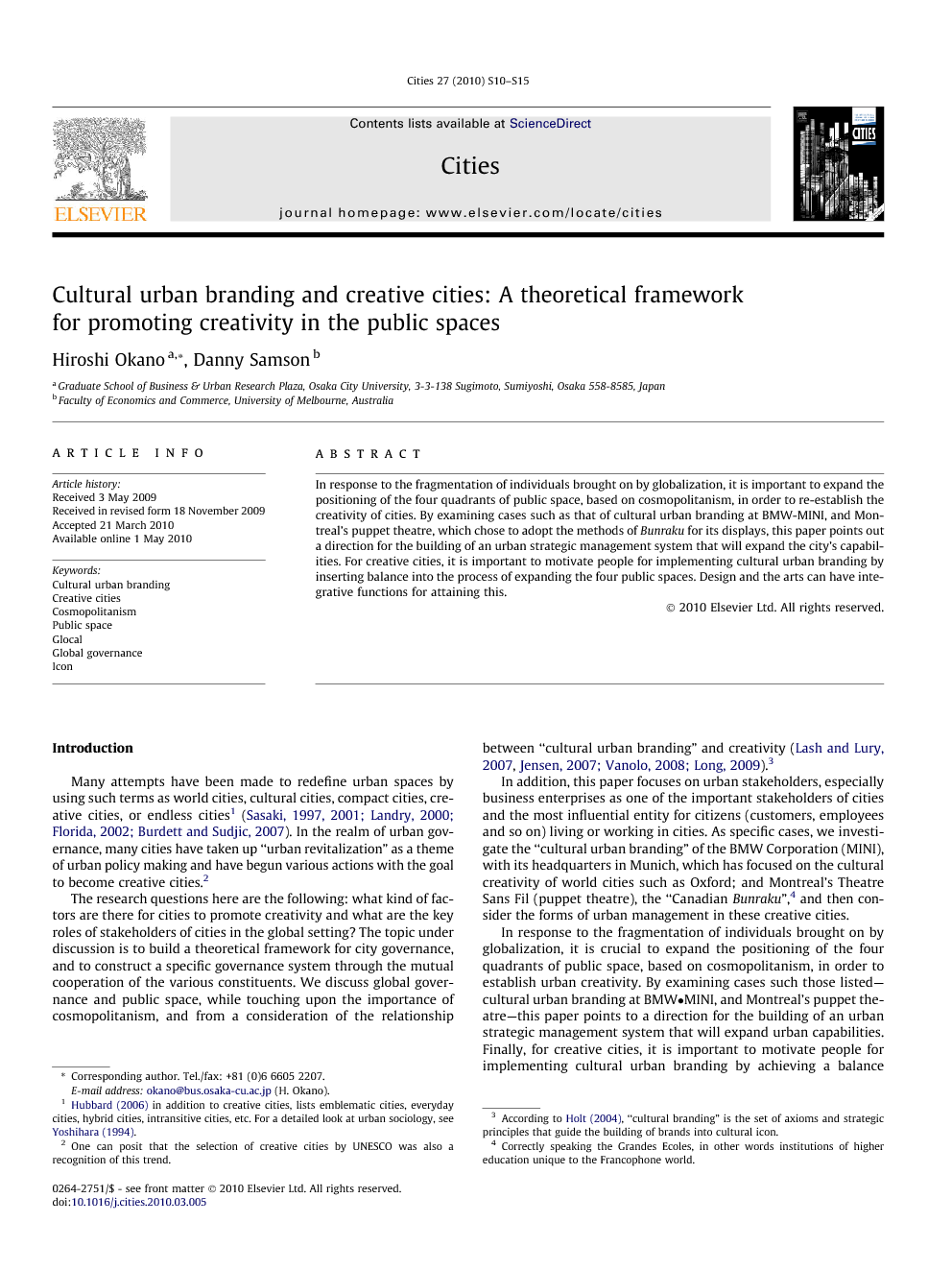 In response to the fragmentation of individuals brought on by globalization, it is important to expand the positioning of the four quadrants of public space, based on cosmopolitanism, in order to re-establish the creativity of cities. By examining cases such as that of cultural urban branding at BMW-MINI, and Montreal’s puppet theatre, which chose to adopt the methods of Bunraku for its displays, this paper points out a direction for the building of an urban strategic management system that will expand the city’s capabilities. For creative cities, it is important to motivate people for implementing cultural urban branding by inserting balance into the process of expanding the four public spaces. Design and the arts can have integrative functions for attaining this.

Many attempts have been made to redefine urban spaces by using such terms as world cities, cultural cities, compact cities, creative cities, or endless cities1 (Sasaki, 1997, Sasaki, 2001, Landry, 2000, Florida, 2002 and Burdett and Sudjic, 2007). In the realm of urban governance, many cities have taken up “urban revitalization” as a theme of urban policy making and have begun various actions with the goal to become creative cities.2 The research questions here are the following: what kind of factors are there for cities to promote creativity and what are the key roles of stakeholders of cities in the global setting? The topic under discussion is to build a theoretical framework for city governance, and to construct a specific governance system through the mutual cooperation of the various constituents. We discuss global governance and public space, while touching upon the importance of cosmopolitanism, and from a consideration of the relationship between “cultural urban branding” and creativity (Lash and Lury, 2007, Jensen, 2007, Vanolo, 2008 and Long, 2009).3 In addition, this paper focuses on urban stakeholders, especially business enterprises as one of the important stakeholders of cities and the most influential entity for citizens (customers, employees and so on) living or working in cities. As specific cases, we investigate the “cultural urban branding” of the BMW Corporation (MINI), with its headquarters in Munich, which has focused on the cultural creativity of world cities such as Oxford; and Montreal’s Theatre Sans Fil (puppet theatre), the “Canadian Bunraku”,4 and then consider the forms of urban management in these creative cities. In response to the fragmentation of individuals brought on by globalization, it is crucial to expand the positioning of the four quadrants of public space, based on cosmopolitanism, in order to establish urban creativity. By examining cases such those listed—cultural urban branding at BMW•MINI, and Montreal’s puppet theatre—this paper points to a direction for the building of an urban strategic management system that will expand urban capabilities. Finally, for creative cities, it is important to motivate people for implementing cultural urban branding by achieving a balance among the process of the four public spaces. Design and arts could have integrative functions for attaining this.

From the considerations above, the following points become clear: in response to the fragmentation of individuals brought on by globalization, it is vital to expand the positioning of the four quadrants of public space based on cosmopolitanism rather than the compromise means of the “glocal”. Additionally, we emphasized the need for escaping from traditional top-down governance and practicing society-level governance by a multiplicity of stakeholders. Moreover, by examining cases such as the BMW•MINI cultural urban branding as an example of cross-cultural collaboration, the city of Munich which has issued an Integrated Strategic Concept that strikes a balance among various problems on a societal level, and Montreal’s puppet theatre which chose to adopt the methods of bunraku for its manipulation of puppets, we have pointed out a direction for the building of an urban strategic management system that will expand the city’s capabilities and tolerance, incorporating a city’ social sustainability, embracing social inclusion, dynamic learning ability and smartness, and a vision that balances points of dispute. Finally, in designing creative cities, how to build the trust that will motivate people is imperative, and even in analyzing dynamic capability, it can only be achieved by focusing on this. Just as BMW has placed its focus on the people who live in the city, we need a management system that guarantees the tolerance, balance, and smartness that cities by their nature should have. What implications do these new ways of conceptualizing cities bring to existing city governments in considering their governance processes? How can concepts be manifested in existing cities which are often managed and governed in a top down manner? What lessons can be learned and generalized from Osaka, Oxford, Munich and Montreal to other cities? Perhaps the first is of moving from a top-down approach of governance to one of consulting and balancing the desires and needs of various stakeholder groups. The branding for a city, often expressed as a “strategic plan”, cannot be effectively implemented against the wishes of key stakeholder groups in free societies. Hence a “best practices” approach would seek their input and deep involvement in formulation of such strategies and governance rules. Second, the examples used in this article point to different forms of design excellence and societal value created via arts and design. These are seen by most humans as intrinsic goods. The design excellence that makes Apple’s products attractive also applies to the MINI, the puppet theatre, and hence the cities that they are connected with. Hence a practical implication for city managers and stakeholder groups is to find a focus which distinguishes an urban area or region, a city, in some way that attracts stakeholders to that theme. Such a theme will be successful if it incorporates the balances referred to in this article, and the properties of smartness and tolerance in addition. A city without such a theme or themes is doomed to mediocrity, and will essentially be more like a bland, commodity-like space than a vibrant, exciting and attractive place to live and visit. The third insight is the process that guarantees a successful inclusive theme, that is balanced, smart and tolerant, bringing quality of life value to all stakeholders. What types of governance will be most effective in achieving these properties? What levels of general education and representation are necessary to such outcomes? Again while no single system will likely be universal, we would argue for balance, smartness and tolerance as follows. Balance is needed in the sense of city representatives and balancing the requirements of stakeholders, while achieving a focused outcome. City strategies need to be a balance between top-down strategies and bottom-up inputs, and indeed the “sweet-spot” of cities, just like other organizations occurs when these two forces are not opposing but are aligned. Smartness is indispensable to achieve good solutions to complex problems such as city design and operation which overcomes many natural problems. While arts and design are fine themes which can appeal to citizens’ sense of value on a high level of Maslow’s hierarchy, city governance must also be mindful of all lower levels which must be satisfied. So the design and arts themes must be value-creating where possible, or else they will consume resources and be in conflict with other needs. The MINI factory creates wealth for Oxford, as does the Montreal puppet theatre for that region. Tolerance is needed for a range of personal and group desires which are diverse. Themes cannot be exhaustive, or even too dominant, or they will lead to exclusion and hence become limitations themselves. This brings the debate full circle back to the property of balance!