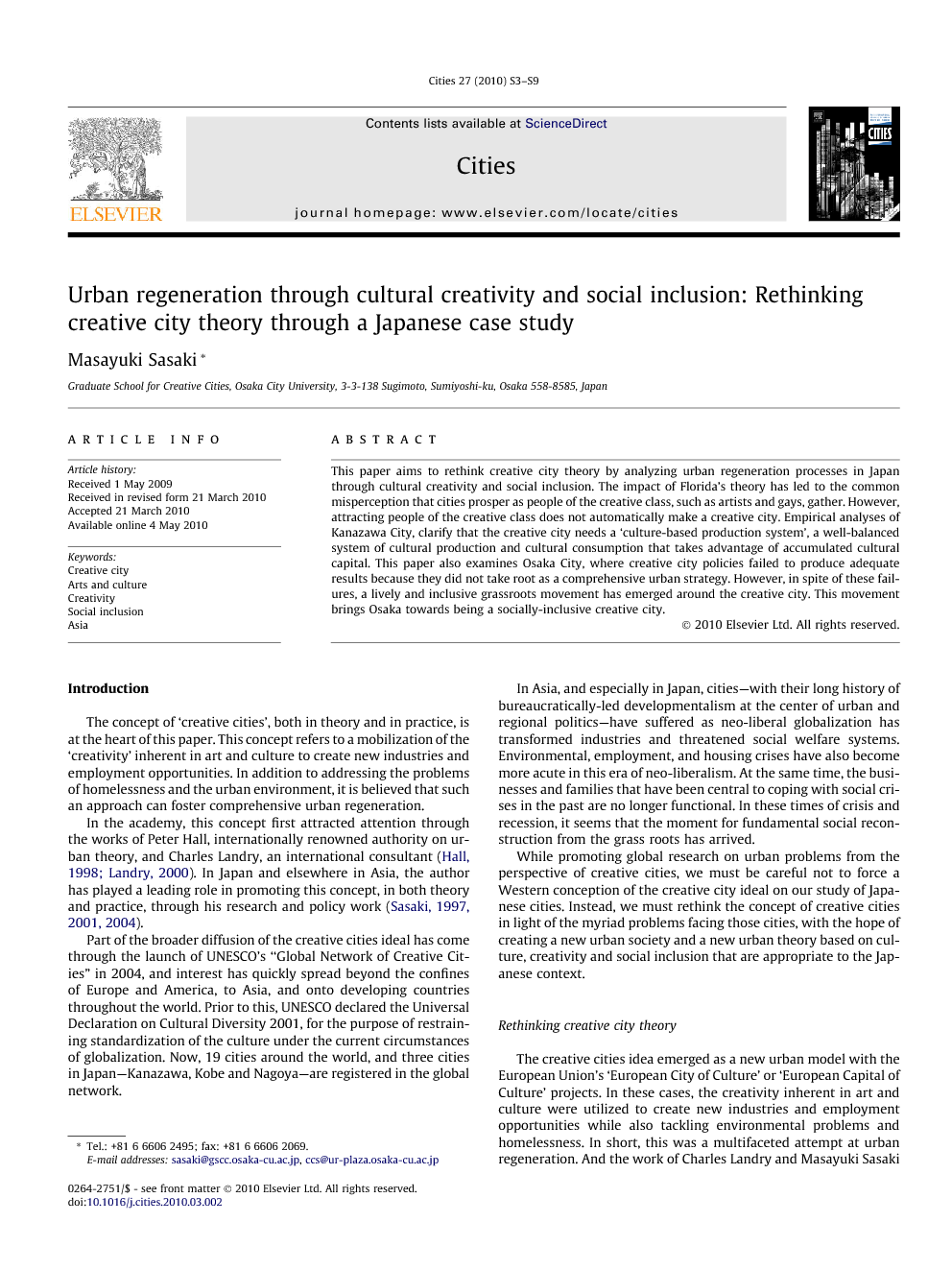 The concept of ‘creative cities’, both in theory and in practice, is at the heart of this paper. This concept refers to a mobilization of the ‘creativity’ inherent in art and culture to create new industries and employment opportunities. In addition to addressing the problems of homelessness and the urban environment, it is believed that such an approach can foster comprehensive urban regeneration. In the academy, this concept first attracted attention through the works of Peter Hall, internationally renowned authority on urban theory, and Charles Landry, an international consultant (Hall, 1998 and Landry, 2000). In Japan and elsewhere in Asia, the author has played a leading role in promoting this concept, in both theory and practice, through his research and policy work (Sasaki, 1997, Sasaki, 2001 and Sasaki, 2004). Part of the broader diffusion of the creative cities ideal has come through the launch of UNESCO’s “Global Network of Creative Cities” in 2004, and interest has quickly spread beyond the confines of Europe and America, to Asia, and onto developing countries throughout the world. Prior to this, UNESCO declared the Universal Declaration on Cultural Diversity 2001, for the purpose of restraining standardization of the culture under the current circumstances of globalization. Now, 19 cities around the world, and three cities in Japan—Kanazawa, Kobe and Nagoya—are registered in the global network. In Asia, and especially in Japan, cities—with their long history of bureaucratically-led developmentalism at the center of urban and regional politics—have suffered as neo-liberal globalization has transformed industries and threatened social welfare systems. Environmental, employment, and housing crises have also become more acute in this era of neo-liberalism. At the same time, the businesses and families that have been central to coping with social crises in the past are no longer functional. In these times of crisis and recession, it seems that the moment for fundamental social reconstruction from the grass roots has arrived. While promoting global research on urban problems from the perspective of creative cities, we must be careful not to force a Western conception of the creative city ideal on our study of Japanese cities. Instead, we must rethink the concept of creative cities in light of the myriad problems facing those cities, with the hope of creating a new urban society and a new urban theory based on culture, creativity and social inclusion that are appropriate to the Japanese context.

We can summarize some policy implications through the above case study of Japanese creative cities. First, it is necessary to conduct an intensive analysis of the embedded culture of the city, increase the shared awareness of fusing contemporary arts with traditional culture, clarify the need to become a “creative city,” and elaborate a creative city concept for the future, with an understanding of the historical context of the city. Second, in developing concepts, “artistic and cultural creativity” must be recognized as factors that have an impact on many other areas, including industry, employment, social welfare, education, medical care, and the environment. In order to link cultural policy to industrial policy, urban planning, and welfare policy, the vertical administrative structure must be made horizontal, ordinary bureaucratic thinking must be eliminated, and organizational culture must be changed. Third, art and culture must be recognized as central social infrastructures in the knowledge and informational society, and systematic planning must be carried out to bring out the creativity of the city’s people. Specifically, diverse “creative milieus” and “spaces for industrial and cultural creation” must be established in the city and creative producers must be fostered to take charge of this task. Fourth, promotion of creative policy cannot be continued effectively if it is limited to the city’s government. It is essential to obtain the cooperation of a broad selection of citizens, including business leaders and NPOs, perhaps in the form of a Creative City Promotion Council. The most important thing for the promotion of creative cities is the establishment of research and educational programs for developing the necessary human resources. Developments in the creative cities field in Japan in the midst of worldwide crises and drastic social and economic restructuring suggest some new issues to consider in the field of creative cities theory. One issue to consider is the movement away from a mass production industrial society toward a creative society of cultural-based production, where cultural value and economic value are united. A related issue is the high level of cultural diversity required for this social transformation. Furthermore, with regard to cities in Asia with their shared history of large scale heavy industries at the heart of economic development policies, we must consider the necessary transition toward more compact cities. At the same time, we must also come to understand, appreciate, and preserve the tangible and intangible cultural capital inherent in the traditional urban culture of each individual city. A second issue to consider is the need to face the problem of social exclusion directly, and provide the social infrastructure, including real and diverse ‘places of creativity,’ to foster and ensure the active participation of the citizenry in urban policy. The need to create a social system that respects and promotes both individuality and creativity to the utmost degree is vital to the success of tackling both of the issues enumerated above. Building an educational and industrial system that fosters and promotes creativity will be central to the construction of businesses that equally regard cultural, social, and economic value. In addition, the reconstruction of urban space is a subject that is closely related to these issues.