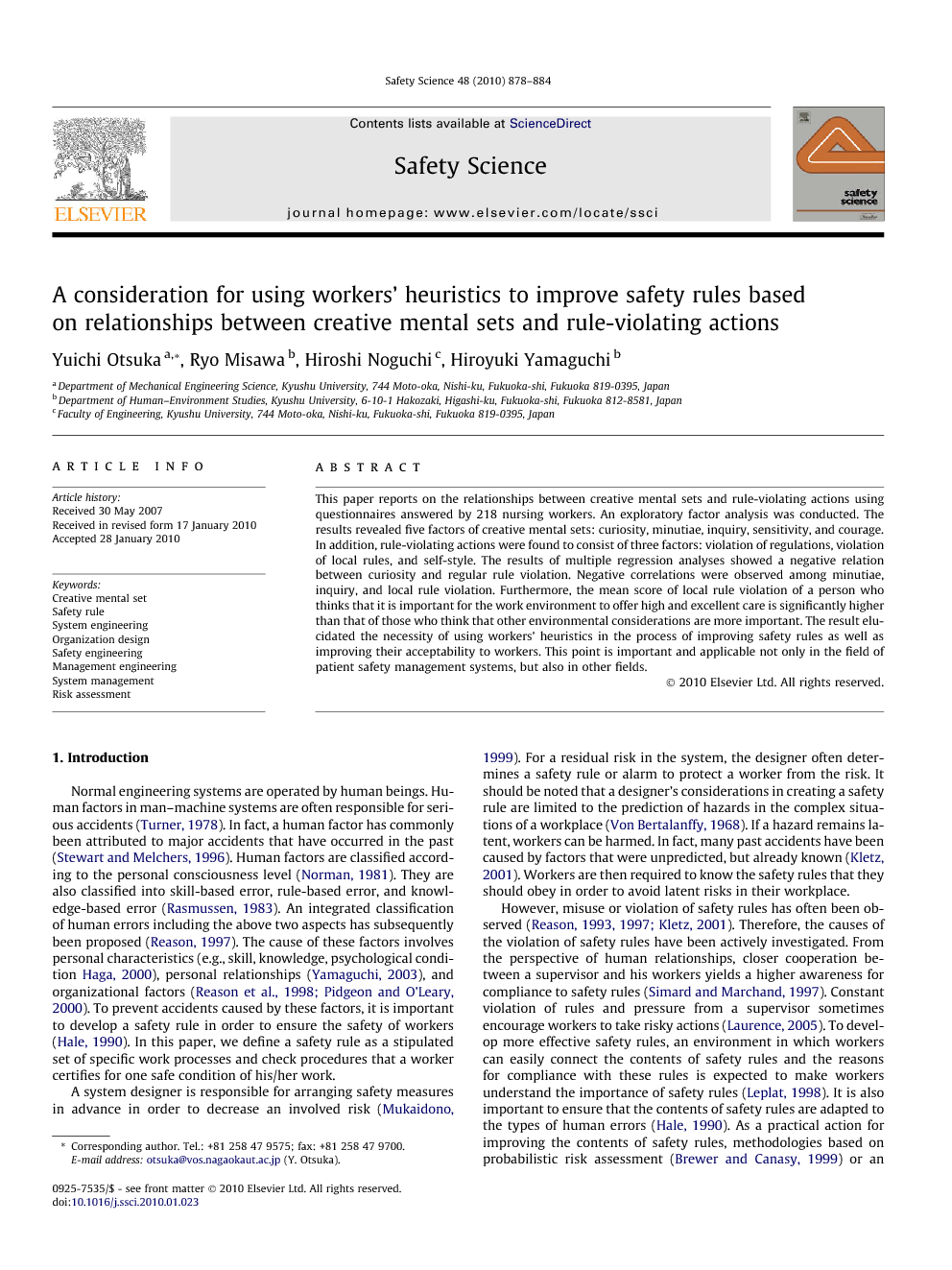 This paper reports on the relationships between creative mental sets and rule-violating actions using questionnaires answered by 218 nursing workers. An exploratory factor analysis was conducted. The results revealed five factors of creative mental sets: curiosity, minutiae, inquiry, sensitivity, and courage. In addition, rule-violating actions were found to consist of three factors: violation of regulations, violation of local rules, and self-style. The results of multiple regression analyses showed a negative relation between curiosity and regular rule violation. Negative correlations were observed among minutiae, inquiry, and local rule violation. Furthermore, the mean score of local rule violation of a person who thinks that it is important for the work environment to offer high and excellent care is significantly higher than that of those who think that other environmental considerations are more important. The result elucidated the necessity of using workers’ heuristics in the process of improving safety rules as well as improving their acceptability to workers. This point is important and applicable not only in the field of patient safety management systems, but also in other fields.

Normal engineering systems are operated by human beings. Human factors in man–machine systems are often responsible for serious accidents (Turner, 1978). In fact, a human factor has commonly been attributed to major accidents that have occurred in the past (Stewart and Melchers, 1996). Human factors are classified according to the personal consciousness level (Norman, 1981). They are also classified into skill-based error, rule-based error, and knowledge-based error (Rasmussen, 1983). An integrated classification of human errors including the above two aspects has subsequently been proposed (Reason, 1997). The cause of these factors involves personal characteristics (e.g., skill, knowledge, psychological condition Haga, 2000), personal relationships (Yamaguchi, 2003), and organizational factors (Reason et al., 1998 and Pidgeon and O’Leary, 2000). To prevent accidents caused by these factors, it is important to develop a safety rule in order to ensure the safety of workers (Hale, 1990). In this paper, we define a safety rule as a stipulated set of specific work processes and check procedures that a worker certifies for one safe condition of his/her work. A system designer is responsible for arranging safety measures in advance in order to decrease an involved risk (Mukaidono, 1999). For a residual risk in the system, the designer often determines a safety rule or alarm to protect a worker from the risk. It should be noted that a designer’s considerations in creating a safety rule are limited to the prediction of hazards in the complex situations of a workplace (Von Bertalanffy, 1968). If a hazard remains latent, workers can be harmed. In fact, many past accidents have been caused by factors that were unpredicted, but already known (Kletz, 2001). Workers are then required to know the safety rules that they should obey in order to avoid latent risks in their workplace. However, misuse or violation of safety rules has often been observed (Reason, 1993, Reason, 1997 and Kletz, 2001). Therefore, the causes of the violation of safety rules have been actively investigated. From the perspective of human relationships, closer cooperation between a supervisor and his workers yields a higher awareness for compliance to safety rules (Simard and Marchand, 1997). Constant violation of rules and pressure from a supervisor sometimes encourage workers to take risky actions (Laurence, 2005). To develop more effective safety rules, an environment in which workers can easily connect the contents of safety rules and the reasons for compliance with these rules is expected to make workers understand the importance of safety rules (Leplat, 1998). It is also important to ensure that the contents of safety rules are adapted to the types of human errors (Hale, 1990). As a practical action for improving the contents of safety rules, methodologies based on probabilistic risk assessment (Brewer and Canasy, 1999) or an established data base (Hale and Swuste, 1998) are proposed. Here, we can point out an unconsidered personal factor in previous researches that affects rule-violating actions. This factor is creativity (Onda, 1967). Humans often make an effort to avoid a severe workload (Fiske and Taylor, 1984). It is not irrational that the creative tendency of taking measures to solve problems (creative mental set) might cause rule violation (Aoyagi, 1980). We focus not on creativity itself, which is an essential mental ability, but an explicit mental set. Namely, a person who possesses a weak creative mental set is supposed to frequently violate safety rules by considering the temporary workload resulting from the observation of rules. On the other hand, a person with a strong mental set will follow safety rules by considering not only the workload, but the substantial effect of following the rules. In fact, a recent Japanese accident analysis reported that a worker “improved” a regulated rule to enhance its efficiency, and this modification was a critical cause of the accident (Sasou, 2002). Another research also showed that a person has a tendency to take risky actions when the action is more effective than a conventional one (Laurence, 2005). These preliminary results indicate a relationship between creative mental sets and rule-violating actions. In Japanese industrial safety management systems, managers often use workers’ proposals, which workers invent through creative thinking, for the purpose of improving safety rules. If creative mental sets promote risk-taking actions or rule violation, we can claim that such a practice adversely helps workers not to follow safety rules. This supposition immediately makes necessary an investigation to reveal whether the relationship will show a positive correlation or a negative one. The correlation can also highlight the usefulness of or the risk involved in using creative mental sets in the process of safety management activities. This research aims to investigate the relationships between creative mental sets and rule-violating actions using a questionnaire answered by nursing workers in a Japanese hospital. One of the reasons for targeting nursing workers is that they are supposed to possess a strict mental tendency against rule violation, because their errors may cause direct harm to patients or result in the patients’ death. Furthermore, a normalized result of this investigation can be applied to other safety management fields such as engineering design or manufacturing industries. The authors finally discuss the content of acceptable safety rules on the basis of the results of the investigation.

The authors conducted an investigation into the relationships between creative mental sets and the rule-violating actions of Japanese nursing workers in order to consider the contents of acceptable safety rules. The results can be summarized as follows: • The factor “Curiosity” in the creative mental set tends to suppress regular rule violation, and the factors “Minutiae” and ”Inquiry” in the creative mental set also tends to suppress local rule violation. • A group that chooses “A: High and excellent care” for the work environment has a tendency to promote local rule violation. • The points for making safety rules acceptable were considered on the basis of the observed correlation relationships. (1) It is important to introduce workers’ creative ideas and experiences in order to improve the contents of safety rules. (2) The rationalization of the contents of safety rules is also important so as to allow workers to consider “safety work” as the highest priority in the workplace. A lecture by safety managers in order to make workers understand the meaning of safety rules is necessary. • The above concept regulates acceptable relationships between the designers of safety rules and workers’ practices that are common to other safety management systems and applicable to other safety management fields.