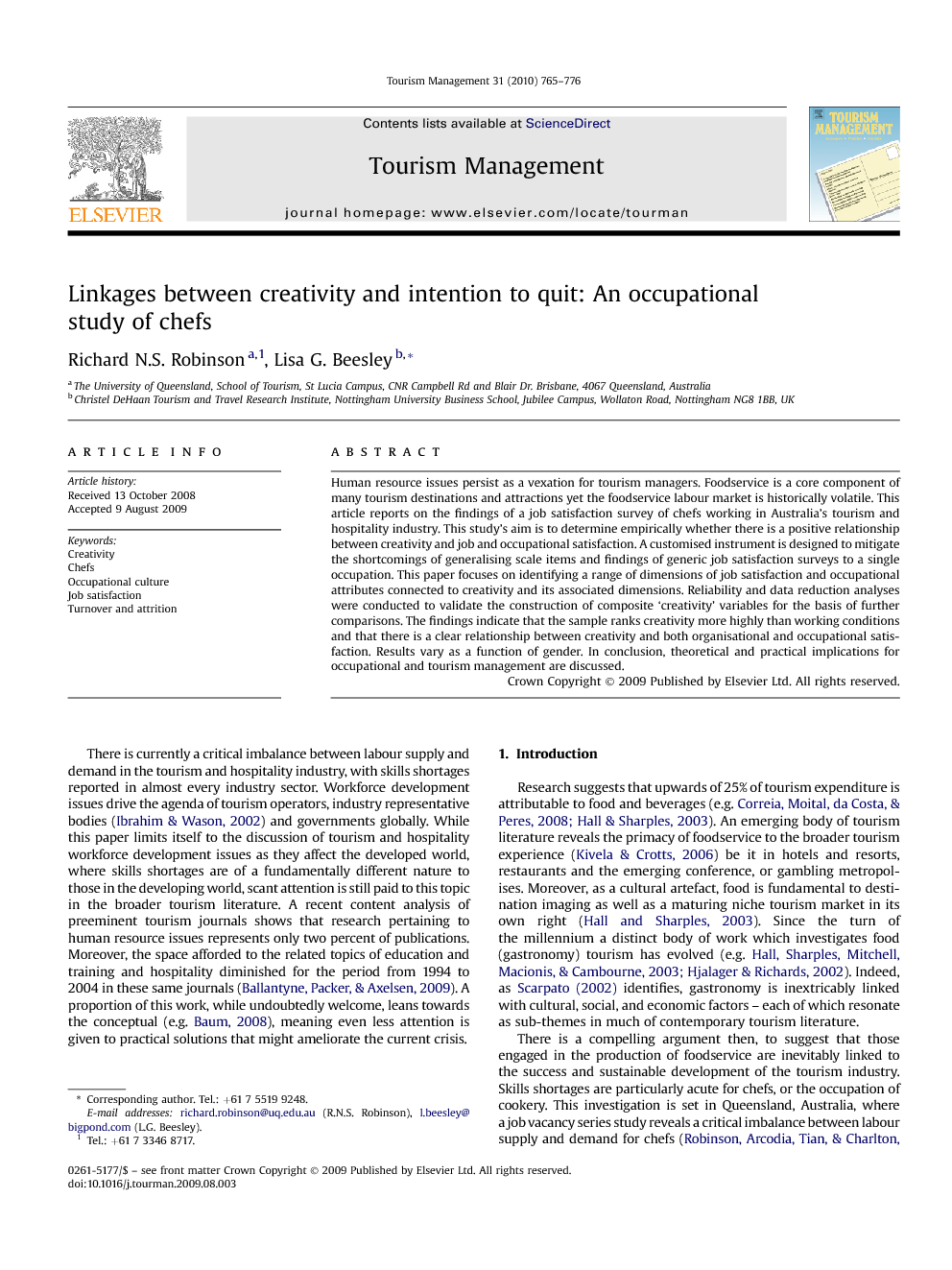 Human resource issues persist as a vexation for tourism managers. Foodservice is a core component of many tourism destinations and attractions yet the foodservice labour market is historically volatile. This article reports on the findings of a job satisfaction survey of chefs working in Australia's tourism and hospitality industry. This study's aim is to determine empirically whether there is a positive relationship between creativity and job and occupational satisfaction. A customised instrument is designed to mitigate the shortcomings of generalising scale items and findings of generic job satisfaction surveys to a single occupation. This paper focuses on identifying a range of dimensions of job satisfaction and occupational attributes connected to creativity and its associated dimensions. Reliability and data reduction analyses were conducted to validate the construction of composite ‘creativity’ variables for the basis of further comparisons. The findings indicate that the sample ranks creativity more highly than working conditions and that there is a clear relationship between creativity and both organisational and occupational satisfaction. Results vary as a function of gender. In conclusion, theoretical and practical implications for occupational and tourism management are discussed.

Research suggests that upwards of 25% of tourism expenditure is attributable to food and beverages (e.g. Correia et al., 2008 and Hall and Sharples, 2003). An emerging body of tourism literature reveals the primacy of foodservice to the broader tourism experience (Kivela & Crotts, 2006) be it in hotels and resorts, restaurants and the emerging conference, or gambling metropolises. Moreover, as a cultural artefact, food is fundamental to destination imaging as well as a maturing niche tourism market in its own right (Hall and Sharples, 2003). Since the turn of the millennium a distinct body of work which investigates food (gastronomy) tourism has evolved (e.g. Hall et al., 2003 and Hjalager and Richards, 2002). Indeed, as Scarpato (2002) identifies, gastronomy is inextricably linked with cultural, social, and economic factors – each of which resonate as sub-themes in much of contemporary tourism literature. There is a compelling argument then, to suggest that those engaged in the production of foodservice are inevitably linked to the success and sustainable development of the tourism industry. Skills shortages are particularly acute for chefs, or the occupation of cookery. This investigation is set in Queensland, Australia, where a job vacancy series study reveals a critical imbalance between labour supply and demand for chefs (Robinson, Arcodia, Tian, & Charlton, 2010). These shortages are accentuated by high turnover (intraoccupational) and attrition (interoccupational) rates (Cameron, 2001, Lee-Ross, 1999 and Pratten, 2003). Some commissioned research suggests the occupationally-specific annual turnover rate for chefs in Australia is as low as 20% (Deery, 2006) as compared to the national hospitality industry average of 50% (HospitalityMagazine.com.au, 2006). Perhaps more telling are data which reveal that up to 50% of cookery entrants leave the occupation before completion of apprenticeship and as many as 65% within 10 years (Casey, 2003). Skills shortages for the occupation of cookery have been on the Australian national agenda for at least the past decade (Department of Education, Training and Youth Affairs, 2001). Key to addressing the demand for chefs is arresting the high attrition rates. Queensland government data report that between 2000 and 2007 only 39% of apprenticeship commencements in commercial cookery were completed (Department of Training and the Arts, 2007) although other environmental factors need acknowledging. Apprenticeships in Australia, operating under a work-based learning model, have been subject to a complex political environment. This is manifest, for example, in problematic apprentice/employer relations, where the former aspires to be well-trained and the latter hankers after a good-value labour proposition. An archaic wage structure, the capacity of employers to effectively deliver training, the privatisation of the technical and further education sector where the cookery occupation's fundamentals are also taught and assessed and governments' ability to develop policy and legislate in these contested spaces (Cornford & Gunn, 1998) are among the issues conflagrating labour force tensions. Moreover, recent developments in domestic candidates seeking trade qualifications through recognition of prior learning (RPL) and the eligibility process for immigrants to gain residency visas have been the catalyst for the introduction of accelerated trade-recognition programs for cookery candidates, which circumvent the traditional apprenticeship trade-recognition pathway requirements. While RPL may assist in retaining previously unqualified candidates and, despite resident visa seeker enrolments for these programs increasing eight-fold between 2004 and 2008, there is little evidence that this is alleviating the chronic occupational skills shortages (Birrell, Healy, & Kinnaird, 2009). This is somewhat paradoxical especially during a period of sustained low unemployment (ABS, 2009). Despite the milieu in which the occupation of cookery functions, the previously cited figures regarding occupational turnover and attrition and apprenticeship incompletions would seem to imply a lack of job, or more pertinently, occupational commitment. Much research has provided a clear linkage between commitment and job and occupational satisfaction. To this point the predominant Marxian aetiology in hospitality research, as epitomised by Wood (1997), routinely cites poor working conditions as antecedents to occupational [dis]satisfaction, but since Maslow (1957) the human resource (HR) literature consistently shows intrinsic aspects of work also impact upon job satisfaction. Intrinsic needs relate to higher order human needs, such as self-respect, achievement, reputation, recognition, and realising one's potential. Clearly, creativity is linked to some of these constructs and has been considered in the management and HR literature from a number of perspectives and at organisational and occupational levels. Further to this, a rich vein of literature, beginning with Mobley (1977), has identified a positive relationship between job satisfaction and organisational commitment and occupational satisfaction and occupational commitment (Wright & Bonett, 1992). There is little in the literature however, that explores the relationships among creativity and intrinsic satisfaction and how they relate to organisational/occupational satisfaction in the occupation of cookery. The purpose of this paper is to present the findings of a study of southeast Queensland chefs, which investigated the relationship between creativity and organisational/occupational satisfaction. These findings are discussed in relation to existing theory, and in conclusion the practical implications are considered and recommendations are offered. For these implications and recommendations to be considered in context it is first necessary to present an overview of the relevant literatures.

This study shows that the intrinsic motivator of creativity consistently scored higher, across a range of demographic variables, than the extrinsic motivators of pay and working conditions, especially across the occupational selection and socialisation career phases. This finding adds to the previous literature (Cameron, 2001, Chivers, 1971, Drew, 1987, Fine, 1996 and Peterson and Birg, 1988) by showing that chefs do indeed perceive themselves to be creative, and that creativity continues to be a factor related to organisational/occupational satisfaction, and identity throughout their careers. Moreover, this study highlights three key areas that warrant further investigation. First, in the context of organisational satisfaction, what factors more or less impact upon the reduction in perceptions of creativity as it relates to the occupation of cookery during and after the socialisation phases of the career? Second, why is it that females scored consistently higher in scores of creativity, yet consistently demonstrated less intention to quit either the organisation, or the occupation, than did males? Finally, that respondents ranked the intrinsic construct of creativity consistently higher than extrinsic factors related to organisational/occupational satisfaction, regardless of gender, age group or individual career stage, demands greater attention than it has been paid in the past. If one accepts the premise that only so much can be done to ameliorate the working conditions and pay of hospitality workers (Wood, 1997), including chefs, then alternative motivators for job satisfaction need exploring, including intrinsic rewards. To do otherwise is to ignore the fundamentals of job satisfaction. It is well recognised that creativity is an important element in the contemporary organisation's success vis-à-vis innovation (Tan, 1998). Moreover, links have been made between employee creativity and job satisfaction within the tourism sector (Wong & Pang, 2003) and even a positive relationship between job requirement and reduced intention to quit (Shalley et al., 2000). That there is potential for employers of chefs to mitigate some of the organisationally negative effects of creativity amongst chefs (e.g Murray-Gibbons and Gibbons, 2007, Rowley and Purcell, 2001 and Zetie et al., 1994), and exploit the creativity construct to create a competitive organisational unit, whilst simultaneously improving job satisfaction and potentially reducing turnover is a tantalising prospect. As a result of this investigation there are additional findings that might contribute positively to the broader tourism ‘experience’. Foodservice research has predominantly focused on economic impacts or outcomes (Scarpato, 2002), either through catering systems or human resource management. What is evident through this research is that creativity can feature in human resource practices and when used as a management tool and optimally harnessed in the workplace, holds great potential to ameliorate the current trend of culinary globalisation, or as Symons (1999) describes it, a homogenised, commodified, ‘safe’ global food industry. Indeed, there is evidence of this in the mature branded restaurant and hotel restaurant sectors. Both the opportunity and ability of foodservice staff to practise creativity would assist in culinary regionalism, a phenomenon more conducive to tourism's ideals in sustainability, particularly in social and cultural terms. Thus, the authors invite further research into the creativity construct relative to the occupation of cookery, which may yield further interesting theoretical and practical applications. Investigating creativity, which contains dimensions with various antecedents and determinants (Unsworth et al., 2005), including creativity requirement in job description and design (Shalley et al., 2000), may highlight gaps between perceptions held towards the occupation of cookery and the reality of working within it. Work that continues to explore these initial findings with larger samples (not necessarily restricted to the tourism or hospitality sector, geographical region, or even occupational grouping) is recommended. Investigations could be further enhanced by utilising qualitative, as well as quantitative methodologies to identify factors that impact on the intrinsic construct of creativity and their relationship between organisational/occupational satisfaction and employee attrition.