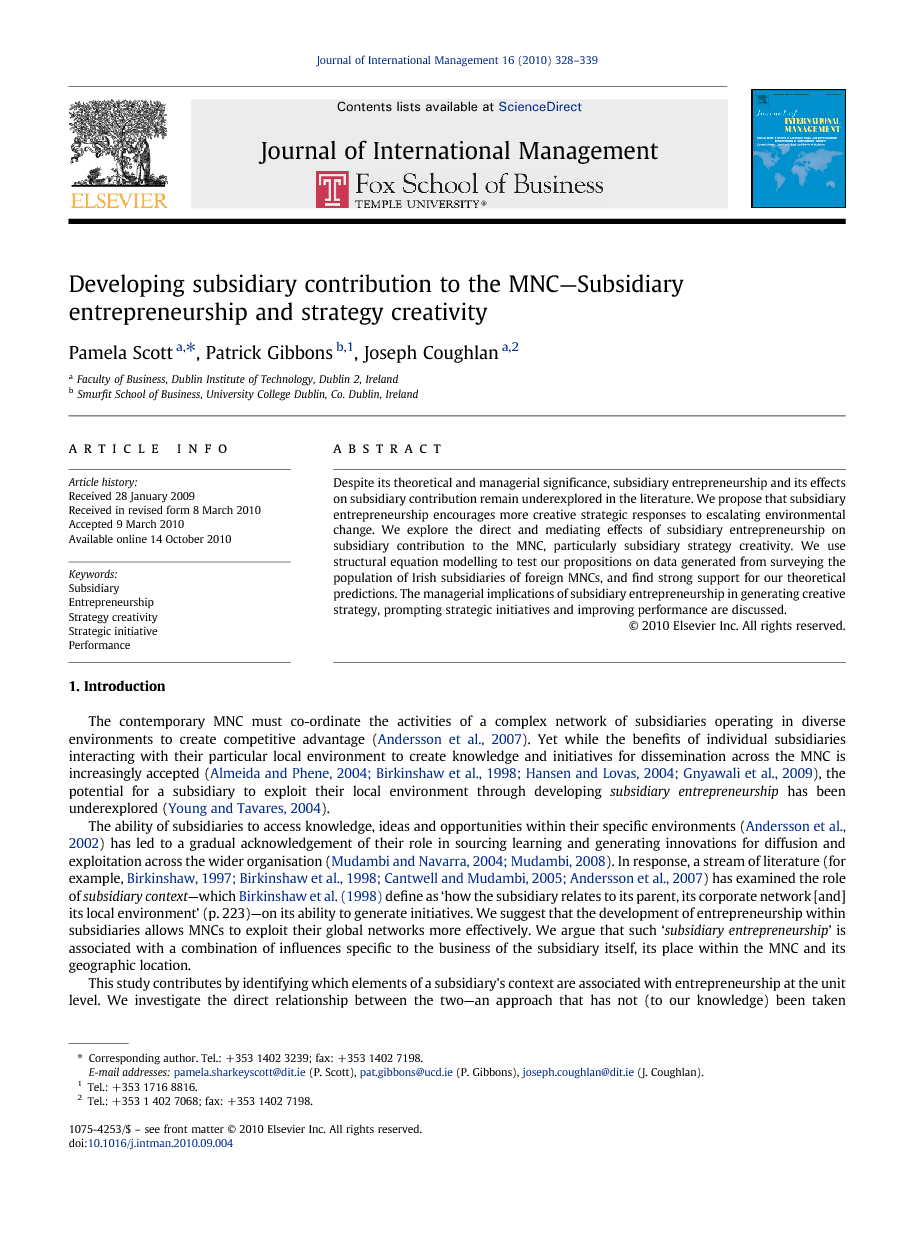 The contemporary MNC must co-ordinate the activities of a complex network of subsidiaries operating in diverse environments to create competitive advantage (Andersson et al., 2007). Yet while the benefits of individual subsidiaries interacting with their particular local environment to create knowledge and initiatives for dissemination across the MNC is increasingly accepted (Almeida and Phene, 2004, Birkinshaw et al., 1998, Hansen and Lovas, 2004 and Gnyawali et al., 2009), the potential for a subsidiary to exploit their local environment through developing subsidiary entrepreneurship has been underexplored (Young and Tavares, 2004). The ability of subsidiaries to access knowledge, ideas and opportunities within their specific environments (Andersson et al., 2002) has led to a gradual acknowledgement of their role in sourcing learning and generating innovations for diffusion and exploitation across the wider organisation (Mudambi and Navarra, 2004 and Mudambi, 2008). In response, a stream of literature (for example, Birkinshaw, 1997, Birkinshaw et al., 1998, Cantwell and Mudambi, 2005 and Andersson et al., 2007) has examined the role of subsidiary context—which Birkinshaw et al. (1998) define as ‘how the subsidiary relates to its parent, its corporate network [and] its local environment’ (p. 223)—on its ability to generate initiatives. We suggest that the development of entrepreneurship within subsidiaries allows MNCs to exploit their global networks more effectively. We argue that such ‘subsidiary entrepreneurship’ is associated with a combination of influences specific to the business of the subsidiary itself, its place within the MNC and its geographic location. This study contributes by identifying which elements of a subsidiary's context are associated with entrepreneurship at the unit level. We investigate the direct relationship between the two—an approach that has not (to our knowledge) been taken previously, despite increasing demands for organisations to generate creative strategic responses (Ford et al., 2008) to escalating environmental change. We then explore the mediating effects of entrepreneurship to gain deeper insights into how it amplifies the effect of subsidiary context on subsidiary contribution. Besides its potential for theory development, this area is particularly relevant to practitioners, as understanding how entrepreneurship influences subsidiaries' added value is critical to protecting their position within the MNC.