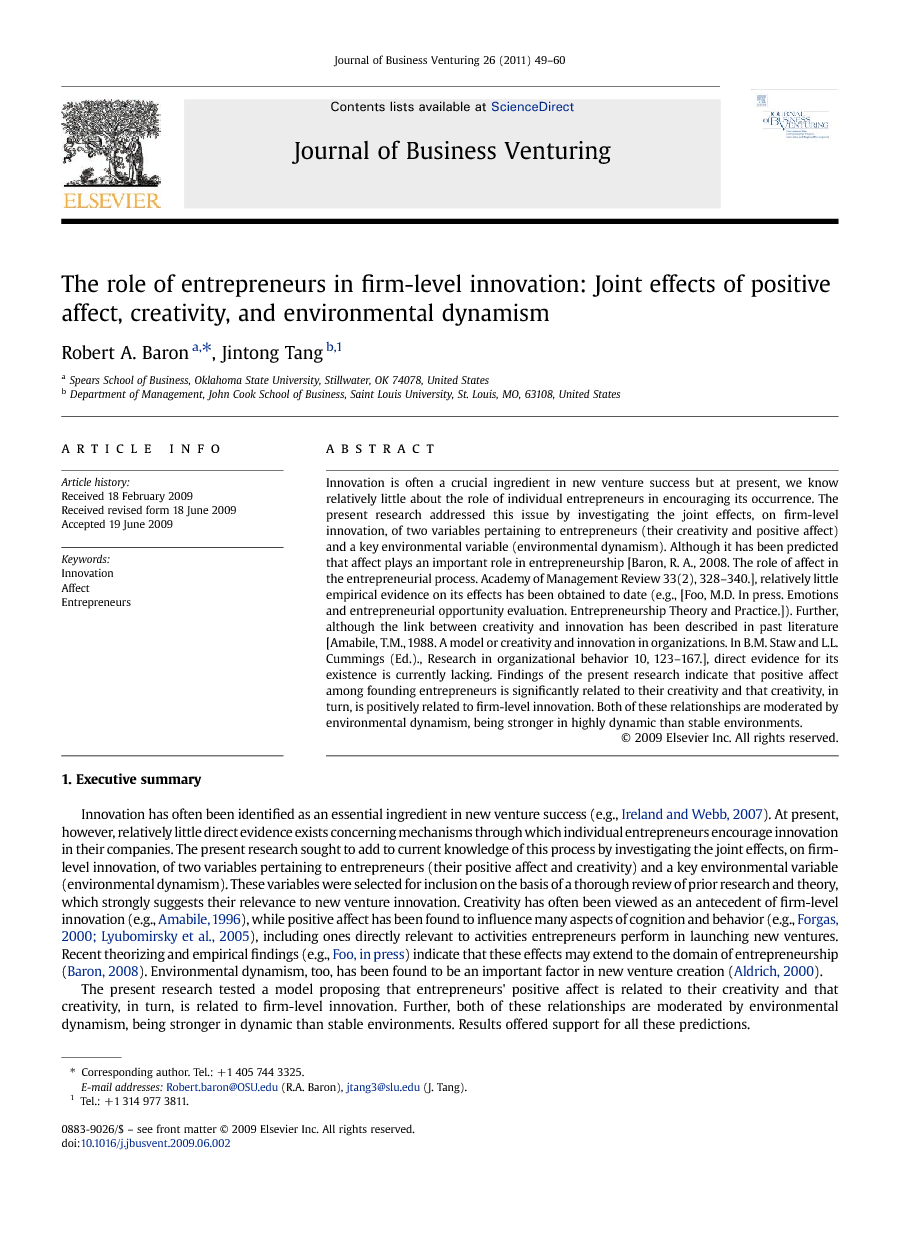 Innovation is often a crucial ingredient in new venture success but at present, we know relatively little about the role of individual entrepreneurs in encouraging its occurrence. The present research addressed this issue by investigating the joint effects, on firm-level innovation, of two variables pertaining to entrepreneurs (their creativity and positive affect) and a key environmental variable (environmental dynamism). Although it has been predicted that affect plays an important role in entrepreneurship [Baron, R. A., 2008. The role of affect in the entrepreneurial process. Academy of Management Review 33(2), 328–340.], relatively little empirical evidence on its effects has been obtained to date (e.g., [Foo, M.D. In press. Emotions and entrepreneurial opportunity evaluation. Entrepreneurship Theory and Practice.]). Further, although the link between creativity and innovation has been described in past literature [Amabile, T.M., 1988. A model or creativity and innovation in organizations. In B.M. Staw and L.L. Cummings (Ed.)., Research in organizational behavior 10, 123–167.], direct evidence for its existence is currently lacking. Findings of the present research indicate that positive affect among founding entrepreneurs is significantly related to their creativity and that creativity, in turn, is positively related to firm-level innovation. Both of these relationships are moderated by environmental dynamism, being stronger in highly dynamic than stable environments.

More than 40 years ago, Baumol (1968, p. 67) noted that: “Trying to understand entrepreneurship without the entrepreneur is like trying to understand Shakespeare without Hamlet.” Similarly, Shane et al. (2003, p.259) suggested: ‘The entrepreneurial process occurs because people act to pursue opportunities . . .” Comments such as these indicate that the field of entrepreneurship recognizes the important role of entrepreneurs in new venture creation. At the same time, however, the field focuses major attention on firm-level outcomes—the survival, growth, and profitability of new ventures. This dual focus raises an important question that has been noted by many researchers (e.g., Baron, 2007, Locke and Baum, 2006 and Shane et al., 2003): How do the characteristics and actions of individual entrepreneurs ultimately influence firm-level outcomes? This is a complex question, and addressing it fully will require the sophisticated multi-level research described by Hitt et al. (2007)—an approach that is increasingly apparent in current entrepreneurship research (e.g., Hmieleski and Baron, In press and Schindehutte and Morris, 2009). We attempt to contribute to this ongoing endeavor by investigating the joint effects on firm-level innovation, of two variables pertaining to entrepreneurs (creativity and positive affect) and a key environmental variable (environmental dynamism). Specifically, we investigate a model suggesting that entrepreneurs' positive affect is related to their level of creativity and that creativity, in turn, is related to firm-level innovation. The model further proposes that both of these relationships are moderated by environmental dynamism, being stronger in highly dynamic than in relatively stable environments. Consistent with literature in several different fields (e.g., Forgas, 2000 and Lyubomirsky et al., 2005), we define affect as referring to a broad range of subjective feeling states. Thus, affect encompasses both moods, which are often relatively long-lasting in nature but not focused on specific events or objects (e.g., cheerfulness, depression), and emotions (e.g., anger, sorrow, joy) which are often shorter in duration and are more specifically directed toward a particular object (e.g., a person, object, event; Frijda, 1993). Affect refers both to relatively stable, cross-situational tendencies to experience specific subjective feelings (i.e., dispositional affect) and to temporary shifts in such feelings generated by specific events (i.e., state or event-generated affect). We suggest that since innovation is a continuing process, it is more likely to reflect stable affective dispositions on the part of entrepreneurs than fleeting or temporary affective reactions to specific events. Thus, we focus on stable, dispositional affect in the present research. It is important to note, however, that although dispositional and state affect derive from different sources (biological processes and perhaps genetic influences on the one hand versus discrete external events on the other), a substantial body of research indicates that they produce parallel effects in many situations (see Lyubomirsky et al., 2005, for a detailed review). Thus, although the distinction between dispositional and state affect is important, one key goal of the present research (investigating the role of affect in creativity and firm-level innovation), we suggest that focusing on relatively stable (i.e., dispositional) affect is appropriate. The present study offers several contributions. First, and most generally, it seeks to contribute to current efforts to relate the characteristics of individual entrepreneurs to important firm-level outcomes. Clarifying the mechanisms through which individual entrepreneurs influence firm-level outcomes such as innovation is an essential task if the field of entrepreneurship is to attain full understanding of the new venture creation process. Second, this research provides empirical evidence on the role of positive affect in entrepreneurship. Such a role has been predicted on the basis of existing theory and research (Baron, 2008 and Lyubomirsky et al., 2005), but has only recently become a subject of ongoing research in the field of entrepreneurship (e.g., Foo, In press and Foo et al., 2009). In the present research, potential relationships between positive affect and important aspects of new venture creation are empirically examined. Affect has been found to exert strong and consistent effects on many important organizational processes, ranging from performance appraisals, job interviews, and organizational citizenship, to actual task performance (e.g., Brief and Weiss, 2002 and Isen and Labroo, 2003). Further, it has been suggested (Baron, 2008 and Mitchell et al., 2007,) that affect may have especially strong effects in the domain of entrepreneurship for two important reasons. First, the environments in which entrepreneurs operate are often highly unpredictable and replete with rapid change. Research on the influence of affect indicates that it is precisely in such environments that it exerts its strongest effects on cognition and behavior (e.g., Forgas, 2000 and Forgas and Smith, 2007). Second, affect has been shown to strongly influence several tasks entrepreneurs perform in launching and operating new ventures—decision making and judgment, forming productive working relationships with others, persuasion, and eliciting high levels of enthusiasm in others (e.g., Diener and Seligman, 2002 and Forgas, 2000). These considerations, plus growing empirical evidence for the important role of affect in the entrepreneurial process (e.g., Foo, in press), strongly suggest the usefulness of further investigations designed to clarify the potential role of affect in key aspects of entrepreneurship. The present research also offers new insights into the potential link between entrepreneurs' creativity and innovation by new ventures. Such a relationship has been suggested by many researchers (e.g., Shane, 2003), but here this relationship is investigated directly. Finally, by including environmental dynamism as a moderating variable, the present research reflects recommendations by Hitt et al. (2007) to apply a multi-level approach to efforts to understand complex organizational phenomena. This approach has already gained growing use in several branches of management (e.g., Korsgaard et al., 2008) but has only recently been adopted in entrepreneurship research (e.g., Schindehutte and Morris, 2009). We believe that the moderated mediation model proposed here represents a useful application of this approach to acquiring insights into key aspects of entrepreneurship. Next, we describe the theoretical and empirical foundations of this model and derive specific, testable propositions from it.

Despite these limitations, the present findings offer several useful contributions. First, they help clarify the potential role of affect in entrepreneurship. As noted earlier, such a role has been predicted, but to date, only a small number of studies have examined such effects (e.g., Foo, In press and Foo et al., 2009). Second, the present results provide empirical evidence for a link between creativity and innovation. Such a link has often been suggested in past literature (Amabile, 1988), but at present, relatively little direct evidence for it exists. Second, the present findings add to our understanding of the complex processes through which individual-level variables such as creativity and positive affect ultimately influence organizational-level outcomes such as innovation. Attaining greater understanding of these processes t has been identified as an important task by many researchers in the field of entrepreneurship (e.g., Baum and Locke, 2004). The present findings contribute to progress on this task by suggesting mechanisms through which two important individual-level variables—positive affect and creativity—can influence important activities by new ventures. From a more general perspective, results serve to provide a more balanced view of the potential influence of positive affect than extant literature in several different fields has sometimes suggested. In the past, positive affect has frequently been viewed primarily as a source of error or bias—a factor that interferes with basic cognitive processes such as judgment and decision making and hence exerts detrimental effects on important organizational processes (e.g., Brief and Weiss, 2002 and Isen and Baron, 1991). More recent findings, however, indicate that affect—and especially positive affect—may confer important benefits on the persons who experience it. For instance, on the basis of an extensive review of existing evidence, Lyubomirsky et al. (2005: 804) conclude that: “People who experience a preponderance of positive emotions tend to be successful and accomplished across multiple life domains…not merely because success leads to happiness, but because positive affect engenders success…” (Italics added.) The present findings extend these conclusions to the realm of entrepreneurship, suggesting that positive affect among entrepreneurs may encourage creativity and, indirectly, firm-level innovation. Since innovation, in turn, is often a key ingredient in new venture success, the tendency to experience positive feelings or emotions frequently, and in a wide range of contexts, may indeed confer important advantages on entrepreneurs and the new ventures they launch.