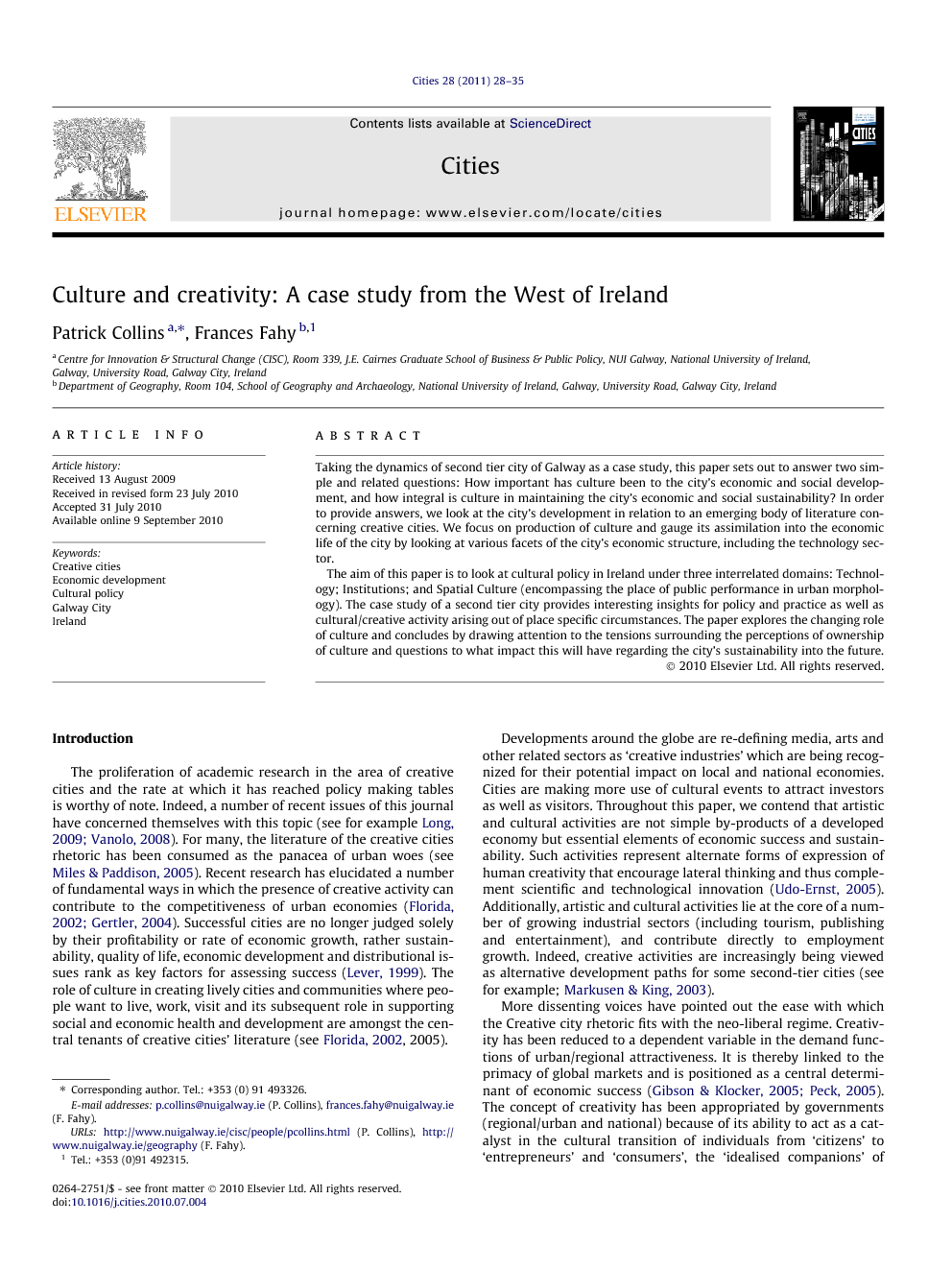 Taking the dynamics of second tier city of Galway as a case study, this paper sets out to answer two simple and related questions: How important has culture been to the city’s economic and social development, and how integral is culture in maintaining the city’s economic and social sustainability? In order to provide answers, we look at the city’s development in relation to an emerging body of literature concerning creative cities. We focus on production of culture and gauge its assimilation into the economic life of the city by looking at various facets of the city’s economic structure, including the technology sector. The aim of this paper is to look at cultural policy in Ireland under three interrelated domains: Technology; Institutions; and Spatial Culture (encompassing the place of public performance in urban morphology). The case study of a second tier city provides interesting insights for policy and practice as well as cultural/creative activity arising out of place specific circumstances. The paper explores the changing role of culture and concludes by drawing attention to the tensions surrounding the perceptions of ownership of culture and questions to what impact this will have regarding the city’s sustainability into the future.

The proliferation of academic research in the area of creative cities and the rate at which it has reached policy making tables is worthy of note. Indeed, a number of recent issues of this journal have concerned themselves with this topic (see for example Long, 2009 and Vanolo, 2008). For many, the literature of the creative cities rhetoric has been consumed as the panacea of urban woes (see Miles & Paddison, 2005). Recent research has elucidated a number of fundamental ways in which the presence of creative activity can contribute to the competitiveness of urban economies (Florida, 2002 and Gertler, 2004). Successful cities are no longer judged solely by their profitability or rate of economic growth, rather sustainability, quality of life, economic development and distributional issues rank as key factors for assessing success (Lever, 1999). The role of culture in creating lively cities and communities where people want to live, work, visit and its subsequent role in supporting social and economic health and development are amongst the central tenants of creative cities’ literature (see Florida, 2002, 2005). Developments around the globe are re-defining media, arts and other related sectors as ‘creative industries’ which are being recognized for their potential impact on local and national economies. Cities are making more use of cultural events to attract investors as well as visitors. Throughout this paper, we contend that artistic and cultural activities are not simple by-products of a developed economy but essential elements of economic success and sustainability. Such activities represent alternate forms of expression of human creativity that encourage lateral thinking and thus complement scientific and technological innovation (Udo-Ernst, 2005). Additionally, artistic and cultural activities lie at the core of a number of growing industrial sectors (including tourism, publishing and entertainment), and contribute directly to employment growth. Indeed, creative activities are increasingly being viewed as alternative development paths for some second-tier cities (see for example; Markusen & King, 2003). More dissenting voices have pointed out the ease with which the Creative city rhetoric fits with the neo-liberal regime. Creativity has been reduced to a dependent variable in the demand functions of urban/regional attractiveness. It is thereby linked to the primacy of global markets and is positioned as a central determinant of economic success (Gibson and Klocker, 2005 and Peck, 2005). The concept of creativity has been appropriated by governments (regional/urban and national) because of its ability to act as a catalyst in the cultural transition of individuals from ‘citizens’ to ‘entrepreneurs’ and ‘consumers’, the ‘idealised companions’ of the neo-liberal state: ‘liberated, independent and competitive subjects’ (Peck, 2004, 395). Using Galway City, in the west of Ireland as our case study, we explore how the city’s economy and society have been impacted by culture/cultural policies in the past, and what role they have in the city’s economic and social sustainability. In order to do this, we look firstly at the historical economic and social development of the city. From this, it quickly becomes clear that the city and region’s cultural history is innately bound with its economic and social development over the past number of years. This exploration also makes it clear that the city’s past economic and social success is bound with and dependant on the exploitation of the unique culture fostered in the city. In an attempt to explore this further, we gauge the city’s cultural exposition and sustainability according to three pillars which have been identified by others (see Craik, Davis, & Sutherland, 2002) as the critical domains of cultural policy: Technology; Institutions; and Spatial Culture. The spatial manifestation of culture is evident throughout all cities. Garcia’s work on the cultural legacies of Glasgow 1990 experience (European City/Capital of Culture) highlights the importance of local images, identities and communities in culture-led regeneration (Garcia, 2005). Also Waitt (2008) outlines the work of geographers investigating urban festivals as place marketing tools in the contemporary politics of entrepreneurialism. The rationale for using the three dimensions of technology, institutions and spatial culture is how they contribute to the cities cultural and competitive endowment. Previous work on the technology sector in Galway (Collins, 2007) acted as a starting point for an investigation as to the spatial practices in a post-Fordist economy. Highly mobile firms in an increasingly globalised economy have a greater breadth of location choices. Analysis of companies in Galway and Ireland (a country highly dependent on attracting foreign firms2) pointed to the increased weight placed on institutions and culture (in the sense of livability and place attractiveness) in location decisions. The importance placed on technology and policies related to it are recognized worldwide. Indeed, technology is found to be at the core of creative cities rhetoric because it is the sector most easily related to constant change and high value returns to innovation (see Florida, 2002; Peck, 2005). The role of arts, culture and their institutions forms our second pillar. Recognizing that creative activities have the potential to play a vital role in creating a unique image for a city, there exists a huge value in producing distinctive and unique cultural products (Gertler, 2004). Stimulating urban development or the recycling of urban space is yet another way in which creative activities are seen to impact urban economies. Here, we investigate the role that the formation of local artistic institutions has played on the city’s creative development. Our final pillar of analysis is spatial culture, encompassing the place of public performance in urban morphology. As explored in detail by Franklin (2004), public performance, and art festivals in particular, are an integral component of the creative city (echoing Florida’s thesis that part of the environmental and cultural diversity the creative class thrive on includes institutions like arts festivals). Such festivals often provide an interesting lens to explore how culture is contested (Waterman, 1998) and the relationship between art and governance. Notions of ‘ownership of culture’ and tensions between cultural and commercial pursuits are explored in line with what Waterman sees as the transformation of cultural to commercial interests. We explore this further by looking at the promotion of Galway as a consumer playground for the mobile and affluent through its cultural events.

There is a danger that research can romanticize creative industries. Consequently, it is imperative that more detailed empirical investigations be carried out, so that an informed body of knowledge will be available upon which political practices and policies can be formulated. The central tension between creativity/culture and capital accumulation must be accommodated and striving to maintain a balance between these two forces will require a more nuanced and grounded understanding of creative industries and cultural spaces. The unique urban form of Galway City has been central to its promotion as a centre of cultural activity. The cause and effect of city space in the case of Galway has been an interesting one. We have cited examples of urban renewal inspired by cultural performance. The involvement of community-led cultural organizations in the allocation of new cultural spaces in the city is imperative for future sustainability of a cultural Galway. Yet a key thread running through all of this paper has been the ease with which the creative/cultural city mantra has fit with the urban entrepreneurial approach of a city competing in a neo-liberal economic climate for investors, visitors and inhabitants. Criticisms of the Floridian method of ranking cities apply to the case of Galway. It has entered a form of urban competition, one that sees it compete with other second-tier cities in Ireland and beyond. By doing so, it has focused on a set of urban, social and economic assets at the expense of others in what can only be a ‘race towards the bottom’ of urban attractiveness. The adoption of creative/cultural city model by smaller cities should be treated with a greater degree of caution. Larger cities have a greater ability to absorb the narrow focus on the creative class and spatial culture. The risk of exclusion is greater in smaller urban centers. Throughout the case study of Galway, we have highlighted how the ‘ownership’ of culture has been contested. This contestation manifested itself in several ways: in the example of local businesses withdrawing their financial support of the Galway Arts Festival, citing the failure to showcase local artists, writers, etc.; in the example of the establishment of a new alternative arts festival ‘Project 06’; and in relation to the use of Macnas as a marketing tool by commercial actors and the state at national and local level. The above will serve to inform further work on the exploration of the place of culture and creativity in the development of Galway and other second tier European cities. We do not claim to have done more than scratch the surface of a number of questions that have emerged during the course of this enquiry. Yet this work has served to raise questions that warrant further investigation. For example, we question whether the new vocabulary of creative industries reflects real changes in the economy, or whether it is simply new cloak in which to wrap traditional goals? Related to this is the question of how much policies on creative cities differ from traditional urban policies. We note from work carried out on the community-based arts organization Macnas and Ireland’s fourth television channel, very different evolutionary trajectories. With the former demonstrative of an organic evolution out of economic deprivation and the latter the result of a concerted cultural/language policy, we question the difference between constructed and non-constructed institutional actors and their relative impacts on their locale. This area requires more research with impacts not only for Galway and Ireland, but for the development of second-tier cities across Europe.