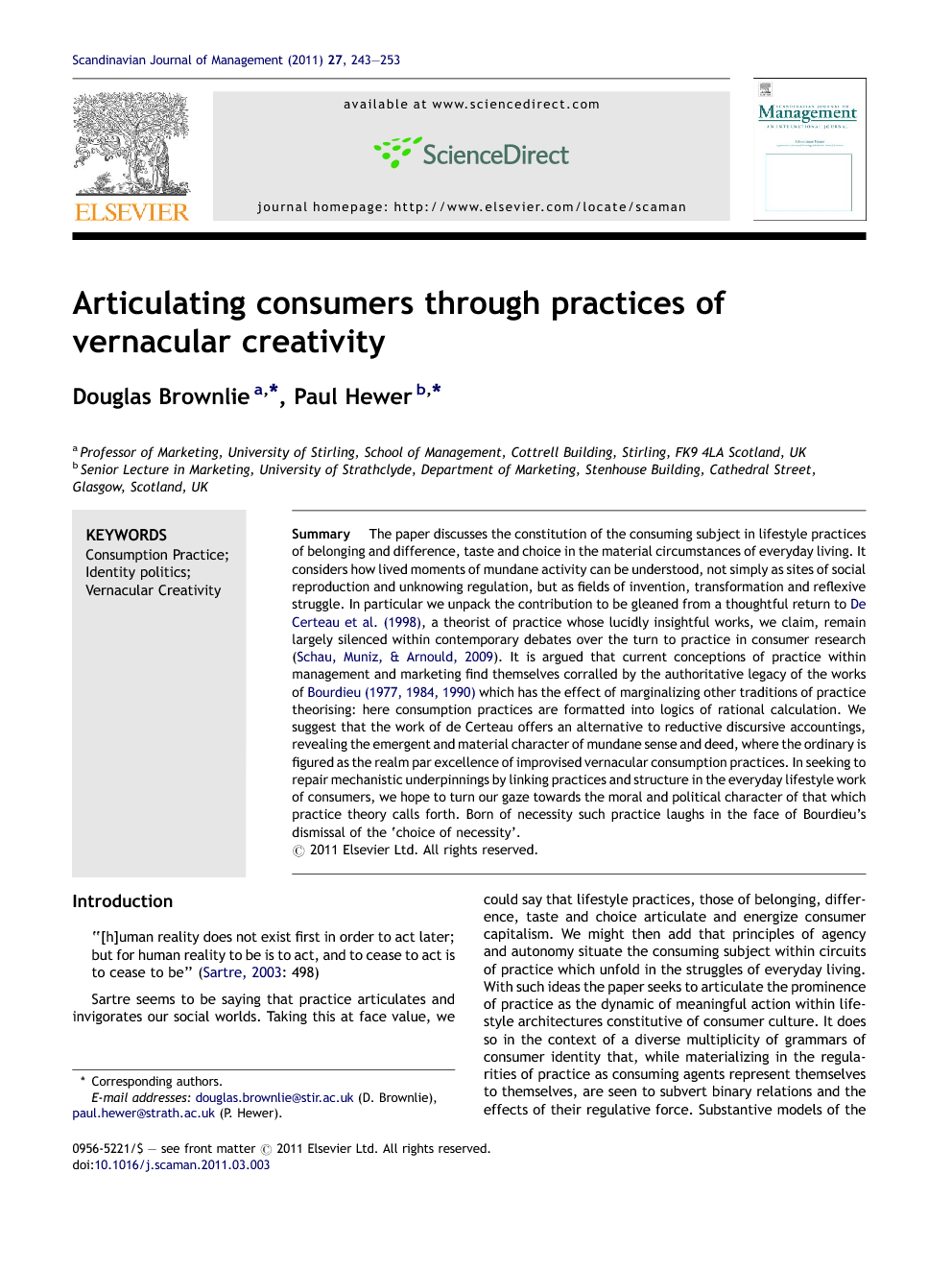 The paper discusses the constitution of the consuming subject in lifestyle practices of belonging and difference, taste and choice in the material circumstances of everyday living. It considers how lived moments of mundane activity can be understood, not simply as sites of social reproduction and unknowing regulation, but as fields of invention, transformation and reflexive struggle. In particular we unpack the contribution to be gleaned from a thoughtful return to De Certeau et al. (1998), a theorist of practice whose lucidly insightful works, we claim, remain largely silenced within contemporary debates over the turn to practice in consumer research (Schau, Muniz, & Arnould, 2009). It is argued that current conceptions of practice within management and marketing find themselves corralled by the authoritative legacy of the works of Bourdieu, 1977, Bourdieu, 1984 and Bourdieu, 1990 which has the effect of marginalizing other traditions of practice theorising: here consumption practices are formatted into logics of rational calculation. We suggest that the work of de Certeau offers an alternative to reductive discursive accountings, revealing the emergent and material character of mundane sense and deed, where the ordinary is figured as the realm par excellence of improvised vernacular consumption practices. In seeking to repair mechanistic underpinnings by linking practices and structure in the everyday lifestyle work of consumers, we hope to turn our gaze towards the moral and political character of that which practice theory calls forth. Born of necessity such practice laughs in the face of Bourdieu's dismissal of the ‘choice of necessity’.

“[h]uman reality does not exist first in order to act later; but for human reality to be is to act, and to cease to act is to cease to be” (Sartre, 2003: 498) Sartre seems to be saying that practice articulates and invigorates our social worlds. Taking this at face value, we could say that lifestyle practices, those of belonging, difference, taste and choice articulate and energize consumer capitalism. We might then add that principles of agency and autonomy situate the consuming subject within circuits of practice which unfold in the struggles of everyday living. With such ideas the paper seeks to articulate the prominence of practice as the dynamic of meaningful action within lifestyle architectures constitutive of consumer culture. It does so in the context of a diverse multiplicity of grammars of consumer identity that, while materializing in the regularities of practice as consuming agents represent themselves to themselves, are seen to subvert binary relations and the effects of their regulative force. Substantive models of the consuming subject are shown to locate the productive and transformative possibilities of agency in the doing of practical action and practical sense. They enlist the work of various practice theorists to frame lived moments of identity work as expressed in the artful, often subversive, bricolage of the ordinary, the mundane and the everyday. Seeking to negotiate space for the creative agency of consuming subjects within ‘practice theory’ (Schatzki, 2001: 3), the paper claims ontological priority for culture as praxis (Bauman, 1999), for cultural materials as they call themselves into being in lived moments of the everyday. This it sees as a pre-reflexive matrix of conditions of intelligibility which shapes social practice and is shaped by it. Indeed Gherardi (2000) observes that “practice is both our production of the world and the result of this process” (Gherardi, 2000: 215). In the sense that practices are culturally embedded entanglements they can be said to be “carriers of understanding and intelligibility” (Schatzki, 1996: 12). Yet, in holding that the work of identity is constituted within practice, the paper sets out to reveal how the status of consumers as adaptive and inventive actors is bound to identity work performed within generative social practice (Schatzki, 1996: 11). Specifically it discusses the treatment of the construct ‘resistance’, tracing circulating subject positions implicated in the shaping of concept, context and collective. To say that such subject positions are recursively organized and always in process is to invoke ‘structuration’ (Giddens, 1984) in that the identity work of ‘resistance’ is understood as an ‘ordering effect’ (Law, 1994) of various cultural materials as they “perform themselves through agents, through interaction between agents and through devices, texts and architectures” (Law, 1994: 24). And importantly, as Law goes on to argue, “representations shape, influence and participate in ordering practices […] ordering is not possible without representation” (Law, 1994: 25). The recursion at work in the context of consumer lifestyle practice reveals the operations of an economy of representation (interested containment and concealment) in which discursive arrangements forge identity concepts. And although the truth of some institutions is indeed that as they materialize the logic of collective practice, they also generate strategic representations that carry forward and perform strategically managed views of that practice, as Kjellberg and Helgesson (2007) confirm. The value of the turn to practice is not to be found in a rediscovery of functionalism and institutions as strategically interested idioms or progenitors of discourse. This insight is common parlance and always already in the mix of the lived everyday. Strategic discursive practices not only call forth identity concepts, they distribute them and set relational frames in play among a local production cohort where “everyone is in some sense aware of the reflexive constitution of modern social activity and the implications it has for her or his life” (Giddens, 1991: 14). Importantly, those preconditions of intelligibility and related discursive operations are made visible when, as Gherardi (2000) trenchantly observes, “the breaching of rules [of invisibility of concealment] exposes the rule-based operations that produce a ‘normal’ situation” (Gherardi, 2000: 215). Those breaches and subversions are revealed in the activities whereby consumers produce and manage natural settings of order producing organization. As a result, we suggest that discourse-driven accountings overlook the invention of actors in settings of complex intermediated networks of practice, where practices are in process and constantly assembling new meanings; and are far removed from being determined by extant institutions and their strategically interested representations. Indeed it occurs to the authors that the task of ‘marketing as practice’ approaches is not to take the activity, say of authoring marketing strategy, as the ‘primary strip’ (Goffman, 1986: 21), but to construct points of perspective at least once removed from such baseline representation. In problematizing practices of strategically attending to the production of a sequence of methods witnessable as, say, share-of-voice targets, the focal phenomenon becomes not simply process or management calculation, or first order representation, but the local methods of ‘cultural calculation’ (Barry & Slater, 2002), of producing “some organizational event as the situated, local accomplishment of its production cohort in producing that event as just the event it accountably is” (Livingston, 1987: 8). Consequently, if, as Johnson, Melin, & Whittington, 2003 trenchantly observe, “we are to aid management and the managing of organizations we need to achieve a higher degree of reflexivity among [those] actors about what they are doing” (Johnson et al., 2003: 5).

In this paper we have sought to unpack the contribution to be gleaned from a return to theorists of practice who remain silenced within current debates over the notion of Marketing as Strategy and Practice, namely the work of De Certeau (1988) and others (De Certeau et al., 1998). Our theoretical discussion argues that current conceptions of practices and strategy within management and marketing are limited by their inattention to early traditions of thought around these concepts; for the uninitiated it's as if theories of practices start with Echeverri and Skålén (in press) or Schau et al. (2009) with an all-too-brief nod in the direction of Bourdieu, 1977 and Bourdieu, 1990 and Foucault (1977). Instead we suggest we need more than this gesturing around practices, more work within our discipline which does a similar job to that of Warde (2005), Shove and Pantzar (2005) and Shove and Walker (2007). Our paper in its own small way seeks to attend to one such theorist largely bracketed from extended discussion in the work of Warde (2005). In this way, our paper pays tribute to the debts we owe to social theorists who foregrounded ways of thinking practices, and asks what might be revealed by a turning back to such theorists. We guess the unintended consequence of this foregrounding is to refocus academic attention upon the practices and writing of theorizing itself. Here theorizing itself becomes a form of engaged practice in its own right (see also Zundel & Kokkalis, 2010); a struggle to work with the materials available to us. In many senses when we practice that act of theorizing, tensions emerge, sleights of thought produce ways of thinking, representations sometimes take us down blind alleys of circumstance, staging a contribution is often at the expense of others, and contributions belie ambiguity. However, the practice approach adopted in this paper suggests the central to practice of theorizing is that of dealing with uncertainty and ambivalence, here we return to the thoughts of Bauman: “The ambiguity which truly matters, the sense-giving ambivalence, the genuine foundation on which the cognitive usefulness of conceiving human habitat as the ‘world of culture’ rests, is the ambivalence of conceiving ‘creativity’ and ‘normative regulation’. The two idea could not be further apart, yet both are – and must remain – present in the composite idea of culture. ‘Culture’ is as much about inventing as it is about preserving; about discontinuity as much as about continuation; about novelty as much as about tradition; about routine as much as about pattern-breaking; about norm-following as much as about the transcendence of norm; about the unique as much as about the regular; about change as much as about monotony of reproduction; about the unexpected as much as about the predictable.” (1999: xiii). In the fast-moving world of academic production, distribution and diffusion something we suggest remains lost; that is, in our all too eager haste to publish, depth of analysis or considered theorizing is too often forsaken, instead theory is skirted over in our haste to get to method and findings and the holy grail of impact. Ambivalence within contexts is often erased or concealed for the purposes of staging a contribution. But a return to the insights of De Certeau (1988) suggests that much is still to be gained from revisiting those theorists who have sought to question the import of practices and ways of making practices as amenable to cultural analysis. Much is still to be gained from acts of remembering their insights and provocations rather than forgetting in the name of staging impact and contribution. Our work opens up a set of questions for the emergent domains of Strategy as Practice and Marketing-as-Practice as Strategy. In some senses, it offers a problematisation of what we naively speak of us practice, exploring the ways in which practice operates, exploring the praxis of practice, what Bourdieu termed the logic of practice. Naive questions such as how do marketers do what they do? How best can we sensitise ourselves to the doings of marketers? How do marketers do marketing? What are the discursive and social practices of marketing which marketers in different domains draw on to enact and perform their professional role? What is the role of marketing in the strategy process, and the role of strategy in the marketing process? How are the political tensions between strategy and marketing played out in interactional organizational settings? How does marketing-as-discourse, including academic discourse, order organizational action and roles? What are the purposes of these ordering activities, in other words, who gains and who loses? How can local intra-organizational marketing practice be understood against common and shared marketing practices on the field level? How do marketing practices evolve and transform? Whom or what do they transform and how does this transformation impact on human subjectivity? Answers to such questions lie beyond the remit of this paper, but they look like the kind of questions which should be asked if we are not to reproduce the mistakes of yesteryear and foreclose rather than open up the possibilities to emerge from practice-based approaches.