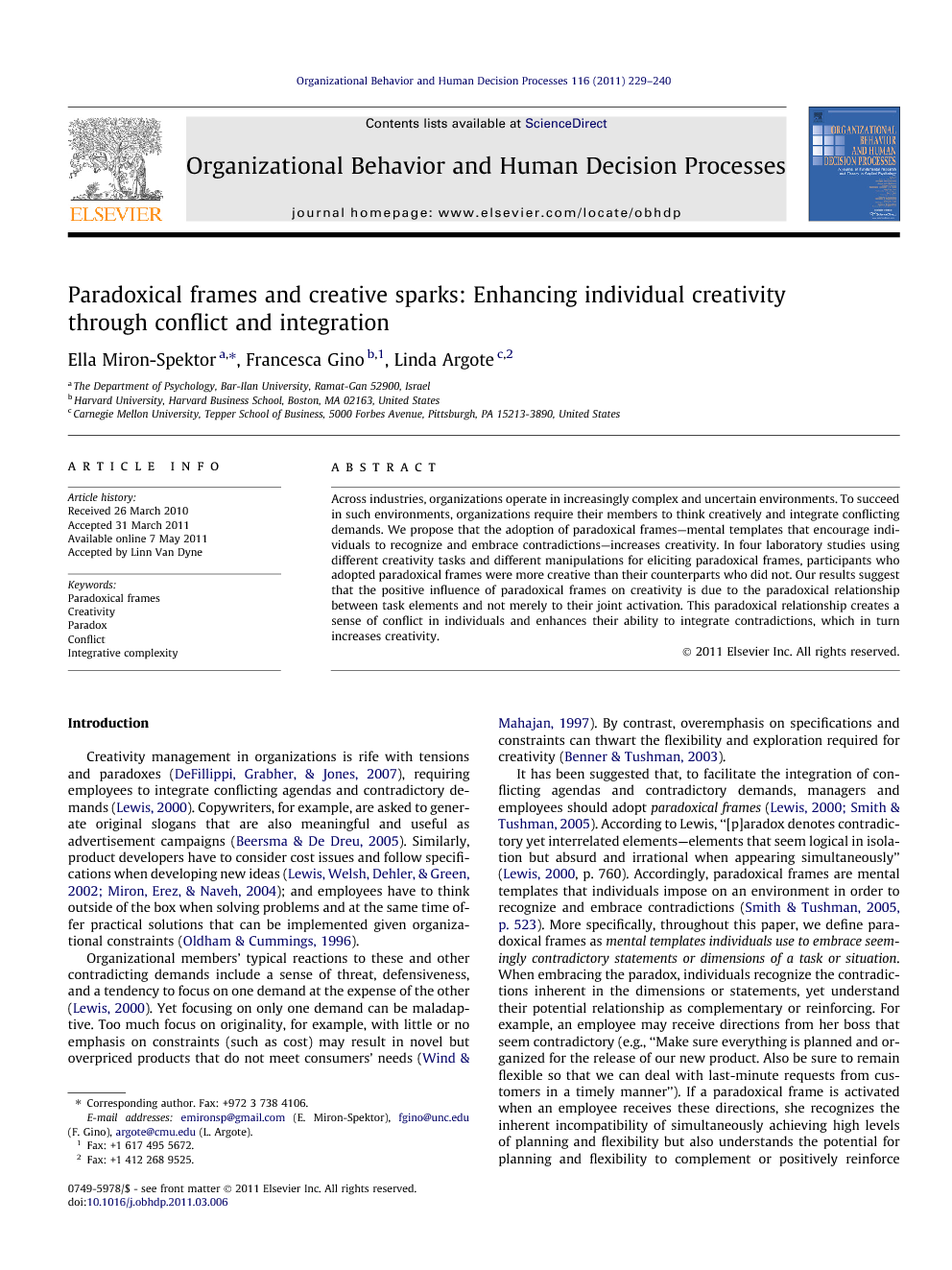 Across industries, organizations operate in increasingly complex and uncertain environments. To succeed in such environments, organizations require their members to think creatively and integrate conflicting demands. We propose that the adoption of paradoxical frames—mental templates that encourage individuals to recognize and embrace contradictions—increases creativity. In four laboratory studies using different creativity tasks and different manipulations for eliciting paradoxical frames, participants who adopted paradoxical frames were more creative than their counterparts who did not. Our results suggest that the positive influence of paradoxical frames on creativity is due to the paradoxical relationship between task elements and not merely to their joint activation. This paradoxical relationship creates a sense of conflict in individuals and enhances their ability to integrate contradictions, which in turn increases creativity.

Creativity management in organizations is rife with tensions and paradoxes (DeFillippi, Grabher, & Jones, 2007), requiring employees to integrate conflicting agendas and contradictory demands (Lewis, 2000). Copywriters, for example, are asked to generate original slogans that are also meaningful and useful as advertisement campaigns (Beersma & De Dreu, 2005). Similarly, product developers have to consider cost issues and follow specifications when developing new ideas (Lewis et al., 2002 and Miron et al., 2004); and employees have to think outside of the box when solving problems and at the same time offer practical solutions that can be implemented given organizational constraints (Oldham & Cummings, 1996). Organizational members’ typical reactions to these and other contradicting demands include a sense of threat, defensiveness, and a tendency to focus on one demand at the expense of the other (Lewis, 2000). Yet focusing on only one demand can be maladaptive. Too much focus on originality, for example, with little or no emphasis on constraints (such as cost) may result in novel but overpriced products that do not meet consumers’ needs (Wind & Mahajan, 1997). By contrast, overemphasis on specifications and constraints can thwart the flexibility and exploration required for creativity (Benner & Tushman, 2003). It has been suggested that, to facilitate the integration of conflicting agendas and contradictory demands, managers and employees should adopt paradoxical frames ( Lewis, 2000 and Smith and Tushman, 2005). According to Lewis, “[p]aradox denotes contradictory yet interrelated elements—elements that seem logical in isolation but absurd and irrational when appearing simultaneously” (Lewis, 2000, p. 760). Accordingly, paradoxical frames are mental templates that individuals impose on an environment in order to recognize and embrace contradictions (Smith & Tushman, 2005, p. 523). More specifically, throughout this paper, we define paradoxical frames as mental templates individuals use to embrace seemingly contradictory statements or dimensions of a task or situation. When embracing the paradox, individuals recognize the contradictions inherent in the dimensions or statements, yet understand their potential relationship as complementary or reinforcing. For example, an employee may receive directions from her boss that seem contradictory (e.g., “Make sure everything is planned and organized for the release of our new product. Also be sure to remain flexible so that we can deal with last-minute requests from customers in a timely manner”). If a paradoxical frame is activated when an employee receives these directions, she recognizes the inherent incompatibility of simultaneously achieving high levels of planning and flexibility but also understands the potential for planning and flexibility to complement or positively reinforce one another. Planning and organizing, for example, can help prepare for alternative reactions of customers and thus enable greater flexibility when addressing their needs (Vera & Crossan, 2005). But if a paradoxical frame is not activated, then the employee is likely to focus on only one dimension and not the other and miss the opportunity to achieve both. In general, paradoxical frames encourage “paradoxical inquiry,” in which a problem is identified, its contradictory elements and their links are revealed and explored, and alternative solutions are found and tested (DeFillippi et al., 2007 and Luscher and Lewis, 2008). The degree to which managers understand and accept contradictions affects whether they “embrace the tensions and benefit from them or are halted by the inconsistencies” (Smith & Tushman, 2005, p. 526). Furthermore, scholars have argued that adopting paradoxical frames improves managers’ ability to attend to and deal with strategic contradictions (Smith & Tushman, 2005) and leads managers to reach new insights to existing problems (Luscher & Lewis, 2008). Despite these important insights into the possibilities of paradoxical frames, no empirical study has examined the effects of paradoxical frames on creativity. Addressing this gap, the present work examines the influence of paradoxical frames on the ability of individuals to be creative. We bring the phenomenon of paradoxical frames into a controlled laboratory setting and manipulate paradoxical frames using different priming tasks. Across four laboratory studies, we also employ different creativity tasks to examine the generalizability of our findings and explore the psychological mechanisms explaining the relationship between adopting paradoxical frames and creativity.