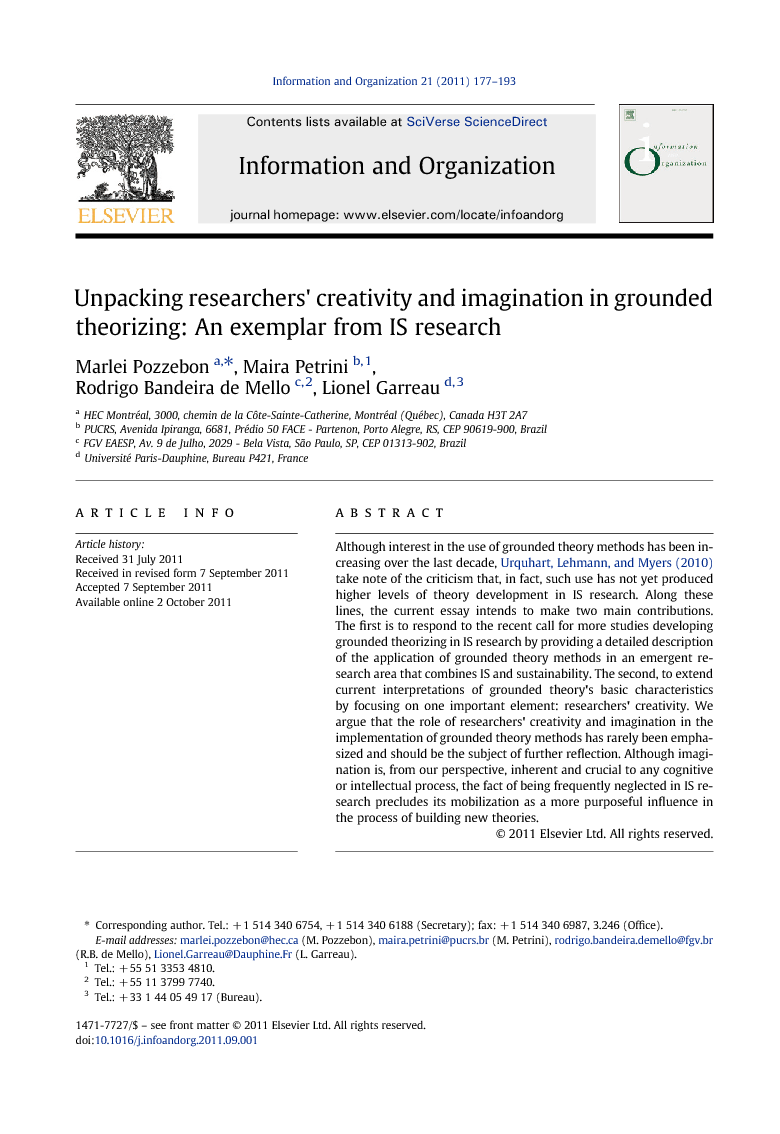 Although interest in the use of grounded theory methods has been increasing over the last decade, Urquhart, Lehmann, and Myers (2010) take note of the criticism that, in fact, such use has not yet produced higher levels of theory development in IS research. Along these lines, the current essay intends to make two main contributions. The first is to respond to the recent call for more studies developing grounded theorizing in IS research by providing a detailed description of the application of grounded theory methods in an emergent research area that combines IS and sustainability. The second, to extend current interpretations of grounded theory's basic characteristics by focusing on one important element: researchers' creativity. We argue that the role of researchers' creativity and imagination in the implementation of grounded theory methods has rarely been emphasized and should be the subject of further reflection. Although imagination is, from our perspective, inherent and crucial to any cognitive or intellectual process, the fact of being frequently neglected in IS research precludes its mobilization as a more purposeful influence in the process of building new theories.

In any type of empirical work, the researcher always faces difficult choices. In this article we have reported some of the choices we made in applying grounded theory. One of the significant choices we made concerned the adaptation of Pandit's (1996) step-by-step version of grounded theory. This adaptation was opportunistic, given the fact that, from the very beginning of our work, we could recognize outstanding firms that excel in sustainability practices in Brazil and from whom we believed we could learn about conditions facilitating or promoting the alignment of information planning and sustainability with organizational practices. Stake (2005) would term this an instrumental choice. Pandit (1996) did not recommend prior selection of cases, except for the first case. On the contrary, according to him, the selection of cases should occur as data collection and analysis evolved. We decided to make an adaptation of this criterion and we believe that the results are very positive, showing that the most important characteristic of grounded theory, and the one most worth preserving, lies in the systematic and iterative manner of overlapping data collection and analysis. In other words, grounded theory provides a well-structured frame, but allows space for some flexibility (Calloway and Knaap, 2005 and Strauss and Corbin, 1990). Researchers should use this space in creative fashion in order to improve the relevance of the theoretical framework they develop. One of the objectives of this article was to illustrate the potential of grounded theory as a research methodology for building models from the reality being investigated. The method allowed us to produce an original model emerging from the practices of Brazilian firms recognized for solid accomplishment in terms of sustainability. However, in line with the goal of most researchers, we believe the proposed model exhibits a precious attribute – plausibility – which increases its potential for external transferability. The experience of one of the authors in the North American business context suggests that the categories, properties and relationships proposed by the conceptual model are relevant not only to the Brazilian context but to firms located in other Occidental countries, in the Americas and Europe, which could also learn from it. Development of theory is a sensemaking process. We bring into discussion the importance of the researcher's background and imagination in making choices, particularly when the logic guiding the empirical work is of a purely inductive nature. In our field work, creativity and imagination played a less important role in the generation of sub-categories and a more important role in the establishment of relationships among them and in the creation of categories of a higher level of abstraction: from sub-categories to categories and from categories to blocks. There is no guarantee that systematic and iterative use of techniques like constant comparison will allow the researcher to “discover” (produce) a new theory. From our point of view, theory building is always an interpretive exercise, where researchers' subjectivity, background, creativity and imagination, even if disciplined, have an important influence on the nature and content of the theory being built. Likewise, readers' subjectivity and background will also play a role in accepting and legitimating a proposed new theory. Finally, this article seeks to provide evidence of the richness of combining induction, a bit of deduction and inspiration, as suggested by Langley (1999). Although mobilizing, in the first stages, an inductive logic for building the first draft of a new framework model, the grounded approach adopted here did not neglect existing literature, which is mobilized at two points: at the very beginning, to help better define the boundaries of the research question, and at the end of the data analysis, being integrated into the final step of constant comparison, in order to challenge and enrich the theoretical model being built. In addition, generous portions of inspiration are necessary in many situations of collection and analysis, where researchers decide which ideas will survive and which will be discarded in the explanation they are building, “discovering” from empirical data, but also from their experience, knowledge, preferences, creativity and, sometimes, even the lack thereof.