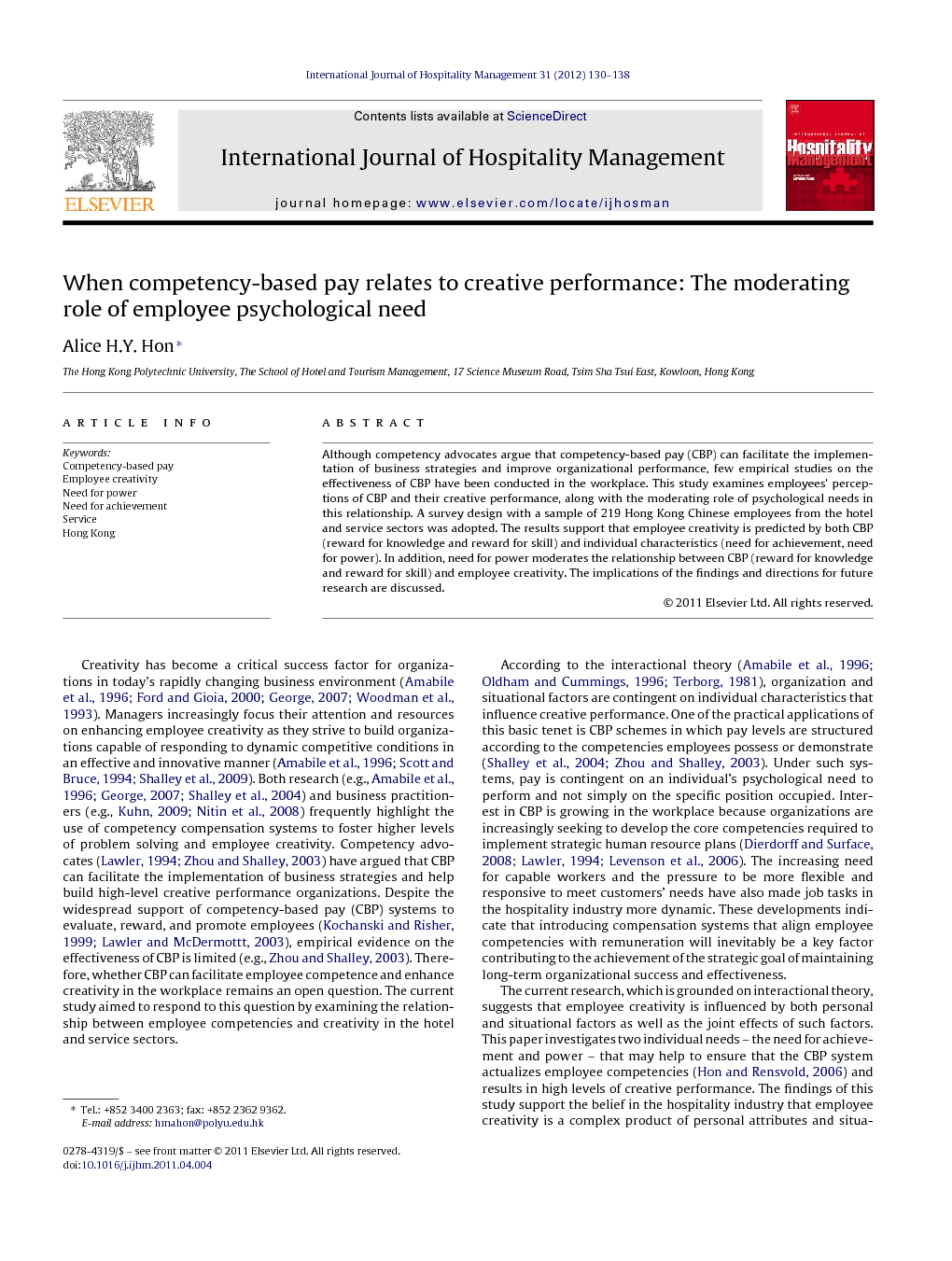 Although competency advocates argue that competency-based pay (CBP) can facilitate the implementation of business strategies and improve organizational performance, few empirical studies on the effectiveness of CBP have been conducted in the workplace. This study examines employees’ perceptions of CBP and their creative performance, along with the moderating role of psychological needs in this relationship. A survey design with a sample of 219 Hong Kong Chinese employees from the hotel and service sectors was adopted. The results support that employee creativity is predicted by both CBP (reward for knowledge and reward for skill) and individual characteristics (need for achievement, need for power). In addition, need for power moderates the relationship between CBP (reward for knowledge and reward for skill) and employee creativity. The implications of the findings and directions for future research are discussed.

Creativity has become a critical success factor for organizations in today's rapidly changing business environment (Amabile et al., 1996, Ford and Gioia, 2000, George, 2007 and Woodman et al., 1993). Managers increasingly focus their attention and resources on enhancing employee creativity as they strive to build organizations capable of responding to dynamic competitive conditions in an effective and innovative manner (Amabile et al., 1996, Scott and Bruce, 1994 and Shalley et al., 2009). Both research (e.g., Amabile et al., 1996, George, 2007 and Shalley et al., 2004) and business practitioners (e.g., Kuhn, 2009 and Nitin et al., 2008) frequently highlight the use of competency compensation systems to foster higher levels of problem solving and employee creativity. Competency advocates (Lawler, 1994 and Zhou and Shalley, 2003) have argued that CBP can facilitate the implementation of business strategies and help build high-level creative performance organizations. Despite the widespread support of competency-based pay (CBP) systems to evaluate, reward, and promote employees (Kochanski and Risher, 1999 and Lawler and McDermottt, 2003), empirical evidence on the effectiveness of CBP is limited (e.g., Zhou and Shalley, 2003). Therefore, whether CBP can facilitate employee competence and enhance creativity in the workplace remains an open question. The current study aimed to respond to this question by examining the relationship between employee competencies and creativity in the hotel and service sectors. According to the interactional theory (Amabile et al., 1996, Oldham and Cummings, 1996 and Terborg, 1981), organization and situational factors are contingent on individual characteristics that influence creative performance. One of the practical applications of this basic tenet is CBP schemes in which pay levels are structured according to the competencies employees possess or demonstrate (Shalley et al., 2004 and Zhou and Shalley, 2003). Under such systems, pay is contingent on an individual's psychological need to perform and not simply on the specific position occupied. Interest in CBP is growing in the workplace because organizations are increasingly seeking to develop the core competencies required to implement strategic human resource plans (Dierdorff and Surface, 2008, Lawler, 1994 and Levenson et al., 2006). The increasing need for capable workers and the pressure to be more flexible and responsive to meet customers’ needs have also made job tasks in the hospitality industry more dynamic. These developments indicate that introducing compensation systems that align employee competencies with remuneration will inevitably be a key factor contributing to the achievement of the strategic goal of maintaining long-term organizational success and effectiveness. The current research, which is grounded on interactional theory, suggests that employee creativity is influenced by both personal and situational factors as well as the joint effects of such factors. This paper investigates two individual needs – the need for achievement and power – that may help to ensure that the CBP system actualizes employee competencies (Hon and Rensvold, 2006) and results in high levels of creative performance. The findings of this study support the belief in the hospitality industry that employee creativity is a complex product of personal attributes and situational effects (Hon and Rensvold, 2006 and Oldham and Cummings, 1996). Thus, one objective of this paper is to shed light on the separate and joint effects of CBP and individual characteristics in facilitating employee creativity. Moreover, in the interests of broadening management theory in the hotel service industry (Hon and Lu, 2010) so that it has global (rather than only U.S.-based) relevance and contributes to the effective management of nationally diverse workforces, it is important to understand how CBP influences employee creativity in areas outside the United States, such as Hong Kong. Research in a new cultural setting can help to assess the generalizability of interactional and creativity theories developed in Western settings (Kim et al., 2009 and Niu and Sternberg, 2002). In addition, many multinational companies such as those operating in the service sector are now relocating “knowledge-creating” jobs to East Asia (Chen et al., 2005 and Farmer et al., 2003). Thus, another goal of the present study is the cross-validation of the linkage between CBP and employee creativity in an Asian setting. The following sections review how the dimensions of CBP and employees’ psychological needs affect creative performance. After this, the interaction effects of the two individual needs on the linkage between CBP and employee creativity are discussed.