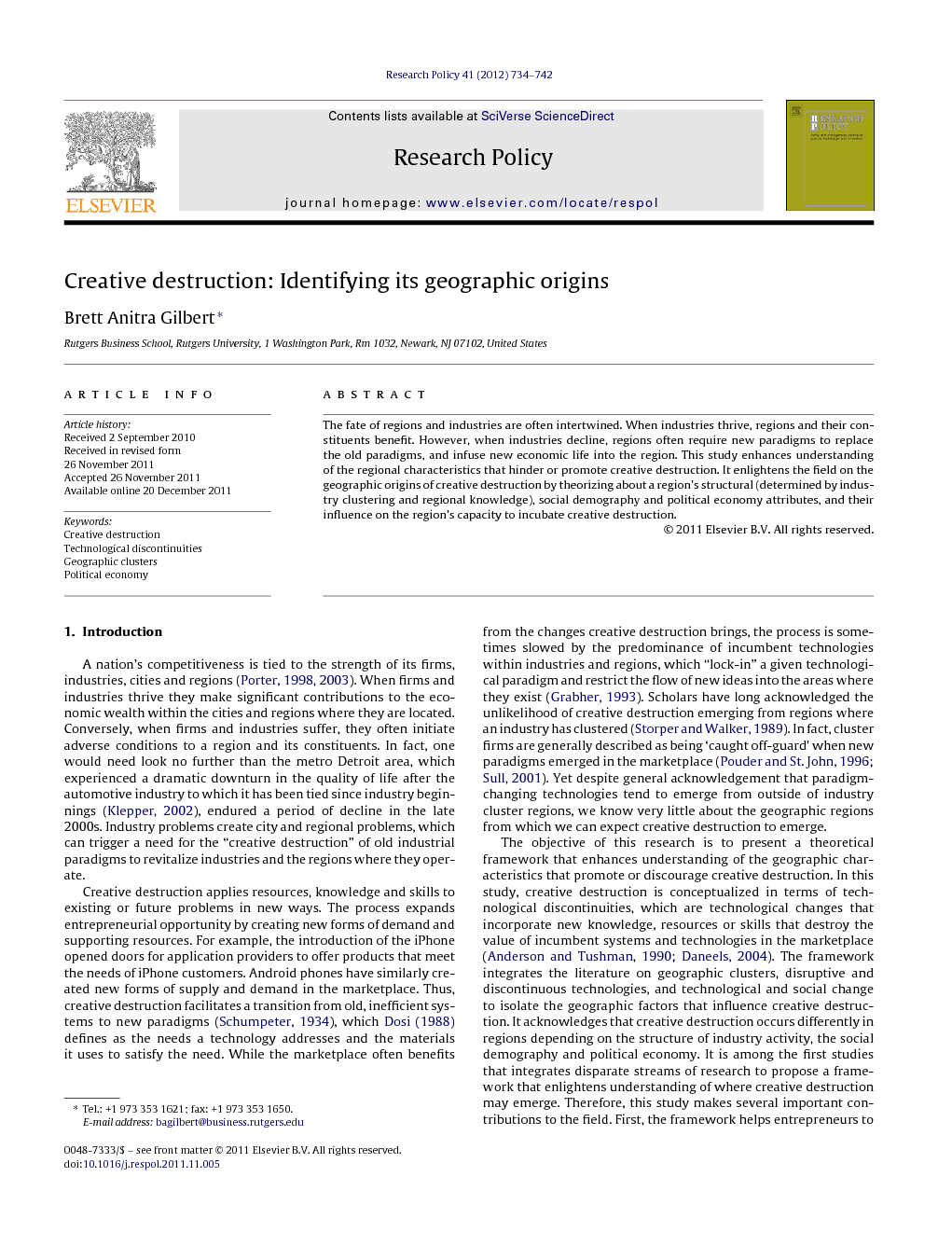 The fate of regions and industries are often intertwined. When industries thrive, regions and their constituents benefit. However, when industries decline, regions often require new paradigms to replace the old paradigms, and infuse new economic life into the region. This study enhances understanding of the regional characteristics that hinder or promote creative destruction. It enlightens the field on the geographic origins of creative destruction by theorizing about a region's structural (determined by industry clustering and regional knowledge), social demography and political economy attributes, and their influence on the region's capacity to incubate creative destruction.

A nation's competitiveness is tied to the strength of its firms, industries, cities and regions (Porter, 1998 and Porter, 2003). When firms and industries thrive they make significant contributions to the economic wealth within the cities and regions where they are located. Conversely, when firms and industries suffer, they often initiate adverse conditions to a region and its constituents. In fact, one would need look no further than the metro Detroit area, which experienced a dramatic downturn in the quality of life after the automotive industry to which it has been tied since industry beginnings (Klepper, 2002), endured a period of decline in the late 2000s. Industry problems create city and regional problems, which can trigger a need for the “creative destruction” of old industrial paradigms to revitalize industries and the regions where they operate. Creative destruction applies resources, knowledge and skills to existing or future problems in new ways. The process expands entrepreneurial opportunity by creating new forms of demand and supporting resources. For example, the introduction of the iPhone opened doors for application providers to offer products that meet the needs of iPhone customers. Android phones have similarly created new forms of supply and demand in the marketplace. Thus, creative destruction facilitates a transition from old, inefficient systems to new paradigms (Schumpeter, 1934), which Dosi (1988) defines as the needs a technology addresses and the materials it uses to satisfy the need. While the marketplace often benefits from the changes creative destruction brings, the process is sometimes slowed by the predominance of incumbent technologies within industries and regions, which “lock-in” a given technological paradigm and restrict the flow of new ideas into the areas where they exist (Grabher, 1993). Scholars have long acknowledged the unlikelihood of creative destruction emerging from regions where an industry has clustered (Storper and Walker, 1989). In fact, cluster firms are generally described as being ‘caught off-guard’ when new paradigms emerged in the marketplace (Pouder and St. John, 1996 and Sull, 2001). Yet despite general acknowledgement that paradigm-changing technologies tend to emerge from outside of industry cluster regions, we know very little about the geographic regions from which we can expect creative destruction to emerge. The objective of this research is to present a theoretical framework that enhances understanding of the geographic characteristics that promote or discourage creative destruction. In this study, creative destruction is conceptualized in terms of technological discontinuities, which are technological changes that incorporate new knowledge, resources or skills that destroy the value of incumbent systems and technologies in the marketplace (Anderson and Tushman, 1990 and Daneels, 2004). The framework integrates the literature on geographic clusters, disruptive and discontinuous technologies, and technological and social change to isolate the geographic factors that influence creative destruction. It acknowledges that creative destruction occurs differently in regions depending on the structure of industry activity, the social demography and political economy. It is among the first studies that integrates disparate streams of research to propose a framework that enlightens understanding of where creative destruction may emerge. Therefore, this study makes several important contributions to the field. First, the framework helps entrepreneurs to understand the extent to which a region will have the capacity to incubate creative destruction. It also aids regional policy officials in their efforts to exercise strategic management over industrial activities in their regions. Second, as many cities have initiated activities to begin a transition to new socio-technical paradigms (Hodson and Marvin, 2010), this research is well-timed to provide insights that aid those who are fostering the transitions. Last, to scholars of economic geography, entrepreneurship and strategic management, this framework adds new perspectives with respect to how to conceptualize and examine regions and their potential for creative destruction.

Creative destruction is an important force that changes the industrial landscape, and is perhaps critical for reshaping regional and national competitiveness. Understanding from where creative destruction emerges is an important step toward explicating the potential geographic sources of new technologies. Using this framework, entrepreneurs can identify the attributes of locations in which to incubate creative destruction. Likewise, policy officials can use the framework to estimate their region's capacity for creative destruction. Industry incumbents can use it to identify potential regions where competing technologies may be likely to emerge. With this knowledge, industry incumbents would know where they should look to broaden their innovative milieu to be inclusive of firms or knowledge producers in regions where new knowledge paradigms are emerging. Broadening their reach could ensure that firms, industries and regions remain well positioned for competitiveness into the future.