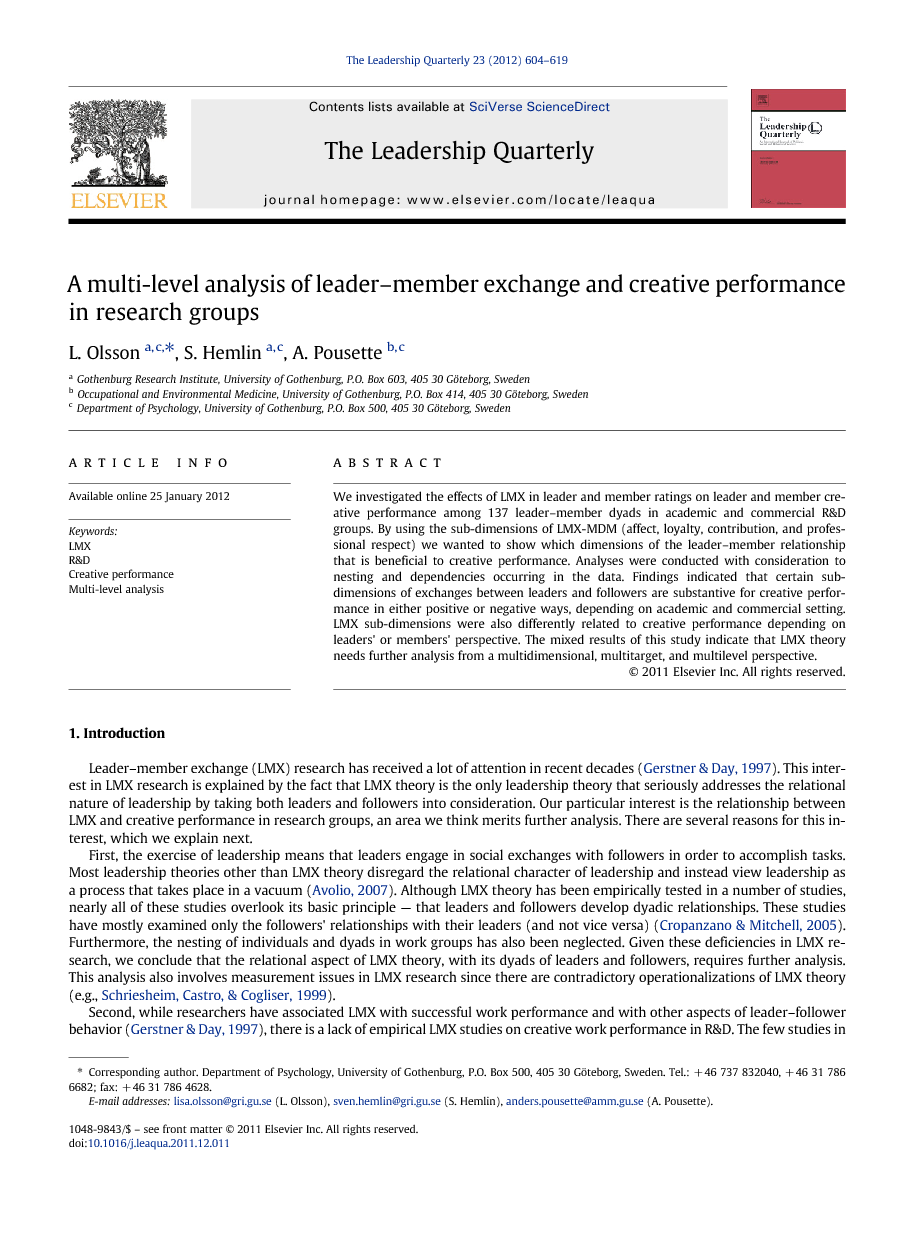 Leader–member exchange (LMX) research has received a lot of attention in recent decades (Gerstner & Day, 1997). This interest in LMX research is explained by the fact that LMX theory is the only leadership theory that seriously addresses the relational nature of leadership by taking both leaders and followers into consideration. Our particular interest is the relationship between LMX and creative performance in research groups, an area we think merits further analysis. There are several reasons for this interest, which we explain next. First, the exercise of leadership means that leaders engage in social exchanges with followers in order to accomplish tasks. Most leadership theories other than LMX theory disregard the relational character of leadership and instead view leadership as a process that takes place in a vacuum (Avolio, 2007). Although LMX theory has been empirically tested in a number of studies, nearly all of these studies overlook its basic principle — that leaders and followers develop dyadic relationships. These studies have mostly examined only the followers' relationships with their leaders (and not vice versa) (Cropanzano & Mitchell, 2005). Furthermore, the nesting of individuals and dyads in work groups has also been neglected. Given these deficiencies in LMX research, we conclude that the relational aspect of LMX theory, with its dyads of leaders and followers, requires further analysis. This analysis also involves measurement issues in LMX research since there are contradictory operationalizations of LMX theory (e.g., Schriesheim, Castro, & Cogliser, 1999). Second, while researchers have associated LMX with successful work performance and with other aspects of leader–follower behavior (Gerstner & Day, 1997), there is a lack of empirical LMX studies on creative work performance in R&D. The few studies in R&D have produced ambiguous results (Lee, 2008 and Scott and Bruce, 1994). Therefore, in our research we hope to bring more clarity to the connection between LMX and creative performance in R&D. Third, there is an idea that LMX, rather than being a unified exchange of social goods, refers to several, distinct social exchanges. This idea suggests the multi-various nature of the leader–follower relationship as a relationship of more than the one leader–follower exchange in work situations. Early leadership research suggests that there are two main types of leader–follower exchanges: socio-emotional exchanges and task or professional exchanges (Liden and Maslyn, 1998 and Mumford, 2010). Nevertheless, most LMX research has taken a uni-dimensional view of such exchanges. Therefore, we lack empirical research on the multi-dimensionality of leader–follower exchanges. For example, it is possible that leader–follower relationships vary as organizational settings and tasks vary. Liden and Maslyn (1998), who claim that the leader–member-relationship consists of multiple dimensions, have developed and verified a multi-dimensional LMX-measure (LMX-MDM). They identify four sub-dimensions of LMX – affect, loyalty, contribution, and professional respect – and suggest these sub-dimensions produce different outcomes. Fourth, most R&D leadership studies have been conducted in industrial and other commercial contexts (Lee, 2008, Scott and Bruce, 1994 and Tierney et al., 1999). Fewer studies have been conducted in academic and other not-for-profit research contexts (Elkins & Keller, 2003). However, one of the few but well-known studies of academic performance and leadership, although without LMX theory, was conducted by Pelz and Andrews (1966) almost fifty years ago. More recently, Lee (2008) used LMX theory in a study that included academic scientists. Given the big changes in universities since the Pelz and Andrew research and the altered conditions for leaders and followers in academic research, it is important and useful to examine how LMX relates to creative performance by contemporary academic scientific researchers. The fundamental premise of LMX theory is that a leader and a follower develop a relationship through social and professional exchanges, forming a unique dyad. By definition, then, LMX theory is multi-level: individuals are nested in dyads, but also in groups, and organizations. Recognition of this concept means three actions are called for. First, we need to align measurement and analysis to fit theory to the dyadic level of analysis. Surprisingly, dyadic level analyses are missing in research, even if the leader–member dyad is at the core of LMX theory ( Gooty and Yammarino, 2011 and Schriesheim et al., 2001). Second, we need to specify the levels where we expect LMX to have effects (Schriesheim et al., 1999). Third, since the data in the dyadic relationship are nested, we need to explain the dependencies in data that arise from grouping.

In conclusion, LMX is a preferable theory to many other leadership theories because it highlights the relational character of leading. However, as is shown here and by others, the testing of the theory is accompanied by complicated measurement and design challenges. We advance LMX theory and its measurement by showing the importance of taking into account the four LMX sub-dimensions as well as the different importance of both leaders' and members' perspectives on these sub-dimensions. The result that some LMX sub-dimensions, as Liden and Maslyn (1998) found, related to the outcome measures lends support to the theory that certain exchanges between leaders and followers are substantive for creative performance in either positive or negative ways, depending on academic or commercial research setting, and depending on whether a leader or member perspective is taken.