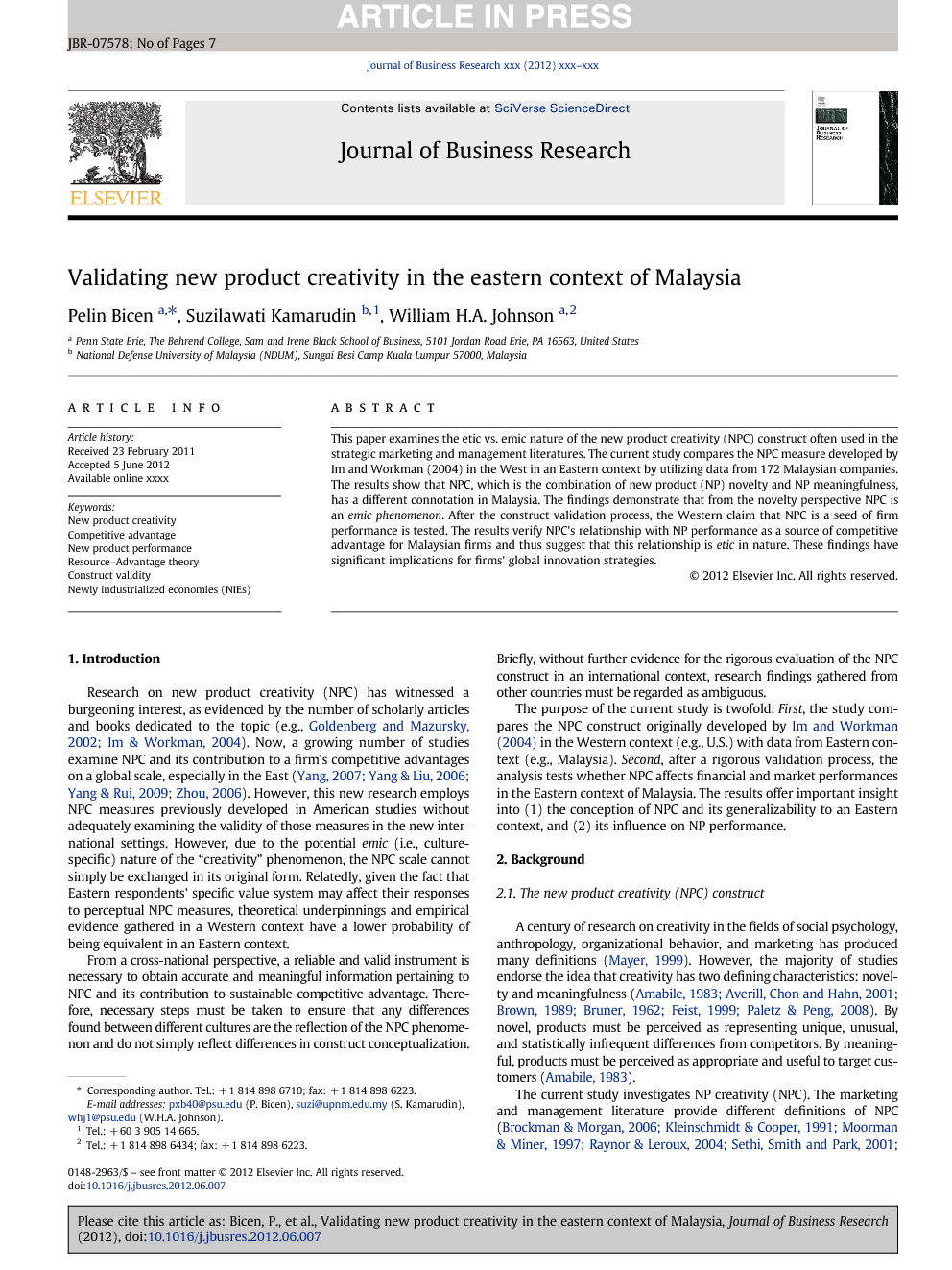 This paper examines the etic vs. emic nature of the new product creativity (NPC) construct often used in the strategic marketing and management literatures. The current study compares the NPC measure developed by Im and Workman (2004) in the West in an Eastern context by utilizing data from 172 Malaysian companies. The results show that NPC, which is the combination of new product (NP) novelty and NP meaningfulness, has a different connotation in Malaysia. The findings demonstrate that from the novelty perspective NPC is an emic phenomenon. After the construct validation process, the Western claim that NPC is a seed of firm performance is tested. The results verify NPC's relationship with NP performance as a source of competitive advantage for Malaysian firms and thus suggest that this relationship is etic in nature. These findings have significant implications for firms' global innovation strategies.

Research on new product creativity (NPC) has witnessed a burgeoning interest, as evidenced by the number of scholarly articles and books dedicated to the topic (e.g., Goldenberg and Mazursky, 2002 and Im and Workman, 2004). Now, a growing number of studies examine NPC and its contribution to a firm's competitive advantages on a global scale, especially in the East (Yang, 2007, Yang and Liu, 2006, Yang and Rui, 2009 and Zhou, 2006). However, this new research employs NPC measures previously developed in American studies without adequately examining the validity of those measures in the new international settings. However, due to the potential emic (i.e., culture-specific) nature of the “creativity” phenomenon, the NPC scale cannot simply be exchanged in its original form. Relatedly, given the fact that Eastern respondents' specific value system may affect their responses to perceptual NPC measures, theoretical underpinnings and empirical evidence gathered in a Western context have a lower probability of being equivalent in an Eastern context. From a cross-national perspective, a reliable and valid instrument is necessary to obtain accurate and meaningful information pertaining to NPC and its contribution to sustainable competitive advantage. Therefore, necessary steps must be taken to ensure that any differences found between different cultures are the reflection of the NPC phenomenon and do not simply reflect differences in construct conceptualization. Briefly, without further evidence for the rigorous evaluation of the NPC construct in an international context, research findings gathered from other countries must be regarded as ambiguous. The purpose of the current study is twofold. First, the study compares the NPC construct originally developed by Im and Workman (2004) in the Western context (e.g., U.S.) with data from Eastern context (e.g., Malaysia). Second, after a rigorous validation process, the analysis tests whether NPC affects financial and market performances in the Eastern context of Malaysia. The results offer important insight into (1) the conception of NPC and its generalizability to an Eastern context, and (2) its influence on NP performance.