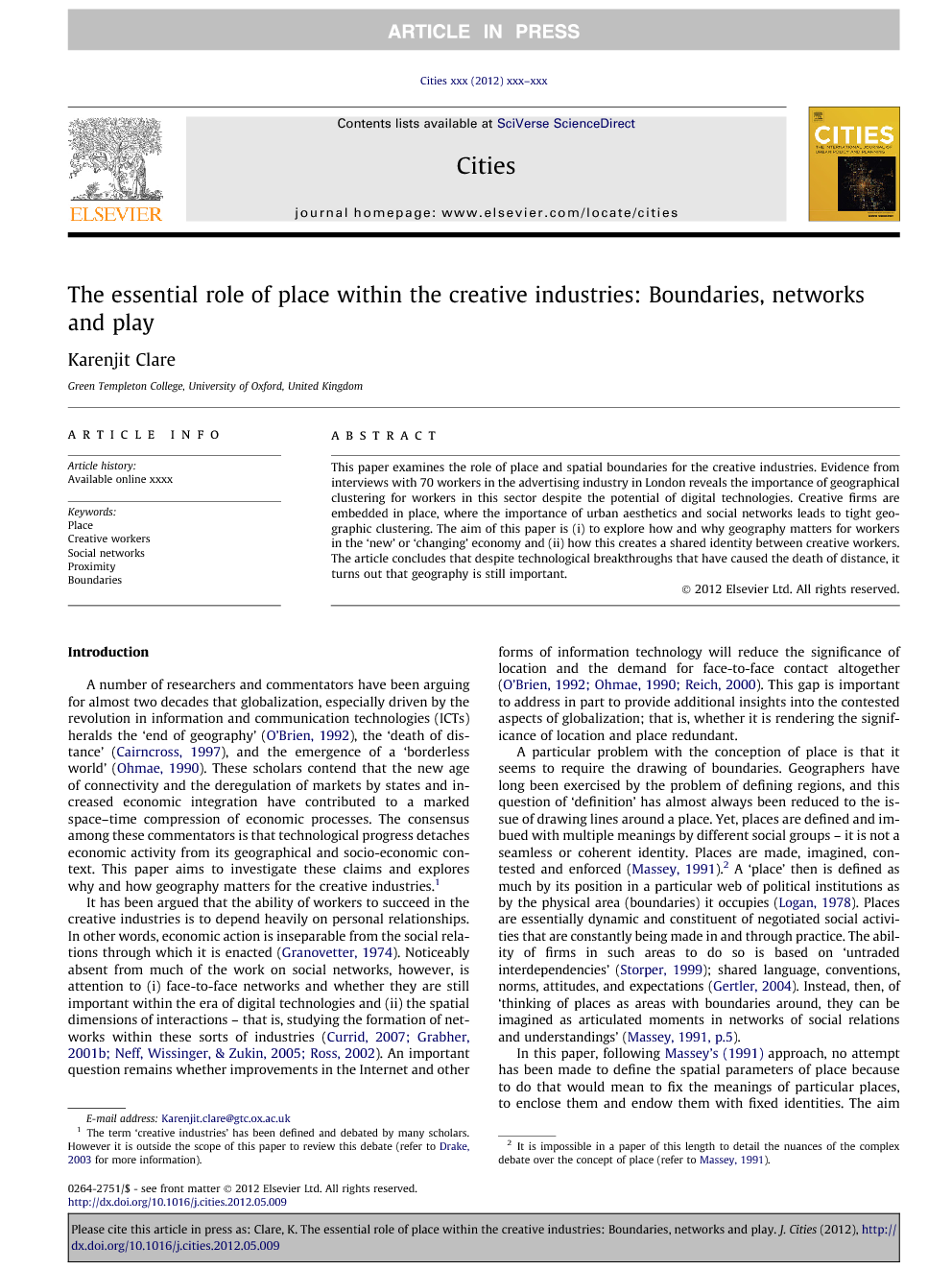 This paper examines the role of place and spatial boundaries for the creative industries. Evidence from interviews with 70 workers in the advertising industry in London reveals the importance of geographical clustering for workers in this sector despite the potential of digital technologies. Creative firms are embedded in place, where the importance of urban aesthetics and social networks leads to tight geographic clustering. The aim of this paper is (i) to explore how and why geography matters for workers in the ‘new’ or ‘changing’ economy and (ii) how this creates a shared identity between creative workers. The article concludes that despite technological breakthroughs that have caused the death of distance, it turns out that geography is still important.

A number of researchers and commentators have been arguing for almost two decades that globalization, especially driven by the revolution in information and communication technologies (ICTs) heralds the ‘end of geography’ (O’Brien, 1992), the ‘death of distance’ (Cairncross, 1997), and the emergence of a ‘borderless world’ (Ohmae, 1990). These scholars contend that the new age of connectivity and the deregulation of markets by states and increased economic integration have contributed to a marked space–time compression of economic processes. The consensus among these commentators is that technological progress detaches economic activity from its geographical and socio-economic context. This paper aims to investigate these claims and explores why and how geography matters for the creative industries.1 It has been argued that the ability of workers to succeed in the creative industries is to depend heavily on personal relationships. In other words, economic action is inseparable from the social relations through which it is enacted (Granovetter, 1974). Noticeably absent from much of the work on social networks, however, is attention to (i) face-to-face networks and whether they are still important within the era of digital technologies and (ii) the spatial dimensions of interactions – that is, studying the formation of networks within these sorts of industries (Currid, 2007, Grabher, 2001b, Neff et al., 2005 and Ross, 2002). An important question remains whether improvements in the Internet and other forms of information technology will reduce the significance of location and the demand for face-to-face contact altogether (O’Brien, 1992, Ohmae, 1990 and Reich, 2000). This gap is important to address in part to provide additional insights into the contested aspects of globalization; that is, whether it is rendering the significance of location and place redundant. A particular problem with the conception of place is that it seems to require the drawing of boundaries. Geographers have long been exercised by the problem of defining regions, and this question of ‘definition’ has almost always been reduced to the issue of drawing lines around a place. Yet, places are defined and imbued with multiple meanings by different social groups – it is not a seamless or coherent identity. Places are made, imagined, contested and enforced (Massey, 1991).2 A ‘place’ then is defined as much by its position in a particular web of political institutions as by the physical area (boundaries) it occupies (Logan, 1978). Places are essentially dynamic and constituent of negotiated social activities that are constantly being made in and through practice. The ability of firms in such areas to do so is based on ‘untraded interdependencies’ (Storper, 1999); shared language, conventions, norms, attitudes, and expectations (Gertler, 2004). Instead, then, of ‘thinking of places as areas with boundaries around, they can be imagined as articulated moments in networks of social relations and understandings’ (Massey, 1991, p.5). In this paper, following Massey’s (1991) approach, no attempt has been made to define the spatial parameters of place because to do that would mean to fix the meanings of particular places, to enclose them and endow them with fixed identities. The aim of this paper is to investigate whether advertising workers perceive that the place in which their firm is located is important for their working practices and it has been left to the interviewees to adopt the definition which they think makes sense in reaching their own understanding of the issue. Our current understanding of place and of cultural economies only scratches the surface. The value of place and its significance for creative industries requires more rich empirical work across different sectors and places.3Rosenthal and Strange (2003) have argued that studies of agglomeration need to be sensitive to ‘the micro geography of agglomeration’ (p. 388). I follow the lead of authors such as Pratt, 2000, Rantisi, 2002, Ekinsmyth, 2002 and Grabher, 2002 and others who argue that we need to understand creative activity as set within a specific context, composed of social relations. As Sunley et al. (2011) insist: ‘The value of a situated approach is that it opens up the debate on creativity to incorporate elements previously deemed marginal – such as industry and workplace context, social and cultural exchange and practitioners’ own understandings and negotiations of creativity’. (p. 378) This article is based on several types of data collection, including in-depth interviews (for an 1–1.5 h) with 70 industry workers (majority in full time permanent positions), from new hires, headhunters to CEO’s. Interviews were mostly carried out in 2007. Interviewees were recruited from advertising agencies founded between 1864 and 1995. These established and young agencies have grown to become multi-tiered corporate organizations. I interviewed mainly from three large firms (at all different levels and positions) and then I also interviewed CEO’s, managing directors from other firms (large and small) as well as industry watchers (such as headhunters, journalists, trade bodies). All interviews were recorded and then subsequently transcribed to allow qualitative analysis. Secondary sources, such as websites, blogs, government reports, trade publications and newspapers were monitored. I also ‘hung out’ in the bars, cafes, pubs that were frequented by advertising workers in London. Most of the interviews were explicitly based on the recruitment, retention and advancement experiences of employees, in which I asked them about their career development, their working practices, their individual perspectives on working, socializing and the industry in which they work. The quotations used in this paper have been fully anonymized according to the confidential agreement reached with interviewees during this research. The article is divided into three sections following this introduction. Rather than aiming for comprehensiveness in a limited space, the paper provides a detailed discussion of two themes. The first section outlines the spatial and geographical dimensions of the social milieu associated with the advertising sector and why this matters to ‘creative’ employees. Here I demonstrate the importance of ‘feel’ for creative stimulation. Second, the paper describes the significance of place-embedded social relations and I assert that proximity is paramount in this industry because of the important role of face-to-face networking. The third section examines the distinctions that are made by employees themselves about the social and spatial boundaries in which they want to work. The conclusion argues that place matters, in spite of decentralizing technology and high rent costs.

In summary, contrary to past predictions that ‘geography’ would become irrelevant in light of globalization (O’Brien, 1992 and Ohmae, 1990), this article argues that capital is not ‘placeless’. Rather, vast concentrations of people, resources and infrastructure are entrenched in specific territorial localities. One point that came through very clearly was that advertising firms in the ‘new economy’ are actually showing a remarkable degree of clustering and that geography plays an important role. The need to be in certain ‘places’ and ‘spaces’ was identified in the practices of learning, employment, as well as in socialising, relaxing or just feeling the ‘buzz’ of the city (Drake, 2003). Moreover, these interactions were commonly done simultaneously. It is important to note that all this occurs in the same limited geography, within Soho, Spitalfields and generally the East End of London. With the possibilities of ICT and particularly the internet, the compression of space–time relations was often supposed (Cairncross, 1997). Despite how easy and effortless it is for individuals to communicate across the globe, my research finds that individuals and companies cluster in particular cities and neighbourhoods for ideas, inspiration and face-to-face communication. Advertising is a highly place specific practice which is localized in urban settings, where concentrations of specialized services and institutions support this activity and where aesthetic sensibilities are built up over time. The parties, the nightlife, media and advertising employees, and so on are all sharing the same one square mile. These places cultivate the social milieu that is conducive to the production of creativity (Florida, 2002). I have shown how ‘creative’ people in London seek out not only agglomeration, but also a social milieu that fills many significant functions: interactions with other creatives groups, learning from the cosmopolitan surroundings and career advancement possibilities. Further, these usually occur during informal exchanges in social institutions, ranging from coffee bars to clubs. Put another way, economic functions are almost always happening in social contexts. This scholarship can usefully inform urban policy makers about the marked affinity between firms and creative workers for appropriate localized environments as a way to foster social relations and innovation.13 This observation is not new, but is still important. Marshall (1920) provides the first careful economic analysis of agglomeration economics, arguing that cities enhance productivity by allowing for labour market pooling, sharing and technological spillovers. More recently, the Harvard economist Edward Glaeser (2011) has argued that information technology doesn’t seem to have made physical connections obsolete: ‘To defeat the human need for face-to-face contact, our technological marvels would need to defeat millions of years of human evolution that has made us into machines for learning from the people next to us’ (p. 37). It may well be that in the near future, with rental costs continuing to rise and global competition becoming more intense, London-based advertising firms (particularly small independent ones) will not have the means of paying the high price for the ‘feel’ and local ‘buzz’, and thus will become more reliant on teleconferencing tools and internet applications. This in turn might well mean that small firms won’t be able to rent permanent offices and instead will rely on hot-desking14 in shared, open plan environments in particular neighbourhoods in order to benefit from creative transactions and network opportunities. In order to maintain these neighbourhoods, it would require a policy change on part of the government. Perhaps providing special privileges for start up businesses will be a necessary step for the future of the creative economy.15 As I have shown in this paper, the most important communications still take place in person, and electronic access is no substitute. Despite all of the drawbacks of working in an expensive, densely packed, noisy part of the city, workers felt that the advertising district’s unique geography and built environment was integral for creative stimulation and face-to-face connections. The neighbourhood still remains ‘essential to the organization and deployment of labor power and productive processes’ (Lloyd, 2006). In the case of Soho and Spitalfields in London, the locations are not only a geographic space but also a social space for events and parties and this plays a vital role in linking together workers. So the reality is that despite the technological breakthroughs that have caused the death of distance, it turns out that geography is still important.